I dropped my oldest son off at college last week. An emotional experience for sure but made more so by the fact that I unloaded his belongings at the exact same place my father helped me unload mine 36 years earlier … right outside the Quadrangle at the University of Pennsylvania in West Philadelphia. Interestingly, the Penn campus is not that different than it was in the 1980’s. There are a few new buildings in the main part of the campus but most of the new architecture is on the periphery. By and large, the area has a very similar feel as it did when I was there. Even the students did not seem to be as different as one would expect given the well-publicized supposed effort of schools like Penn to recruit and admit a more international and racially diverse student body. What struck me was how the same it was despite that so much has changed. 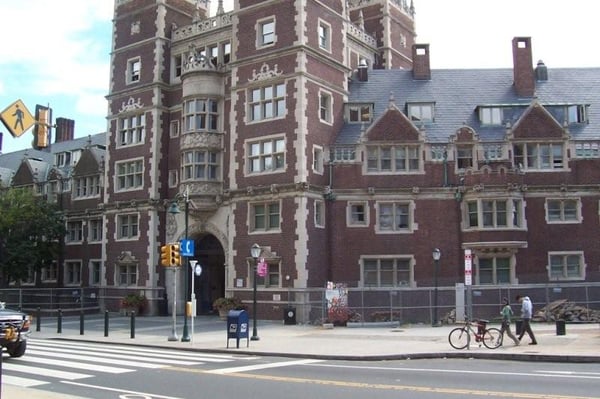 Main Entrance to "the Quad" at the University of Pennsylvania

Certainly, America has changed much more than Penn. The population of the country has grown 40% since 1983 and its racial and ethnic makeup is very different. There has been a mind-boggling change in the way we live. The early 1980’s was when most people transitioned from televisions with rabbit ear antennas to cable, the internet was nearly a decade away for most of us and pay telephones were the way we communicated when away from home. My best friend freshman year was the only student on our dorm floor who had a personal computer. I wouldn’t get my own until my first year of law school 5 years later. ATM’s were extremely rare although the technology existed. It took banking deregulation and a Supreme Court ruling that a machine was not a bank “branch” for the technology's widespread adoption.

The country’s financial situation was very different as well. Debt levels were non-existent by today’s standards although some very smart people like Henry Kaufman, Solomon Brothers’ chief economist, thought the deficits of the day were unsustainable.  GDP per capita was one quarter what it is today although only half when measured in constant dollars, which most would agree is based on inflation figures that do not accurately measure actual cost of living changes. The median family is a mere 22% better off than it was in 1984 in terms of inflation adjusted income but unfortunately many more families require two bread winners to achieve that gain. In my opinion, the most striking change is the concentration of wealth. The top asset owners and income earners take a substantially larger portion of national wealth and income than they did in 1983.  Back then, the bottom 40% of families had at least some wealth, today their net worth is negative.

In the fall of 1983, the economic boom of that decade was just beginning.  A bitter recession followed Paul Volker’s interest rate hikes designed to stem the inflation that had ravaged the economy the previous decade.  As that medicine worked deregulation, tax cuts and good old Keynesian stimulus sold to conservatives as necessary defense spending combined to usher in a strong boom.  Over the course of my time at Penn, Wharton graduates such as Michael Milken would transform the financial landscape and change the world.  During that time, a Penn graduate named Donald Trump became a national figure as he exploited the high yield bond market Milken developed financing real estate in New York, casinos in Atlantic City and other projects.

The basis of the financial theory taught at Wharton was that all asset prices were determined by the Capital Asset Pricing Model. Without getting too technical, the crux of the model is that there is a risk free rate of return that one can get for capital and that one should not invest in assets that are riskier than that asset without the possibility of a higher return commensurate with the level of riskiness. It is important to emphasize that this was not a peripheral theory of finance or even one of many important concepts upon which the Wharton education was based. It was the central truism that underpinned everything else we learned for four years. None of modern financial theory exists without a “risk free” rate. It is akin to basic math. In basic math, two plus two equals four. In finance you can invest your money at the risk-free rate, or you can do something risky with it that may lose you money, but if not, it should earn you more than the risk-free asset.

"You are a slow learner, Winston."

As per the George Orwell quote above, it has not been easy but thirty years in finance is beginning to make me sane. It is not at all clear that the risk-free rate and thus all financial theory is what it was supposed to be. The risk-free rate everyone uses is the United States Treasury Bond. Longer dated treasuries have inflation risk but are deemed by most to have zero default risk. So, for long lived assets like stocks, the risk-free rate for comparison is long term U.S. Treasury Bonds. That comparison is what calls into question modern financial theory. Since the early 1980’s when I learned the theory, the risk-free asset has been less risky and has underperformed stocks … substantially.  The below chart illustrates the outperformance of the S&P 500 over Long Term bonds by 4054% to 2483%. 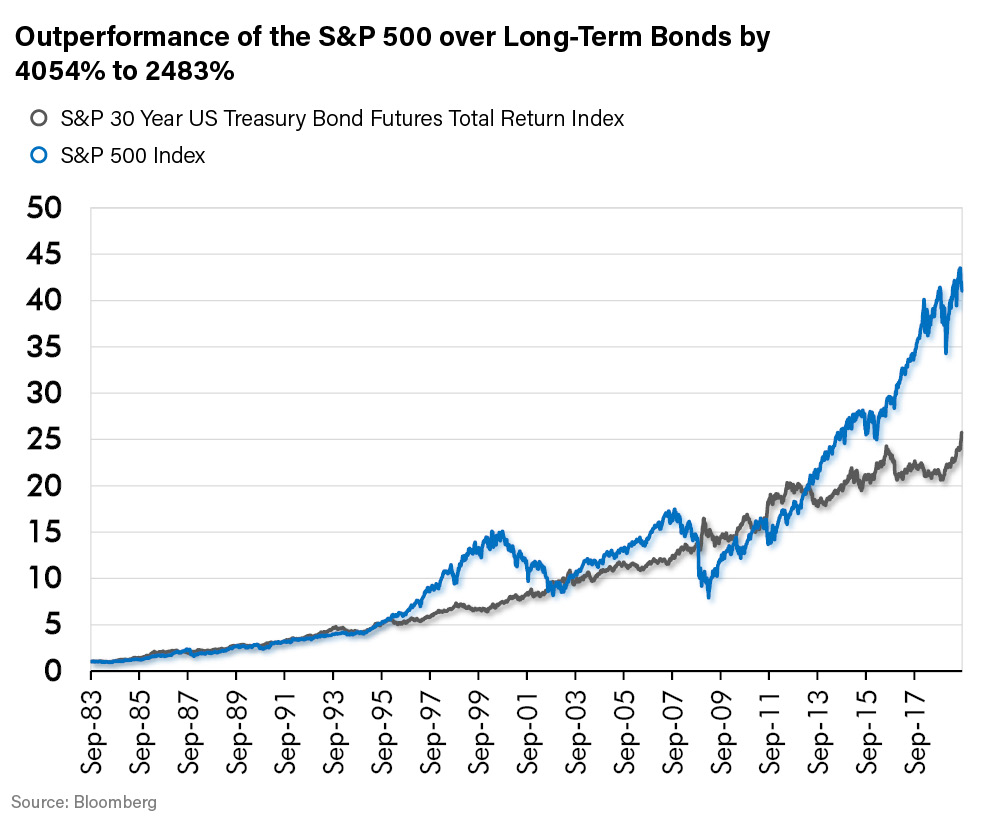 However, as is shown above, the entire outperformance has occurred over the last 6 years starting in April of 2013.  John Maynard Keynes’ famous utterance, “in the long run we are all dead” brings home the point.  Judging by the time frame starting when I entered Wharton in 1983 and ending in April 2013, anyone who invested in stocks seemed to be taking on far more risk for zero additional return unless they had a manager who could outperform the benchmark.  As has been well documented by many studies, it is incredibly hard to find such managers . . . the vast majority underperform.

In fact, looking at the period as a whole, not so many entry points favored stocks over the risk-free asset. It appears that 1996 through the dot.com bubble in 2000 was the first sustained period since 1983. Then from the low after the recession brought about by the demise of that bubble in early 2003 through the Lehman bankruptcy there was a second period. Both times the Treasury bond caught up and even surpassed the stock market. Slow and steady wins the race?

What will the Future Hold?

We are in the third such period of sustained outperformance since I was an undergraduate. Will the theory they taught at Wharton hold true this time so that at the twilight of my career fifteen years from now the riskier asset will have smartly outperformed the risk-free asset? Or, will the risk-free asset catch up once again and perhaps surpass, the riskier stock market and turn finance theory on its head once and for all?

I am far from sure of either outcome. What is clear is that the stock market has performed incredibly well for one of the longest periods on record, valuations are extremely high by most measures and a prodigious amount of debt has been added to the economy to drive growth. Combine that with the negative interest rates on an ever widening stable of fixed income assets, something that was not even contemplated as a possibility in the early 1980’s and you have a recipe for a retracement of some magnitude. At the very least, in my opinion this may not be the time to follow blindly the Wharton professors who would tell us that in the long run, stocks will outperform. Even if they are right, they fail to tell us what the long run is.

It is very nice that my son is attending my alma mater and will be exposed to some fine teachers and will get a great education. However, as Albert Einstein said, “wisdom is not the product of schooling, but of the lifelong attempt to acquire it.”  I hope my son understands that.  If I have acquired any wisdom since my college days, it is the wisdom to question whether the conventional views that are so widely believed are in fact true. Many most certainly are not as has been shown over and over again during the course of human history. Merely looking at the performance of risk-free Treasury Bonds versus stocks and the reason for the fluctuations between the two over the past 36 years leads me to conclude that it is likely a good risk management policy to own bonds as an equity hedge at this time.