A Broken Clock is Right Twice a Day (Part II)

“Gold is a great thing to sew into your garments if you’re a Jewish family in Vienna in 1939; I think civilized people don’t buy gold, they invest in productive businesses.” - Charlie Munger, Vice Chairman of Berkshire Hathaway - 2012

This is the second part of a two-part “Risk on / Risk Off” report detailing our thesis on gold. Part I, published only a few days after gold hit a new all-time high in dollars, explained the relationship of gold to central bank created money and why we think gold is likely to appreciate further. In this second part, we will examine other related factors that lead us to believe the new high is just the beginning of a new secular bull market in gold. These include gold’s relationship to interest rates, the United States Dollar, property rights and, of course, equity values.

Over the course of my career, there have been many who asserted that gold is a lousy investment. Charlie Munger, Warren Buffet’s right-hand man at Berkshire Hathaway, famously said the quote above. We think Mr. Munger is wrong and not just because smaller and lighter diamonds sewn into garments better served Jews fleeing Nazi Germany than did gold. There are however, no doubt, several reasonably sounding arguments against gold as a store of wealth. We respectfully disagree with all of them.

The strongest of these arguments is that gold generates no income. So, when compared to an FDIC backed bank account, wouldn’t one rather hold United States dollars in a safe bank account earning a bit of interest rather than gold? That argument is hard to dispute when interest rates are high. However, when interest rates are low, the argument weakens. One of the principal reasons for the Federal Reserve Board’s (FED) monetary expansion examined in Part I of this piece is to keep interest rates low to fuel the economy and enable the servicing of the large debts that encumber it. They have succeeded, thus undermining, in our opinion, the best argument against holding gold.

As the charts below demonstrate, one can see that the relationship between gold and interest rates is strong. Lower real (after inflation) interest rates tend to drive gold prices higher. Why? Because the lower interest rates go, the lower the opportunity cost of holding gold goes. 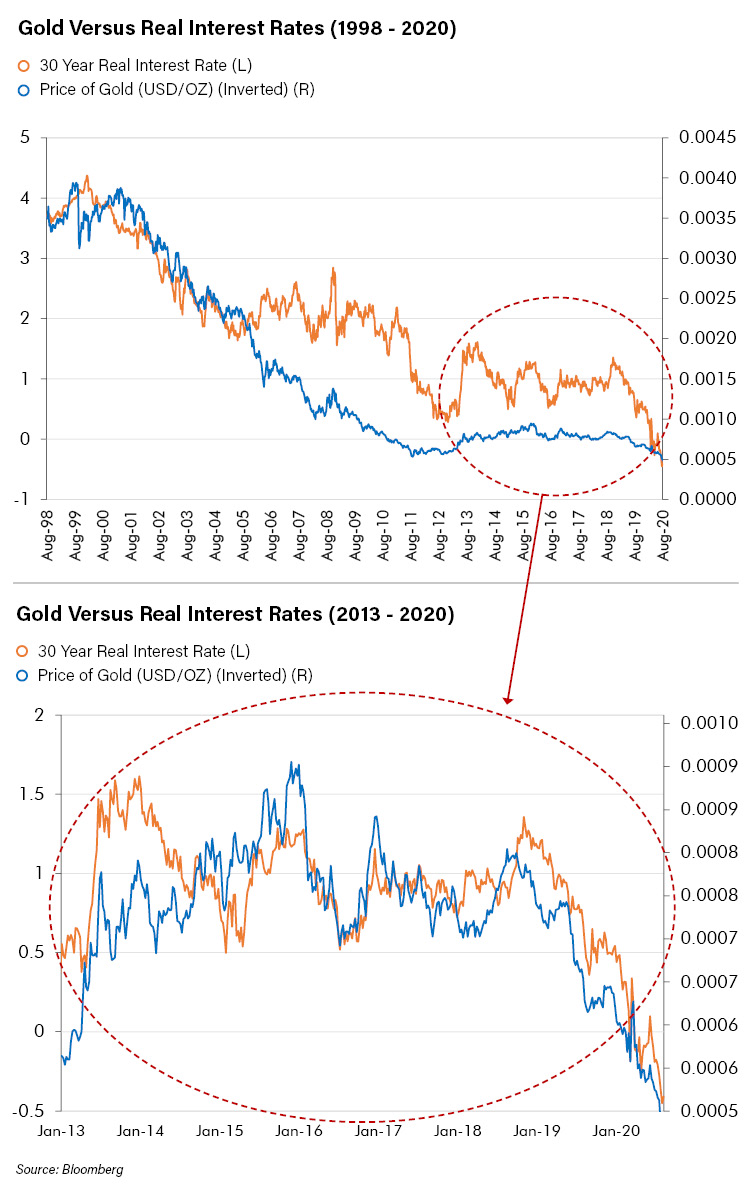 What might happen if nominal interest rates go negative? We think it’s plausible that demand for gold may increase in a non-linear fashion as negative yields grow more negative. We may soon find out. Negative interest rates entered the world in February of 2015. Since then, gold made new highs in most of the impacted currencies over the past few years. Now, negative rates may be approaching our shores with gold already trading at a new all-time high. Recently the FED Funds’ futures market was pricing in negative interest rates later this year. More recently those expectations have moved back into slightly positive territory but we think they will revert once more and there will be negative rates. A pillar of the argument against gold, that it pays no interest, may turn into a strong argument to own it.

Gold and the United States Dollar

While dollar strength has underpinned the world for the last decade - and perhaps limited the upside of gold in dollar terms - it is plausible that we have entered a new weakening phase for the dollar. Our affinity for gold would be undimmed should the dollar continue to be strong on a relative basis to the world’s other currencies for the reasons we have outlined.

Nonetheless, should the US dollar decline versus its competitors (like the English Pound, Swiss Franc, Euro, or Japanese Yen), we do think that may provide an added tailwind to the gold price in US dollar terms. So, it may well be that gold rises even faster with a relative decline of the dollar.

Gold, according to our way of thinking, is money and thus tends to trade stronger in dollar terms when the dollar declines against other forms of money. Below shows a chart of the period of 2003-2008 when the dollar weakened substantially (dollar value is inverted) and gold traded higher along with it. 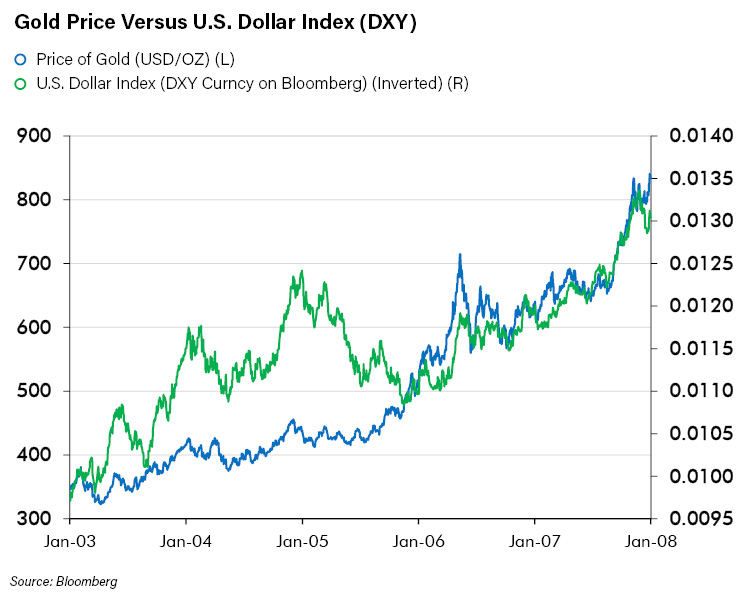 Why might the dollar weaken? For a long time the U.S. has been the least bad of most countries in terms of profligate monetary and fiscal policy. After the “all-in” response to Covid-19 this may no longer be the case. The FED has increased its money printing relative to other countries and it has increased its fiscal deficit relative to other countries. The following two charts illustrate this. With a second round of fiscal stimulus on its way through executive order or congressional action it appears there will be further U.S. “leadership” in fiscal and monetary profligacy. Worsening relative deficits often lead to weakening currencies. 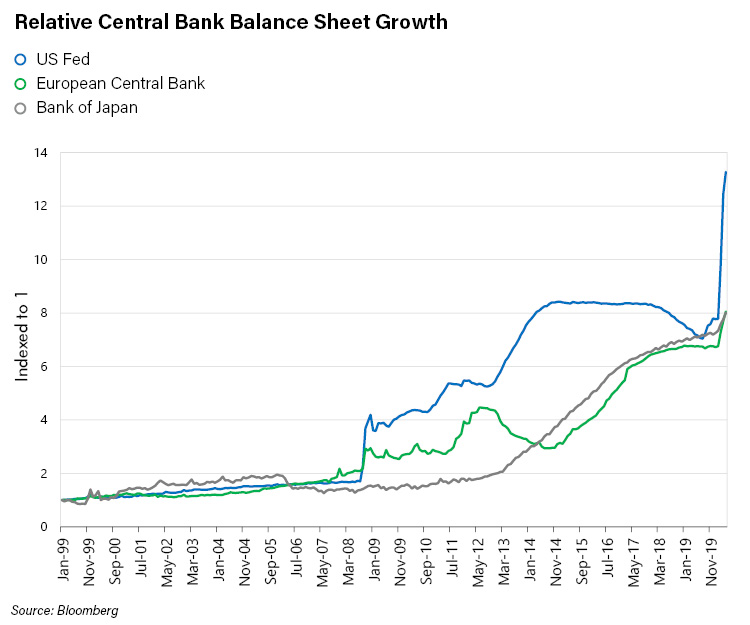 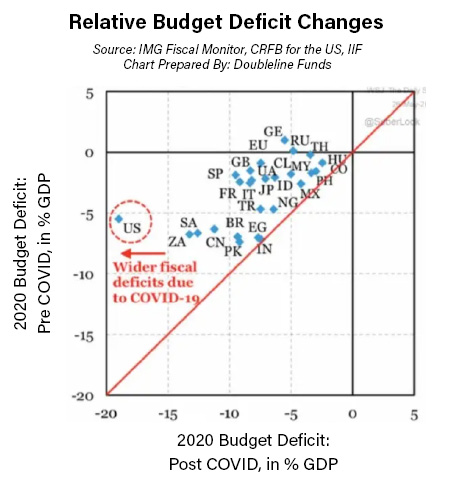 Eroding Property Rights and the Dow to Gold Ratio

We believe that history shows quite clearly that there are times when gold is better to own than certain businesses, or the “stock market” as a whole. Such scenarios include when markets are overvalued or when confidence is lacking in the future productivity of the economy, say for instance, if there is an erosion of trust in property rights or an expectation that the burden of regulation will impede commerce.

An important factor in confidence about the future is the belief that the regulatory regime and environment is supportive of contract and property rights. Should that erode, investors may begin to look for alternatives. In places where there has been an assault on property rights and calls for socialism have become more powerful, investors have tended to look for exits, including gold.

The response to Covid-19 and the recent civil unrest has, at least at the margin, raised questions about the commitment of some government authorities to property rights and protecting business. Look no further than the ongoing argument over mandating business closures by government decree. Lease payment moratorium as well as eviction and foreclosure forbearance are other examples. At the same time, reasonable people could question the commitment of certain city and state governments to prevent protests that harm their business districts.   All this, at the margin, may make some investors seek an apparent safer haven like gold, rather than the businesses Charlie Munger insists they should invest in.

Perhaps more important, is the relative value of the productive businesses versus other places to put wealth, such as gold. Even the world’s best business can become over-valued, spoiling future returns for its owners. Along these lines we refer to the chart below, of the “Dow to Gold Ratio” which is the Dow Jones Industrial Average’s value divided by one ounce of gold. It shows the relative value of the equity market to gold. In the chart you will see a long price history that shows that gold and this index of equities have historically reverted to the mean when one is very expensive relative to the other. 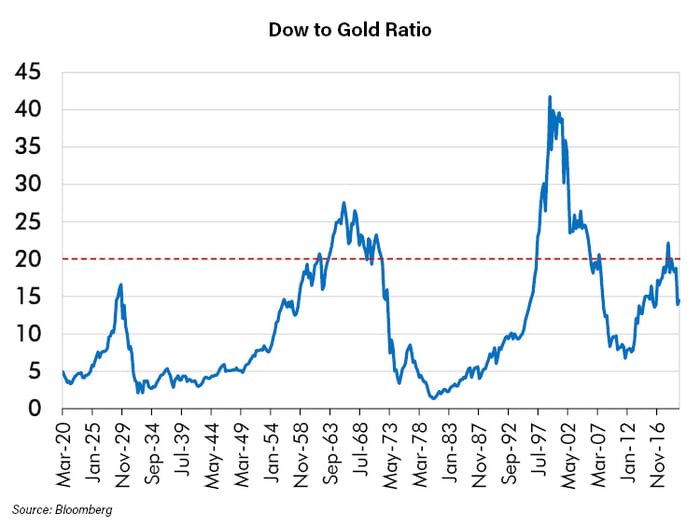 The chart above illustrates that, since 1920, cyclical waves of performance have sometimes favored gold and sometimes stocks. If we are now in a cycle of gold outperforming equities (falling Dow/Gold ratio) then we may be in for a multi-year run of outperformance. In previous cycles the ratio has bottomed as low as nearly 1. We are now at 13. It’s a long way from 13 to 1. Could we get there? We think it’s possible.

In this second part of our two part “Risk on / Risk off,” we outlined part of the investment thesis for gold, which we believe is a strong one. We are not overawed by gold’s achievement of a new high price. It feels to us like we are just getting started – particularly when we compare this price with the size of central bank balance sheets, interest rates, the value of the dollar and equity prices. In fact, we could argue that gold is cheap given where we think those measures will go in the future. Only time will tell whether we are right or wrong.

While we await the verdict, we are examining other assets that may also benefit from the same tailwinds. What other assets could embrace the changes underway in our rapidly changing world. As different and unexpected as many events may appear, we believe in the market saying that “there is always a bull market somewhere.” Right now, and we believe – for the foreseeable future – there is a bull market in gold and related investments. Our confidence in this has never been higher in our twenty plus years in the business of investment research.