If you read the financial press you frequently come across the debate of value versus growth investing. We are value investors.  The standard definition of a value investor is one who buys stocks with low multiples or low price to book ratios.  A growth investor is thought of as one who buys stocks with high multiples in the belief that the companies will grow fast.  The idea is the growth will enable the investor to be rewarded despite the lofty valuation.

The debate reminds me of the early 1980’s Miller Lite Beer campaign of Taste Great versus Less Filling.  Remember that?  Who can forget Dick Butkus and Bubba Smith, two of the greatest defensive football players of all time arguing the question in those iconic commercials?  Or Rodney Dangerfield and Bob Uecker making fun of themselves while engaged in the debate?  The point of the campaign, of course, was that Miller Lite could be both; it could taste great and be less filling.  Click the link below to enjoy one of the video ads on YouTube for yourself.

Growth vs. value is similar. Growth stocks can be both value and growth. We do not ascribe to the standard low multiple definition of value investing. Our view is that value is any situation where the assets of the company and its most likely scenario for future cash flows are worth more than its current price. True growth stocks are simply value stocks that are going to grow into being undervalued on traditional metrics. They are value stocks! They taste great and are less filling. Growth tastes great because it is inspiring to forecast that your investment will show increasing units, revenues and earnings and it can be less filling too because those things will make the company a good value according to the standard definition.

Growth Can Turn Into Value Fast Through Operating Leverage

Consider a hypothetical stock that is trading at a PE ratio of 50 times this year’s earnings with a profit margin of 5% of sales. In a scenario where the company’s costs are 40% fixed and 60% variable it would take only two years of 30% sales growth for the company to be trading at 7x earnings!  After four years of that kind of growth the company would be trading at 3x earnings!  That is a value stock. 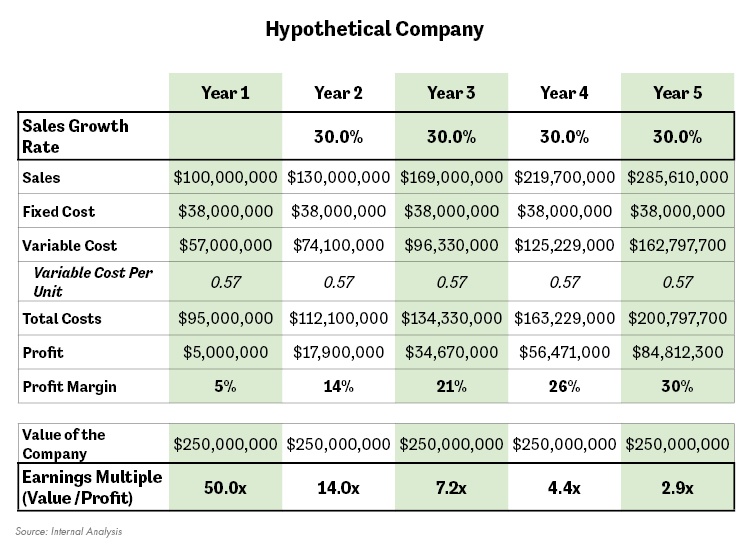 This happens because of the twin benefits of sales growth and operating leverage.  Operating leverage is the financial analyst term for the extra profit margin a company achieves as sales growth occurs.  It is driven by fixed costs. In our example above the company has $38,000,000 of fixed costs per year.  These are costs that don’t change with the volume of sales the company generates.  Such costs include depreciation on factories, interest on debt, management salaries and similar items.   A company’s variable costs are those that vary depending on the sales the company generates.  These include the cost of materials to make each product, workers who could be let go if not needed, electricity to run the factory, etc.  In the example above the variable cost per unit is $.57.  As sales increase for a growth company the variable costs go up but the fixed costs do not.  That enables the profit margin to increase.   In our example, as sales grow 30% per year the profit margin increases from 5% to 30% and therefore profits grow 103% per year! 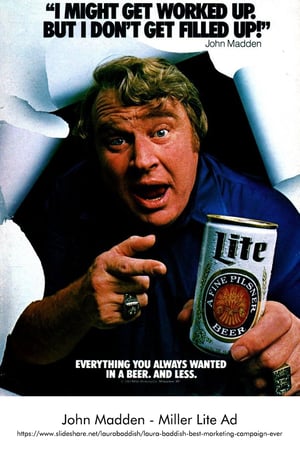 As you can see from the above example, after five years of growth and an unchanged market price the multiple of earnings the company is worth fell to 3x earnings from 50x where it started.  That growth and value sure tastes great and is less filling.  I can see John Madden busting through the wall right now to scream about it.

Amazon fell more than 10% intraday on October 25 after reporting earnings.  Its earnings missed expectations on several counts.  Given the 60x multiple of earnings at which the stock trades, investors were not happy and sold accordingly.  One of the main drivers of the disappointment was the slowdown in sales growth from around 40% year over year to “only” 35%.  My colleagues have recently written on the concept of expectations driving stock prices in the short term. Expectations were not met so the stock fell.  However, to this analyst, there was a lot to like about the Amazon report, particularly as it relates to its ability to grow into its valuation.

In the early 1980’s when Miller Beer was airing its Tastes Great/Less Filling campaign, Jeff Bezos was in college at Princeton University.  It was nearly a decade before he was to start Amazon.  Today it is the third largest company in the world with a market capitalization of over $800 billion compared to $13.7 billion for the Molson Coors Brewing Company, the current owner of the Miller Beer brands.  Amazon is a very large company yet it continues to grow sales at a torrid pace.  For a company of Amazon’s size to grow 40% per year is really hard.  Five years of growth at that rate would mean that the company would reach sales of greater than 10% of the entire United States economy.  Expectations for that kind of growth over the medium term are not realistic in our opinion.  However, sales growth of 35%, or even 25% would not be too shabby.

Despite its sales growth, Amazon has not been a company with a stellar track record of converting sales success into profits and cash flow.  There were many years of tremendous growth with little or no income to show for it.   Perhaps the profits would never come and Amazon would never be able to justify its lofty valuation?   As Amazon finally began to generate some profits, skeptics on the stock noted that most of the profits were earned by the Web Services segment, not the online retailing business that most people consider to be Amazon’s main business.  This was true.  In 2017, Web Services made $4.3 billion in Operating Income while the rest of the company lost $225 million.

However, this past quarter was interesting in a positive way despite the apparent disappointing reaction of the stock price.  One could argue that Amazon is an expensive stock whose growth can quickly justify its valuation.  Perhaps Amazon tastes great and is less filling?

The most recent report seems to add evidence of a solid upward trajectory that, if it were to continue, could lead to the current stock price looking cheap in retrospect.  True, sales growth decelerated to 35% year over year from an average of 42% over the past four prior quarters, but it was still well above the 29% average in 2016 and 2017.   Thirty-five percent revenue growth for a company that size is nothing to be ashamed of.  Even a decline to the 25% range would enable the company to grow into a very reasonable valuation in just a few years.  Furthermore, operating margin trends in all its businesses appear to now be moving in a positive direction.   This is a big change from just a year ago when operating margins in all three of Amazon’s main reporting segments, North America, Europe and Web Services were dropping.  Now they are rising as indicated in the chart below. 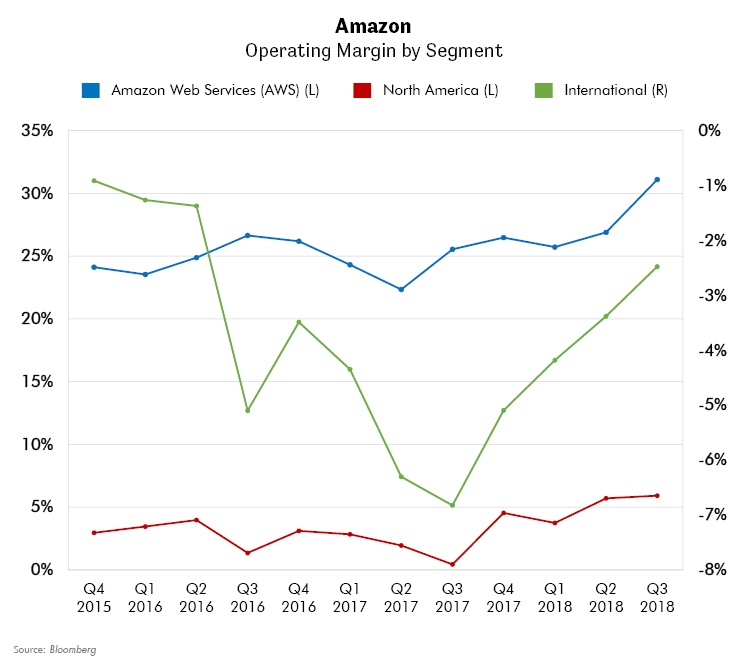 So, Amazon may very well taste great and be less filling.  Its current high valuation may fall in the coming years by a continuation of strong growth trends.  Even if sales slow down to 25% per year for the next few years and as long as profitability trends continue, it is not inconceivable that Amazon trades at below the market multiple after only three more years of that kind of growth.   In order to get to that valuation one merely has to show a bit more operating leverage in the North American segment, Europe’s margins reach North American levels, and flat Web Services segment margins.

Life is often about trade-offs.  Food (or beer) usually tastes really good or is healthy for you, not both.  Thus the genesis of the Tastes Great versus Less Filling ad campaign.  Miller wanted to convince you that you could have both.  In investing generally, there is a tradeoff between risk and reward (although one of our principal tasks as investors is to try to find investments where one can get a greater reward for a given level of risk).

Value versus growth investing is different.  No serious investor is not a value investor.  However, the true worth of certain growth stocks can be far higher than their current value even though on traditional metrics that may not seem to be so.  There is no trade-off between value and growth; as investors we just need to understand whether the current price of high multiple stocks reflects realistic growth and profit expectations.  That is a task that is extremely hard but is what we get paid to do.