Dental Companies Have Had Some Teeth Knocked Out

It’s good to be back in Naples after spending three weeks in the Northeast driving my teenage boys around to hockey showcases and then dropping them off at their respective schools which they chose primarily for their hockey programs.  These days, hockey players are required to wear face masks so teeth injuries are rare. Thankfully my boys, despite over a decade of playing, still have theirs intact.

Most everyone who was a sports fan in the Northeastern United States and Canada in the 1970’s remembers the Philadelphia Flyers hockey team, also known as the Broad Street Bullies, who gooned their way to two Stanley Cup championships in the middle of that decade.   The image of the team, captain Bobby Clark’s toothless grin, epitomized the danger that sport held for one’s teeth which were regularly knocked out by errant pucks, sticks and the not uncommon deliberate punch to the face. 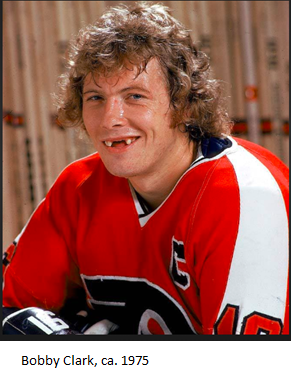 No doubt hockey players spent a lot of money at the dentist office.  However, perhaps not coincidentally, right around the same time the Flyers were raising their Stanley Cups, the governing bodies of hockey in the United States and Canada were instituting rules requiring amateur hockey players to wear face masks up to and through college.  Fortunately, despite their high spending on dentistry, the resultant bear market in tooth injuries for hockey players did not impact the overall dental industry.

This month’s Risk On / Risk Off report is going to delve into dental stocks, which we believe may present attractive opportunities for investors.   Importantly, we will discuss the difference between secular change that leads to obsolescence and secular change that creates a new paradigm but leaves the industry intact.  Recognizing the distinction and properly timing entry into companies that are in sectors undergoing change can be very lucrative to an investment portfolio.

No matter how cheap a company might appear, chances are if it is participating in an industry whose product or service is becoming obsolete, it’s a bad idea to invest in it.  Buggy whips are the most often described product illustrating obsolescence.  Buggy whip demand collapsed to near zero when the horse drawn carriage was replaced by the automobile.   In the recent past, a prime example is newsprint, the paper on which newspapers are printed.   On several occasions, when in the late 1990’s and early 2000’s bad news came out and the stocks swooned, value investors got excited over the “cheapness” of newsprint companies.  Most understood that newspaper readership was in a secular decline due to the delivery of news over the internet. However, they appear to have misunderstood the magnitude of the ultimate decline.  Newspaper readership was going to decline by more than 50% and thus half the factory capacity to produce newsprint was obsolete.  The collapse in demand caused the bankruptcy of several newsprint companies so there was no entry point at which value investors made money- the assets became completely worthless.

Were hockey players the only ones needing dental care, perhaps the introduction of the facemask in the 1970’s would have made dentistry (or at least tooth replacement) obsolete.   However, hockey players are far from the only people with teeth problems.  Dental care and spending on dentistry can go through changes, but it’s safe to say it’s not likely to ever become obsolete!  In fact, dental problems increase with age. I can attest to that as someone who never had a cavity until my late thirties.  Since then, I’ve had three root canals and too many cavities to count!  So, as the population continues to age, the need for dental care should increase.

Nevertheless, dental spending has been soft for the past half-decade.  According to a report by Stifel Financial, dental expenditures in the United States outpaced GDP growth in 22 of 30 years between 1980-2009 but trailed GDP growth in 5 of the 6 years between 2010-2015.  Sales of dental equipment and supplies particularly have been capped as illustrated in the chart below. 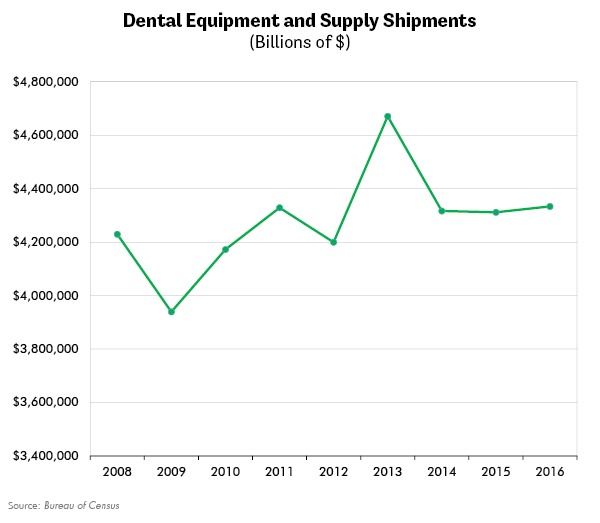 It appears that the pressure on the dental market may be coming from several areas.  First, the proliferation of CAD/CAM dentistry (computer-aided design and computer aided manufacturing) is making the delivery of dental products and services more efficient thus cutting down the use of consumables.  Second, after a surge in capital expenditures by dentists to buy the CAD/CAM systems, overall equipment needs are lower.  Third, dental insurers are clamping down on reimbursement for many procedures shifting a greater burden onto patients who are choosing to forego those procedures rather than pay out of pocket.  Fourth, the proliferation of Dental Support Organizations (DSO) and Group Practice Organizations (GPO) are putting more purchasing power in the hands of the dental practices who are the customers for dental products.  Fifth and finally, online vendors are biting into sales and causing pricing pressure especially for very generic products and consumables.

ARE WE NEAR THE BEGINNING OR THE END OF SECULAR DECLINE?

We believe the pressures noted above have caused earnings to decline at most of the dental companies and forward estimates have declined materially.   The equity prices have followed to the point that valuations for some of the sector’s best companies are near 25-year lows.  For example, the relative price to earnings and price to book ratios for Patterson Companies (PDCO) illustrates this in the chart below.

At the same time, it appears, despite the pressures on the industry, free cash flow is still enabling the strongest companies to pay hefty dividends or buy back shares.  Strong balance sheets further add to financial stability.

As researchers who have been at it a very long time, we understand how difficult it is to time investments and industry trends.  We do not know when the pressure on dental company sales will abate, but we believe the dramatic valuation declines shown above suggest that there is quite a bit of bad news priced into these stocks.   We do our best to figure out the timing of when the secular pressures might subside, but the future is uncertain.  However, we strongly believe that dental equipment and consumables are not becoming obsolete.  If we are correct, then the bad near term expectations may have created an attractive entry point for valuation driven investors like us.  We believe a lot of bad news is already priced in to the stocks, and should the news continue to be bad but slightly better than expected, we would not be surprised to see prices rise quickly.  Valuation is the key tool we use to determine the entry point.  A good dividend yield or stock buybacks supported by a strong balance sheet enable us to be paid while we wait.

After a multi-year bull market that has driven valuation to high levels, our research team is vigilantly looking for opportunities that carry low risk and ample reward.  A fertile area for searching is among sectors that have been hurt by identifiable secular change but whose underlying business remains sound and will be likely to recover once the change has run its course.  When such a company is in an industry that is likely to be resilient during economic weakness or the next recession, such as healthcare, there is additional impetus to own it because it can help our portfolios be more defensive as we get deeper into an aging economic cycle.

As value investors, we believe we are not doing our job right if our investments are not controversial.  Almost all of the ideas we become interested in appear to have something wrong with them – that is why their valuations are attractive!  Some of the best ideas may be found in sectors that have been pressured for identifiable but transitory reasons.  The difficult part is to understand whether a negative secular trend will cause obsolescence or merely re-adjustment and whether the bad news from that trend is already priced in the stock.  If obsolescence is ruled out, valuation becomes our guide when making these investments.  The cheaper the stock gets, the more likely investors are to have limited downside and rewarding upside.  Good balance sheets and free cash flow that can be returned to shareholders helps to alleviate risk as well.  With that in mind, we think certain dental companies may be good investments that may help investors achieve their investment goals.