One might have to go back all the way to Abraham Lincoln’s time to find a period in American history when the country was as polarized as it is today.   No doubt watching the impeachment hearings last week bears that out and shows that there is something to Sandburg’s admonition.  Certainly, many lawyers follow his advice.

No matter which side of the debate you are on in that controversy, it is hard to dispute that we have a lot of good lawyers in America.  Both the counsel for the Democrats and Republicans, as well as many of the representatives (most of whom themselves were lawyers), are extremely sharp men and women who were able to quickly pounce on inconsistencies and weaknesses in the other side’s arguments.   I for one was confused by who had the law right, who had the facts right and who was just screaming like hell.

Back in the 1980’s, Ronald Reagan’s economists argued that government was too big and intrusive, yet they implemented spending increases (and tax cuts) that made the federal budget deficit explode, at least by standards of the day.  Other economists, supporting Reagan’s opponents warned of all sorts of ominous results that would follow from these high deficits, most notably the reasonable fear that the government’s demand for credit would cause interest rates to rise.   Nevertheless, for most of the 1980’s and early 90’s as deficits rose, interest rates fell. 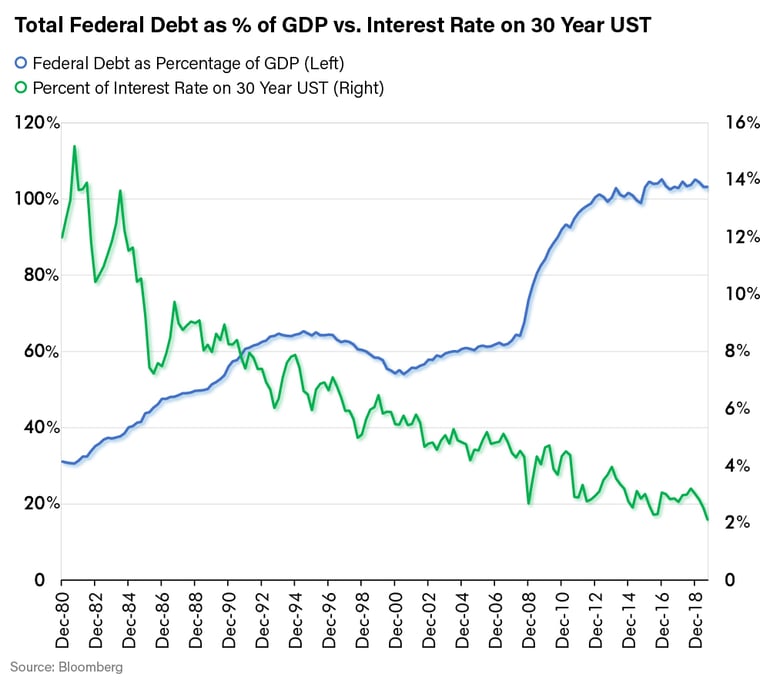 In the early 1990’s it seemed that those economists might be right as interest rates steadily rose from 5.4% to nearly 8% in 1994 and 1995.  The Clinton administration realized its future was dependent on stemming the increase.  It was during this time that James Carville, the Clintons’ strategist famously quipped, “I used to think that if there was reincarnation, I wanted to come back as the president or the pope or as a .400 baseball hitter. But now I would like to come back as the bond market. You can intimidate everybody.”  Thereafter deficits began to decline helped substantially by higher tax revenues from an economy in the midst of the internet boom and some moderation in spending growth.  Interest rates have continued to decline ever since, albeit with some brief pauses, despite the fact that deficits began to rise again and have reached heights that would have been unthinkable during Ronald Reagan’s time.

How can this be? We are going to argue here that economic growth cannot be limitless when its current driver seems to defy either theory or the numbers (or both) that the economists claim.   Recall that economic growth is defined as growth in Gross Domestic Product (GDP).  In turn GDP is defined by the following formula:  Y = C + I + G + (X-M) where “Y” is GDP, “C” is consumption, “I” is Investment, “G” is government spending, and “(X-M)” is net exports, i.e., exports minus imports.   This measure of the wealth of a country is widely accepted by not only economist but politicians, the mainstream press and just about everyone.

There is a big problem with it though from my perspective, especially when combined with rising deficits that are not constrained in any way (such as by rising interest rates).  The G can be set at whatever number our politicians want so long as they can come up with the money to spend.   Thus, Y (GDP) can seemingly never go negative if the government borrows and spends enough to keep it that way.   That is what we observe happened in the past decade since the Great Financial Crisis.   Since the end of fiscal year 2009, GDP growth has been $6.9 trillion while federal debt growth has been $12.7 trillion.  That is a difference of $5.8 trillion dollars.  So, G has grown more than Y, which means the rest of the economy has remained in a recession!  The chart below shows the breakdown by year going back to 2002 which was coming off of a recession year. 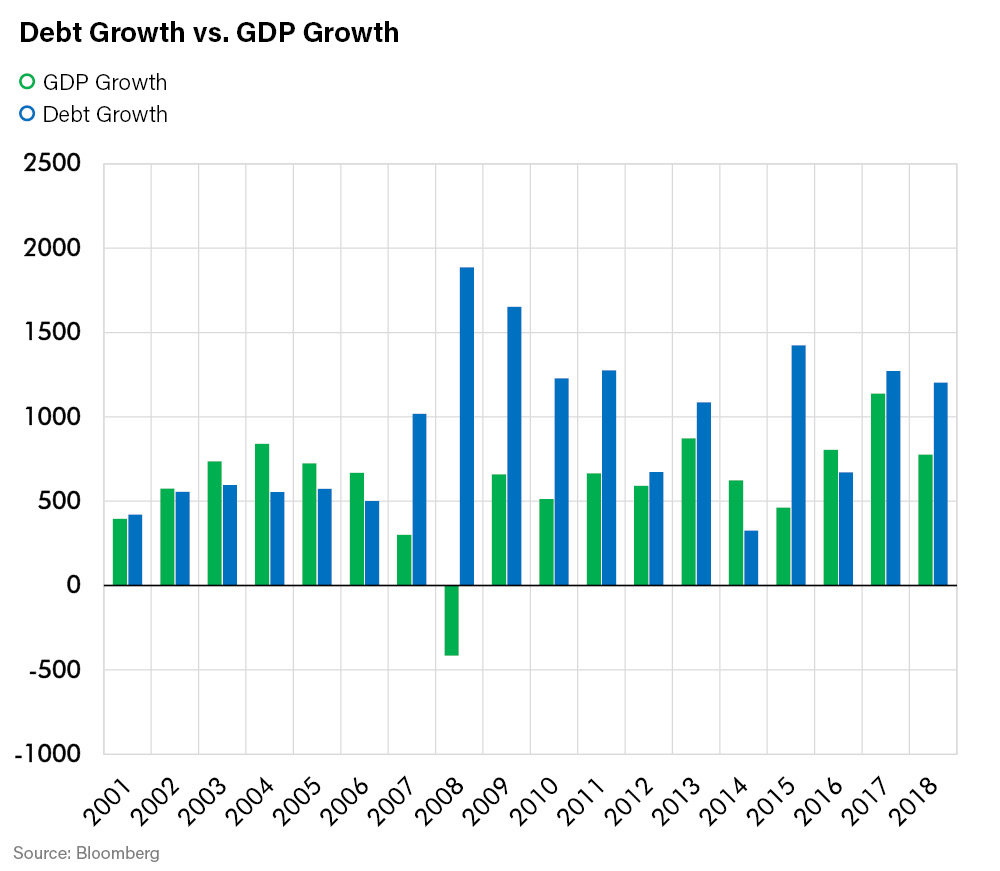 Keep in mind that traditional Keynesian economics acknowledged and attempted to use the mathematical fact that Y could always be made to grow by increasing G.  However, Keynes thought of this as a smoothing mechanism.  In times when C, I and (X-M) might throw the economy into recession, G could be called upon to save the day.  However, Keynes did not contemplate a world in which the government could borrow indefinitely with no negative consequences.  He thought the government would borrow and spend during slowdowns to mitigate recession and then pay down debt when such spending was not needed in order to reload for the next cyclical downturn. Looking at the chart above, this does not appear to be the way things have been working recently. The private economy has not been able to grow GDP and thus more and more debt has been needed to stave off recession. Perhaps the Great Recession never ended?  Instead of the soup lines of the Great Depression do we just have the government handing out more and larger checks?

Are there any constraints on this continuing?  The part where both the theory and the numbers seem to be most perplexing is when you realize that the Federal Reserve Board’s (FED) printing press is what enables this.  The lender of last resort truly is the lender of last resort not only as is commonly thought - to provide liquidity in a crisis, but also, it appears, when money is needed to keep GDP growing.  The Fed has absorbed over $4 trillion of the above-mentioned $5.8 trillion of new debt that was required to grow the economy.  It takes on that debt by creating money out of thin air (or by keystroke on the FED balance sheet computer).  When money was backed by gold this would not have been possible, but in a fiat system there are few constraints.  As long as the FED can and is willing to do that, recession can be avoided indefinitely, at least in nominal terms.

We have shown here that the economic theory and the numbers can work to “grow” the economy as long as the FED can create FIAT money to enable the government to borrow and spend.   However, is that real economic growth? The kind that enables people to feel better about their current and future economic prospects?  It most likely doesn’t feel that good to the many people in the part of the economy that is not on the receiving end of the “G” described above.  Perhaps that is why vast numbers of people seem to think the economy isn’t nearly as good as the numbers indicate?

It would seem that the theory or the numbers need to be brought back into line.   We are not sure how this will happen, but it is likely to. Perhaps politics will constrain the FED from buying debt, perhaps the government spending will go into a part of the economy that creates the traditional kind of inflation and thus interest rates will be forced to rise (see T&TR from last week), perhaps major foreign holders of the debt will be forced to sell or perhaps some other transmission mechanism will arise?  What we believe is a change is likely to come at some point. In the meantime, we monitor the situation and attempt to make the best portfolio allocations available to keep growing the capital we steward in a market that continues to make new all-time highs.  All the while we are under no illusion that something is likely amiss in either the theory or the numbers that many economists are touting as evidence that the economy is in great shape.