Risk On / Risk Off: First Edition

My name is Zev Abraham. I am our organization’s Director of Research. Over the coming months and hopefully years, I will be writing a column to add to our reader’s understanding of the investments we discuss and the economic, risk and other factors that come into play in our investment decision making.   However, before embarking on the “how” let me first explain the “why.”  This is my story.

Lessons from the Carpathian Mountains

My father’s life was a constant struggle for survival until he arrived in the United States in 1956.  He grew up in a small town in the Carpathean Mountains just before World War II in what was once known as Czechoslovakia.  Today the town is located in the Ukraine.  My father is a holocaust survivor.  So were two of his sisters.  Most of the rest of our family was not as fortunate.   They died in the Nazi’s concentration camps.

The portion of Czechoslovakia in which my family lived was transferred to Hungary, an ally of the Nazi’s, in an agreement brokered by Hitler in 1938.  After that, the newly formed Slovak Republic fought what is known as the Little War with Hungary several months before the outbreak of World War II.  A small portion of the Carpathean region left Slovak control and was transferred to Hungary.  This was good for the Jews of the area because Miklos Horthy, the leader of Hungary during that period,  prevented Hungary’s Jews from being deported to concentration camps.

Miklos Horthy joined the axis because he was a Hungarian nationalist who thought siding with the Nazis was the best thing for his country.  By late 1943 he realized the error of that decision and began secret negotiations with the allies to drop out of the war.  In 1944, when Hitler discovered Horthy’s betrayal, the Nazis invaded Hungary and took over its government.

Hungary’s Jews (and Romas too) were immediately rounded up and sent to concentration camps.  They suffered immensely with an estimated 450,000 to 600,000 murdered in just a few months.  My father and his sisters were three of the lucky ones whose lives were spared.  Sadly, my father’s struggles were only beginning. 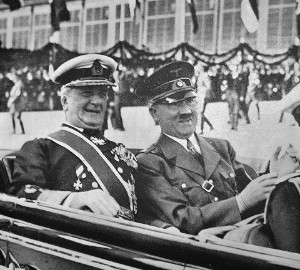 Soon after the war when he tried to sneak into British ruled Palestine, the boat he was on was intercepted by the Royal Navy and he and its other passenger refugees were taken to Cyprus where they were kept by the British for nearly a year.  In 1947 he finally made it to Palestine, which quickly became Israel and he found himself fighting for his survival again during the 1948 War of Independence.  Interestingly enough, despite all the risks my father endured, he remained an optimist who did not run from risk – first by coming to the United States and then by starting a business.  The business succeeded. He was able to build a life for himself and his family.  He achieved, despite his awful beginning, the American Dream.

Growing up the child of someone who had been through all that was different. While most of my friend’s family dinner chatter centered on baseball or what happened in the latest Brady Bunch episode, my family dinner conversation was of geopolitics, mostly about the Middle East and if the next war could be at hand.  It was sobering.

Similarly, in school when our history books spoke of racism and persecution, these were not mere words to me.  I had been woken up many times to my father’s screaming nightmares, as he tried to shake the demons of the past.

My formal career on Wall Street began as a junior securities attorney at a New York law firm that handled IPOs and other public and private offerings.  As a twenty-four-year old just out of law school, I spent the next three plus years writing prospectuses and other documents.  It made me wonder: are the companies and securities for which I was writing documents and disclosures good investments?  This curiosity led me to the next step in my investing journey, earning my MBA from the University of Chicago.  That academic work set my feet firmly on the path to an investing career.

I would build upon this academic training with practical experience.  To me, one of the most important of which found me working with brilliant professionals at one of the first ever commodity equity hedge funds to roll out of Julian Robertson’s fabled Tiger Management.  This was a formative experience to develop a robust investing toolkit that I still use every day.

Nevertheless, when I look back over what I have learned and what has resonated in my thinking it is the childhood experiences I had and the family lessons passed down from generation to generation that had more of an impact than any technical training.

The Development of an Investment Philosophy

My father’s experience taught me that there is risk in the world and, to combat it, you must pay careful attention.   However, just as my father learned, I came to believe that risk can be overcome – but only with diligence and vigilance. This is a good foundation for investing in an uncertain world.

His experiences passed down to me made sure the vagaries and extremes of human nature were always at the forefront of my thinking.  How quickly the world could change – and how challenging it was for many to understand the spreading ripples of that change in our world.  How so many could have avoided such pain and suffering – if only their understanding of unfolding events had been more clear.

World War II claimed so many lives, including millions of German citizens and soldiers.  Many who numbered among the fallen were not “evil Nazis” but simply ordinary people worried about their own future and that of their children.  What I think, in retrospect, they would have wanted to understand better was the tragic human capacity for error among their leaders.  They had been taught that “the authorities” knew better.  Good citizens were those who followed the lead of their government.

And after all, so many signs suggested that Hitler was succeeding at making Germany great again.   The eternal investment yardstick of “the market” seemed to agree.  Measured by that yardstick, many German citizens could have argued that they were headed in the right direction in the 1930’s.  In fact, the German market hit a new high as late as 1942 – even after the invasion of Russia which would ultimately prove to be so disastrous. 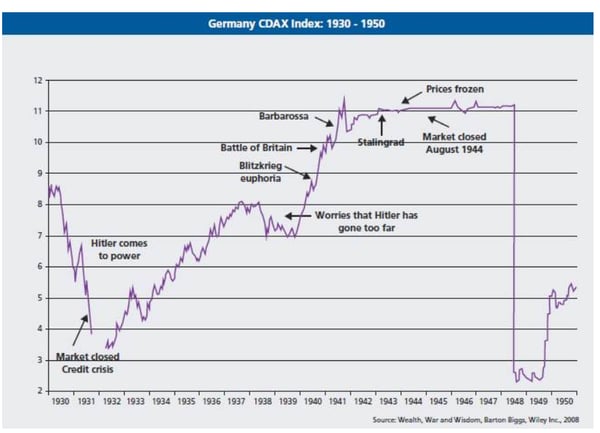 Of course, we know how it all ended.  The leading political authorities of the day, the Nazis, had it all wrong.  There would be no thousand year Reich.  Rather the reality that awaited Germany’s expectant citizenry was the devastation of total war, the ruin of hyperinflation, and four decades of humiliating dismemberment at the hands of the victors.

The point is that blind faith in anyone’s “Authorities” has been proven to be less than ideal on that and many other occasions. Yet in our current over-indebted world we must rely heavily on our authorities and their experts to make good decisions, especially when it comes to the economy.  Keeping a keen eye on whether they continue to “get it right” must be part of any serious exercise in wealth preservation.

As part of our effort to build the most effective investment team possible, we have taken great pains to ensure the individuals on our team have diverse backgrounds and viewpoints.  Why?  Because today’s uncertain markets demand fresh and holistic thinking that can only come from having bright minds who are seeing the world differently – and voicing their views.

“Group Think” is particularly toxic in investing.  It is much too easy for a research department to feed into an existing investment mania.  However, in certain areas we all should always agree:  to come to independently derived conclusions on our research and to always keep safety in mind before placing our clients’ hard-won money at risk.  This underpins all our research as it is the policy set by our Chief Investment Officers and infused throughout the organization.   Having personnel who innately understand that through life experiences certainly helps.

Going forward, I would like to use this piece as an opportunity to share my voice and perspective with you, with particular emphasis on investment decisions, their genesis, and our thinking behind them. I hope you will read it, find it interesting, and give feedback to make it more useful or to point out flaws that might help us do our job for our clients even better.  •