It rains a lot in Southwest Florida this time of year and the rain is heavy. When you get caught without an umbrella you can get drenched in a few seconds running from a car into a building. My completely unscientific assessment is that in the average summer rain in Naples you get drenched in half the time as an average New York City area rain. It rains nearly every day. The reason for this apparently is that Collier County and all of South Florida is on the edge of the Everglades and is part of a transition zone between a subtropical and tropical climate zone. These areas are characterized by summer rainy seasons which, in the Northern Hemisphere, are between May and October. Intense daytime heat in these months causes the moisture from the Everglades to rise into large cumulus clouds and then, typically around two pm, release back to earth in thunderstorms that are intense.

It’s a good idea to have an umbrella with you when you go out in the area during the summer. Capital Wealth Advisors’ Naples office has several available for use. They are in an umbrella holder to the left of the elevator when facing it. No one has ever explained to me the rules for those umbrellas as somehow the holder is continuously restocked despite being emptied regularly, especially in the summer.  It’s obvious, given that our clients come first in everything we do, that they are for our clients’ use when leaving on a rainy day without one.  They are very smart looking with our logo and in our firm’s shade of navy blue and thus not only keep our clients comfortable but also serve to advertise our brand!

A margin umbrella is a term that is used to refer to the way a company’s margins and therefore profits are protected. It is a cover that may prevent profits from going negative and, in certain conditions can help profits increase.

A margin umbrella is closely related to the concept of an industry cost curve, which we have explained in a prior Risk on / Risk Off report. It is the supply curve that many of us learned in freshman college economics.  At higher prices an industry will supply more goods. The curve slopes upward and to the right when price is on the vertical axis and quantity on the horizontal axis. The curve looks like this because some industry participants have lower costs and can make a profit at very low prices. As the price of the good rises there are more firms that can make a profit and hence more goods are supplied at higher prices. 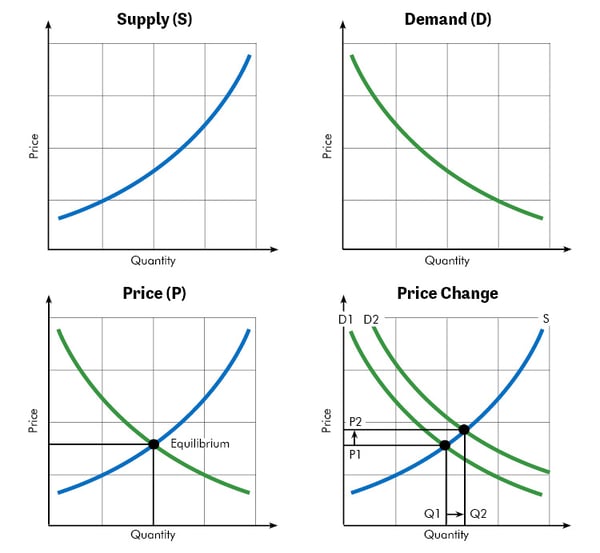 What is it that makes one firm have the lower costs compared to another that give it the benefit described above?  It is these advantages that create the margin umbrella.   Those items that are very costly as a percentage of total costs create the greatest advantages and meaningful umbrellas should one firm have a cost advantage in that item.

Aggregate companies are a great example of this concept.  Aggregates are the crushed stone that is used in making concrete and asphalt. Aggregates are produced at stone quarries where the stone is dug or blasted from the ground and then crushed by stone crushing machinery.   When done at high volume, the cost per ton of such an operation is not very high. It’s a commodity business with a very cheap raw material, stone, which is found virtually everywhere. However, once produced, the product is very heavy and therefore expensive to transport.  So, a quarry that is located close to its customers has a large cost advantage. Also, quarries are very difficult to permit. They are dusty, noisy, unsightly and put strain on local roads. So, often there is not any local competition. A rock quarry will usually be the lowest delivered cost producer in its vicinity. The transportation cost advantage is an umbrella under which a local quarry can price and be profitable.

Another sector where we find an important margin umbrella is the utility industry. Utilities produce electricity from different inputs such as coal, nuclear, natural gas, hydroelectric and others. A few months ago, we wrote about one of those inputs, natural gas, and why we think it’s likely to move up in price in the future. Since then its short-term fluctuations have not moved in our favor but, as our regular readers know, we are not short- term investors. We continue to have a favorable long-term view on natural gas. The fuel is an important part of the utility story.

Producing electricity has two principal costs: the cost to build the power plant and the cost of the fuel to run it.  However, once the plant is built, its cost is pretty much fixed. Whether or not to produce an extra kilowatt of electricity becomes purely a function of the variable cost – the cost of the fuel. Below is a picture of Morgan Stanley’s recent view on the electricity cost curve, which is a supply curve we described above. It slopes upward and to the right indicating that more electricity will be supplied when its price rises.

The chart above also shows the daily demand curve.  It is shaped in this non-traditional way to show that much greater demand occurs during peak hours than off-peak parts of the day. The chart shows that for much of the day, supply and demand cannot be satisfied without natural gas plants. That means electricity must be priced high enough to entice gas generation plants to operate. In order for that to happen, the electricity price must be greater than the gas input cost. So, when the price of natural gas goes up the price of electricity must go up. Those electricity generation facilities that use natural gas may not profit because the price of electricity will likely only rise to cover the cost of gas. However, those who make electricity using other inputs, such as very low variable cost nuclear or wind power, should profit from the higher electricity price.  Those plants, are another example of businesses with a margin umbrella. The lower cost nuclear plants can profit from higher natural gas costs. As those costs go up, the “umbrella” gets “higher” and low cost plants benefit more.

As the chart above shows, nuclear, hydro-electric and wind are the cheapest ways to produce electricity. As gas prices rise, producers with those low cost assets benefit. So, we believe investors can benefit from rising natural gas prices by owning certain utilities whose electricity plants consist of a disproportionately high percentage of nuclear, wind and hydro. We seek out the utilities with this type of advantage.

Simple micro-economics that many of us learned as Freshmen in college can go a long way to guiding investment decisions. A margin umbrella protects a low cost producer and enables it to benefit when its relative advantage increases. Understanding this may enable investors to benefit in ways that may be hidden from others. It also may enable some investors to figure out when consensus sell side and investor opinion on earnings projections may be wrong. This is another tool in our toolbox that we deploy to help navigate difficult markets.  Every advantage is necessary because the future is unknowable. Investors can make educated choices on market sectors such as natural gas or utilities but then they have to make every effort to understand the dynamics of those sectors that may help them to make the correct investments. Sometimes, a basic understanding of the way micro-economics works can provide important insight.  Predicting security prices may be even more difficult than predicting the weather. Sometimes the weatherman tells us to not forget to take an umbrella. That is good advice in investing also.