Sending your son or daughter off to college solidifies your realization that their childhood is over.  Although my son has been away at boarding school for the past two school years, his recent acceptance to college really hit home that he has grown up.  I guess somehow when he was still in high school, albeit boarding high school, there was always a chance he would come back.  With him being 19 years old and going off to college, my time as his full time dad is now through for sure.  That realization made me wander nostalgically into his room at our home in New York where he spent most of his life before going off to prep school.  It hasn’t really changed much since he was a really young child.   On top of a book shelf was a stack of books that hadn’t been touched in well over a decade.  It was a group of books that I read to him in a pre-bedtime ritual during the period when he was learning to read.  Most visible in the stack was “Oh, the Places You’ll Go!” By Dr. Seuss.

I recall the book had a lot of lessons that resonated with me as an adult.  However, when I picked it up again for the first time in 15 years I quickly realized it had some important messages about investing as well. 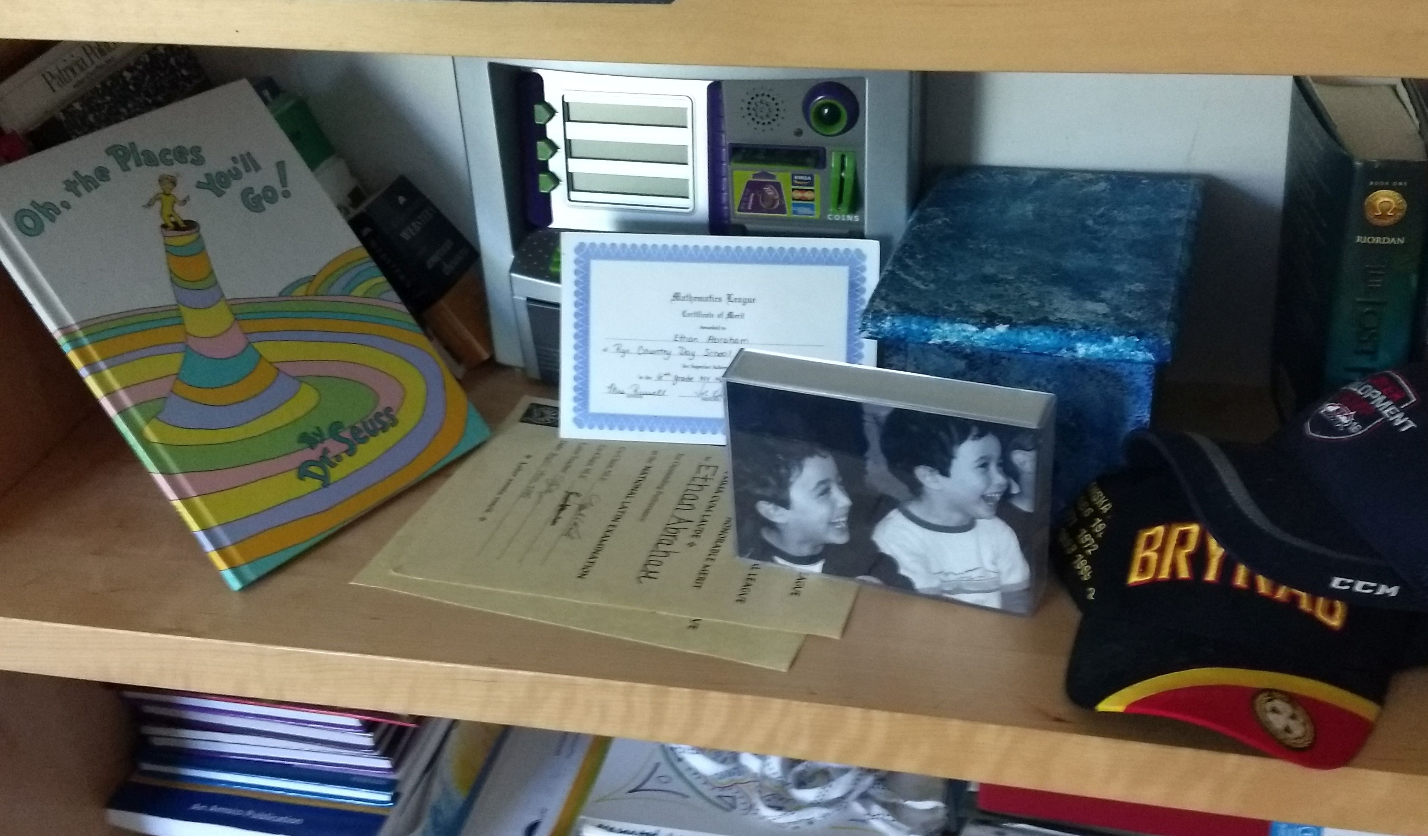 At our company, we are both Top Down and Bottom Up investors.   Top Down investment selection is the concept of having a macro view on the market or a sector that we want to have exposure to and then going to find specific securities that we like to express that view. It also encompasses avoiding sectors when we are suspicious about their fundamentals.   For example, if we think the price of natural gas is too low and may rise, we want exposure to it and we search out the best companies to invest in that will benefit from rising gas prices.

Bottom up investing is when investors search for individual securities that fit their investment criteria without, at least initially, regard to the sectors or themes that such an investment would be adding to a portfolio.  We wrote about one way we do bottom up investing in our piece on quantitative screening in Tool Time.

Given that there are thousands of investment choices, Top Down investing is often about choosing what investments not to consider.  The S&P 500 alone has 130 sub sectors to choose from.  Each of these groups have investable companies in different countries all around the world as well as domestic companies with exposure to different geographic locations. So, Dr. Seuss described our top down approach pretty well when he wrote “You’ll look up and down streets, Look ‘em over with care.  About some you will say, “I don’t choose to go there . . . you’re too smart to go down any not-so-good street.”

Natural Gas: In the Waiting Place

Many years ago, our top down analysis identified natural gas as a potential sector for investment.  This is because the price of natural gas fell precipitously relative to oil.  The two forms of hydrocarbon energy are substitutes for one another.  Hydrocarbons can be used to heat homes and buildings, to power vehicles, to produce electricity or even to be transformed into chemicals.   Whether or not the user chooses oil or natural gas is often largely dependent on which has a lower price.    This creates an arbitrage situation whereby the price of the two substitute commodities should tend - over the very long run - to be priced at parity to one another.  As the chart below shows, this relationship held true from when the natural gas price was deregulated in the early 1990’s until the last year or so of the decade of the 2000’s. 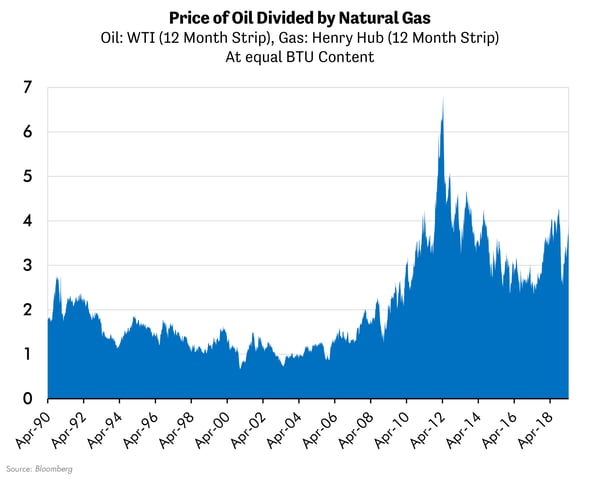 Given that the two commodities are long-term substitutes, we believed that this price relationship could not last forever.  Homeowners would likely want to heat their homes more cheaply and thus would switch to natural gas if they could, businesses would build factories powered by natural gas, utilities would use natural gas to power turbines rather than oil, chemical plants would use liquids derived from natural gas rather than from oil. These were only some of the substitutions that were going to take place, in our view.

However, as Dr. Seuss noted, sometimes we have to be careful or we end up where you don’t want to be: The Waiting Place.  “You can get so confused that you’ll start in to race down long wiggled roads at a break-necking pace and grind on for miles across weirdish wild space, headed, I fear, toward a most useless place.  The Waiting Place …”

As an investor, we don’t want to identify a top down sector that has good characteristics and jump in at a “break-necking pace.”  Natural gas had become cheaper than oil for a reason.  It had become abundant and cheap to produce in North America because of a new way of extracting hydrocarbons from the earth called Fracking.  The new demand that would arise from the arbitrage we contemplated would take years to develop.  In our view, those who were going to spend large amounts of money on new natural gas consuming projects were going to need to be convinced the price disparity was going to last long enough for their investment to be worthwhile.  Then they were going to have to plan, permit and build the new factories, pipelines and other things necessary to increase demand.  It was going to take a while.  As researchers, we were in the Waiting Place.  There we stayed for many, many years.  Fortunately, we were not there as investors.

There is another reason that natural gas demand might increase besides oil price arbitrage.   There is broad consensus world-wide that global warming is real and that it is caused by burning fossil fuels for energy.   Thus, governments around the world have been encouraging and subsidizing the creation of electricity from renewable resources that do not burn fossil fuels.  They have also encouraged and subsidized the use of electricity for energy in transportation, even in passenger cars.   This has helped the development of the electric vehicle industry which we believe is beginning to reach critical mass.  It appears that over the next half decade electric vehicles will begin to take material market share from gasoline vehicles.   If so, this may increase demand on electric power plants at a much faster pace than electricity can be sourced from renewable energy.  Since natural gas power production is 50%-60% cleaner than coal and much cheaper than oil, much of the incremental electricity production is likely to come from natural gas.

Are we finished with the Waiting Place?

The middle of this decade was the time when the new demand drivers were being prepared and built.  Now, years later, the end of the decade is seeing that extra natural gas demand.  The proof is in the recent demand uptick in the data from the Energy Information Agency (EIA), shown below. 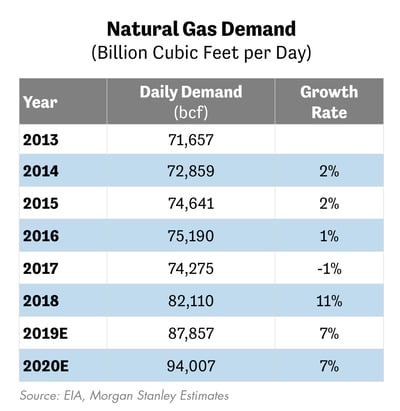 This step change in demand came primarily from new chemical plants and Liquified Natural Gas (LNG) export terminals built over the past several years.   New facilities should continue to come on line throughout 2019 and 2020. 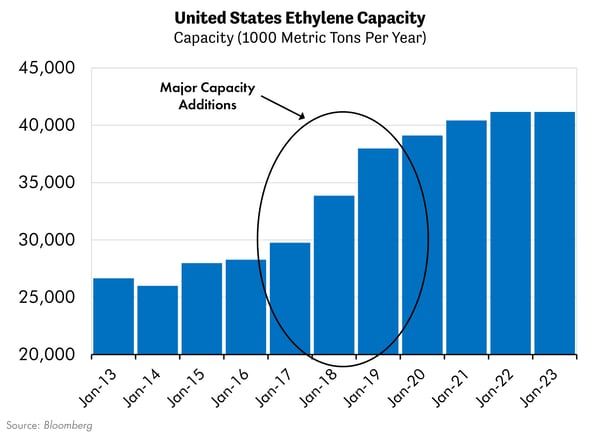 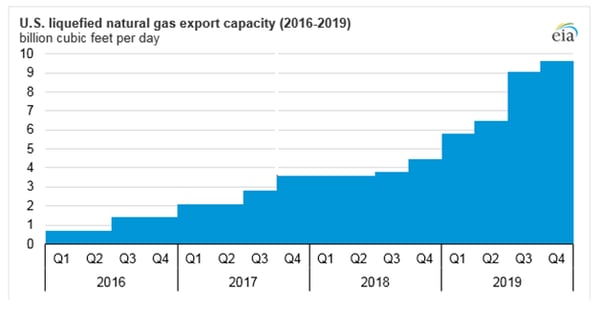 At the same time EV sales are just beginning their potentially exponential growth phase as affordable price models are coming to market from many of the incumbent automobile manufacturers to compete with Tesla, which was the first mover in the high and middle price ranges. 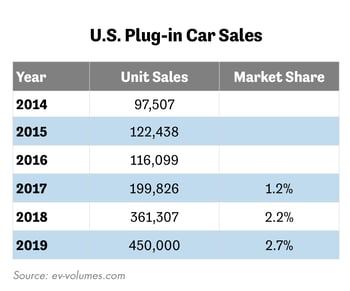 Despite the recent strong uptick in natural gas demand, prices have not yet reacted, keeping gas investors in the Waiting Place.  That is because supply growth has been dramatic.  Of late, we believe this has been principally a result of associated natural gas from oil wells in the Permian Basin of West Texas.   The Permian Basin has been the most prolific area for oil supply growth in the world. There is a material amount of natural gas produced as a by-product of these new oil wells, which is known as “associated gas”.   In the near term the growth in the Permian has been so dramatic that there is not enough pipeline capacity to bring that oil to market.  So, we believe the growth has to slow down.   In the longer term we believe that lower oil prices (brought about by more electric vehicles), a more difficult financing environment and lower than expected returns may combine to create substantial headwinds for production growth in that region.  If that occurs, and the associated gas growth slows down, the supply side for natural gas could become favorable thus helping to get gas out of the Waiting Place.

Our research process is constantly monitoring industries and sectors from a top down perspective looking for anomalies that might create opportunities for investment.   Often we see situations where cyclically depressed prices and distressed valuations intrigue us.  Natural gas is one such sector.   Commodity investors often say that the best cure for low prices is low prices.   In natural gas, we believe we have found such a sector.  However, believing that prices are likely to rise in the long term may not make investing in a sector a good idea. Just as low prices can cure low prices, often they stay low for a long time.   Dr. Seuss’ frustrating Waiting Place can endure for a long time.  It is important to time entry when the probability that prices will move is substantial enough to justify the risk.  Also, as always, it is important to choose investments that have valuation or other downside protection should our timing be off.

“Somehow you’ll escape all that waiting and staying.  You’ll find the bright places where Boom Bands are Playing.”  Dr. Seuss from “Oh, the Places You’ll Go!”