A Pipeline to Wealth

A few days ago, came news that Jeff Bezos of Amazon is the richest person on Earth and that he is the first person ever with wealth topping $150 billion.  Exciting news for him.  However, adjusted for inflation Bezos barely breaks into the league of John D. Rockefeller. Bezos is worth .8% of current U.S. GDP - Rockefeller was worth more than 2%. In his time, he was more than two times as wealthy as Bezos is today.  It is well known that Rockefeller got rich from oil.  Very rich.  However, he was not the oil tycoon imagined by pop culture.  He was very different.

The oil tycoon has a special lore in American culture, even in pop culture.  Who can forget the late Larry Hagman as JR Ewing in the prime-time soap opera, Dallas, that ran from 1978 to 1992?  It ranks as one of the longest running prime time television series of all time.  JR Ewing ran the fictional Dallas based exploration and production (E&P) company, Ewing Oil.  There are countless examples of JR Ewing type fictional characters and certainly some real ones that preceded Dallas’ 1980’s run.  Below is a poster from Tulsa, a 1949 academy award nominated movie that had the Oklahoma oil business as its backdrop.

The oil tycoon is a mainstay of American pop culture because searching for and finding oil is exciting and even glamorous, particularly the gushers (pictured below).  Certainly, the wealth they create is. 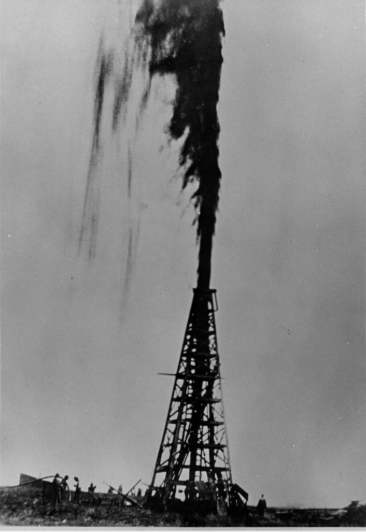 The first oil tycoon, Rockefeller, may be the inspiration for the fictional characters.  Yet, in reality Rockefeller’s wealth came from oil - but not in the way it is imagined in fiction.

The Drake well drilled near Titusville Pennsylvania in 1859 was the first commercial oil well that generated an oil boom in its vicinity.  There is a museum on its site and it is a national landmark.   Due to the drilling generated by the Drake find, by the late 1800’s, 85% of the world’s oil was produced in Western Pennsylvania.  Most of that oil was shipped to refineries in Ohio or the East Coast to produce Kerosene to light North America’s two largest cities, New York and Philadelphia, as well as others.  Rockefeller gained his immense wealth not from the oil drilling and the wells but by controlling the infrastructure needed to deliver the oil to consumers.  He strove to dominate the refining, transport and retail distribution of oil because that way he could command the system and make the most money; which he did until his Standard Oil Company was broken up by the Federal Government’s nascent anti-trust laws in 1911. 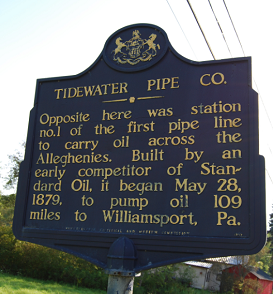 Rockefeller’s control over transport from the first oil fields was so complete that it spawned the pipeline industry.  The first oil pipeline was built to bypass John Rockefeller’s control of the railroads that shipped all the oil from the early fields.  The pipeline business is not as exciting as the oil drilling business which is why there is no museum to it (although there is a memorial placard pictured above) nor television programs about its owners.  The Tidewater pipeline was built in 1879 from Titusville Pennsylvania to Williamsport, which is far better known for being the birthplace of Little League Baseball than oil pipelines.  It was designed to break Rockefeller’s control of transport, which it did - until of course he bought it.  He then preceded to build pipelines of his own to further solidify Standard Oil’s control of oil transportation in the Northeast.

Exploration and Production is a Tough Business

Finding oil and gas may seem glamorous, but it is a difficult business that requires a lot of capital.  The need for large amounts of capital are constant because the oil that is being produced is also being consumed and therefore more of it must always be found.   It’s a harsh treadmill.  Although during boom times when prices are high the profitability of E&P operations is also high, over the long term the returns are dismal.   Whether or not those operations make decent profits is often dependent on the ability to easily transport the production to a profitable location at a low cost, to put the product into storage to wait for better times to sell at higher prices or to access refineries or chemical plants that can manufacture the right end products from the oil or gas that is produced.  Energy infrastructure that transports, processes, refines, stores and distributes the output of oil and gas wells is equally important and almost always more profitable in the long run than the producing part of the business.

The Right Investments in the Energy Value Chain

Flowing oil and gas through a pipeline requires no loading and unloading, no return trip by a transportation vehicle and has extremely low variable costs.  Therefore, it is the cheapest way to move around the liquid or gas products of oil drilling.   Similarly, important to the economics, a pipeline requires a large capital outlay but relatively low ongoing capital spending.  It is also usually protected from competition by the difficulty of obtaining rights of way over large geographic areas and by federal and state regulation.  So, pipelines earn returns for a very long time and their profitability tends to be high; much higher than E&P companies.  Over the past 20 years the companies in the Alerian Mlp Index (which has a very high concentration of pipeline operators) with publicly available financials over the period have averaged a 9.9 % return on invested capital.  The S&P 500 Oil & Gas Exploration and Production Sub Industry companies with 20 years of data have earned just 4.5%.

What is even more surprising is that the valuation of the companies in the Alerian index tend to be lower despite their consistently better returns.  The companies generally trade at lower P/E ratios except when Oil and Gas prices are extremely depressed and they tend to trade cheaper on price to book value and other measures.  This chronic undervaluation while also making better returns has enabled the pipeline sector to outperform the E&P sector by nearly 100% over the past decade. 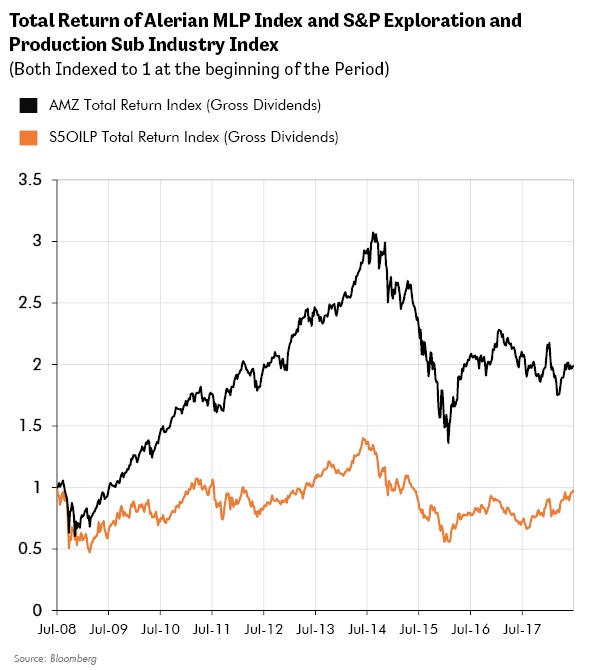 Profitability and Cash Are What Matter

A pipeline is not likely to create returns anywhere near what a successful oil well can, especially if the well is brought on stream during a boom in prices.  However, a pipeline has much better odds and it will likely be earning returns for its investors long after the blockbuster oil find of the day.   It’s a simple and steady business. Importantly, in most cases a pipeline company will have very little commodity price exposure since it is getting paid a tariff, usually regulated, to transport the petroleum product.  The principal risk from the oil and gas cycle is in volume rather than price declines.  However, in some cases if volumes decline regulators will allow higher tariffs to keep the pipeline's rate of return at a required level.  This steady business and the need for relatively small ongoing capital enable pipelines to generate a lot of cash.  They often return this cash to their owners in the form of hefty dividend payments.  This is also a very attractive part of the business, especially for investors who favor income generating investments.

Another reason to be interested in the pipeline business is the prospect for even better than historic returns now.  That is because geographically the energy business has come full circle.   As mentioned earlier, the oil business first grew to provide petroleum products to the population centers in the northeast from Western Pennsylvania oil fields.  However, the oil found in Pennsylvania turned out to not be nearly as plentiful and cheap as that which was found around 1900 in Texas, the Mississippi Delta and in the Gulf of Mexico.  That was where the cheap oil and natural gas was found and therefore that is where the refineries, chemical plants and storage facilities were built to service the production.   Pipelines were built to move the products to the northeast where the heavy demand was.   This situation started in the early 1900’s and lasted for an entire century.  The United States energy business was centered on and around the Gulf Coast.  However, in the mid-2000’s a technique called fracking was developed and perfected that enabled oil and gas to be extracted from much smaller pools of hydrocarbons.  As it turned out, this technique and its use on the Marcellus shale in Pennsylvania and West Virginia created a new energy boom in the area where it all started.  Today, the cheapest and most abundant natural gas in the world is produced in the Northeast.  That gas and the natural gas liquids that come with it now need to be moved by new or expanded pipelines into the city centers or back down to storage facilities and chemical plants on the Gulf Coast.  The gas or the cheap chemical products produced with it are now even being exported around the world displacing product from the Middle East in some cases.  North America simply needs more pipelines and more ways to utilize cheap Pennsylvania and West Virginia natural gas.  Pipeline and energy infrastructure companies stand to benefit.

Energy Infrastructure may not be as glamorous as some other businesses but glamour is not what we care about.  We care about seeking the best returns while taking the least amount of risk.   Trying to find the next hot tech company, clothing brand or home run E&P company can be thrilling.  However, we have to use our research effort wisely.  The winners of those types of investments are very hard to identify even with our in-depth research process and the losers tend to lose very badly.  A lot of investors chase those seemingly exciting investments.  We look for investments that the crowd is not chasing and that we believe have a high probability for success.   It is nice to get a good dividend stream along the way to mitigate any unexpected negative outcomes.   Energy infrastructure is a sector that fits in well with our objectives.