According to Forbes magazine, James Harden, a basketball player for the NBA’s Houston Rockets (sometimes best known for his unique long beard), was the forty-fifth highest paid celebrity last year, raking in approximately $45 million.  His success was a highly unlikely outcome for a child who grew up in the drug and crime infested ghetto of Compton, California in the 1990’s.  Today, his agent and manager is his mother, Monja Willis, who brought him up in those mean streets and guided him to where he is today.  The other day I watched a documentary about Harden on ESPN called “Behind the Beard.”

It described a note the twelve-year-old Harden left one morning for his mother.  He wrote “Keep this piece of paper, I’m gonna be a star.”  When the ESPN interviewer asked his mother what she thought when she read it her response was “I hope so, but he better have a plan B.”  Sage advice!

Does Wall Street Have a Plan B?

That point resonated with me as I thought about investing.  It seems that Monja Willis might have a lot more sense than some of Wall Street’s seemingly brightest minds.  Perhaps that is one of the reasons why her son has been so successful.  Most would likely agree that betting everything on a long shot is not a prudent strategy.

Remaining optimistic on the prospects for the equity markets is not as extreme as betting your fourteen-year-old son would become an NBA star, even for a teenager that exhibits great ability at that age!  However, there are warning signs in the markets that one should have a viable Plan B.

For example, Wall Street recently set a new record for the percentage of Initial Public Offerings (IPOs) floated with companies that are money-losing.  In fact, the two recent rideshare IPO’s are the two “greatest losers” among IPOs of all time. 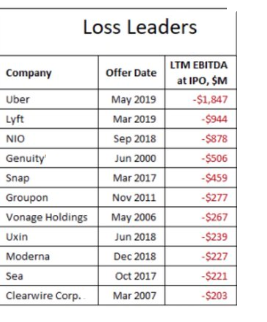 Perhaps more important, some of these companies do not have diminishing losses as has typically been the case with money-losing IPOs in the past.  In fact, it appears that losses are being tolerated as a new paradigm.  In other words, investors in these companies seem to accept current losses, and are relying on a Plan B for profitability.

The rideshare companies may be relying on the availability of auto pilot car driving technology to eliminate costs (i.e., having to pay drivers).  While such technology may be available in the future, relying on it to provide support to the current valuation is not a great Plan B, in our opinion.

Relying on easy money from the capital markets for one’s money-losing company is another common Plan B.  We believe, it is risky to count on the availability of money from the public markets indefinitely.  Not surprisingly, the last time so many companies came public losing money was in the infamous tech bubble of the late 1990’s, as is illustrated in the chart below. Today’s cycle has exceeded that one.

Memories of Bubbles Past

On April 18, 2001 I was sitting in an interview hoping to land a new job at a hedge fund on Wall Street.  Although I recall neither the firm nor the portfolio manager with whom I was talking, I remember vividly Alan Greenspan’s surprise 50 basis point Federal Funds rate cut.  The interviewer was looking at his computer screen.  He jumped to his feet and said, “Sorry, I need to put in trades, we need to continue this later.”  The Nasdaq Index rallied hard, nearly 6% that day as the portfolio manager and a lot of others quickly bought stocks.  This buying frenzy drove the market nearly 20% higher before it was over.  One of the reasons behind the buying, presumably, was the Federal Reserve’s rate cuts would allow many of that cycle’s money losing companies another chance to access capital.  Plan B was working – or so everyone hoped at the time.

Reality, however, would fall short of this hope.  Despite four additional rate cuts in the coming months the stock market declined nearly 30% from where it was the morning of my interview.  Many of the money-losing IPOs from that cycle were unable to raise more money and never recovered.  It took 15 years for the technology sector to break even from its prior high.

Of course, in this cycle it is not just IPO investors who are hoping for a Fed-driven Plan B.  Many companies and their investors are relying on low interest rates in the debt markets for earnings growth.  Companies are buying back their own stock at a record pace often using debt.

The problem today appears to be that buybacks are debt funded and may over leverage companies.  Similar to the problem that money-losing IPOs may have if they cannot get more money from the public markets, what if the debt markets close and the buy backs are forced to stop?  Even worse perhaps, what if a recession comes and higher debt loads cannot be serviced?  What is the Plan B then?

What is a viable Plan B?

Rather than hope for fanciful new technology or the Fed to bail out our investments, we suggest a different – and we believe better Plan B.  That is to try to safeguard portfolios through more careful investing.  We try to hedge, diversify and seek investments that have valuation support and sustainable carry (dividends).  The losses now tolerated in many companies may not become profits as soon as many hope.  The debt markets may not stay open for future buybacks.  The Federal Reserve, which is now widely expected to lower rates by the end of the year, may not be able to provide enough liquidity to encourage new investors to continue to fund loss-making enterprises.  The extremely low unemployment rate may be a lagging indicator given many signs that this extended cycle is beginning to slow down.  So, we try to make investments that should protect portfolios if the fanciful or best-case scenarios do not come to fruition.

A growing portion of our investments are those we believe are counter cyclical. Examples include long term treasury bonds, gold related equities as well as other stocks that benefit in recessionary times.   Many companies have business models that benefit during a recession or from market dislocation.  Our research team identified 38 companies of greater than $1 billion market capitalization listed on United States exchanges that had a beta of less than .25 to the market during the financial crisis.  Similarly, there were 336 companies that grew earnings during the worst four quarters of the great recession.   Our Plan B includes owning what we believe are the best of those.

Our diversification strategy for this late in the cycle includes traditional types of diversification across sectors, geographies and asset classes.  However, it also includes trying to avoid the worst excesses of this cycle.  For example, reliance on growth from debt-funded buybacks is something we try to avoid.

Our ever-present vigilance towards valuation is the mainstay of Plan B. Why? Because valuation is what should protect us if our hopes for a company’s near-term future are misplaced.  We look at different valuation metrics for different businesses.  For highly asset intensive businesses we may choose replacement cost.  Businesses that are less asset intensive or with assets that are not readily replaceable, we often look to discounted cash flow or traditional multiple measures (such as price to book value or price to earnings).  An important component is also dividend yield.  If a company pays a healthy dividend that we think is sustainable, even in a severe recession, then we believe that is a pretty good Plan B.   Even if the stock does not go up, investors are likely to still get paid!

It has been more than ten years since the current bull market began and only slightly less than ten years since the economic recovery began.  Historically, it would be unusual for this positive trend to endure.  This seems even more likely due to many of the excesses that we see around us.  Look no further than the money-losing companies that seem to so easily access the IPO market and the large amounts of debt that has been assumed, often not to enhance a company’s productive capacity but simply to purchase its own shares.  Given all that, we are not going to rely solely on our confidence that we can be stars in the investment world (and certainly not in the NBA).  We think it best to have a well-thought-out Plan B.