"You have stolen my dreams and my childhood with your empty words. . . . People are suffering. People are dying. Entire ecosystems are collapsing. We are in the beginning of a mass extinction, and all you can talk about is money and fairy tales of eternal economic growth. How dare you!” -  Greta Thunberg 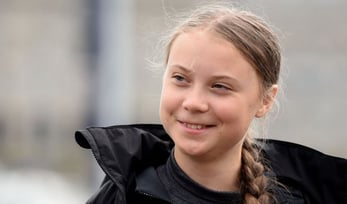 Greta Thunberg, the 16 year-old Swedish climate activist was recently named Time Magazine’s person of the year.  She first gained international fame last year when, as a 15 year-old, she began skipping school to go to the Swedish Parliament building to protest her perceived lack of action on climate policy.  That protest and her subsequent public appearances on behalf of climate activist causes have gone viral leading her to become the de-facto face of the climate change movement.

In most of her public appearances Greta does not appear to be very happy.  In fact, she admits to being “depressed [and] lethargic” due to too little being done about climate change.  We think, perhaps Greta shouldn’t be so upset.  Significant strides are being made which will likely have a dramatic impact on carbon emissions and have a decent probability of averting the atmospheric CO2 levels that some predict will bring catastrophic results to our planet.  Importantly, these strides will enable those who, to paraphrase Greta, “care only about money” to benefit (for investors in the form of higher investment returns or for consumers through their electricity and fuel bills that will not rise)  while also allowing Greta and her activist colleagues to achieve the results they desire.  Perhaps not quite as fast as they would like but quickly, nonetheless.  Importantly, these changes may also be able to address a central criticism of current climate crusading in wealthy countries as articulated by none other than Vladimir Putin “No one has explained to Greta the modern world is complex and different and . . . people in Africa and many Asian countries want to live at the same wealth level as in Sweden.”

If Greta chooses to be unhappy that’s her prerogative, but the adults she is excoriating for not doing enough to prevent climate change have spent more than twenty years subsidizing the development of zero emission technologies.  That effort is just now bearing fruit.  In fact, the game is right now completely changing.  Helped initially by subsidies, the cost of producing electricity from wind and solar technology has declined 69% and 88% respectively over the past decade. 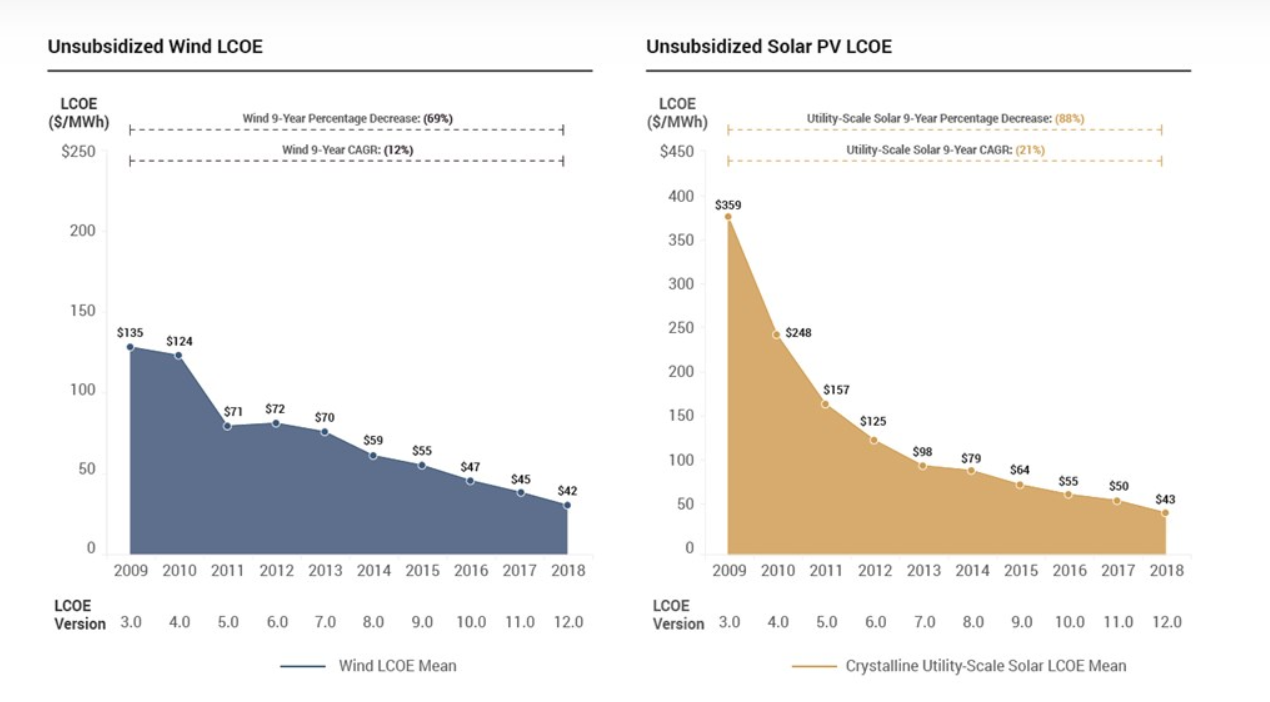 This achievement has brought costs down to where, for the first time, in some geographic locations, zero emissions unsubsidized wind and solar generation is cost-competitive with combined cycle natural gas generation, the previously recognized lowest cost form of electricity production.  In fact, according to the data below, in some cases such generation capacity appears to be the low-cost option.

What this means is nothing less than that investors have a purely economic incentive to make Greta happy . . . even if they do not care one iota about carbon emissions and care only about money.  In certain locations new energy generation capacity will be renewable for purely economic reasons.   These places are likely to include emerging markets in Africa and Asia referenced above by Vladimir Putin.  Those countries may be able to supply their growing middle class, at least partially, with the cheapest form of energy while also not harming the environment.

In developed markets things are a little different.  Unfortunately, right now in such markets, including the United States, electricity demand is only growing roughly 1% per year and likely will not accelerate until at least the middle of the decade when electric vehicle demand begins to materially impact the overall picture.  So, if renewable sources were being added to merely satiate additional demand, there would not be much impact on CO2 emissions and Greta would have a reason to remain upset.  However, electricity generation and transmission in the United States is largely a regulated monopoly.  Companies are allowed and encouraged to make investments and are entitled to a reasonable rate of return on those investments.  They usually have no problem getting paid for such investments unless higher electricity prices bite consumers and there is political backlash.

With the new cost structure for renewables, utilities should have incentive to invest in these new technologies and substitute the electricity generated from them in place of legacy coal and other generation capacity.  This enables utilities to grow their earnings by increasing their “rate base” but what is really happening is they are merely substituting higher cost generation with lower cost generation.  This increases margins and earnings without the need for higher electricity prices.  So, everyone is happy.  Utilities make more money and, presumably their stock prices go up (which makes their shareholders happy … as has been happening), consumers are happy because their electricity bills do not go up, politicians are happy because everyone else is happy, especially Greta and her environmentalist friends who see renewable energy displacing fossil fuel energy.

Utilities even tend to benefit if independent companies build plants and sell the cheaper power into the grid because the utility still must make transmission investments to get the electricity onto the grid and thus their rate base rises.  It is even likely the generation company will benefit from the margin umbrella (explained in an earlier Risk On/Risk Off) afforded by their lower cost electricity generation.

There is a Limit

This new technology can migrate a very large percentage of the United State’s electricity generation to renewable energy and make a significant dent in carbon emissions.  However, Greta will not be completely happy because there are limits.  Electricity is very expensive to transport and therefore places that do not have robust enough sunshine or wind will not be served by these new technologies (at least not without subsidies).  Even in places where wind and solar power are economic much of the generation capacity cannot be switched to renewables.  That is because those generators do not produce electricity when the sun is not out or the wind is not blowing.  Battery storage is much too expensive and has not been dropping at a rate that will likely be able to solve this problem in the next decade.  So for now, the best Greta can hope for is that all the generation needed in addition to renewables, migrates to natural gas, which is the cheapest and lowest carbon footprint of the legacy generation sources.  Substitution to gas is bullish for natural gas demand and is good for the environment but unfortunately does not appear to satisfy the more ardent climate activists like Greta.

There is Hope for Zero Emissions

Nevertheless, there is reason for Greta to really get happy.  Several companies are working on significantly lowering carbon emissions from natural gas generators.  In fact, a private company in La Porte, Texas called Net Power appears to have cracked the code completely and has developed a natural gas generator that, if it can be scaled up, will be able to produce electricity at a similar cost to the most efficient combined cycle gas generators on the market today with 100% CO2 capture!  That’s not a typo, the generator will have zero carbon emissions.  Obviously, such a technology would be a further game changer.  All indications point to the viability and commercialization of the technology in the not too distant future.  Fortunately, investors can own this technology through a utility that owns a significant stake in Net Power.

We have outlined a lot to be optimistic about in this Risk on/Risk Off.  Utilities and merchant generators have tremendous potential to grow earnings by building solar and wind electricity generation.  Enough of the current electricity generation capacity can be migrated to these renewable sources to impact earnings of these companies for the next decade.  If this occurs, electricity prices should not be impacted and carbon emissions from electricity production will decline.  This should have a material impact in the United States and other countries that make similar investments.  Natural gas generation should continue to displace coal further lowering emissions.  This is good for the environment as well as the natural gas industry.  In addition, if the Net Power technology is able to scale commercially both its owners and natural gas producers will benefit substantially while electricity costs remain in check and emissions from electricity generation decline to near zero.  Keep in mind, if on the road transport goes to fully electric automobiles and trucks and are supplied by zero emission power plants even the most ardent climate activists are likely to be satisfied by the magnitude of CO2 reduction.  All this brought about by nearly pure economic justification, not government subsidy.  Something investors and Greta can both smile about.

So, we suggest that Greta Thunburg should be happy and enjoy her Person of the Year honor.  The potential climate catastrophe might not be something to worry about after all.