Freshman year in college is a seminal experience for many Americans fortunate enough to be able to afford it.  For most, it’s the first time living away from one’s parents and therefore experiencing life as somewhat of an adult.   “Somewhat” because most college students are still financially supported by their parents and continue to rely on them for advice and emotional support.   Freshman year in college has been on my mind lately as my oldest son scrambles to complete his college applications by January 1st, the deadline for most of the schools to which he is applying.   Where he will spend his freshman year is very much up in the air despite his stellar high school record.  The one thing his experience in examining colleges has taught me, is that competitive colleges are orders of magnitude harder to gain admittance to than they were when I was a senior in high school in 1983.

One of the typical classes of the freshman year experience is Economics 101.  I remember it well.  The introduction of microeconomic concepts such as supply and demand, profit maximization, elasticity and monopoly power made an indelible impression.  I remember the lectures to this day.  As a first step into adulthood my parents gave me a credit card and a budget.  So, I was both living and studying Econ 101.

I noticed how much filling up my car with a tank of gasoline impacted my budget.  Saving even a few pennies per gallon made a difference.  I also learned a lot about risk and return when I took a few trips to Atlantic City and found that “investing” in blackjack might not be a great way to keep to my budget.  That, however, is a story for another Risk On/Risk Off report.

Substitution matters a lot in some goods, particularly in commodities.  There are countless examples.  When the price of cotton rises, demand for synthetic fibers (made from petrochemicals) rises and vice versa.

Energy is arguably the world’s most important physical commodity.  Since the industrial revolution began in Great Britain, the measure of energy we still use today is called the British Thermal Unit (BTU).  It is a measure of the amount of heat that can be generated by a given amount of an energy source.  Coal, oil and natural gas are energy substitutes that efficiently produce BTUs.

Consumers need BTU’s of energy.  When I was an 18 year old driving my car to Philadelphia, I would have happily substituted electricity, natural gas or a windmill on top of my vehicle if I could travel at a lower cost.  When building a power plant, utilities and other companies who need energy can decide between coal, natural gas, oil or other forms of energy. It should come as no surprise if they consistently choose to use more of the lowest priced substitute.

The Price Relationship Between Oil AND Natural Gas

Econ 101 teaches us that the price of natural gas and oil should be equivalent over time, because they are substitutes.  One BTU of energy from oil should tend towards energy equivalency with one BTU from natural gas.  Why? The invisible hand of the free market should guide consumers to seek out the lowest cost energy, the lowest priced substitute.  The price of natural gas and oil, once the natural gas market was de-regulated in the early 1970s until around 2005, demonstrated this relationship. 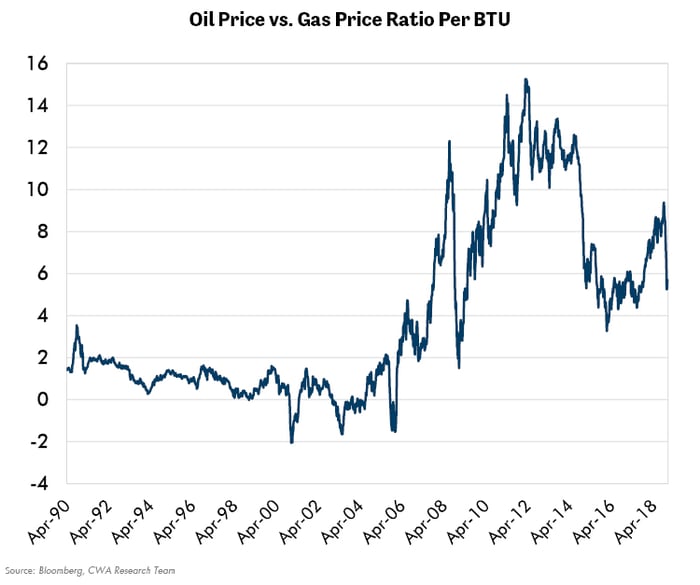 What changed?  A little more than ten years ago, the cost to extract natural gas from shale declined, a lot.  Nearly overnight, domestic production, which had been stagnant for nearly a decade, began to grow.  Suddenly there was too much natural gas.  Natural gas got very cheap relative to oil.  So, consumers who could switch, did.  Petrochemical plants and power plants used more natural gas.

However, substitution for some goods can take a long time.  Natural gas is difficult and dangerous to transport, store and use.  A lot of planning and investment must go into substituting it for oil.  The clear signal that gas would stay cheaper than oil probably was not understood by the market until the early years of this decade.  From there the cycle time for new investments was five to seven years.

Almost all new power plants planned this decade were designed to use natural gas as their raw material (feedstock).  So were all the new petrochemical plants.  Transportation fleets (bus, truck and even automobiles) began to switch to use natural gas.  New residential developments were mostly all planned with natural gas heating.  Billions went into liquefied natural gas (LNG) export terminals to ship cheap domestic natural gas to other countries.  Our natural gas was so cheap, that often gas fired electric plants displaced legacy coal plants, traditionally the cheapest form of energy.   It is this electricity that will power electric cars, which are expected to increasingly penetrate the new car market over the next decade.

However, the continuing supply growth and the lag between planning to substitute and the actual substitution kept natural gas prices low.  Very low.

Supply Growth – Set to Stagnate After a Huge Boom? 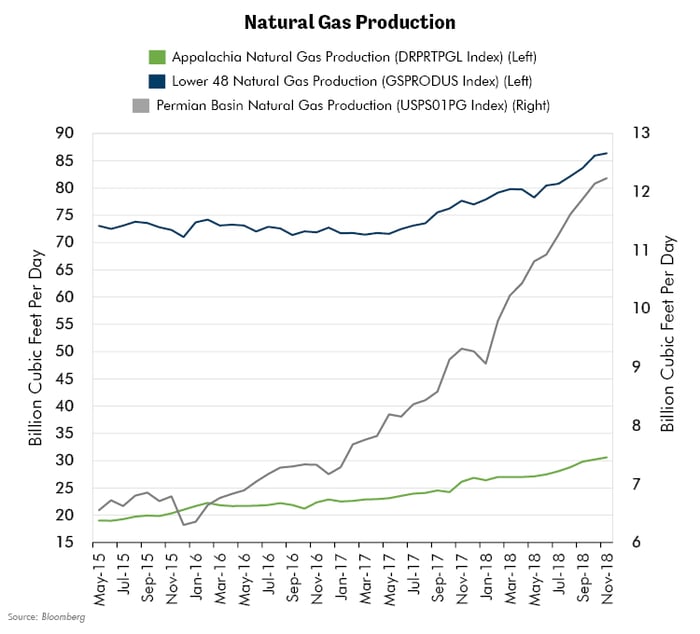 This Permian production may slow or even fall in the very near term for three reasons.  First, there are oil pipeline constraints that are likely to slow down oil drilling in the basin regardless of what happens to oil prices.  Second, oil prices are materially lower now than just a few months ago.  Third, and perhaps most important, the funds to finance shale drilling may dry up as the capital markets lose their enthusiasm to fund such projects. As oil prices go down, so do the economics of drilling.  Financing production increases may get a lot harder in today’s less forgiving credit markets.

Natural gas demand is finally here in the form of new chemical plants, LNG export terminals, fertilizer plants as well as a material increase in natural gas demand for transport.  The bulk of new chemical and fertilizer plants came on line or are coming on line in 2018 and 2019.  LNG demand may increase to 10 bcf per day in 2019 from zero in 2016.  Electric vehicle sales should top 360,000 this year up from 116,000 in 2015. Growth appears to be accelerating.   So, substitution is alive and well, it’s just taken a while to happen. This may be our investment opportunity.

After a long, near decade of low natural gas prices and disappointing results for producers, the situation may be changing.  Given our often-communicated philosophy of trying to anticipate rather than react, it may be time to begin accumulating positions that will benefit from a stronger natural gas price.  Our research team is analyzing potential investments that may do so.  Those investments may include not only direct producers of natural gas but also other companies that may benefit indirectly from higher natural gas prices.

Thinking back on Econ 101, the most important concept to grasp was that of constant change and that cycles happen all the time. When profits are high, companies tend to invest more, which may weigh upon future returns.   When prices are high, consumers seek out substitute goods. We believe this may be underway now in natural gas. This is why cycles exist.   A simple concept, if understood correctly, that can pay dividends for many years. Our job as an analytical team is to anticipate where those changes may occur and to invest accordingly.