Trees are the biggest living organisms on earth. The largest trees are more than ten times the size of a blue whale, which is the largest animal. That is huge! The typical trees harvested for lumber around the world are not as big as the giant sequoia, but they are big nonetheless. The wood they produce is an often over-looked part of the story of human civilization. 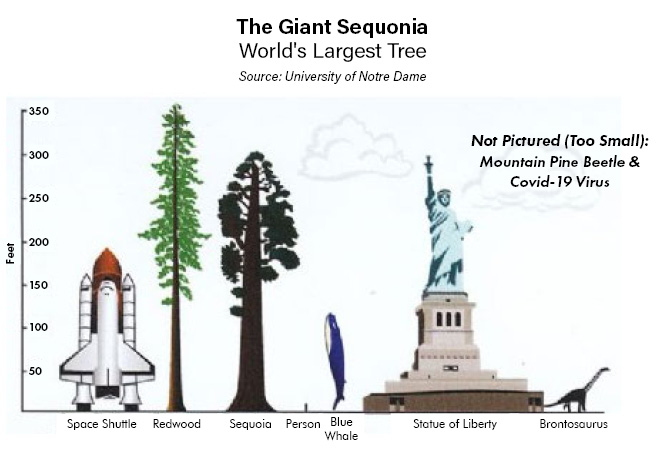 Sure, when we think of some of the major factors in man’s transformation of the earth from wilderness to what it is today, we think that all that progress started when we figured out how to make fire. But no one really thinks about the wood that was used in the process. There is a fair amount of nostalgia and mythology around the log cabin and logging (Abraham Lincoln’s childhood home and Paul Bunyan’s exploits for example). However by and large, when we think of tools and structures that shaped civilization we think in terms of metal (the bronze age, the iron age) and we think of cities made of stone and then steel, concrete and glass. Perhaps that is because structures made of those generally last longer and thus some are still around today (think of the pyramids or the Colosseum of ancient Rome). However, throughout history, there have probably been more people who lived, worked and interacted in wood structures than any other kind. Certainly today, most people in North America and many parts of the rest of the world live in wood frame homes. Wood has been and continues to be vital to the modern lifestyle. In fact, over the past few years several 200 foot or higher wood skyscrapers have been constructed and many larger ones are in the planning stage including, a 400 foot tower in Toronto. 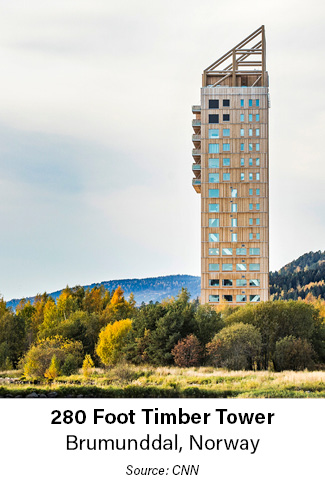 One reason for the new buildings is that wood is not only carbon neutral, its carbon negative. Wood is lighter than steel and concrete and requires less energy to move around and work with.  So, the carbon footprint of wood buildings appears to be in line with the objectives of those concerned with global warming. For this reason, companies such as Walmart and Microsoft have already announced plans to build with timber on their new campuses. It would not be a surprise if future cities will be made of wood.

Unlike trees and whales, the Mountain Pine Beetle is tiny. It measures around a quarter of an inch in length. It is, however, colossal relative to the Covid-19 Virus. That insidious living organism (assuming we consider a virus to be alive) measures approximately 100 nanometers. Its hard to describe how small 100 nanometers is. The amoebas that we looked at under microscopes in grade school biology are 500 microns. One micron is 1000 times the size of one nanometer so a Covid-19 virus is 5000 times smaller than an amoeba! Now that’s tiny. Similar to forms of life like trees, tiny forms of life have had a big impact on mankind. Insect infestations have devastated crops causing starvation and dislocation throughout the centuries while virus and bacteria plagues have killed millions and changed the course of history.

Today, both these giant and tiny forms of life are in the news. Devastating forest fires were raging in California and the Pacific Northwest while the tiny Covid-19 virus makes daily headlines for its impact on health, the economy and the future. The above-mentioned tiny Mountain Pine Beetle has also been in the news. It has been attacking trees in Western Canada and the United States Pacific Northwest.

These two little creatures, the virus and the beetle, have made life for the biggest creature, the tree, very difficult lately. While the beetle has rampaged through forests killing trees, the Covid-19 virus has increased man’s desire to cut the forests down to make lumber. The combination of the two (and the fires) sent lumber prices to all-time highs - in a hurry. The price has moderated somewhat recently, but remains well above the peak during the housing cycle and commodity boom of the mid-2000’s.

This has been particularly good for sawmills that turn trees into lumber, including Eastern North American sawmills. Log (known as Stumpage) shortages and higher prices in the west are not likely to harm sawmills in the east. In the Eastern United States trees are plentiful and stumpage prices have remained low, so mills are directly benefiting from the strong lumber price because transportation costs of shipping eastern logs to mills in the west is prohibitive. The difference between (south) eastern and western stumpage can be seen in the chart below. 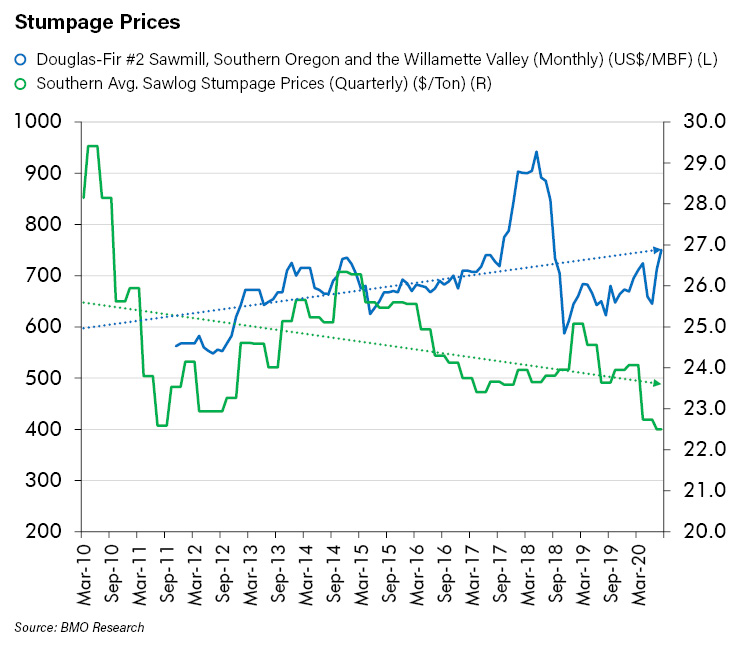 Similarly, Eastern Canadian lumber mills are also thriving. In Canada, the forests are generally owned by the provincial governments and leased under long-term arrangements to the sawmills. So, falling stumpage supply due to beetle infestation doesn’t impact a mill’s costs unless the sawmill is unable to procure logs. Which is the problem. Mills in Western Canada are suffering because they cannot produce as much lumber, which is impacting supply. This difficulty has been magnified by the forest fires and is one of the reasons lumber prices are up. In Eastern Canada healthy forests and access to them at long-term prices enable the mills to benefit directly from the higher lumber price.

It appears to be a good time to be a mill owner. After the housing bust and the great financial crisis, demand for lumber was soft. After all, new home construction is the main driver of wood demand and North America and most of the world entered a long period of slow new home construction.

Capacity declined as mills were closed or mothballed. According to BMO Research, North American capacity declined by 17% from its peak in 2006. However, the downturn created pent up demand for new homes especially as household formation began to recover from its post-financial crisis decline. As the new decade began, a new cycle appeared to be imminent. Then Covid hit.

That tiny virus dramatically changed the demand for lumber. We have discussed the impact on demand for single family homes in a prior Risk On / Risk Off. With lock downs and the potential to be exposed to a deadly virus from living close to others, flight from urban centers was swift. This was strengthened further by the necessity of working from home. Demand for single family homes, driven by continued virus fears and the social unrest that exploded in May has remained strong. As we expected, single family housing starts have rebounded from the temporary lock down decline. 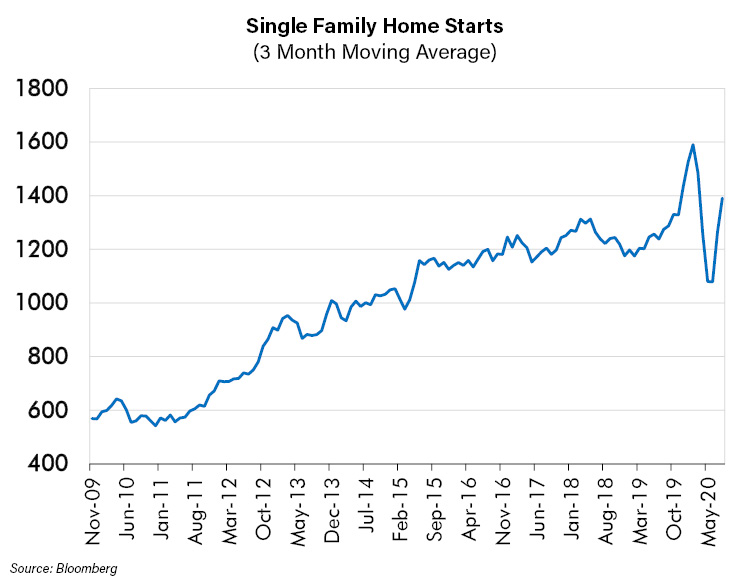 If and when the pandemic ends, demand for single family homes is not likely to decline. Many companies have realized that they can continue to let their employees work from home. They have found those workers to be productive and it saves them enormous sums in lower real estate costs. Further, the economic toll has had a dramatic impact on state and local government revenue. Many taxpayers in high tax states realize that even higher state and local taxes are probably on the way. Given their newfound mobility, many taxpayers in high tax states are leaving for lower tax environs. As new and higher taxes become reality, the incentive to move will intensify. So, we expect stronger demand for single family homes and thus for lumber.

However, lumber demand has come not only from new home construction but also from home renovations and additions. With so many Covid-19 homebound people and remote workers, the demand for larger or refurbished spaces has grown. The major hardware chains are reporting a substantial pick up in lumber demand for this reason. As more people realize they are going to work more from home, this remodeling demand will likely remain strong.

We believe the high lumber price may persist for a long time given the difficulty in sourcing logs for certain mills and the time required to restart idled capacity and complete greenfield mills. So, our research team believes that the forest product sector may be worthy of investors’ attention at this time. In addition, the strength in lumber may be another piece of evidence that a wider commodity cycle is unfolding. As we have noted in the past, gold strength is often a harbinger of a commodity cycle. Gold, palladium and now lumber are trading near all time highs. Although some commodities continue to be weak, others are showing signs of life. The long-suffering materials and energy sector may soon become much more attractive if indeed, as we suspect, a commodity cycle is in its infancy.

Economic cycles repeat because of the never-ending propensity to over invest when the cycle is strong and companies are flush with cash and under invest when the cycle is weak and cash is tight. Often though, an external catalyst to the cycle can increase public and investor awareness which, in turn, causes them to react and accelerate a new cycle. This can be a technological change, a new government tax or subsidy or even a major weather event. It seems likely that this is occurring in a new cycle in lumber. In this situation, we see both a supply catalyst, the Mountain Pine Beetle, and a demand catalyst, the Covid-19 lockdowns. Both of these were caused by tiny life forms that have had a big impact. This reminds us as a research team to pay attention to things both big and small. It is easy to miss things that can make a big impact on one’s investments. Big results can come from small things.

CWA Asset Management Group, LLC is an SEC-registered investment adviser, doing business as Capital Wealth Advisors and as blueharbor wealth advisors.  Fundamental Global Investors, LLC is a SEC-registered investment adviser that is affiliated with CWA Asset Management Group, LLC. Information presented is for educational purposes only and does not intend to make an offer or solicitation for the sale or purchase of any specific securities, investments, or investment strategies. Clients of CWA or Fundamental Global Funds may hold a position in securities mentioned within the articles. Investments involve risk and unless otherwise stated, are not guaranteed. Nothing herein should be interpreted as investment advice. Be sure to first consult with a qualified financial adviser and/or tax professional before implementing any strategy discussed herein. Specific companies or securities described in this report are meant to be illustrative of investment style. Such case studies are not meant to be, and may not be, representative of any portfolio or holdings of CWA Asset Management Group, LLC, or Fundamental Global Investors, LLC.