Toto, We're Not in Oklahoma Anymore

Our research team’s mantra has been “expect the unexpected” since the market sell off began in earnest in early March.  That is because this downcycle has begun with an unprecedented collapse in a wide range of business activities at a time when the world has never been awash in more debt, at least during peace time.  In our view even, prior to the onset of the Coronavirus pandemic the economic and financial environment was regularly delivering the unexpected.  Negative interest rates, US Federal Reserve support required for the repo market amidst a supposedly booming economy, multi-billion-dollar valuations for companies that appear to have little prospect of making money for many years into the future, just to name a few.

Now, perhaps the biggest shocker of all, so far, was this week’s move to negative crude oil prices in the U.S.  The April benchmark CME West Texas Intermediate Crude Oil contract (WTI) expired at a price of -37.63 dollars per barrel.  No, the minus sign is not a misprint.  The seller of the oil had to pay $37.63 to the buyer in order to satisfy the contract.  I’m not sure which is stranger, that or negative interest rates but I do know both appear to be indicative of a bizarre financial environment.

So, what happened in WTI crude oil this week?  Cushing, Oklahoma is a very important place to the oil markets.  This is true even though its oil production boom petered out in the 1920’s and its last refinery closed many years ago.   What remained was a storage facility and several pipelines that led into and out of the area.  Over the years, because of the town’s central location, these were expanded and added to.  Ultimately, the combined terminals and pipelines were so important to the North American crude market that the area was designated as the delivery point for the New York Mercantile Exchange’s benchmark WTI contract.  This grade of light sweet crude oil whose price is determined on that exchange is the defacto “oil price” in the United States.  Worldwide it competes with another heavy weight oil contract, Brent Crude which is traded in London.

Futures trading in commodities is important because it enables producers to gain more price certainty and thus de-risk the capital they spend on production.  In the 1800’s, the Chicago Board of Trade developed into the first modern commodity exchange and, interestingly, its first contract was not wheat or corn as is widely believed, but oats, the transportation fuel of the time.   With good credit, a farmer could borrow to purchase seed and immediately lock in the price he would receive for the harvest.  There was an agreed upon mechanism for how and what quality the farmer was required to deliver to satisfy the contract.  The purchaser, who needed the oats, was responsible to pay upon delivery at the specified location.

The same holds true today, at least with respect to WTI.  Since 1983, the holder of a WTI futures contract is required to deliver the specified amount of the proper grade crude oil to a designated storage facility at Cushing upon the expiration of the contract.   The uses of futures contracts are more complex today than they were in the 1800’s.  Today, futures are often used as a mechanism to manage price and inventory of complex producer/consumer supply chains over volatile economic cycles.  For example, in the case of crude oil, the futures market is a mechanism to manage the supply of oil wells that are, in the aggregate, relatively constant.  Oil that comes out of a well can either be sold immediately or stored.  When demand is very high the futures market encourages crude to be used rather than stored.   It does this by providing a price for nearby consumption that is higher than the future price.  Storage costs money.   If a producer can receive a high price this month and avoid storage costs, then the producer will likely do so.  That situation is illustrated by the red line in the chart below which shows the price from two months ago of every WTI oil futures contract from the immediate one out to 2030 and beyond.  This is known as the futures curve.  Just two months ago, the market needed oil.  Producers were encouraged to sell immediately rather than put their oil into storage.  If they did choose to store their oil, they not only had to pay for storage, but they also received a lower price than if they sold immediately as the chart shows.

The chart also shows today’s futures curve in blue.  In just two months it has flipped around. 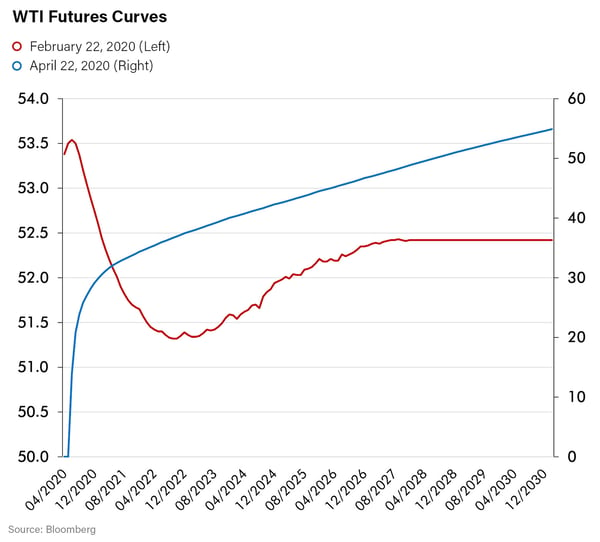 When demand collapses and customers no longer need crude oil, the futures market immediately kicks in to encourage storage.  The price falls to satisfy current demand as well as pay for storage.   Thus, the futures curve looks like the blue line above.  It slopes up and to the right.  One can buy cheap, store the oil and receive a higher price later.  When storage begins to get filled the front contract price needs to fall further to enable the holders of that crude to find storage, which, understandably becomes more expensive.  They must get paid more by a steeper futures curve that enables them to buy lower and sell higher in the future.  Ultimately storage facilities could run out.  If that were the case what would happen to the crude coming out of the oil wells?  Until this week that question was theoretical.  Now we know.  Prices can, at least temporarily, go negative.

In the nearly quarter century I have followed the oil markets there have been two other times that the futures curve got very steep and there was a lot of chatter about the market getting to full storage and what might happen then.  It did not happen, full storage was not reached.  It hasn’t happened this time either for the worldwide crude oil market . . . but it happened on Monday in Cushing, Oklahoma.

How We got a Negative Oil Price

What occurred this week was that all the storage tanks at Cushing were completely full.  Every month since 1983 at expiration the obligation of taking delivery was transferred to the storage tank operators and the financial buyers and sellers were able to settle financially.  This month that was not possible.  The storage tanks could not take the oil.  So, with an obligation to take oil that they could not accommodate, owners of the contracts were forced to scramble to unload the contracts on someone else.  Ultimately, they were able to sell but at a very steep price to themselves.  Instead of receiving money for their crude oil, they had to pay someone to take it!  Those payments likely caused bankruptcy for some oil traders.  Interactive Brokers LLC noted on Tuesday that they had customers who were wiped out leaving their company with an $80 million liability. It is likely over the next few days we will find out about others similarly harmed.  Investors are learning a lesson that we learned long ago: expect the unexpected in a big downcycle.

Although storage at Cushing is full, it is not the case that the world is out of storage capacity – at least not yet.  According to the analysis of Goldman Sachs illustrated below, worldwide storage capacity is 10 billion barrels of oil (not including strategic reserves controlled by governments, which are largely already full).  There appears to be around three billion barrels of spare storage but at the current rate of over production relative to demand that will run out fast, probably by early summer.   When we see oil tanker rates exceed all time highs, that will probably signal when the world is very close to running out of storage, because that is the last and most expensive option for producers to find storage – store the oil on boats at sea. 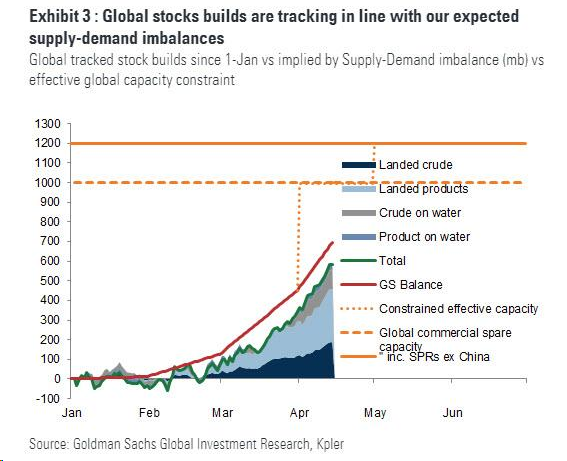 What Happens At Full Storage

Sustained negative oil prices are unlikely because when there is no spare storage oil will be stored beneath the ground in the wells that now produce the oil.  Producing wells will simply be shut down.  The price at which this will happen will be the cost of pumping oil of the highest cost wells until enough of them are shut down to balance the market.  According to the table below this should be at around $15 per barrel.  If labor and other costs fall due to recessionary conditions, that number could fall as well.

At prices at or near that level it is unlikely any new domestic shale wells will be drilled and very little capital will be spent on oil services anywhere in the world.  Not a good outcome for owners of those assets.

What happened this week does not mean crude oil is worthless (or worth negative dollars).   Rather what it proves is that current changes in economic activity are quite severe.  Remember it’s not called the “theory” of supply and demand, it’s called the law – for a reason.  Now you know why.

For oil, unless there is a dramatic change soon, previously unthinkably low prices may be sustained for a long enough time to dramatically alter the oil industry.  The lesson is to expect the unexpected – not just in oil.  There are many vulnerable points in a world economy that is seeing such a drastic decrease in economic activity.  Banks, particularly international ones without large capital cushions are one such example we fear.  Emerging market companies with dollar denominated debt may be yet another.  One could easily see the equity markets refusing to continue funding cash flow negative unicorns who recently came public.  Will restaurants, sports stadiums or even office buildings be filled like they were before until science (or nature) provides immunity to COVID-19?  The list of assets to worry about is pretty long now.  As the oil market showed this week, expect the heretofore unexpected and position portfolios with that in mind.  Our research team has learned that lesson and is operating accordingly.