We Are All Emerging Markets Now

Have Emerging Market Countries Matured to Be More Like Developed Countries or Has the Opposite Occurred?

Bet you can’t guess which major stock market has been the best performing in the world over the past year?  The answer, surprisingly, is Russia. Russia? Isn’t that the emerging market economy whose prosperity, presumably, is dependent on oil, gas and arms sales? Oil prices have been low, and haven’t their arms sales been constrained by crippling sanctions imposed by the major developed economies of the United States and the European Union? Is it possible that the Russian economy is performing so well? 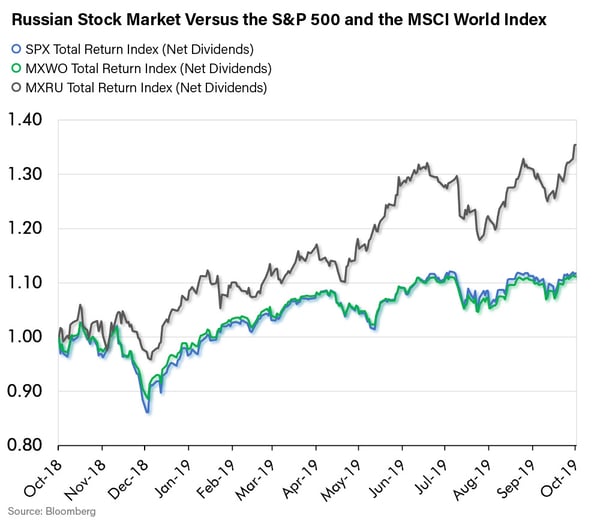 As I sat at my desk and pondered how strong Russia has been, a story crossed the Bloomberg news wire about the mushrooming controversy between China and the National Basketball Association (NBA). One of the NBA’s general managers tweeted his support on social media for the Hong Kong pro-democracy protests.  This angered China immensely. The NBA leadership - even its star player - Lebron James, seemingly groveled to China to make amends. The impression the story gave was that anything was on the table in order to placate angry Communists in China. Did that mean throwing under the bus the deeply rooted American values of supporting free speech and political freedom?

These two observations suggest a larger point. Perhaps the differences between the emerging market countries and the developed world have narrowed a lot.  Just look at the contrast. The Russian economy has diversified enough to withstand low commodity prices and Western sanctions while businesses in the United States appear to be terrified of offending Chinese Communists. It seems the world has changed.

Developed economies have traditionally been defined as those with higher GDP per capita, greater income equality, higher technological capability as well as more stable and more democratic political systems that respect the rule of law. Conventional wisdom seemed to assume that developed economies would remain developed, while emerging economies worked hard to catch up to their standards. But is that what really is happening?

Perhaps the opposite is occurring. Are developed markets losing their former advantages and becoming more like emerging markets? If so, what are the investment implications? Emerging market equities tend to trade at a discount to developed markets, despite higher expected growth rates, due to the supposed institutional deficiencies noted above. But, if developed economies are becoming more like emerging ones, is that discount really warranted?

It seems that many of the prior distinctions that separated developed and developing countries have fallen away. The most obvious is the erosion of the middle class. Its loss has been a Third World like concentration of wealth in the hands of a few and a swelling of the ranks of the poor. That’s very much like emerging markets as the chart below illustrates.

Another common characteristic of developing economies has been high sovereign debt levels. Yet, today, debt levels in the developed economies are more consistent with those historically seen in chronic emerging market defaulters.

The political organization and decision making in the developed world appears to be moving in the wrong direction as well.  At the beginning of my career the term “crony capitalism” was coined as a partial explanation for the Asia crisis of 1997 which saw the collapse of the “Asian Tiger” emerging economies of South Korea, Indonesia, Thailand and the Philippines. The term referred to abuses in those countries that made what appeared to be capitalism into a system that was far less efficient and virtuous.  Capitalism – the ideal – is an unbiased system that rewards and punishes risk-taking through fair competition and the work of Adam Smith’s “Invisible Hand.”  Yet during the post 1997 collapse in Asia critics noted that political influence and connections had distorted the outcomes that would have occurred in a true capitalist system.  The negative outcome in these once high-flying countries was at least in part attributed to the crony capitalism that harmed their economies. Our political and economic leaders scolded the discredited leaders of those countries.  After all, we believed our institutions were superior and did not function that way.

Unfortunately, it seems that the United States and much of the rest of the developed world has fallen short of its former ideals. Many aspects of our current system feel uncomfortably similar to the crony capitalism we once derided.  A 2014 study by Martin Gilen and Benjamin Page of Princeton and Northwestern, respectively concluded that the United States was an oligarchy not a democracy. They examined the influence that money and connections have in creating and modifying legislation and regulation and concluded that those factors matter a lot more than what the majority of citizens want and need. More recently, a book by Peter Schwiezer, Secret Empires, describes how members of our political class (from both parties) use their positions to enrich themselves and their families. News from today’s headlines seems to support his position.

Certainly, one can argue that the government’s and especially the U.S. Federal Reserve’s support for the banking industry in the Global Financial Crisis was an egregious example of crony capitalism. Bankers were shielded from the negative consequences of their decisions – thanks to taxpayers. Doesn’t that sound like something we would have expected to see in emerging economies? Oh, the moral hazard! But we did it anyway.

This situation has led, more recently, to another characteristic of many developed markets:  the schism between the politics supported by the business elite and other extreme forms, usually populism or socialism.  In the United States, a populist President was elected in 2016. During the same election, for the first time in memory, an unabashed socialist made a serious run for a major party nomination. Going into the 2020 election cycle, the left most party in both the United States and Great Britain has leaders who are openly calling for the transfer of large ownership positions in public companies to their workers. This appears to be a far cry from the developed world’s devotion to free market capitalism that was widely supported only 20 years ago.

If this theory is correct, the investment implication could be that the differences between developed and developing market securities may be a lot less than consensus believes. As noted above, typically, developed markets trade at higher valuations because of their supposed advantages - despite the fact that their underlying economies tend to grow more slowly than emerging ones. Is this a misplaced assumption driving a material mispricing in today’s markets?

Our investment views will never be informed solely by the hypothesis that the valuation discount in emerging markets versus more developed markets is extreme and may narrow. However, perhaps, when evaluating securities and valuing them, we should be more open to the values we find in emerging markets.

For example, in trying to make our investments more defensive, we have looked for undervalued stocks that are leaders in their industry, generate robust free cash flows, return that free cash flow to shareholders and maintain strong balance sheets. Our research has identified many such companies around the world in emerging markets. Often, we end up passing on investing in those companies, because of concerns about the risks of investing in their home countries. Yet there is a price for everything, as it’s our job to seek the best returns with the least risk. Are we over-estimating the risk of these companies because of their countries? Certainly, in retrospect, the market found value in Russian companies and awarded them with world-beating performance over the past year. By most measures, the Russian market remains extremely cheap. The same could be said for many long-underperforming emerging markets.

If investors identify a regulated utility in Brazil, a world-leading energy company in Russia, a telecom services provider in South Korea, or a Mexican consumer staples company, might not those opportunities justify an investment? At the right price, we believe that they should earn a place in a diversified portfolio. Is there political risk in those countries? Of course. But even here in the United States we are – sadly – not immune to similar risks. When does the strength and stability implied by higher developed market valuations become a liability? When does a prudent investor embrace emerging markets, warts and all, because the warts are not that much different than elsewhere, and the values are too great to ignore? As a research team, we find ourselves asking this question more and more.

The long sweep of history teaches that change is constant. This is certainly true for nations. There have always been nations that were in the lead in terms of political and economic systems and those that lagged.  Often the laggards would catch up or the leaders would falter, or both. It seems that the yawning gulf that once separated developed markets from emerging markets is narrowing substantially. That is important to recognize because its investment implications can be profound. It argues for a greater allocation to developing markets that have been weighted lighter in the past and it suggests we should be perhaps more careful about the developed world political risk we now take for granted.