Maybe it does not seem strange to others, but it seems odd to me that business schools do not teach financial and economic history. To the extent those subjects are taught, they generally take place in the history department. However, there are surprisingly few historians who are devoted to those topics. Usually their study is tangential to the social, political, or military happenings that are at the center of the historian’s interest. When I was an undergraduate at Wharton, there was one class offered called “the history of finance.” Very few students took it. I was one who did.

It changed my life. It caused me to see the financial and economic theories learned in the traditional classes in an entirely different light. All that was being taught in the traditional disciplines was merely trying to explain what had been going on all along. Stocks, bonds, and other assets were being priced long before Modigliani, Miller and Sharpe came up with the theories used today to do just that.

It also made me understand that economic cycles had been going on a long time and that problems like the ones today had been dealt with far differently in certain previous cycles. Financial and economic problems did not start with the stock market crash of 1929, which is pretty much the prevailing time frame studied today.

After that I often argued that business schools needed financial history to be a part of their academic requirements. I believe there is a good probability that had that been the case, today’s fragile conditions might not exist. Later, while I was in graduate business school in the mid 1990’s a young historian from Glasgow name Niall Ferguson began publishing books on financial history. No doubt, he noticed the same thing I did … there was a vacuum in scholarship on the subject. I read one of his early works, “The House of Rothschild, Money’s Prophets” and was hooked.   Most of his early works were exclusively on financial or economic aspects of history although he soon branched out to more comprehensive examinations of the past.   His seminal work on financial history is “the Ascent of Money” published in 2008, right before the great financial crisis, which may, in retrospect, be viewed as the beginning of the descent of money. It is well worth the time to read.

In my opinion, Niall Ferguson is the greatest historian of my generation. His insight into today’s problems through exploring similarities with past periods is unparalleled. It certainly is with respect to the problems of polarization besetting America today. You might agree after watching the linked video of a recent lecture he gave on the subject. Link: https://www.youtube.com/watch?v=yLiPPtxKRAA.

Ferguson argues that today closely resembles the 1500’s soon after the printing press was invented. The development of that technology and the development of the personal computer and internet have striking similarities. Both periods heralded a dramatic increase in content dissemination. The graphs below tell the story.

As Mr. Ferguson notes, the only difference is the time scale. Things are happening roughly 13 times faster today than in the middle ages.

He argues that the printing press led to substantial and ultimately deadly polarization. Although at first the cheap and abundant spread of books, particularly the bible, was expected to lead to a new era of enlightenment and progress. Unfortunately, quite the opposite occurred. New ideas were disseminated that clashed with the established ideas and “fake news” proliferated. A book on the ubiquity of witches amongst the populations of Europe was one of the best sellers of the time, to name one example. Pretty soon Europe was divided into polarized religious factions that viewed each other as heretics. There was no common ground, no discussion, just your view is evil and mine is righteous. Sound familiar? As Ferguson notes people simply yelled at each other: “you’re a heretic! No you’re a heretic!”

Of course, the scary part is that Mr. Ferguson notes how things eventually escalated from violent rhetoric to actual violence. I pray we are not at such a point now, but it is not something to dismiss as a possibility. 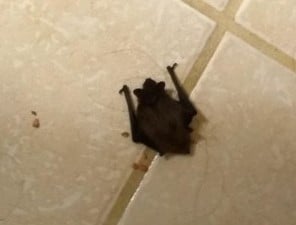 What are we as investment managers to do with such information? The first is that since the chance of bad outcomes from polarization are not zero, wealth management plans should incorporate protection against such extreme outcomes. I recently was confronted by a nearly dead bat on my bathroom floor. Given that I heard strange noises in my apartment several days earlier, it appeared that I had been living with a bat for at least a few days. The likelihood that the bat was rabid, and it had bitten me was extremely low. However, if somehow, while I was asleep, a rabid bat scratched me and transmitted the disease, I would have a 100% chance of death. So, I went to the hospital and received the Rabies vaccination protocol, which is both painful and time consuming.

Similarly, investors should be willing to endure some pain in the form of what may prove to be temporary underperformance for protection against the worst, albeit unlikely outcomes. The current political environment justifies such caution. Over the summer there was substantial violence on our nation’s streets. The possibility of more serious violence, although low, is not zero. Its prudent to take a rabies shot. A similar exercise applied to a portfolio may have downside in the form of potentially foregoing some upside. In investing, protecting against risk often means foregoing some reward, even for the most astute investors.  To our way of thinking, this is performance deferred rather than performance lost!

The second thing investors should do is look for opportunity. No matter what environment confronts humankind there is always opportunity for those who are aware and receptive to change. We see possibilities in the ever-increasing polarization that was probably accelerated by the recent presidential election.   For instance, it is possible that we will see a rapid acceleration of penetration of non-traditional media outlets as well as technology platforms. It seems to be already happening. The most downloaded app since late October has been a new competitor to Twitter called “Parler.” Below are the top downloads from one day this month. Most days in the past few weeks have looked the same. 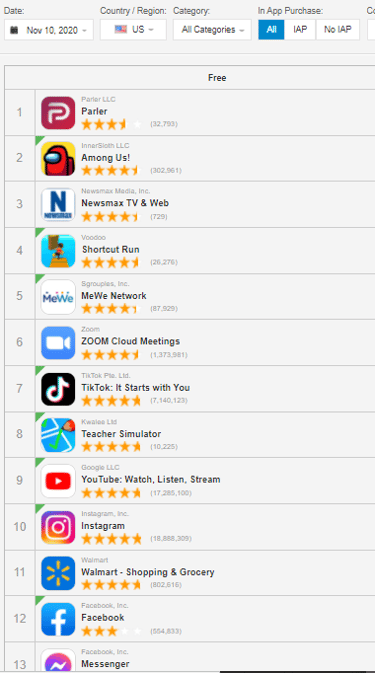 Parler appears to be gaining users amongst people who believe Twitter censors user content based on political views. The company has substantial financial backing from a prominent hedge fund family and some well-known commentators have gathered millions of followers on it in just the past few weeks. In fact, several prominent users already have more followers on Parler than Twitter. A platform called “Rumble,” which is a competitor to YouTube, has also seen similar rapid growth. There may be opportunities for investments based on this theme.

In addition, the phenomenon may cause slower and possibly negative growth for some legacy players. This may be a tailwind to our expectation of a revival of value versus growth stocks which was discussed recently on our Market Happy Hour. Several growth stocks that have accounted for a substantial portion of the markets’ increase are media or platform companies that could suffer on a relative basis.

Companies in other industries might be impacted as well. Companies who delve into the political arena may be rewarded or made to suffer by one side or the other in this environment. That was evident in some of the calls for boycotts, counter boycotts and support campaigns that were heard during the height of the protests this past summer.  There is no reason to believe that sort of thing will not continue and have a material impact in some cases. It certainly is something to analyze.

This is a very tricky investment climate to navigate. Our first concern is risk management, protecting downside. We think this is prudent in such a potentially volatile environment. Our next concern is to remain open minded enough to understand all significant economic trends, including ones that may be uncomfortable for one side or the other in this increasingly polarized environment. We think we owe it to our clients and our craft to make recommendations based on economic considerations and to invest accordingly.

As Niall Ferguson’s has demonstrated, history can be a useful guide. Often it does not tell you what you expected nor wanted to hear. Nevertheless, it is far better to understand things as they are rather than as we would like them to be. In this situation, Mr. Ferguson’s insight appears to be useful to consider. We are listening and trying to learn. We think you should do the same.

CWA Asset Management Group, LLC is an SEC-registered investment adviser, doing business as Capital Wealth Advisors and as blueharbor wealth advisors.  Fundamental Global Investors, LLC is a SEC-registered investment adviser that is affiliated with CWA Asset Management Group, LLC. Information presented is for educational purposes only and does not intend to make an offer or solicitation for the sale or purchase of any specific securities, investments, or investment strategies. Clients of CWA or Fundamental Global Funds may hold a position in securities mentioned within the articles. Investments involve risk and unless otherwise stated, are not guaranteed. Nothing herein should be interpreted as investment advice. Be sure to first consult with a qualified financial adviser and/or tax professional before implementing any strategy discussed herein. Specific companies or securities described in this report are meant to be illustrative of investment style. Such case studies are not meant to be, and may not be, representative of any portfolio or holdings of CWA Asset Management Group, LLC, or Fundamental Global Investors, LLC.