"Somehow you’ll escape all that waiting and staying. You’ll find the bright places where Boom Bands are playing” - Dr. Seuss from Oh the Places You’ll Go

On April 25, 2019, approximately two years ago, we wrote a bullish piece on natural gas. We examined how the supply and demand picture had conspired to depress prices and how many of those factors were beginning to change. However, we acknowledged that natural gas was in the “waiting place” as described in the Dr. Suess book cited in the quote above. We thought that it was not clear when the right combination of fundamental and market factors would occur that would help natural gas realize the bullish thesis we saw unfolding. Often, we are early, and that appeared to be such a time.

Fast forward two years later to today. As Dr. Suess forecasts, when you are in the waiting place, you will escape. Now, with a backdrop of equity markets and gold appreciating more than 40% relative to natural gas, other commodities exploding to new all-time highs and the supply/demand fundamentals appearing much more in gas’ favor, we think this time natural gas may escape all that waiting and staying. In our opinion, a bull market in gas is poised to begin.

The Thesis Starts with Our Theory of Relativity

Our research department has written extensively on the Dow to Gold ratio. This is an index that expresses the value of the Dow Jones Industrial Average (DJIA) in terms of gold (by dividing the DJIA by the price of one ounce of gold). It has been used for over a century as a yardstick to measure the relative expensiveness of the equity market to gold. It currently sits at more than 18x which is well above its 11.7x average since the 1920’s and even more above the 5x or so it usually gets to at the top of gold bull markets. 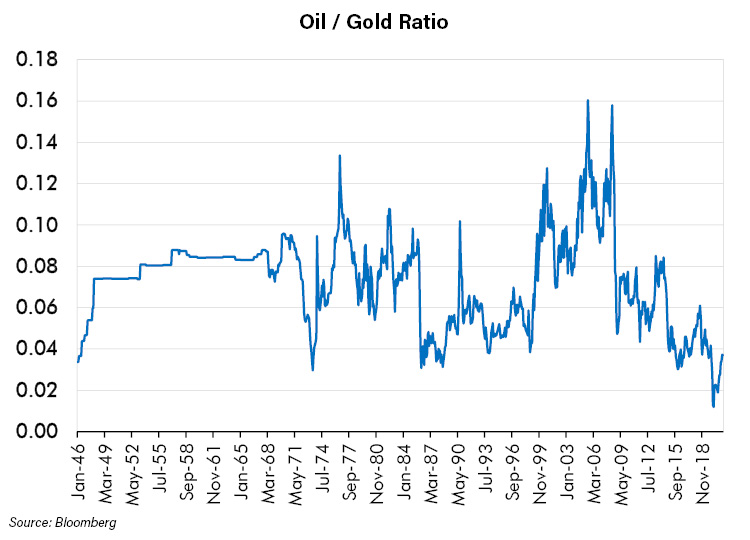 Our theory of relativity is this:

The chart below illustrates those relationships. 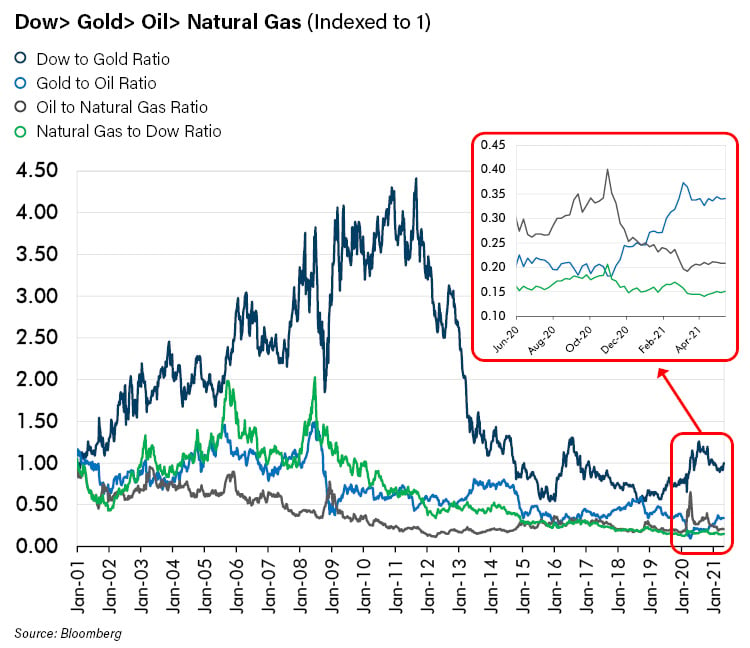 What About the Fundamentals?

We’ve established our view that natural gas is very cheap relative to several noteworthy assets. However, that has been the case for quite some time. What is it about the present situation that makes us think the commodity is finally going to thrive now? The answer is that evidence is piling up that many of the supply shortfalls and demand increases we predicted a few years ago are happening and some, to a greater degree than expected. The clearest indication is the rapid decline in what were bloated inventory levels prior to this past winter’s heating season. This happened despite a 5% warmer than normal winter.

On the supply side, all indications are that the low gas and oil rig counts (the industry jargon for the number of drilling rigs that are searching for oil and gas) are having a material impact on production. What seems to be different than expected is the magnitude. It appears that productivity per well has not increased in this rig downturn as it usually does. In past downturns, as companies dropped rigs, they concentrated on better drilling locations and therefore the productivity of their remaining drilling increased. This does not appear to be happening during the current downturn. Perhaps the best shale gas prospects had already been drilled during the production boom of the preceding years? Perhaps the best geology in the productive areas like the Haynesville and Marcellus shales has been drilled and these fields are succumbing to the inevitable declines all hydrocarbon fields, including shale fields, eventually must experience? The Barnett and Fayetteville shales, leading producers a decade ago, are now producing 60% less than what they were at their peak. It is our opinion that the market is underestimating the shortfalls that may occur.

On the demand side the situation is very robust. This is no surprise given the high gas prices outside North America. In Germany, gas is currently over $9 per mmcf – more than three times the price in North America. In Japan it is $7.5 per mmcf, approximately two and a half times the North America price. These price premiums are driving an acceleration in liquified natural gas (LNG) capacity. It is our understanding that two LNG export terminals have been accelerated and are coming online over the summer to capture the higher price available overseas. This should add unexpected demand. In addition, with the opening of two new pipelines and a compression station for gas into Mexico, exports to that country have nearly doubled and are adding nearly 4% to demand with another nearly 1% later this year when another pipeline opens.   The exporting of natural gas from the United States is growing dramatically and we believe it will likely continue to do so.

One of the few factors seemingly holding back gas prices is that it appears, with respect to electricity generation demand, that consensus opinion is expecting demand declines over the summer.   Those making those projections assume economic activity will remain muted and that utilities will run their coal plants harder because, with the recent strength in natural gas, it is economic to use coal instead of natural gas. However, two of our most trusted natural gas and utility analysts have a different opinion. They think there will be an upside surprise in utility gas usage over the coming summer.

We believe the aforementioned factors will impact gas positively in the short run. Over the medium to longer term certain other bullish realities are, in our opinion, becoming clearer which may cause investor psychology on the gas price to improve. The prevailing expectation that renewable fuels will cause gas demand in electricity generation to decline appears to be misplaced. Despite what the Department of Energy and most Wall Street analysts may be forecasting, the utilities themselves are projecting that their internal gas usage for electricity generation is going to rise over the next five years. Wolfe Research recently examined the actual filings by utilities of their five-year resource plans with the Public Utility Commissions that regulate them. Adding all of those together they concluded gas demand for electricity was going to grow.   Giving more credence to that contention is a slide from a presentation from our longtime friends, the trusted observers at Energy Income Partners, an investment firm that specializes in energy infrastructure. 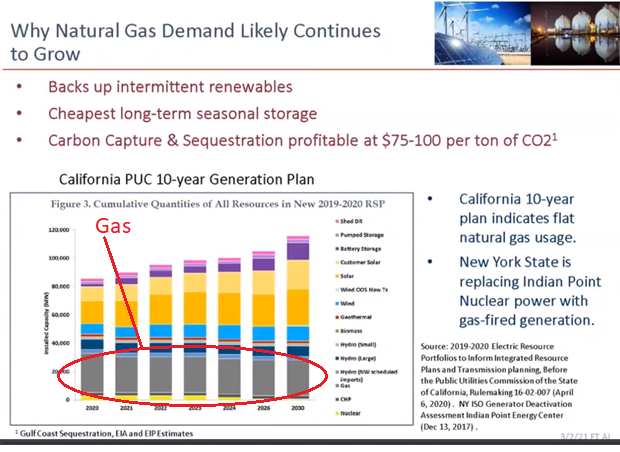 This slide points out that California and New York, two of the states whose politics require maximum adherence to de-carbonization, intend to keep gas usage flat or even grow. In New York’s case it is secretly building natural gas-fired generation to replace the Indian Point nuclear plant that is being shut down.   We would not be surprised if the same occurs at many of the other 21 nuclear plants that are being decommissioned around the United States.

All this is not surprising given what we have studied regarding the substitution of renewable sources of electricity generation such as wind and solar instead of coal and natural gas. Although in some places renewables are economic without government subsidies when compared to electricity generated by hydrocarbons, their inability to run constantly, changes the equation. Windmills require wind and solar requires sun to produce electricity so the full cost of these electricity generators must include the cost of battery storage for twenty-four-hour operation. Again, referencing work from our friends at Energy Income Partners, California itself has concluded that even with battery costs declining 50% from where they are today, renewable electricity would be substantially uneconomic at greater than 50% of power generation. 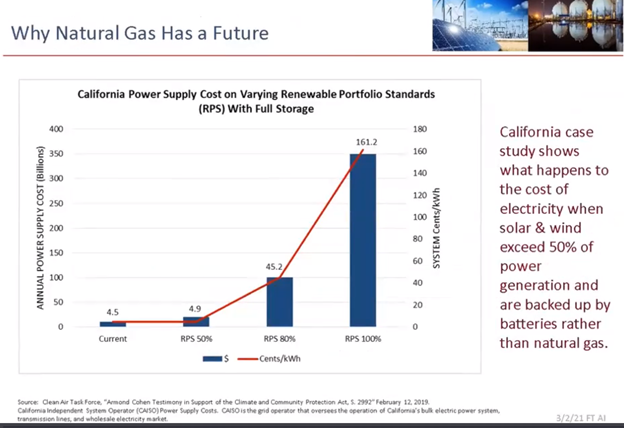 For this to change, battery technology would need to decline in price substantially more than 50%, something that we do not believe is likely in our investable time horizon. For that reason, renewable electricity generation will continue to need support from baseload power. Since natural gas is the cheapest, and importantly, the cleanest baseload generation possible (unless new nuclear plants are commissioned), its usage should continue to rise. Additionally, we note that several new technologies are emerging that would capture more (if not all) carbon from gas-fired power generators. If this were to be the case it is likely gas demand would increase more than expected.

Our investment philosophy starts with the premise that caution is the most important virtue. The future is uncertain and predicting it is hard. Anyone who thinks otherwise is foolish. However, with many years of studious examination of the economic, social and investment system we live in we believe we can enhance our odds of guessing correctly. A keen understanding of history through scholarly analysis can help as well. The odds can then be enhanced by careful analysis of the particular investment being considered. Ultimately, even the most cautious investor must trust the odds they have calculated and deploy capital accordingly. Now is the time to do so with natural gas. In our opinion, it is cheap, fundamentals are improving and consensus opinion for its future appears to underappreciate several important facts. So, we are exiting the waiting place and expecting natural gas to find the bright places where Boom Bands are playing.