On Boring Bonehead Questions … and the Importance of Trust

In investing, trust is everything.  Especially the trust between investors and the management teams that run the companies in whom they invest. On May 3rd, in a now famously bizarre Tesla (TSLA) quarterly earnings conference call, the company’s CEO, Elon Musk refused to answer a very reasonable question from a Wall Street analyst by calling it a “boring bonehead question.” When the stock opened for trading the next day, its price fell nearly 10%. Later that day a research analyst from a major New York investment bank tweeted the following:

“Tesla’s 1Q18 conference call was arguably the most unusual call I have experienced in 20 years on the sell side.  Many investors we spoke with post the call agree.”

Well, this swirling controversy reminds me of a quarterly earnings conference call that was even more unusual. The call was in April of 2001. Jeff Skilling, the CEO of Enron, responded to a question from an analyst with "well, thank you very much, we appreciate that ... asshole.” We apologize for including the verbatim crassness of Mr. Skilling’s profane remarks, but we thought it necessary to show how unusual that earnings call was.  It got as much press as the recent Tesla earnings call. Enron’s stock dropped immediately, as did Tesla’s following Musk’s recent infamous response. Less than a year later Enron filed for bankruptcy.  At the time it was the largest bankruptcy in American history.

Of course, Enron’s management team used accounting tricks and fraud to hide billions in debt.  This debt, and we believe investors’ failing trust in management, is what sank Enron.  We are by no means suggesting anything like that with respect to Tesla.   We are, however, mentioning Enron in connection to the Tesla call simply because of the parallels with the conference calls themselves and how management’s behavior on a call can give insight into a company’s leadership. 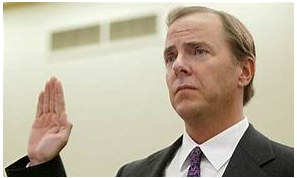 Jeff Skilling, CEO of Enron, Swearing to tell the truth

Enron in My Life

People with a connection to Enron played an important role in my professional life.  The first hedge fund for which I worked received its initial seed funding from Enron and many former Enron professionals worked at LDH Energy (now Castleton Commodities) when Lewis and I worked there. Through those experiences I came to know many great, hardworking and highly ethical people who at one time worked at Enron. Tempting me from the role at LDH Energy was the opportunity to work with my friend Doug Millet in a new venture he was launching.  Doug had worked for the firm of famous short-seller Jim Chanos’ at Kynikos Associates which was known as the firm that “discovered” Enron as a short. In fact, my understanding is that Doug played the key role in identifying problems at Enron.

Bethany Mclean, who wrote a now famous Fortune Magazine article “Is Enron Overpriced” did so after speaking with Doug and his team.  She described the interaction with Doug in her book “The Smartest Guys in the Room,” which is well worth a read. In it she recalls that Doug memorably said, explaining why Enron failed, “it simply didn’t make very much money.”

In today’s public markets we believe that there are a lot of companies that are trading for very high valuations who simply don’t make very much money. In the S&P 500 Index, which is an index that consists of the blue chips of American industry, sixty companies had negative earnings per share over the past 12 months. During the eighth year of an economic expansion more than 10% of the top 500 companies in the market did not make any money at all!

In fact, one hundred and six companies have negative free cash flow (cash flow after capital expenditures). There are many more companies that although cash flow is positive, do not make “very much money.”

There are plenty of reasons a company may currently earn little or no money but still be highly valued. The most common is that investors trust that the company’s growth will be robust enough to allow it to earn acceptable returns in the future.

That faith is based on several factors, probably the most important of which is trust in management and the information it is providing. As one sell side analyst who remained bullish on Enron was quoted in Mclean’s article “in the end . . . [Enron] boils down to a question of faith.” That analyst had faith in what he was being told by Enron’s management. He continued to recommend the stock up until the bitter end as did several other prominent Wall Street researchers. His trust was misplaced.

To Trust or Not to Trust, that is the Question

Managing the savings of others is a duty that we do not take lightly.  It demands all the skill and craft we possess to thoughtfully manage those savings. That money came from hard work and sweat. Is there really any other way of looking at it? We think that the same integrity should be demanded of the company management teams charged with running the companies in which we invest.

Over the past two generations, public company managers have seen their incentives change markedly. Now they are increasingly skewed towards near term stock price performance.  The financial rewards of those incentives can be powerful enough to induce some to slide down the slippery slope of ethical decision making. Some, like a few top managers at Enron did even go so far as to cross over the line into criminal behavior.

We would argue also that, sadly, today’s social cohesion and value systems are not what they used to be. We fear that it’s now easier for folks to be tempted to cross over the line, or at the least seem to hold the full weight of fiduciary duty in less regard.

Clearly, trusting Enron’s management proved to be a bad idea. Yet many prominent investors did so. I am forever haunted by the memories of Enron and its lies. I cannot shake it.  It is not in my skeptical DNA to trust management teams easily, even less so when I see management teams treating sell-side analysts with the same cavalier disregard that Enron did.

As analysts we study prospective investments. We read financial statements to see for ourselves if the numbers publicized in the press are worthy of our trust. Certainly, Enron’s example showed an unhealthy gap between perception and the darker reality that our friend Doug identified.

However, in my experience, the most serious red flags are often the “body language” of management. These can include overly optimistic statements, especially from managers who have a history of such, or actions like borrowing against their shares which might indicate a desire to hide the more transparent and overtly negative signal of selling their shares outright. Another sign is when management appears to have an unhealthy vendetta against short sellers and their criticism. When present my skeptical mind immediately asks, “Does this mean that management would rather suppress information than address it?”

Management’s overly emotional responses to reasonable questions from investors or analysts can often be a subtle tell. Of course, when they are not so subtle, such as in 2001 on the Enron call, or more recently on the Tesla call, skeptically minded investors cannot be blamed for asking why management is acting this way.

The future path of Tesla’s share price is a much-debated topic amongst our research team. Among all the things about which reasonable people can disagree, surely none is more reasonable than an unknowable future. My own questions go a step further and ponder if I can bring myself to trust Elon Musk. It’s nothing against him. None of us can stare into the depths of anyone’s soul and see truth. We make the best judgements that we can, which is highly colored by our experience.

Tesla’s cars draw rave reviews from their owners, including those on our team who enthusiastically own them. Clearly, Tesla is highly innovative, with a big scale advantage in battery technology. It also seems reasonable to expect growth in fully electric cars could be a powerful trend.

However, it is a fact that Tesla is currently consuming a lot more cash than it is generating. Should the company need to raise more capital, the issue of investors’ trust in Mr. Musk could become paramount. If so, the critical questions that Mr. Musk dismissed and other uncomfortable ones may require a more complete explanation.

We cannot forget that it takes a lifetime, sometimes several generations of hard work, sacrifice, and prudent decision-making to accumulate wealth. Those who manage that wealth have a solemn responsibility to thoughtfully invest it. When we invest on behalf of others, we look for company management teams who clearly understand that.

Investing is largely about judging an uncertain future. We believe that faith in management is central to patiently and comfortably holding an investment for many years, which is our goal. Faith is all about trust. We do our very best to invest in company management teams who we believe we can trust. Trust, as they say, is everything. •