Utes Could Be Beauts

Thomas Edison is regarded as one of America’s greatest inventors. He had 1,093 United States patents to his name and many European ones as well. Amongst his many well-known inventions were the phonograph and the movie camera. However, he is arguably best known and most impactful for the invention of the light bulb and some of the technology necessary to deliver electric power to those light bulbs. He was an original founder of General Electric (which was first known as Edison Electric) and a multitude of other companies. Many electricity generation and delivery companies that would later become regulated utilities still bear his name including Con Edison (NY), Commonwealth Edison (IL) and Detroit Edison (MI) just to name a few.

Edison’s electricity distribution ideas used a method of electricity delivery called direct current (DC) which had a formidable rival in the form of alternating current (AC). In fact, AC had been invented by Edison’s Serbian born assistant Nikola Tesla. AC current could be transmitted over longer distances, cheaper wires and be converted to current capable of being used in a wider range of applications. DC did not have these advantages. When Tesla could not convince Edison of the superiority of AC, he left the company and partnered with George Westinghouse and the electricity company that bore his name. Westinghouse and General Electric engaged in a fierce competition for whose standard would be adopted. The competition was intense and included the creation of the first electric chair as well as who would win important early contracts to electrify the 1893 World’s Fair in Chicago and the Adams Power Station at Niagara Falls in 1895. Westinghouse won those important contracts and AC became the standard as it remains today in North America, Europe and the world.

Once the standard to be used was determined, capital flowed into the industry and much of North America was electrified in a short period of time. Interestingly, it was a now largely forgotten businessman named Samuel Insull who was most responsible for the growth of the industry, not Edison or Tesla. Insull started as Edison’s personal assistant and was the organizational brains behind Edison and the business of intelligently and efficiently bringing electricity to consumers. With his efforts, by 1914 electricity was a state regulated industry in forty-three states. State level regulation was necessary because of local corruption and other municipal actions such as “takings” of local utilities when prices got too high. A comprehensive study of the early industry reveals the impact of Insull who eventually was bankrupted and disgraced during the Great Depression because his companies took on too much debt during the 1920’s boom. He died penniless in 1938.

Due to a large extent to what happened to Insull’s companies and similarly leveraged ones during the depression, the federal government stepped in and further regulated electricity and power transmission. The federal and state regimes from prior to 1940 largely still exist today. In the 1980’s power generation (though not transmission) was deregulated by the federal government leaving it up to the states whether to keep those businesses regulated. Many states stuck with the regulated model.

It is the regulated utilities that we find interesting because they tend to have more stable earnings and thus pay higher dividends. That makes them more valuable in a world in which interest rates are declining. Also, we believe these utilities are currently cheap relative to their earnings growth profile which should be improving because of the energy transition.

Although it seems just about every financial commentator has been predicting higher interest rates recently, the reality appears to be that interest rates are headed back down again. That started in March of this year. Real interest rates have been particularly hard hit and are now solidly in negative territory again and closing in on their record low from last summer. As we have noted in our research many times before, there is simply too much unproductive debt burdening the economy. Higher rates are incompatible with that scenario. Regulated utilities is a sector that according to our understanding tends to benefit when rates decline. The following chart from 2002-2010 shows clearly, in our opinion, the correlation between the relative performance of the utility index and the iShares Long Term Treasury Bond ETF (TLT) which tracks the performance of long-term United States government bonds. 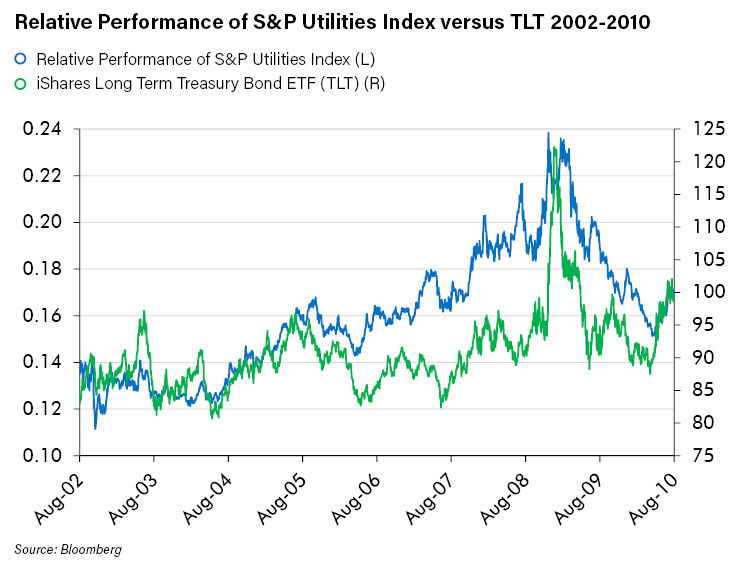 Over the past decade, utilities have underperformed the S&P 500 (which we discuss below) but the correlation of absolute returns to the long treasury bond remains substantial. 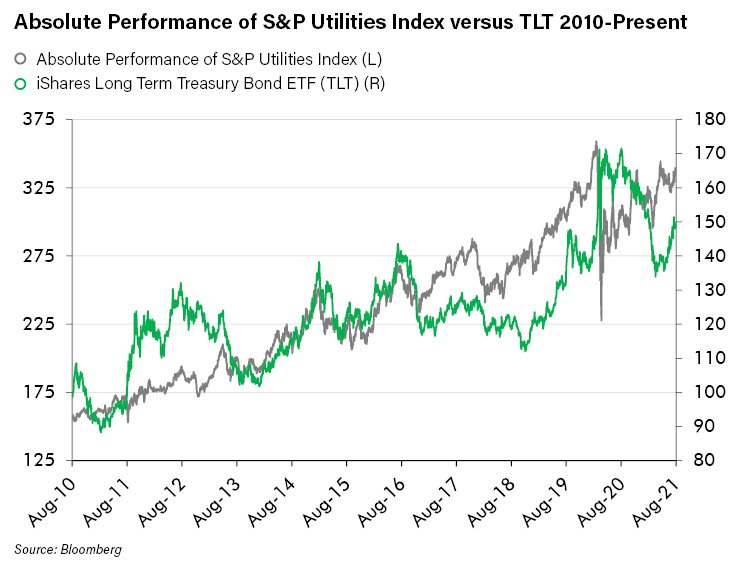 The reasoning behind the correlation is that regulated utilities have stable earnings and dividends and therefore act “bond like” more so than most other equity securities. When interest rates decline, their price tends to rise. So, if one expects treasuries to rise because the economy is slowing – which should also be a negative for stocks, utilities are a good way to get defensive exposure.

Utility Regulation and Its Impact on Earnings

Certain electricity generation assets and all transmission and distribution assets are regulated, mostly by state utility commissions. The state commissions allow the utilities to earn an allowed rate of return on their asset base. This creates a relatively stable earnings stream. If electricity prices fall without a commensurate fall in costs, the utility can recoup the margin decline in order to earn its allowed return. Likewise, they would not be allowed to earn above the allowed return if electricity prices rose while the cost to produce that electricity remained the same. Therefore, the price of electricity or input commodities (such as natural gas) or the volumes produced or consumed have little impact on earnings. This makes for relatively low volatility in earnings and cash flow, a portion of which is paid out in dividends, which are, for the same reason, not volatile. It is this characteristic which makes utilities “bond like” as discussed above.

Nevertheless, utilities are able to grow earnings and several in the sector have done so at a rate that has been near to or in excess of the S&P 500’s growth rate. 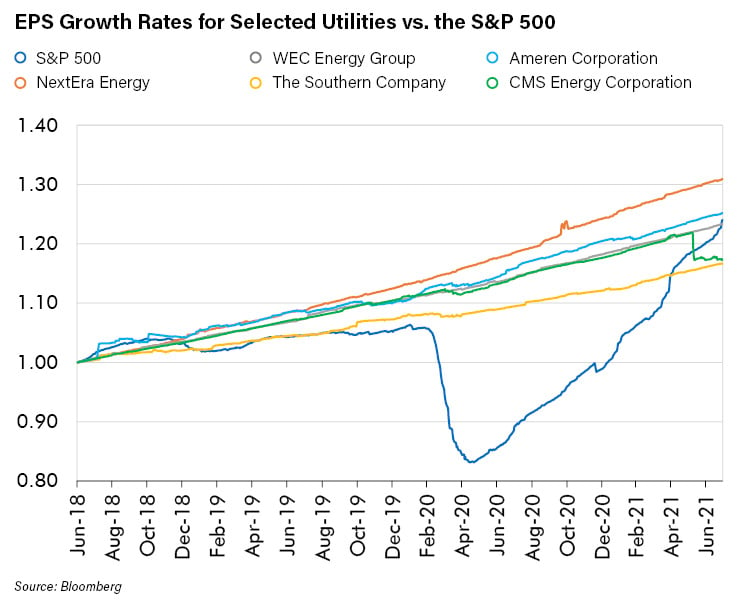 How are utilities able to grow earnings given the way they are regulated? The answer is that they need to invest capital that they are allowed to add to their asset base. They then are allowed to price electricity and other services in order to get the allowable return on the new assets.

This method of growing has worked well for many companies in the sector. Given the growth rates in the chart above, it is surprising that the valuations of these companies are so low. The sector has underperformed the S&P 500 for most of the past decade as, overall, earnings growth has lagged. However, for the companies in the chart above, with earnings growth similar to the index, valuation discounts appear to us to be unwarranted. The average price to earnings multiple (P/E) of those companies is approximately 23 versus 29 for the S&P 500 and the average price to book ratio (P/B) is 2.8 times versus 4.4 times for the S&P 500. So, there is a compelling valuation case to be made for certain utility stocks assuming their forward growth expectations are commensurate with their recent past.

Electricity is central to the decarbonization efforts in North America. The plan is to move all transportation energy needs from gasoline, diesel and eventually jet fuel to electricity that is produced from renewable sources. In order to do that a tremendous amount of new infrastructure needs to be put in place. For example, massive numbers of charging stations for cars, trucks and other vehicles need to be built. In addition, many more renewable electricity generators such as solar and wind farms are needed. These renewable facilities will need state of the art battery farms to store their intermittently produced power so it can be used when needed. The investments in all this infrastructure, if done by utilities, can become part of the rate base upon which an allowable return can be generated. This is the potential driver of earnings growth and given the scale of change that is required, we believe the opportunity is large enough to materially accelerate the earnings of certain utility companies.

The electric utility industry has a long and storied history in the United States. It was founded by people whose names are associated with many prominent companies today. Despite that it fails to get the media attention of high-flying sectors like technology or widely owned sectors like financials, the industry is central to the functioning of all other parts of the economy and needs to carry a large part of the load if society is going to achieve its environmental goals. There are many reasons to be excited about the sector. In the declining interest rate, low yield world we believe will be with us for a very long time (albeit with periodic reversals), it appears to us that the sector offers good dividends and good potential for outperformance relative to the market. That is especially true because a long period of relative underperformance has made the sector cheap, especially with respect to certain companies that have very good near-term earnings growth expectations. Additionally, the sector gives investors exposure to what could be one of the great growth opportunities of the next several years: the transition from a hydrocarbon-based energy system to a renewables-based system. For these reasons, we expect to add more utility exposure to our investment mix.