Mark Twain once said, "History does not repeat itself but it does rhyme."  This week we examine a precedent from 1931 for clues to the political debate underway now in Europe. We consider whether recent elections in Europe are ‘rhyming’ in a way that will matter to the markets.

Elections for the European Union Parliament took place two weeks ago.  Centrist parties viewed as pro-austerity, ‘status quo’ candidates, suffered meaningful losses while previously fringe parties to the far left and far right won big.  The prevailing policies of ‘internal devaluation’ through deflation and austerity were rejected.  Thankfully the study of history provides us with a rich array of similar events, which though unique in our lifetime, have occurred again and again throughout history.  One such example took place in the UK and came to be known as the Invergordon Mutiny of 1931.

The UK was by then six years into a policy of deflation and austerity inaugurated by Winston Churchill, when in 1925 as Chancellor of the Exchequer he re-pegged the Pound at its pre-WWI value.  The UK, like other WWI combatants, had waged an all-out war, inflating its currency and creating huge debts to finance the costly war. In 1925, a bitter debate raged around whether or not the UK should honor its debts in pre-War currency values, or make the burden of debts easier on its economy by devaluing the Pound.  Churchill chose the honor of England and the higher currency value.  It was a decision that he came to bitterly regret.  By overvaluing the Pound, Churchill made the existing burden of real debts heavier.  He also undermined growth and forced a heavy burden on industry to raise productivity in an attempt to remain competitive in global markets despite a strong currency.  Economic growth continued to disappoint during this period of austerity.  Round after round of tax hikes and budget cuts were called for to try to balance the country’s budget.  Deep cuts increasingly went into muscle and then bone and proved to be more than the social contract could bear. 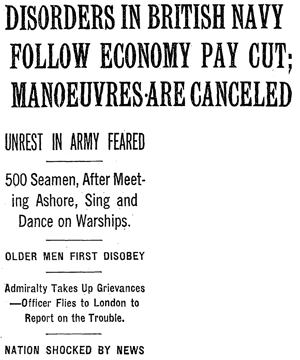 The fateful budget pushed through yet another round of cuts that reduced the pay of the lowest grade of sailor by 25%.  It proved to be the last straw and lead to the first mutiny in the Royal Navy in more than a hundred years. Sailors at anchor in the Port of Invergordon refused to sail out on their ships for planned exercises. The admiralty feared it marked the beginning of a Communist Revolution (only a few years after the successful revolution in Russia) and drew up contingency plans to bomb its own ships at anchor. Newspapers globally got wind of the mutiny and widely publicized the drama.

Fears of political instability in the UK kicked off a run on its gold reserves as investors rushed to withdraw gold from UK banks.  Investors and depositors feared that political pressures were now too high for the UK to sustain its overvalued currency. The populace feared these pressures might lead to a devaluation of the Pound. They were right. On Saturday September 20, 1931 (on the weekend, when all the biggest financial policies are announced) the UK went off the gold standard and devalued the Pound. 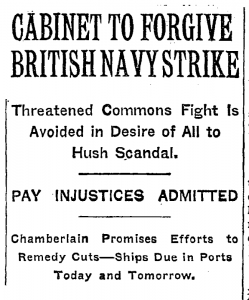 Over the next few years, currency devaluations would ricochet from country to country as politics and markets forced a new policy of debt relief.  When the dust finally settled, most currency relationships were much as they were before the first round of devaluations, only all currencies had a much lower value in gold terms.  Contrary to consensus opinion of the day, the bonds of the strongest sovereigns traded up, though with some near term volatility.

Our study of history suggests that a strong political rejection of austerity can be followed by currency devaluation.  Is last week’s election in the Eurozone such an inflection point?  Only time will tell.  However, a Euro devaluation would mark an important change in the markets that could impact many different asset prices.  As always, we look to the lessons of history to help us remain vigilant for small trends that may evolve into something bigger and to identify tail risks that are still early in their development.•