The US Federal Reserve’s Quantitative Easing (QE) program of bond buying has been one of its most controversial policies in recent years. In this week’s Trends and Tail Risks, we examine QE by studying its impact upon the yield of 30-year U.S. government bonds. The results show that the market priced new developments in a manner that was totally opposite from how the program was supposed to work. The pricing paradox has important implications for how the bond market may trade in what the Fed promises are the waning months of its QE program. 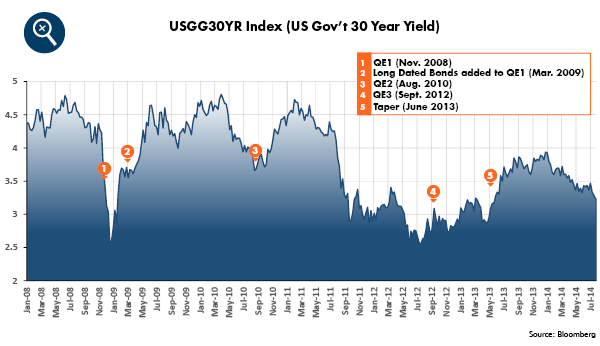 The five points above illustrate important dates in the Fed’s QE program.  The first four dates were important points that each marked an expansion of the bond buying program. These took place:

Each instance marked an enlargement of the program or its extension into new bonds.

The first announcement (QE1) was in November 2008 when the Fed announced it would buy $100b per month of mortgage backed bonds, whose value was plummeting in the forced liquidation caused by the Fed’s decision to let Lehman Brothers collapse. Falling prices for these bonds threatened the solvency of the leveraged US commercial and investment banks who owned them. The presence of such a huge buyer definitely helped to stabilize these asset values with the Fed acting as a large and willing buyer. As bond prices rose, yields fell, which lowered the cost of mortgages and incented new mortgage loans. This was probably the last of the QE programs that worked as it was advertised.

This strange paradox first appeared when the Fed, disappointed with slowing growth, extended its bond buying in early 2009 to include $300b of longer duration US government treasury bonds.  The Fed justified further easing with the worthy goal of wanting to lower long term interest rates and ‘stimulate’ the general economy.  The end result?  Yields on 30 year duration US government bonds rose very quickly from 3.6% to 4.75%, handing holders of these bonds a large capital loss.  Yet the Fed was aggressively buying these bonds!  How could their price fall?  What was really going on?

This pattern would repeat again in August of 2010 and again in September 2012.  Each time the Fed expanded QE, bond prices fell and bond yields rose.  The stock market did go up each time which was the real goal of the Fed anyway, leaving almost no one to ponder this paradox in the bond market.  Yet the actual outcome in the bond market was completely at odds with what the Fed had expected to see and how they had sold QE to the American public.  When the Fed started to discuss the possibility that it might ‘taper’ its bond buying program in mid-2013 (point 5), yields shot up as bond prices fell.  Many commentators expected bonds to crash in 2014 because these observers believed that these bonds would fall in price (rise in yield) without the Fed constantly buying them. These observers were shocked when yields resumed their secular downtrend that started back in 1981 and turned lower again even as Fed bond buying got smaller and smaller.  Year to date, 30 year U.S. government bonds have outperformed equities and clocked their best year since 1987.  How to make sense of this?

We believe that the simplest answer behind this paradox is that the Fed’s QE program works far differently from how it was designed.  As evidenced by the direction of bond prices, the market interprets QE as strongly pro-growth, as a sign that the Fed is willing to punish those who try to invest in safe assets of the strongest credits.  QE is essentially the Fed’s war on safety, its gamble to kick start growth.  How else can we explain the fact that the market's first reaction to the Fed’s bond purchasing makes the prices of the safest bonds fall - even when the Fed is buying those bonds?  Safe is clearly no longer an absolute term. We believe that the secular bull market in U.S. long dated bonds, that began in 1981, is still very much alive as long as over-indebtness weighs upon our economy.

The realities of our over-indebted world have forced the Fed to throw away the old playbook.  Clearly we live in a complex and challenging age of increasing government intervention in markets, where intervention will, sadly, be increasingly required to prop up growth and support the credit markets to prevent an even worse outcome. Despite this challenging backdrop, investors who have a deeper understanding of the fundamentals will outperform in any market environment.•