The Most Important Question in Investing Right Now

Last week we explored commodity prices to illustrate simply how supply and demand interact with prices to drive real responses in the economy.  Prices make things happen!  There is a deeper truth, however, behind all commodity prices, a secular driver more powerful than just supply and demand.   This week’s Trends and Tail Risks examines the crude oil market to identify the single most important question in the investing world right now.

PRICE OF CRUDE OIL - IN DOLLARS

Below is a chart with which many market participants will be familiar: the price of crude oil in the United States.  Crude oil prices rose dramatically during the last decade to peak at more than $140/barrel in 2008.  This was quite a shock to oil market observers in that crude had averaged $22/barrel from 1983 to 2003.  Most oil analysts would say China’s rapid industrialization drove prices higher. Is that really what happened?

PRICE OF CRUDE OIL - IN GOLD

Below is a chart of the same grade of crude oil (WTI), only this time it’s priced in gold terms rather than in US dollar terms.  To gold, a barrel of crude costs the same as in the 1950s, when crude was $2/barrel!  This means that crude would cost $2/barrel - if the dollar was still linked to gold at a fixed price of $35/oz. 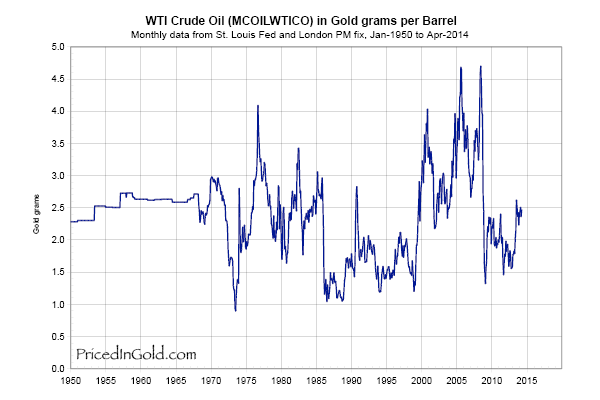 So one of the best indicators, and forecasters, of crude oil prices is…..gold!  Crude oil is only one of many commodities we could use to illustrate this point: the price of gold matters to all commodities because gold reflects changing currency values.  Currency values over the long run drive the marginal cost of production, which as we discussed last week, drives the equilibrium price of all commodities when priced in those currencies.  The spiraling crude prices of the 1970s were NOT caused by what the headlines screamed, such as oil embargos and gasoline lines, but rather by falling currency values (rising gold prices) resulting from Nixon’s abandonment of the dollar’s peg to a fixed price of gold.

Gold remains constantly in our thoughts and in our research because gold is such an important leading indicator and driver of all commodities.  For instance, our hypothesis as we watched the gold market rally from 2001 to 2003 was that higher commodity prices were on the way.  Commodities subsequently enjoyed their strongest bull market in a generation.  During the recent gold correction from over $1900/oz. to under $1200/oz., most commodities suffered. The equities of many commodity producers fell 90% or more. Emerging markets underperformed dramatically.  This came as no surprise to those who understand the meaning of falling gold prices.  But is the gold correction finally over?  Could these trends reverse?  It’s no exaggeration to say that this is the single most important question in the investing world today.

A potential resumption in gold's bull market is deeply appealing to the contrarian in us. According to consensus thinking, China has gone from an unstoppable powerhouse to yet another example of a feeble and obviously failing credit bubble.  But what if we are right that the rising gold price, as opposed to an ascendant China, is the true driver? Would it not shock consensus thinking if gold could continue its recent strength and lead commodity prices higher in the face of such obvious weakness in China? Our experience is that the market often chooses the path that surprises the greatest number of people. Certainly now we are seeing some of the best values we have seen in the commodity sector in more than a decade. We are now, after years of caution towards the commodity sector, combing the investment world for undervalued, low-cost commodity producers.  We are finding a growing number of compellingly valued opportunities that we will discuss in future articles.•