The Power -And Illusiveness-of Long-Term Compounding

The Power - and Illusiveness - of Long Term Compounding

One of the questions that almost no one has asked is this: what would that $24 be worth today? A simple spreadsheet calculation below shows that $24 compounded at an 8% return per year yields a staggering $223 trillion today!  This number is not only far greater than the value of all Manhattan real estate but is larger than the value of all the financial assets on the planet today – and all this potential wealth from a humble $24 back in 1626. Eight percent after all does not seem to be a herculean assumption. Why isn’t the world richer by far since clearly small amounts over time can compound so prodigiously? What happened to all that potential wealth? Are there lessons we can learn from the Lenapes, who seemingly once held untold future riches in their hands? 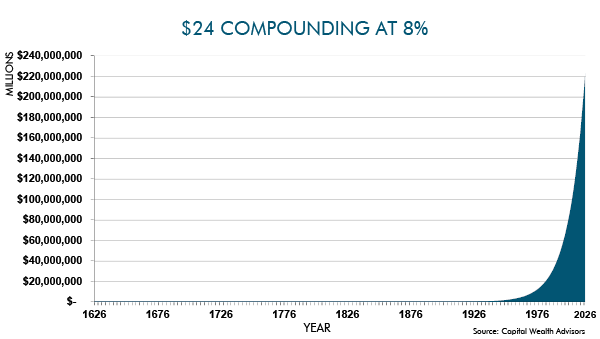 The Lenapes themselves would face many challenges that would have been impossible to foresee, such as a smallpox epidemic in the 1640s, a disease that had never been encountered before in the New World. Many Lenapes allied with the English to fight against the Americans during the American Revolutionary War, which was a time of great devastation even for the victors when the US suffered its worst ever bout of inflation. Continued expansion of US settlements and the repeated failure of the US Government to honor its treaties with the Lenapes would push the Lenapes further across the country into ever dwindling reserves. All of this of course all took place on the same North American continent which witnessed some of the most explosive and sustained economic growth that the world has ever seen.

Winning by Not Losing

The importance of caution is the greatest lesson we draw from financial history. When I say caution I mean the unyielding imperative to anticipate and navigate successful periods of extreme capital destruction and unexpected catastrophe.

We, like most investors, have benefited from the recent all time highs that many equities in the US are enjoying and welcome these strong markets. Never have we lost our focus on avoiding the pitfalls that have claimed so much of the world’s potential wealth. This focus drives our constant monitoring of potential threats.  When we survey the world today we find a number of emerging tail risks to closely watch.  We can find rising financial nationalism in Hungary as the national legislature retroactively abrogates foreign currency denominated mortgages going back 10 years. Will the ripples from this legislation subside quickly or continue to threaten poorly capitalized banks across Europe? Might the unfolding decline of many Portuguese banks threaten to re-open a new chapter in the ongoing European banking and sovereign debt crisis? How will the Fed’s goal of unwinding its unprecedented Quantitative Easing impact the markets? Each day we face a new set of challenges in the market but we always remember the lessons of history, that investors’ long term returns can be dominated by the simple fact of winning by not losing.•