Gold: Lessons from the Depression 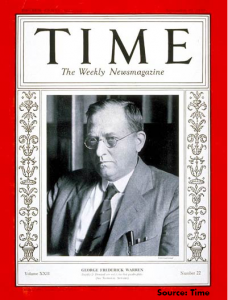 Last week’s Trends and Tail Risks noted that there is more money to be made being long the solution than there is in shorting the problem. We are convinced that over indebtedness is the world’s greatest financial problem. Weakening credit quality and a rising relative value of gold lie in our future. The solution, as we discuss below, is higher gold prices. This week we step back into the past to introduce largely unknown economist George Warren. His penetrating insight into credit and gold guided President Roosevelt, who through a higher price of gold helped to contain the Great Depression. We can apply Professor Warren’s insights to the markets today to understand why gold’s relative value should rise and how we as investors can profit from this trend.

Professor George Warren was a farm economist whose 1935 book Gold and Prices is one of the most impactful books we have ever read in our long study of gold and credit. Professor Warren had simple, but controversial, advice on how to stem the unrelenting tide of forced liquidation that was driving the economy into bankruptcy and crashing the stock market 90% from its 1929 high. His advice? Raise the U.S. dollar price of gold, to which the dollar had been pegged for decades at the price of $20.67 per ounce.

President Roosevelt followed Professor Warren’s counsel. The gold price would be raised in stops and starts over the next few months until it was finally pegged at $35/ounce on February 1, 1935. This higher gold price represented a 69% devaluation of the US dollar versus the gold price. Make no mistake: this was a controversial wealth transfer from creditors to debtors in the form of debt forgiveness. Acting US Treasury Secretary Dean Acheson resigned in protest in November of 1933, prompting a TIME magazine cover story of Professor Warren (picture above). Future economists, such as our own former Federal Reserve Chairman Ben Bernanke, would look back on the Great Depression and reach the conclusion that those countries who first left the gold standard (devalued their currencies) enjoyed the fastest recoveries.

Professor Warren studied the history of prices to see what others had missed. He knew that gold, to which the US dollar was linked at a fixed price under the Gold Standard, was not perfectly stable in relative value. Gold’s relative value, what Roy Jastram would define as ‘the purchasing power of gold,’ fell during booms as asset prices appreciated, but rose during busts and periods of credit stress when other asset prices fell. The US had enjoyed an unprecedented boom during WWI as we armed and fed the world. The Roaring Twenties built further upon this shaky foundation of rising debt. This was the biggest boom the U.S. had seen. In fact, the relative value of gold fell to its lowest since data began in 1560! The stock market and commodities rejoiced. The vast majority of borrowers indebted themselves during this boom at the worst possible time, at the nadir of gold’s relative value when credit flowed freely. Then the Great Depression struck.

During the Great Depression, Credit spreads hit levels of distress twice as bad as those we experienced in 2008. Gold’s relative value rallied from an all-time low to an all-time high as asset values and incomes collapsed. Debtors were trapped. Debtors had literally borrowed gold, shorting it and promising to pay it back at a future day. Gold enjoyed an enormous windfall as credit stress rose. Wheat prices fell 83% from the trough of gold’s relative value in 1919 to its peak in 1932. The same ounce of gold could now buy more than five times as much wheat! Gold owners were thrilled. Indebted wheat farmers went bankrupt.

Wheat peaked in 1919 at the average price of $2.16 per bushel. One ounce of gold bought 9.6 bushels of wheat. By 1932 wheat prices had fallen 83% to $.38 per bushel. The same ounce of gold now bought 54.4 bushel of wheat, almost six times more! Gold investors were thrilled. There was a problem however. Wheat farmers were bankrupt. The debts they had borrowed were in gold, since the dollar was pegged to a fixed price of gold. Farmers unlucky enough to borrow in 1919 faced an impossible task. They had to grow six times as much wheat to service their debts! Warren’s insight was that the collapse in asset prices and incomes had biased the relative price structure heavily against debtors. Warren knew that a higher gold price, a dollar devaluation, was the solution to their credit problems because it would send prices such as wheat higher. Both gold prices and commodity prices rose 69% during Warren's revaluation.

Warren’s insight was that the relative price structure had swung strongly against debtors, who were insolvent unless their assets and income rose relative to their debts. Higher gold prices were the solution to their credit problems.

Credit is gold’s least understood driver. The market anticipates credit stress and bids up the relative value of gold, just as it has since 1560. The bigger the credit stress, the bigger the rise in gold’s relative value. The same amount of gold buys more – more wheat, more houses, and more equities. Modern day authorities react much as President Roosevelt did to clear evidence of credit stress. They raise the price of gold in the hope of boosting asset values to lower gold’s relative value, to lower credit stress. The world’s debts are higher now than they were in 2008. Yet gold’s relative value has fallen. So has its price. Can gold stay down for long when our credit problems remain unresolved? We think the answer is “No!” In next week’s Trends and Tail risks, we examine the case for the gold royalty stocks as our preferred trade structure to get long the solution to profit from these trends.•