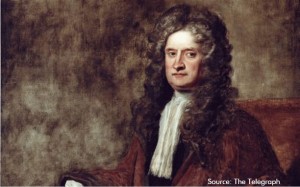 "I can calculate the movement of stars but not the madness of men."

Sir Isaac Newton’s genius was staggering. In the early 1700s, he created the scientific method by which all science proceeds through hypothesis testing and data collection. This innovation alone did more to advance western civilization than any other single thinker. But he didn’t stop there. Newton invented calculus and was most famous for his laws of Newtonian physics which dominated scientific thinking for nearly 200 years about force, motion and mass. Newton was also a lousy investor. In this week’s Trends and Tail Risks we outline what he got wrong and what we can learn from it.

Sadly – for him – Newton fell victim to the psychology of a powerfully rising, yet overvalued market. Newton initially bought into the South Sea company in 1719 before the stock would begin its meteoric, and fateful, rise and exited with a handsome profit. Not content with his seemingly paltry profits as the market rose day after day, Newton famously – and horribly –  reentered the market only to lose nearly his entire fortune. This painful reversal led to his famous quote above. 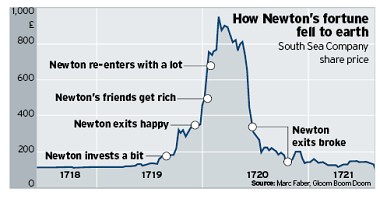 What lessons can we learn from Sir Isaac Newton?  First that paying close attention to valuation is critical to successful investing. Second that when valuations become high, thoughtful investors find ways to hedge their downside risk while still retaining targeted exposure to the markets.

Below are two of the best long run valuation metrics for US equities: Tobin’s Q ratio or replacement cost and CAPE or the cyclically adjusted price to earnings or PE ratio. Replacement cost represents the cost to replace an underlying set of assets (Replacement Cost Valuation, June 11, 2014) and is our single favorite valuation metric. The CAPE ratio is a metric pioneered by Robert Schiller, the winner of the 2013 Nobel Prize in Economic Sciences. The CAPE ratio includes average earnings over the last 10 years to calculate PE ratios. 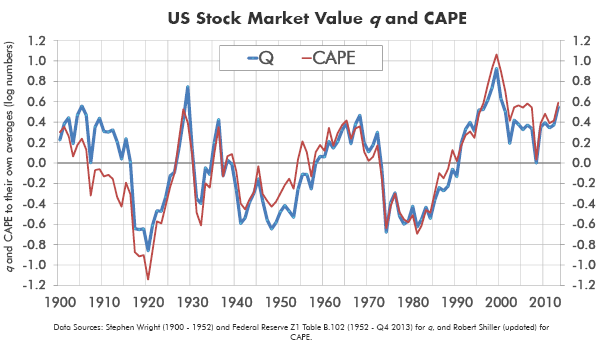 Now this is both good and bad news. The good news of course is that investors have been rewarded as the US markets have been strong and priced themselves at the upper end of historic valuations. The bad news is that from these lofty levels, investors are unlikely to earn similarly handsome returns. The only thing that we as investors can control is our entry price into an investment. So we must pay special attention to the price at which we buy. As the saying goes in the retail apparel business ‘If you buy it right, it’s half sold!’

We prefer to buy our investments ‘right’ with a margin of safety. The stronger the markets are, the fewer compelling investments we find to put new money to work. Could investors earn attractive returns from here? Of course they can.  The market’s sustained run in the late 1990s lasted for a full 4-5 years after first registering a warning sign that valuations were too high. That’s a very long time – far too long realistically for investors to completely sit out a rising market.  Yet few would forget the 50% decline that followed the Tech Boom, and the more than 90% drop in the highest of flyers.  Is there a middle ground?  We believe that there is. Thoughtful investors may choose to increasingly hedge their portfolios to limit their downside even while retaining exposure to a strong market.  We think that is an insight with which even Sir Isaac Newton might agree.•