“The basic need of the creator is independence. The reasoning mind cannot work under any form of compulsion. It cannot be curbed, sacrificed or subordinated to any consideration whatsoever. It demands total independence in function and in motive.”

When it came to American painting, the 20th century belonged to Georgia O’Keeffe.  Among the many accolades she won are the Presidential Medal of Freedom - our nation’s highest civilian honor, and the National Medal of Arts.  Few artists have achieved her fame and reach during their own lifetimes.  Her honors from academia and from the nation at large are equaled only by her success at the auction house.  In November, her work “Jimson Weed/White Flower No. 1” (shown below) sold for $44 million dollars.  What makes a single Georgia O’Keeffe painting - of a simple weed - worth $44 million?  The answer is her deep originality, which reflects her own ruggedly American personality. 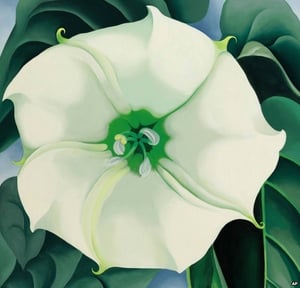 Over the seven decade span of her career, she remained consistently independent despite the stifling influence of overseas artists who had set the tone of American art for so many years.  Her work defined the clean break of American painting from the shackles of outside influence that had for so long dominated the American artistic spirit.  This is why her work is so powerful – and so valuable.  When we study Georgia O’Keeffe’s uniquely American work, we might also reasonably inquire about the sustainability of the uniquely American stock market outperformance as compared to rest of world.  Will it endure?  Can it, like the imagination of Georgia O’Keefe, boldly chart its own course to success?  In this week’s “Trends and Tail Risks” we examine the art of Georgia O’Keeffe in order to inform our view of the sustainability of the uniquely American stock market rally underway.

Ms. O’Keeffe’s life is a study of perseverance: the triumph of will over adversity – not the absence of adversity.  At age ten she decided to become an artist.  Ten years later she turned away from her art in frustration in order to pay the bills in the commercial world.  Four long years would pass before she would once again take up her paintbrush.  Her insatiable inner drive and curiosity would lead her to many schools; sometimes learning, sometimes teaching, but always searching for her own unique artistic voice.  The photo above affords us a glimpse of the hard driving, uncompromising loner who was Georgia O’Keeffe.

Her highs were amazing.  As the stock market soared in the Roaring ‘20s, Joseph Stieglitz, first her patron and then her husband, negotiated the sale of her “calla lily” work in April of 1928 for the largest amount ever paid to a living American artist.  Her vibrantly original work had driven her so very far, so very fast.  But her success was not without a heavy personal toll. 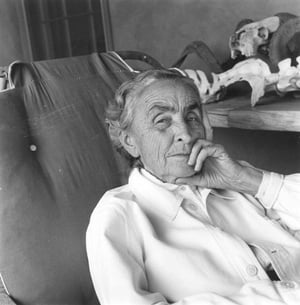 Her lows were equally noteworthy.  In October of 1932 she buckled under the weight of a nervous breakdown.  It drove her into the hospital in 1933, hitting her lows almost in lock step with the very depths of the stock market during the Great Depression.  Unlike the market, it took her a further year to rally from the depths of her own depression.  Had her career flamed out at such a young age?  It was a fair question.  She would not pick up a paintbrush for the next year.

But somehow, miraculously, the Georgia O’Keeffe that emerged was stronger, wiser; different somehow than the O’Keeffe who broke under the same weight.  In the following years she would chart her own course, leaving New York City behind for her beloved American Southwest.  She would never look back.  For seven decades she would be the most uniquely American painter.   What lessons might her life hold for investors today?  Will the ongoing rally in the US stock market endure despite spreading weakness in many parts of the world?  Can our market chart its own independent course?

Below is a chart that shows two things: (1.) the relative performance of the S&P 500 versus the MSCI World Index (excluding the U.S.) and (2.) the J.P. Morgan EMBI Index of bond spreads.  We believe it shows that rising credit stress outside of the U.S. is behind the widening performance gap between the U.S. market and the rest of the world.  The J.P. Morgan EMBI Index tracks the premium over U.S. interest rates that investors demand when investing in dollar-denominated emerging market bonds of comparable maturities.  A rising EMBI Index is indicative of rising credit stress and falling bond prices in emerging markets.  Emerging markets indebted themselves too heavily during their long boom from 2002 until 2011.  These countries borrowed $5.7 trillion (that’s trillion with a T) in U.S. dollar denominated debt.

U.S. Federal Reserve tightening, and the stronger dollar this is causing, is threatening the ability of emerging market borrowers to repay this debt.  These fears are driving down the price of this debt and leading local market investors into safe havens such as the U.S.  The stronger the dollar, the more precarious these debts become.  Credit and foreign exchange crises are blossoming around the world in a bitter harvest that will be reaped by those who “reached for yield” and lent their money to these riskier borrowers. 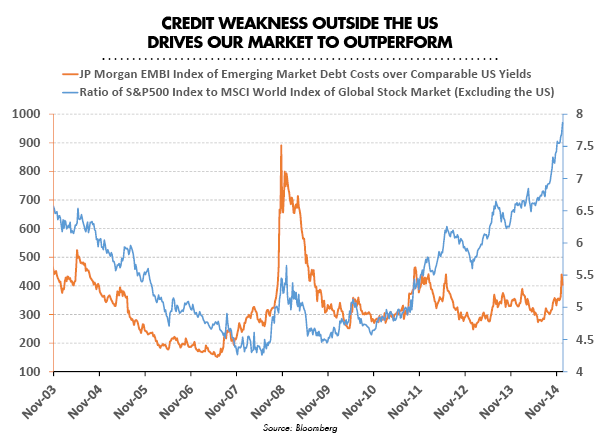 It’s only logical that global investors would move their capital to the relatively safer shores of the U.S. in times of rising credit stress and currency turmoil in the rest of the world.  Remember that equities are the junior tranche in a company’s capital structure, while bonds represent the senior (less risky) tranche.  Therefore, bond troubles almost always cause equity market troubles.  Such weakness is unfolding in many emerging markets.  The devastating weakness in many commodity markets, especially crude oil, only intensifies the fundamental downtrend in many of these markets.  After all, this has been our concern since May of 2013.  Even now we continue to believe that these trends may prove to be far more enduring than most realize.

We began to position portfolios away from this risk in May of 2013 when we took the unusual step of eliminating all emerging market exposure. Our belief is that it’s always better to be safe than sorry!  We took further steps across our portfolios when our concerns about credit deepened again this May (Big Problems Start Small, 5/21/14) and again in August (Is Credit Quality Peaking, 8/6/14).

Our emphasis has always been and will always be on safety.  We cannot grow our investments without taking risks – but not every risk is worth taking. Over the last eighteen months we have become progressively more selective about the investments with which we are comfortable.  Credit weakness overseas has, to date, enabled the unique outperformance of the American stock market rally to endure.

Our market, like Ms. O’Keeffe’s work, has remained likewise stronger, wiser; different – outperforming our many competing markets around the globe and making a name for itself with its independence.  The day will come, however, when the growing weight of credit weakness, and the strength that it will impart to the rallying dollar, will prove to be too much even for our own uniquely American rally to endure.  We will be watchful, as always, for the signs that will suggest that time is upon us.  Our trusted indicators in credit and other sensitive markets have proven their insight over many cycles.  It is our foremost goal to stay ahead of problems before they make their way into the headlines and therefore into the prices in the market.  This is a daunting task, to be sure, but we may find inspiration from studying the life and works of Georgia O’Keeffe, the creator of a uniquely American style.•

2. Georgia O'Keeffe on the portal at the Ghost Ranch, 1963, Toddwebbphotographs.com