The dreaded polar vortex is back in the news again this week.  Temperatures are plummeting across the nation – with, of course, the welcome exception of our own sunny Naples.  Understandably our neighbors to the North are not looking forward to more ice, snow and freezing temperatures.  The resurgent cold reminds me of a time long ago, back in the late 1800s, when the North and South Poles were the focus of great popular fascination – but not for their weather.  A “race for the poles” consumed the leading nations of the day – very similarly to the 1960s “space race.”  Each nation’s explorers were determined to win honor for themselves and for their country to be the first to reach the poles, one of the planet’s last unexplored and most desolate regions.  Success made national heroes out of explorers in what was the golden age of polar exploration. 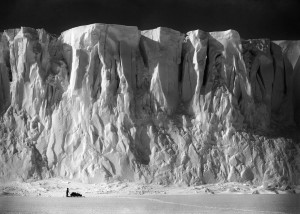 This is understandable when you consider the vastness of the challenge.  The South Pole sits 9,000 feet above sea level, much colder than the North Pole, thanks to 9,000 feet of ice.  Temperatures at the South Pole have been recorded as low as 117 degrees below zero, not counting wind-chill!  So much for the rigors of our own polar vortex.  Explorers would be exposed to such temperatures for more than three months on a continent twice the size of Australia covering thousands of miles on dogsleds, skis or even on foot.  Successful missions took years of fund-raising, planning, and execution.  Success was never assured against the unforgiving wasteland of the Antarctic (shown above), which punished mistakes severely.

Our job as investors is to shepherd capital safely through the markets.  This is surely somewhat less than heroic.  Thankfully, neither does it involve prolonged exposure to cold temperatures as I have sworn those off for good.  But a successful conclusion in investing is never an accident.  Rather it always comes only after many long years of study and preparation, flawless planning, disciplined effort, and sound execution.  In this week’s Trends and Tail Risks we contrast the efforts of two rival Antarctic explorers whose race to the South Pole teaches us the importance of successful planning and execution. 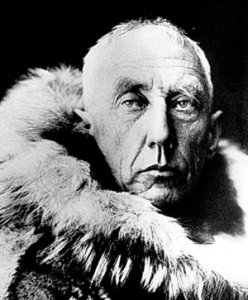 The famous race to the South Pole between England’s Robert Falcon Scott and Norway’s Roald Amundsen (both shown right) is an excellent case study.  Robert Falcon Scott’s first and unsuccessful quest for the South Pole was aboard the ship Discovery.  Very few of his crew had polar experience.  His expedition suffered many setbacks.  After failing to reach the pole, Scott’s mission needed two rescue ships to free the Discovery from the ice to return home.  Nonetheless, for his valiant effort he was hailed as a returning hero and promoted to Captain (he was a naval officer).  The King honored Scott making him a Commander of the Royal Victorian Order.  For the next year Scott reveled in his newfound status.  He traveled widely, lectured to an adoring audience, and wrote his memoirs.  But the South Pole was never far from his mind. 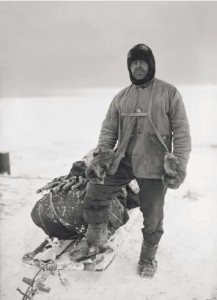 While Scott was being feted by English high society, Roald Amundsen was successfully discovering Canada’s fabled “Northwest Passage” from the Atlantic to the Pacific (1903-1906).  For three years Amundsen lived with Artic tribes of Inuit peoples, studying how they could survive and even thrive in such extreme temperatures.   Amundsen was, by then, already an experienced polar explorer.  He had earlier served as first mate aboard a failed Antarctic expedition from 1897 to 1899. The ship was trapped in seven feet of ice for thirteen months.  When the commander took ill, Amundsen stepped in and helped shepherd the ship and its crew to safety.   Amundsen was a very experienced polar explorer.  He had seen, first-hand, how badly things could go wrong in the brutish cold of the South Pole.  All these lessons he dwelt upon when he planned his own mission to the South Pole.

Below Scott’s ship Terra Nova is shown viewed from an ice grotto. 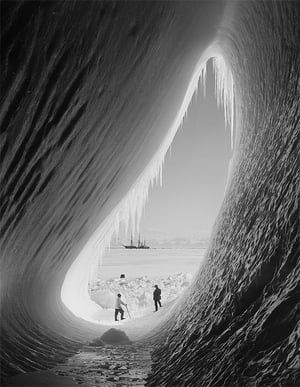 Amundsen believed in constant learning and thorough preparation.  He applied the lessons of his experience living in the Artic with the Inuit and adopted their simple but highly effective clothing and equipment.  Once Amundsen arrived in Antarctica, it took months to prepare depot camps of re-supply to the Pole and back before the long months of Antarctic winter fell, whose dark and cold made it impossible to travel.  During the winter Amundsen fine-tuned his equipment, even going so far as to shave the wood of their dog sleds down to reduce their weight and extend their range.

Scott ignored the counsel of experienced explorer Fridtjof Nansen.  Instead, Scott put his faith in the modern (but unproven) technology of motorized sleds, whose motors would fail in the extreme cold of the South Pole.  Scott also relied upon ponies as pack animals.  They were unsuited to the bone-crushing cold of the Antarctic and proved very disappointing.  His team was unable to fully provision the necessary supply depots along the way.  Bravery and courage still drove Scott forward successfully to reach the Pole - only to discover to his horror that Amundsen had beat him to it.  As mistake after mistake piled up, they claimed a terrible toll.  Scott would die a mere eleven miles from his camp as the cumulative weight of these errors took his life and those of the other four men on his team.  His journals would be discovered with his body.  It is clear from them that he knew the end was near:

“We took risks, we knew we took them; things have come out against us, and therefore we have no cause for complaint, but bow to the will of Providence, determined still to do our best to the last ... Had we lived, I should have had a tale to tell of the hardihood, endurance, and courage of my companions which would have stirred the heart of every Englishman. These rough notes and our dead bodies must tell the tale, but surely, surely, a great rich country like ours will see that those who are dependent on us are properly provided for.”

All of Amundsen’s men returned to Norway safely.  Amundsen focused not on Providence but rather on preparation and execution:

“I may say that this is the greatest factor—the way in which the expedition is equipped—the way in which every difficulty is foreseen, and precautions taken for meeting or avoiding it. Victory awaits him who has everything in order—luck, people call it. Defeat is certain for him who has neglected to take the necessary precautions in time; this is called bad luck.”

-The South Pole, by Roald Amundsen

The markets have shown me many things in the nearly two decades during which I have been a professional investor.  Nothing has impressed me more than to see the humbling extent of its extremes: the amazing heights to which investments can go when everything breaks their way, and the incredible depths they can plumb when the fundamentals reverse.  These polar explorers, at the very ends of the Earth, experienced that first hand.  We see the same thing every day in the markets.  Many of these trends are working now in our favor to set up amazing long term buying opportunities.  Others are frustrating us right now as they postpone the successful harvesting of existing investments.

So far our chief frustration is that we have been early with our investments in the gold royalty sector, in companies such as Franco Nevada (FNV).  Our view, once controversial but becoming less so, is that gold is actually more driven by credit than by inflation.  As credit risks rise globally – and the odds of default rise, we expect gold to respond by rising as well because gold has no counter-party risk.  We have cited numerous examples of rising credit risks, from emerging markets, to Greece, to our own high yield debt market here in the U.S. (Market Raids and Weak Links, 10/22/14, Forbidden Fruit, 12/10/14). With credit quality deteriorating the stage is set for gold to work.  In anticipating this outcome, we have been early in our investments.  Are we we still too early?  Time will tell.  Our experience over time has proven, however, that it’s better to be too early than too late.

Gold is also an important leading indicator for future commodity prices.  A higher gold price would be welcome news indeed for a beaten down sector such as energy, which is getting crushed as crude oil prices collapse.   Many commodity producing companies made bad decisions with debt during their boom times.  After all, interest rates were so low, it was almost “free money.”  When commodity prices fell the weight of that debt changed everything.  Some will die at the hand of their debts.  Other will live to fight another day, chastened from the down-cycle and beaten down severely in price.  It is these equities which interest us.

We as investors, with thoughtful preparation and execution, can find opportunity in the depths of their current misfortune.  In the disarray and confusion that follows such a reversal of fortune we are searching for beaten down survivors who we can safely own for the long term.  Bought carefully and held patiently, such investments can provide excellent long term returns.  Over the next few months expect to see the stocks of the survivors, low cost producers with limited debts, slowly start to appear in portfolios.   But it is in gold that a revival of their fortunes will begin, and there is no better way to profit from gold than the gold royalty equities.

We are committed to the principle of constant learning and constant improvement.  This commitment drives the research that we communicate through these letters, allowing our clients to understand the developments we are watching and why we think they are important.  Our experience has taught us the wisdom of Roald Amundsen: luck favors the prepared.•