This week I read Ghost Boy, the autobiography of a young man, Martin Pistorius, who contracted a rare disease that left him unable to move or communicate for nine years.  Trapped in his own mind he had nothing to do but observe those around him – and listen.  His story of courage despite seemingly insurmountable odds is not only inspiring but also sheds light on how we as investors can more profitably navigate the markets.  The markets always have a message for us.  But are we listening?  In this week’s “Trends and Tail Risks” we examine the amazing story of Martin Pistorius for what it can teach us about the importance of listening. 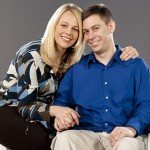 Martin Pistorius was a regular kid in South Africa who caught a rare and undiagnosed disease that slowly shut down his body and then his mind.  Round after round of fruitless trips to countless specialists eventually resulted in this unbelievably harsh verdict to Martin’s terrified parents: Martin was diagnosed with irreparable brain damage and would be a vegetable barely able to swallow instinctively for the rest of his life.  For nine full years his parents cared for him, every hour of every day, as the hope of any further communication with Martin seemed to slip beyond their reach forever.  The unrelenting pressure and hopelessness drove his mother to attempt to commit suicide.  The despair of their situation drove raging arguments between his parents over his care.  Through it all, however, his parents were always there for him, meeting all his needs. There may be no finer example of the love of a parent than their tale of devotion despite heart-rending disappointment and stress, even when all hope seemed lost. For years Martin neither sensed nor thought anything; he was in a vegetative state.

Slowly, out of the fog, Martin began to regain consciousness and became aware of his surroundings – only to discover to his horror that no one understood he was sentient again.  His terror mounted as he realized he faced the rest of his life as a prisoner condemned within the confines of his own incommunicative body.

Martin realized that he was a “ghost boy” unseen by those around him.  I cannot imagine the despair which wracked him at this tortuous fate.  Six long years would drag by as Martin regained consciousness, a development that was completely unnoticed by those around him both at home and in a day-care service for people like Martin.  One day, one of Martin’s care-givers discerned a spark that Martin was increasingly more conscious of his surroundings.  So began Martin’s long struggle to regain so much of his life that he had lost.  As Martin learned to communicate with the assistance of a computer that spoke for him, such as Stephen Hawking uses, he wondered at the world that was opening up to him.

In a book full of profound insights, there were two powerful conclusions Martin had that spoke to me: 1.) the difficulty of making decisions, which he never had to do before and 2.) the frustration he experienced in finally being able to communicate – but not being listened to!   Martin’s life story goes on to reach profound heights as he begins to give back to the community as a volunteer, gets a job, and eventually marries and moves away from home.  I wholeheartedly recommend this book as a very inspirational story.  At the heart of Martin’s story is the importance of listening which is a lesson we could all heed to our benefit.

Investment implications: the importance of listening

One of the most important ways that the market communicates is through price.  Price is the tool that the market uses to balance supply with demand (Prices Allocate Resources, 6/25/14).  When prices change, incentives change – and the world is driven by incentives.  We would be wise to monitor these changing incentives for ways in which we might profit from them in our investing.

One noteworthy change in prices has been the recent collapse of the crude oil market.  As prices fell more than 50%, the market was sending a strongly worded signal that supply was in excess of demand and needed to be curtailed.  So the incentive to crude oil producers to maintain and grow production collapsed with crude oil prices.  Now excess supply is starting to fall.  This sudden reversal of fortune stunned many investors and left them nursing losses.  However, there was also another message embedded into these rapid changes in the crude oil market - a message of profit – for those willing to listen.  For a small subset of the market, a brighter day had dawned, not because prices fell but because the shape of the futures pricing curve flipped from backwardation to contango, as we explain below in greater depth. 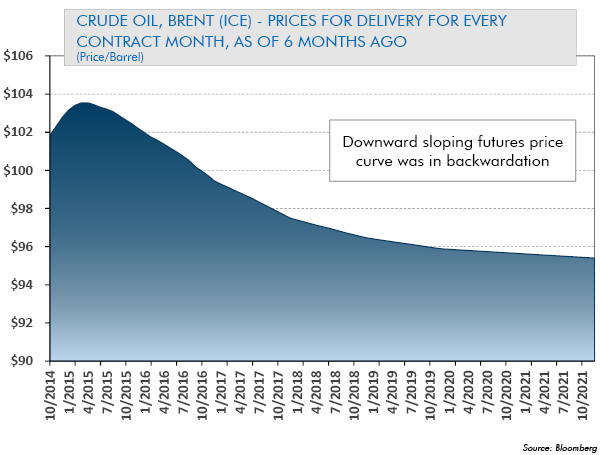 Six months ago the April 2015 price of Brent crude oil, the international benchmark price, was $103.54 per barrel while the price of crude one year later, in April of 2016, was trading at a discount at $101.38 per barrel.  The market at that time was willing to pay a premium for crude oil delivered sooner rather than later, which is a pricing structure known as backwardation.  Now the situation is reversed.  The market is willing to pay $60.37 per barrel for crude oil now, April 2015, but offers a premium price for crude oil delivered one year from now of $68.25 per barrel.  This pricing structure where prices for future delivery are greater than current prices is known as contango.  The global crude oil market has been in backwardation the vast majority of the time over the last ten years or so, which means there has been almost no incentive to store crude oil – until now.

How the Contango Trade Works

Market participants may take delivery of crude oil now at the prevailing price of $60.37 per barrel, put it into storage for future delivery, and lock in the price today of that future delivery for April 2016 by selling crude oil futures at $68.25 per barrel.  This yields a premium of $7.88/barrel over prices for current delivery for those willing and able to store crude oil today and deliver it in one year's time.  Market participants have a strong incentive to store crude oil for future delivery at higher prices as long as the cost to store crude oil is lower than the premium of the future price over the current price.  This change in the price structure, from backwardation to contango, is providing a new source of demand for the limited supply of crude oil storage.  Rising demand for this storage space relative to a fixed supply of storage tanks should result in improving economics for companies who own and can rent out their crude oil storage capacity. 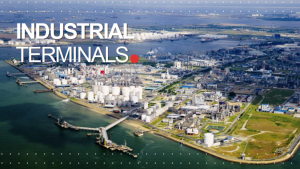 Fundamentals are improving rapidly for the small handful of publicly traded companies that specialize in storing and moving around the world crude oil and refined products made from crude oil.  One such company is Royal Vopak, a company based in the Netherlands with storage operations that span the globe.

Royal Vopak (VPK NA) has a market capitalization of $6.7 billion and traces its roots back to the Dutch East Indies Company in 1616.  Vopak is the world’s largest owner and operator of storage tank farms controlling 11% global market share in oil and refined products storage units and associated infrastructure, with operations in Europe, Asia, the Middle East, the United States and many emerging markets.  Vopak makes money by charging customers for the right to store their crude oil and other refined products in the tanks located at Vopak’s many strategically located assets around the world.  Vopak also sometimes operates more extensive infrastructure such as pipelines and shipping berths for ocean-going ships integrated with its storage operations.

Adding Value the Old Fashioned Way: Investing Patiently Through the Down Cycle

Vopak has expanded capacity per share by 44% since the last peak even while returning 25-40% of its free cash flow to shareholders in dividends (now yielding 1.9%).  Growth in capacity per share means that Vopak’s earnings in a stronger environment, such as prevailed at the 2007 peak of the cycle, could more than double from here, which would value the shares at an undemanding 11.5x multiple on our estimates of peak earnings power per share.  We are strong believers in valuing our investments using multiple methodologies, including the replacement cost of the underlying assets (Replacement Cost Valuation, 6/11/14).  On this valuation metric Vopak trades at the replacement cost of its storage tanks alone.  This means that we get for free Vopak’s management, additional infrastructure, and the underlying strategic value of its unique locations at major hubs such as Houston, Rotterdam, Fujairah (United Arab Emirates), and Singapore.  Vopak’s rising margins despite falling capacity utilization are proof of the rising strategic value of its unique locations. Crude’s steepening slope of contango is now a new source of demand for Vopak’s limited storage capacity.  This means that we as investors have multiple ways to win in owning the shares of Vopak.

Profiting Despite Adversity: It’s Possible – If We Only Listen!

Our research into Vopak illustrates the importance of how we think about trade structure and of how we invest to win regardless of the market environment.  It has always been our experience that there is more money to be made participating in a solution rather than in betting against, or shorting, a problem.  Vopak is an excellent example of how we seek to do so, even when the “solution” in which we are investing is caused by hard times for large segments of the market, such as crude oil producers.  The key, of course, as Martin Pistorius lived firsthand, is to listen carefully to the message of the crude oil market, whose move from backwardation to contango has created a window of opportunity for us to fandango through this inflection point in the cycle. •

“If all my possessions were taken from me, with one exception, I would choose to keep the power of communication, for by it, I would soon regain all the rest.”
-Daniel Webster

“I like to listen.  I have learned a great deal from listening carefully.  Most people never listen.”
-Ernest Hemingway

“What is the point of communicating if no one listens?”
-Martin Pistorius

“A good listener is not only popular everywhere, but after a while he knows something.”
-Wilson Mizner