The Illusion of Attention

What do we know?  And how can we be sure that we really know what we think we know?  What is the possibility that unseen and therefore unrecognized errors cloud our decisions – especially in the forward-looking world of investing?  Of all the fields of decision making under uncertainty surely there is no field so fraught with error as the world of investing, where asset prices now are attempting to reflect fundamental developments in an unknown future!  I ponder these questions often, as anyone must do who is seriously dedicated to the thoughtful and careful stewardship of capital through today’s volatile markets.  In this week’s “Trends and Tail Risks,” I examine the strange quirks hidden in our perception and the risks they present to successful investing in today’s market.

In the course of my ongoing research I was fortunate to come upon a remarkable study in psychology and perception, performed by researchers at Harvard University.  The link to their short video test is below.  The video lasts just over a minute.  As you click on the link pay special attention while you take the “selective attention test.”  I think you will be surprised at what you learn.  More than twelve million people have taken this test.  Fully half of those who take it fail the test.  Follow the instructions carefully!

The Illusion of Attention

Fifty percent of those who take the test fail to see the unexpected presence of the gorilla.  For a full nine seconds the gorilla saunters across the stage from right to left, going largely un-noticed by half of all observers whose attention is dutifully focused upon the task at hand: counting the white team’s number of basketball passes.  Those who do not see the gorilla the first time are stunned that they missed it.  Observers who saw the gorilla cannot believe that anyone could have possibly missed it.  There is no statistical difference among those who see and those who do not see - in gender, IQ, or occupation.  What does this strange truth say about the quality of our own perception: do we really know what we think we know?  What are the limits of our own perception, even when we are focusing all of our powers of attention upon a task?

The only statistically relevant factor that determines who “sees” and those who do not is the level of experience we have as observers within the context of the observation.  For instance, experienced basketball players have higher odds of seeing the unexpected, and unusual, gorilla than do less experienced players.

This lesson’s relevance for us as investors speaks to the very heart of this publication, which is after all named “Trends and Tail Risks.”  A tail risk is by definition an unexpected event whose occurrence is thought to be rare but has dramatic consequences.  A tail risk is an unusual event - like a gorilla at a basketball game – that even attentive observers can miss as they focus all their limited powers of attention on the everyday, on that which is expected.  But if investors do not even perceive of these tail risks – such as those who are blind to the gorilla’s presence – how can they avoid, or better yet, profit from these tail risks?  The authors of this powerful study point to only one solution: the participant needs to identify and highlight these risks - to make them less hidden!

The market is always full of surprising developments.  Perhaps none has been so unexpected as last year’s precipitous collapse in long-term interest rates in the developed world.  Those who anticipated this fundamental development in the bond market profited handsomely as the price of their longer duration bonds appreciated dramatically in value – and all the while taking almost no credit risk!  Contrast this with the disappointing experience of those who “reached for yield” and suffered losses in the junk bond market.  For these investors, higher risk did not equal higher return.  Return with very limited risk is the goal we all seek in the financial markets.  Such returns are always difficult to come by.

Were falling yields a tail risk; an unexpected - and therefore unseen gorilla?  I think the answer is “no,” at least not for those who trouble themselves to study the history of the markets. After all, experience was the only differentiating factor between seeing the gorilla and missing it completely.  As is so often the case, history is replete with instructive examples – for those who are willing to learn from them.  This publication is dedicated to that end.

The Long and Ignominious History of Overindebtedness

I contend that we can learn much from the study of deflationary Japan.  More than twenty-five years ago an enormous debt and real estate bubble broke in Japan.  Even now, almost a full generation later, overindebtedness still plagues Japan – and explains why interest rates are falling both there and globally.  The chart below shows the remarkable correlation between falling five year Japanese interest rates on sovereign bonds and the relative performance of the stocks in the Japanese banking sector to that of its stock market index, the Nikkei. 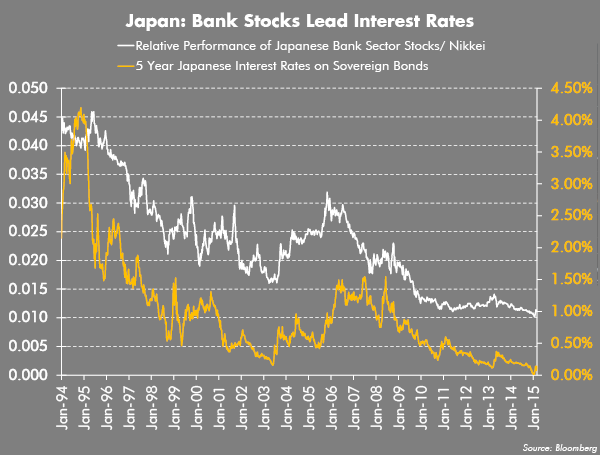 Japan has furiously attempted to reflate its collapsed bubbles for many years in a bid to stem the forces of deflation.  During this time the end result has been falling interest rates and the long term underperformance of banking stocks relative to the Japanese market.  Recently, the Japanese stock market has been rallying, as have the Japanese bank stocks.  Japanese interest rates, however, have remained low – while the relative performance of Japanese bank stocks has lagged.  Is Japan finally putting the ogre of deflation behind it?  If so, Japan’s nearly 40% devaluation versus the U.S. dollar surely gets some credit for this turn in the cycle.  But can every country in the world devalue its way to prosperity?  Sadly the answer is no. Many countries tried to do this in the 1930s. This experiment ended poorly. 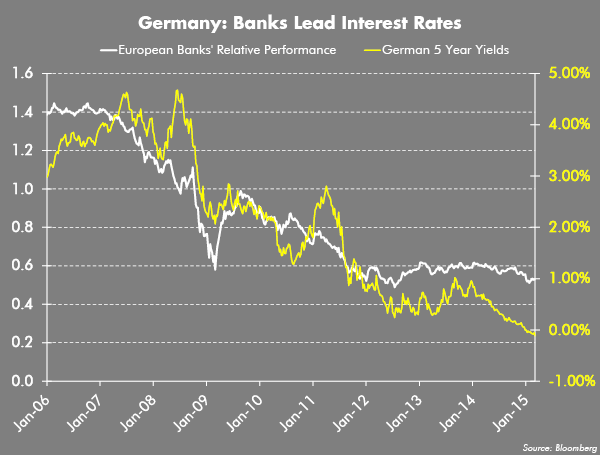 The chart above shows that stocks of the European banking sector are underperforming the European stock market, such as we saw in Japan after it had tipped into deflation.  Coincidence?  I do not think so.  This brings us to the outlier in the world – our own good old USA, the last peaceful bastion for those bond investors seeking yields.

Why are U.S. Bank Stocks Still Underperforming the Market?  Is this a Buying Opportunity or a Note of Caution?

Does the lagging performance of U.S. banking equities hold a message for the long-term direction of U.S. bond yields?  Is the direction still down?  Surely the history from Japan and Germany suggest that this may be the case.  Or should we be considering the opposite case – that the market is providing us a welcome buying opportunity for stocks that will benefit from rising interest rates.  One view will be right and the other wrong.  Much will be riding on this outcome. 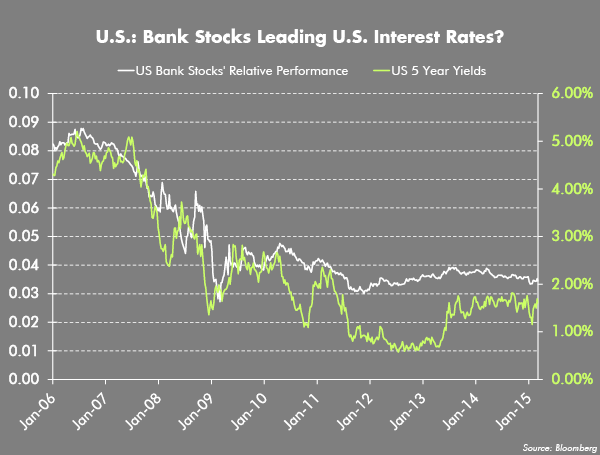 After all, U.S. interest rates are now at a modern all-time high versus those in Germany.  U.S. interest rates relative to those in Japan are also at the higher end of their range.  Little wonder that the U.S. dollar is rallying so strongly.  The premium yield we offer over that of our trading partners is proving to be an irresistible incentive for foreign investors.  A stronger dollar has been a boon for the U.S. so far.  At some point could the stronger dollar become a bad thing for the U.S. economy?

In the last two days, the trade-weighted U.S. dollar rallied two full percent versus the currency values of our trading partners.  Unless U.S. productivity improved by two full percent in these two days then every business in the U.S. saw its cost position relative to its global peers worsen by two percent.  How much export business will the U.S. lose because the stronger dollar makes our goods less competitive?  How much more attractive will it be to import cheaper goods to our shores?

These real world developments are likely in time to slow U.S. growth and limit the upward pressure upon U.S. interest rates that so many now anticipate.  Perhaps the recent volatility in the markets is starting to suggest there may be a cost associated with this super-strong dollar.  Even with our yields at current levels, desperate foreigners seeking higher yields find compelling reasons for continued investment into the U.S. credit markets.

Right now perhaps the most strongly held view across all the financial markets is that the U.S. Federal Reserve is about to start raising interest rates.  Perhaps this view is the correct one.  Just yesterday renowned bond investor Jeffrey Gundlach suggested that the U.S. Federal Reserve will hike rates this year but also that this will eventually be seen as a mistake and be retracted.  If he is right, what are the odds that the market senses this error in advance and U.S. interest rates keep falling?  Or, conversely, is the best buying opportunity right now in financial or U.S. housing related stocks, whose lagging performance does not reflect improving fundamentals from rising interest rates?  These are questions to which I devote a lot of thought.  Watch this space!  The “invisible gorilla” experiment suggests that we pay attention closely – not just to the outcome that we expect to see – but also to the unexpected! •

“Markets are constantly in a state of uncertainty and flux and money is made by discounting the obvious and betting on the unexpected.”
-George Soros

“If you do not expect the unexpected you will not find it, for it is not to be reached by search or trail.”
-Heraclitus

“There are three things extremely hard: steel, a diamond, and to know one’s self.”
-Ben Franklin’s Poor Richards Almanac, 1750

“…most of us are utterly unaware of this limit on our awareness.”
-Christopher Chabris

“I have but one lamp by which my feet are guided, and that is the lamp of experience.  I know of no way of judging the future but by the past.”
-Patrick Henry