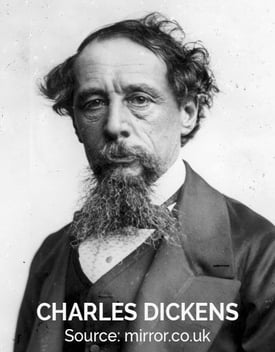 Charles Dickens was one of those rare and durable authors who was acclaimed in his own time and whose work is still fresh to this day.   Dickens was widely honored as a true literary genius, creating some of the world’s most well-known and best-loved characters.  Can you imagine Christmas without some version of Ebenezer Scrooge in Dickens’ A Christmas Carol?  Neither can I.

One of the books for which Charles Dickens was most renowned was Great Expectations, first published in London as a weekly series of chapters starting in December 1860.  The central character, a poor orphan named Pip, struggles through poverty and rejection from the love of his life, Estella, who cruelly spurns him.  A sudden and remarkable reversal of fortune finds Pip on his way to London, where a mysterious benefactor has suddenly elevated Pip to be trained as a gentleman and inherit a fortune.  Pip could hardly believe his good luck. Many other surprising reversals follow in the book.  I won’t reveal any more of the book in case you haven’t read it yet.  It’s wonderfully written and deep on many levels.

The Importance of Expectations

Reversals of fortune and the vicissitudes of fate are not limited to the world of fiction.  We also find them in investing!  They say that if you live long enough, that you will see everything!  The longer that I am in the investment business, the more I realize the truth behind those words.  Perhaps of all the things that can change in the world of investing, nothing changes faster – or with greater impact - than expectations.  Anyone who has used a discounted cash flow calculation to value a stock or bond cannot fail but to be astounded at the enormous impact of a tiny change in one small assumption.  An infinitesimal change in assumed growth, or a tiny tweak to long-term commodity prices and the outlook for the security can change drastically.   The initial discovery of this truth is one of the most sobering moments in the education of any young analyst.  But changes in expectations are not limited to the discipline of valuation.  The investment world is filled with examples of events taking a path that no one expected, with huge consequences for investors.

On Sale: Paying One Penny on the Dollar

Such stunning reversals of fortune seem to happen more than their fair share in the commodity markets. Somewhere, someone, right now cannot believe what just happened to them today when the “unthinkable” came upon them.  An illustrative example took place in recent weeks in the beaten down mining sector.

In 2007 mining company Xstrata had purchased Jubilee Mining and its two nickel mines for AUD $3.1 billion.  These mines were sold in recent weeks, in two separate transactions, for a combined AUD $34.5 million - for one penny on the dollar.

One of the buyers is a company where Kerry Harmanis is the largest shareholder. Mr. Harmanis is the same executive who made a $500m fortune selling Jubilee Mining to Xstrata back in 2007!  Now Mr. Harmanis is back paying one penny on the dollar for the same assets he sold.  Clearly in retrospect the transaction in 2007 massively overvalued these nickel mines.  But can the value of these assets have changed so much, so fast?  Are they really only worth 1/100th of their former value?  What is the real value of these mines? 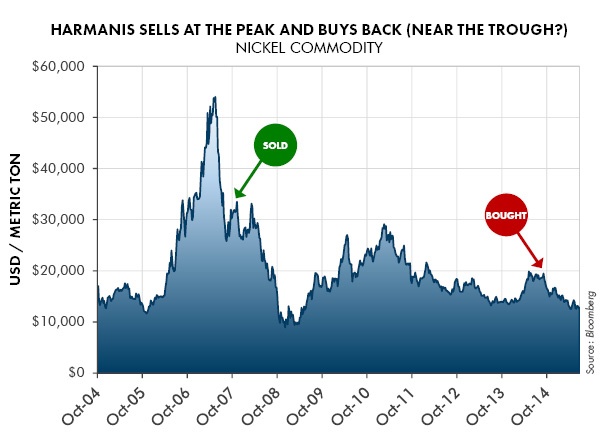 Life Happened to the Once Overvalued Stocks in the Nickel Market.  What Went Wrong – and More Importantly – What Could go Right from Here?

What went wrong along the way for the ill-fated purchasers of these once highly-prized nickel mines?  Many things.  They all serve as a warning of the dangers of paying too high a price for an asset or overestimating what can reasonably be known about the future.

Such enormous mistakes happen more often than you would think in the world of investing.  These mistakes may be an excellent opportunity – going forward - for shrewd investors.  Investors can earn great returns by objectively analyzing the stocks of heavily beaten down companies and sectors where expectations have been crushed and valuations are compelling even though the near-term outlook may seem bleak indeed.  Many times the price of outsized long-term returns is patience: the ability to sit through bad short-term news and volatility!

Below are four of the best tools every investor could use to help overcome such challenges in the market:


John Lennon was Right.  The Only Thing we Can Control is the Price we Pay for an Asset.

In all of our investments there is no better beginning we can ask for than to buy an asset for a very cheap price.  A cheap purchase price is the single most important long-term driver of investment results.  The very brightest and most gifted of investors will do this successfully again and again.  They will use the volatility of the cycle as their friend, buying when assets are cheap and unloved, and selling when assets are overvalued.  We can all learn from their patience and discipline.

G. K. Chesterton, a famous literary critic, admired Great Expectations for the novel's optimism.  Another critic, Edmund Wilson, valued it for its pessimism!  Perhaps both were right?  In similar fashion, both extremes of optimism and pessimism express themselves in the markets.  Dispassionate investors may profit from extremes in expectations when these flawed expectations drive asset prices far away from intrinsic values.

Pip’s benefactor in Great Expectations won his fortune in Australia.  Perhaps another fortune may await other investors in Australia as they dig among the wreckage of the prior mining cycle?  No one can know for certain but anyone who starts by paying one penny on the dollar for an asset surely has a good head start!

As the cycle inevitably turned from boom to bust perhaps it may yet turn again to boom?  The time-honored cycle is repeating itself again, as it has always done.  Certainly when I survey the world of commodities I see a familiar pattern.  New management teams at mining companies are rigorously focused on lower costs.  Spendthrift CEOs were fired years ago when the cycle collapsed.  New executives were brought in to clean up the mess they inherited from the prior deal-hungry generation of CEOs.  These new executives had no part in the collapse of the now-failed upcycle and just want the memory of it to go away.  Might these new executives make a mistake of equal magnitude, only in the opposite direction by selling at give-away prices?  If so patient investors who can appropriately value these assets may profit.  Stranger things have happened in the markets!  The timeless cycle of boom and bust runs on. •

“I have great expectations for the future, because the past was highly overrated.”
-Sylvester Stallone

“How do you make a small fortune in mining?  Start with a large fortune.”
-Mining Investment Wisdom

“A mine is a hole in the ground owned by a liar.”
-Mark Twain

“Take nothing on its looks; take everything on evidence. There's no better rule.”
-Charles Dickens

“I base my calculations on the expectation that luck will be against me.”
-Napoleon

“Blessed is he who expects nothing for he shall never be disappointed.”
-Alexander Pope

“Everything comes if a man will only wait.”
-Benjamin Disraeli

“Life is what happens while you are busy making other plans.”
-John Lennon