Greece: War of Creditors vs. Debtors

It seems as if I have been writing about Greece forever!  But events there do continue to demand attention.  Make no mistake: Greece is on the front lines of global over-indebtedness which is why it’s important to pay attention.  It may well be that in Greece we begin to see the outline of the looming creditor versus debtor struggle that I believe will play out in a growing list of countries in the days to come.   Surely Greece has too much debt – but those debts represent promises to repay that creditors expect Greece to honor.  After all, investors hold Greek debt on their own balance sheets as an asset.  How will all this play out?

My belief is that our current system of central banking is an outgrowth of our political environment.  If that environment is changing, perhaps the future of central banking might change as well?  Certainly it is a thing to behold to see Europe’s creditor powers exercise such incredible power over Greece, essentially foreclosing on an entire sovereign nation.  It’s an awesome display of firepower but there is no denying that it’s a dark time for the people of Greece.

In this weekly research piece, my goal is to examine sections of the market that investors overlook.  My goal is to ask questions that no one else is asking.  Sometimes those questions spring forth from half-sensed connections that a little thinking (and writing) can tease out and clarify.  The question I find myself asking today is this: even though Europe’s creditors can foreclose upon Greece, should these creditors really throw their full power at Greece?  Clearly this is a desperate effort to make an example of Greece’s leftist government.   Europe’s creditor powers seem to believe that, if they can humiliate and terrify Greece into submission, they may keep the other far larger debtor countries in line.  These countries are Spain, Portugal, Italy, and largest of all, France.   When I searched my memory for history’s analogues, I thought of the famous Mitylenian debate which Thucydides shared with posterity in his History of the Peloponnesian War.  This week’s “Trends and Tail Risks” examines what this epic work has to say about current events in Europe. 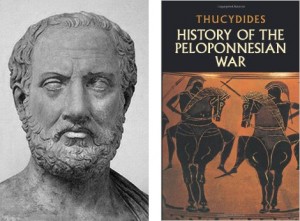 Thucydides: The Father of History

Thucydides lived more than two thousand years ago, from 460 to 400 B.C., according to some estimates.  His epic History of the Peloponnesian War is his monument to posterity.  Fittingly for today’s times, these events took place in Greece, during the war between the empire of Athens and its rival Sparta.  Of all the worthy sections of this tome, one stands above all the rest.   The Mitylenian Debate records timeless insight into the art of solving political questions.  And make no mistake: political questions are what is driving events in Europe, centered on Greece.

The ancient Mitylene was a city in the Delian League, an association of Greek city-states that had united under the leadership of Athens to defeat the Persian invaders of Xerxes I.  Members of the league paid a tax that helped fund common defense and other actions, over which Athens increasingly took control.  Mitylene – like Greece today – revolted against the prevailing power of Athens – the European creditor powers in this analogy.  Athens got word of this and sent a fleet to confront Mitylene with an ultimatum.  Mitylene was surrounded and starved into subjugation by the powerful Athenian navy.  Athens’ victory was total.

Back in Athens, the democratic Assembly was meeting to consider what to do with their victory.  Hatred and anger burned brightly against the rebels of Mitylene.  Athens wanted to make an example of Mitylene to discourage other revolts and reveled in its power to do so.  The Assembly called for the death of every man in Mitylene and for every woman and child to be sold into slavery.  A ship of death made its way to the shores of Mitylene to carry out this draconian edict.

The next day cooler heads began to prevail in Athens.  Was the brutal condemnation of the entire population of Mitylene really the best course of action?  Or was this simply the outgrowth of total victory and abject fear of the contagion of political revolt spreading beyond Mitylene?

Some Athenians began to wonder if their initial spiteful judgement had been far too aggressive.  There were two lead spokespeople, each of whom championed the opposite strategy on how to deal with Mitylene.  Cleon stood by the policy of wiping out Mitylene.  He told the citizens of Athens that they ran an empire and were hated and feared by the subjects of that empire.  Weakness would not help Athens retain power, only deadly force and power could do that.

Diodotus took the opposite tact, making the thoughtful point (very pertinent in Greece today!) that vengefulness and violence were not the right way to run an empire.  He counseled that Athenian harshness would only encourage better planning among the enemies of Athens, since failure clearly meant death.  This would encourage the foes of Athens to plan more carefully next time before they revolted!  Should Europe’s victorious creditor powers heed Diodotus’ counsel as they gloat over the corpse of the shattered Greek government?  I doubt they will do so.  But I can hope.  Perhaps the recent IMF announcement that Greece needed actual debt forgiveness can usher in a long-needed period of rationality in Europe and recovery for Greece.

I personally can’t shake the feeling that we are living in historic times.  Might the growing creditor vs. debtor battle being waged in Greece suggest that the status quo is changing – or perhaps peaking?  By status quo, I mean the current system of the all-powerful central banker and the hegemony of the creditor.  Make no mistake: it was the political decision of the European Central Bank to limit the liquidity available to Greek banks that was the actual catalyst for bank closures in Greece.   That’s how powerful central banks have become.  Central banks grew to be that powerful based on a political consensus that fostered their rise and created the hegemony of the creditor.  Central banks seem to have a hand in everything these days, complicating the job of thoughtful investing.  So far, the trend that they are on is gathering ever more power.  Perhaps the events we are now witnessing mark the rise of a stronger and more controlling draconian force prepared to stop at nothing to enforce the status quo?  Certainly empires such as Rome persisted for hundreds of years under a regime of such brutal repression.  Which way might this play out?  No one can know for sure – but I would really like to know the answer!

I have come to grips with the sad fact that I, along with all other investors, will never be clairvoyant about the future.  But neither does that mean that investors can ignore the trends around them.  My goal as an investor is to do two things successfully: 1.) to identify sound, defensible businesses that should outperform over time across cycles and setbacks and 2.) to keep a wary eye on the forces that may end the cycle of prosperity that the markets have enjoyed.  The day will come when I will – out of an abundance of caution – reduce investments in faster growing instruments to seek a strongly built harbor within which to ride out the storm.  This is not a question of “if,” it’s a question of “when.”  It’s my confident hope that anticipating the major issues of the day can be an invaluable asset – when the time is right.  This is one of the reasons that I write "Trends and Tail Risks."

Thucydides was one of the first historians to talk about the intelligent application of power.  His Mitylenian Debate represents the most concise treatise on this issue I have ever read.  I highly recommend that you read it as well.

It is amazing to me how strongly it speaks to the dangers of the harsh crushing of a sovereign people, such as is now underway in Greece today.  Like Diodotus, I don’t think that subjugating the adversary is the way that smart creditors retain their hegemony over debtors, not in the very long run anyway.

Such a strategy seems wanton and ill-advised.  I fear that future leftist governments in Europe that may agitate for debt relief will learn from Mytilene’s experience in 427 B.C. – and from Greece today – they will plan ahead!  Greece’s leftist government, led by Syriza, has been humiliated.  If the leftist party Podemos in Spain or the Five Star Movement in Italy follow in the wake of Greece, I bet that the lesson they will take from Greece is to plan ahead!  Failure clearly means political death.  So don’t go down that path unless you can go all the way without blinking.   Syriza’s politicians had failed to plan.  Future political leaders will not make that mistake.

This escalation of the creditor vs. debtor struggle interjects a highly inflammatory element into an already unstable situation.  In planning ahead, Europe’s debtors will raise the odds substantially that the next round of creditor vs. debtor brinksmanship could become more extreme, and eventually, more damaging.  There is only so much control that anyone has when tempers are this high.  Next time the radicals in Europe’s debtor countries may push even farther than Greece’s Syriza.  That is my worry anyway.

Diodotus’ voice of moderation won over the Athenians.  They sent a double-manned ship to row all night to forestall the draconian punishment the first ship was sent to enforce.  The second ship of clemency arrived right before the first began to mete out its grim sentence.  It was only by a few minutes that death and enslavement was averted.  Will Europe send a fast ship to Greece to reverse its brutal policy enforced by the victory of the creditor powers?  I hope that the answer may be yes.  That hope is becoming increasingly strained.  Much difficulty may lie ahead of us if Europe continues to heed the voice of Cleon. •

“Greece has been devastated and humiliated. Europe has showed itself Pharisaical, incapable of leadership and solidarity.”
-Romano Prodi, former Italian prime minister

“Haste and anger are... the two greatest obstacles to wise counsel.”
-Diodotus

“…. strong do what they can and the weak suffer what they must.”
- Thucydides, The History of the Peloponnesian War

"The bravest are surely those who have the clearest vision of what is before them, glory and danger alike, and yet notwithstanding, go out to meet it.”
- Thucydides

“Of all manifestations of power, restraint impresses men the most.”
-Thucydides