Interest Rates: The Market Leads and the Fed Follows

The Wizard of Oz is one of the most popular and famous movies of all time.  Almost 80 years ago, its quotes and idioms entered the lexicon of the English language and cinematic history.  Its high points are the stuff of legend.  The film was nominated for six Academy Awards.  It lost out for Best Picture only to the equally iconic Gone with the Wind.  The Wizard of Oz gave to the world some of its most beloved characters.  My favorite character was the Great and Powerful Wizard of Oz.  He used smoke, mirrors, and thunderous noises to exaggerate his powers.  Ultimately, he was just a man behind a curtain. 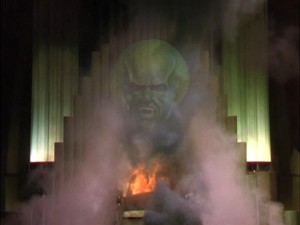 Central bankers get amazing press.  I never cease to be amazed at the things for which they get credit.  From listening to the media and market pundits fawning over them, you would think that the very foundation of the earth owes its existence to the modern central banker.  Perhaps we should marvel at how mankind ever managed to survive before central banking?  Certainly the media seems intent on selling that story.

Central Bank Policy Choices are Important but not Omnipotent

There are many things that central bankers have gotten right – and believe me you want them to get more things right than wrong.  Central bankers’ mistakes are very costly.  For instance, in 2008 the Fed (finally) realized that its monetary policy was too tight despite having some of the lowest interest rates in recorded history.  The Fed began aggressively buying bonds in a program that would come to be known as “quantitative easing,” or QE.  Many pundits howled about the dangers that this unconventional move could unleash and expressed many understandable fears about such a leap into the great unknown.  Still, to its credit, the Fed did move forward despite such criticism. By June of 2014 the U.S. had regained its old peak of industrial production, set seven long years ago in 2007.  Our recovery has been awfully slow by any historical standard.  Nonetheless, the Fed’s policy moves paid off, especially when contrasted to Europe. 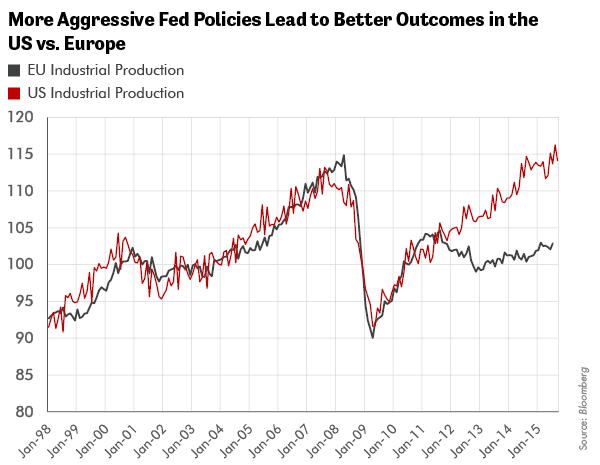 Europe’s industrial production, by contrast, even now still languishes more than 10% below its 2007 peak.  Only in mid-2012 under the threat of a crisis in Greece and incredible turmoil throughout Europe’s credit markets, did Europe’s central bankers adopt the Fed’s more unorthodox playbook.  Interestingly, mid-2012 also marked the beginning of an acceleration in European industrial production.  Is this a coincidence?  I doubt it.

One common refrain from 2008 until now has been serially disappointing growth and lately, falling inflation expectations.  Why have smart people repeatedly made this mistake over and over – and not adjusted their thinking for what clearly seems to be a lower growth world?  Even the Fed, which got so much right in 2008, has been unable to adjust its thinking.

Not in Kansas Anymore

For a long time now I have been pointing out signs of important change in the credit markets, signs that many people acknowledge but seemingly do not fully embrace.  Everyone’s base case assumption seems to be that somehow this is all just a passing strangeness.  But when do we take a look at the persistence of the evidence before us and embrace the world as it is, and not as we wish it to be.  Just look around: the lowest interest rates in 500 years, negative interest rates in Europe, the slowest decade of growth in the US since the 1790s.  Clearly we are not in Kansas anymore.

Central Bankers are not All-Powerful

Thankfully the lessons of history seldom fail us, if we would only study them!  One of the lessons that we can learn from history has to do with the direction of short-term interest rates, which the Fed has been repeatedly threatening to raise for a long time now.  Much ink has been spilled about a possible rate hike in December.  “Will they or won’t they?” seems to dominate the world’s financial narrative right now.

My own take is different.  At such a juncture, I prefer to focus not on the Fed but on the one actor who has a proven track record of consistently outsmarting the Fed when it comes to the next move in interest rates: the market!  One of the reasons that I write “Trends and Tail Risks” is to challenge many of the false – but unquestioned - assumptions in the market that keep investors from being more successful.

It was quite amazing for me to watch the Fed scramble for a full year to catch up to the spreading global financial crisis from 2007 to 2008.  The Fed would not start to cut interest rates until 2008.  The market had begun to lower interest rates, as defined below by the Eurodollar market (the price to borrow money for a 3 month time period, one year into the future) from mid-2006, with marginally lower highs in June of 2007 and again in July of 2007, before the market’s rates began their precipitous decline.  The Fed did eventually catch up, and finally pull ahead of the market’s interest rate changes during the crisis, but only with a long delay.

For me, a student of history, all this fawning over the world’s central bankers makes me uncomfortable.  History has never been kind to “rock star” central bankers, the first of which was John Law whose star crashed to earth in 1720s France.  Or perhaps one need not reach into antiquity but rather see the title of the Per Jacobsson Lecture delivered in 1979 by former Fed Chairman Arthur Burns: “The Anguish of Central Banking.”  Sometimes we need to be reminded of where we came from to understand where we are now.  Even the “Maestro,” Alan Greenspan, came under intense criticism (after the housing crash) for the role many thought that he played in creating the U.S. housing bubble.

My own sneaking suspicion is that perhaps the next systemic problem that we will face in the markets is once again already hiding in plain view.  And that perhaps once the dust settles from that future crisis, reasonable people will again question if our central bankers created the preconditions of that crisis too.

In the meantime, do not cede your judgement to the Fed and its cadres of watchers.  History is clear that each major inflection point in interest rates is priced in first by the market and only later by the Fed. 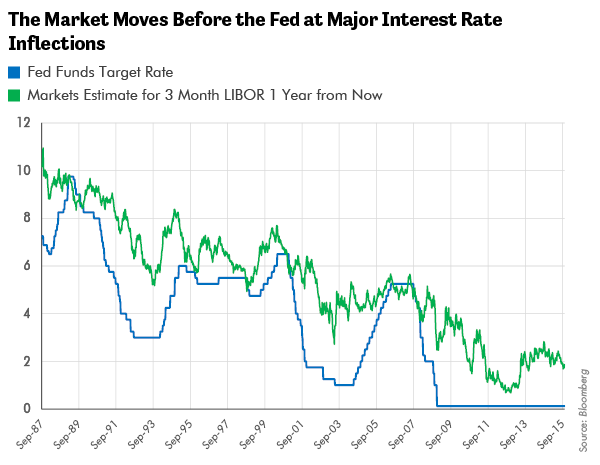 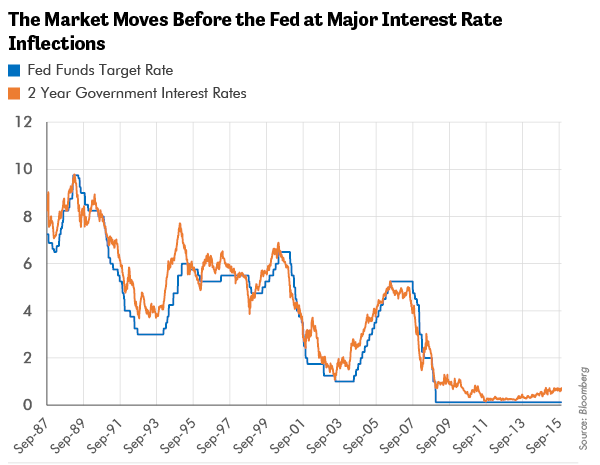 Many of the market’s measures of interest rates peaked more than a year ago.  Granted some of these yields are higher than current Fed Funds interest rates, which are still nailed to the floor near zero.  So the market continues to price in that interest rates will be higher in the short run than they currently are right now.  But why is the level of interest rates expected by the market rates falling in the last year?  Does this suggest that any tightening cycle by the Fed is likely to be muted?

Investors are forced to navigate a sea of financial mis-information to meet their goals.  Curious but dedicated and scientific inquiry is the best way to dispel rumors and uncover the reality behind financial markets.  Market pundits have tried to impose upon us a false narrative of omnipotent and all powerful central bankers.  While our central bankers are indeed powerful they are definitely not all knowing.  History shows this quite clearly.

The end result: never ending navel-gazing about potential Fed interest rate hikes (will they or won’t they!?) remains a wasteful exercise.  Time is better spent actually studying the history of the market to see the deeper truth.  The truth is that the market leads the Fed when it comes to peaks in interest rates.

My own view is that one of the most important prices in the market is the clearing price to “rent” or borrow money.  As growth and inflation slow, money competing to earn a return is forced to accept a lower clearing price as demand for it falls and the supply of it rises.  We see this in the market as falling interest rates the market charges to its most credit-worthy borrowers.  It is not the Fed that is holding down interest rates; it is the market.  It is deeper truths such as this that can help us understand the markets as they are and arm us with the knowledge we need to profitably navigate an uncertain world with confidence. •

Source: The Great and Powerful Wizard of Oz, www.oz.wiki.com

“I have no special talents.  I am only passionately curious.”
-Einstein

“It’s not what you look at that matters, it’s what you see.”
-Thoreau

“The scientist is not a person who gives the right answers, he's one who asks the right questions.”
-Claude Levi-Strauss

“Since becoming a central banker, I have learned to mumble with great incoherence. If I seem unduly clear to you, you must have misunderstood what I said.”
- Alan Greenspan

“Pay no attention to that man behind the curtain.”
-The Wizard of Oz

“I don’t want realism.  I want magic!  Yes, yes magic!  I try to give that to people.  I misrepresent things to them.  I don’t tell the truth, I tell what ought to be the truth.”
-Blanche DuBois in Tennessee William’s Streetcar Named Desire

“Every revolution evaporates and leaves behind it only the slime of a new bureaucracy.”
-Kafka

“God is on the side with the best artillery.”
-Napoleon