The Message of Gold

Simplicity should be a constant goal in investing.  Note the key word: goal.  Sadly it’s a daunting effort to reach a simple understanding of our increasingly complex financial world.  Often it takes years of constant study to arrive at an insight that is, in retrospect, incredibly simple and even painfully obvious.  That is both the frustration and the joy of investing!  Thankfully, though, knowledge is cumulative.  Block upon block we are building a better understanding of how to profitably navigate today’s volatile markets.

My goal is to constantly refine a simple yet causal framework that can explain how the world works and how the world is changing around us.  As our understanding grows, we can see more clearly the best course of action for the investments we favor, as well as the investments that we should avoid.  Our asset allocation has benefited from avoiding the worst of the collapses in emerging markets in 2013, high yield in 2014, and the financial sector in late 2015/early 2016.  Also, identifying the best companies within the sectors we favor has also made our efforts more fruitful.

Our focus on market-based indicators is one of the key disciplines that made this possible: to harness the power and insight of the markets.  This is why these pages are often filled with such seemingly obscure items as commodity prices, credit market indicators, and gold.  These prices are useful tools because the markets use prices to allocate resources, to balance supply and demand.  This knowledge is the bedrock on which our investing framework is built.  If we could only grasp the message of these markets more deeply we could better understand what outcome the market is working to achieve and would thus better understand our financial world and how that world is changing.   In today’s Trends and Tail Risks we revisit the world of gold to understand the message of its recent price strength.

The Message of Gold: Insight into the Future of Commodities

Gold is one of the oldest, and most sensitive of markets.  The last five years have not been kind to gold prices.  Gold’s bruising five year decline totaled 45%.  Gold did not suffer alone.  Possibly no other markets fell as hard or as far as commodities, which endured one of their worst bear markets in almost 500 years, with the equal weighted CRB Index of twenty two commodities falling a total of 49% over five consecutive down years.  Two five year declines of nearly 50% - could this be a coincidence?  We don’t think so.  The future of commodities is intrinsically linked to gold, for reasons that we explain below.

Watch Gold to See Where Commodity Prices are Going 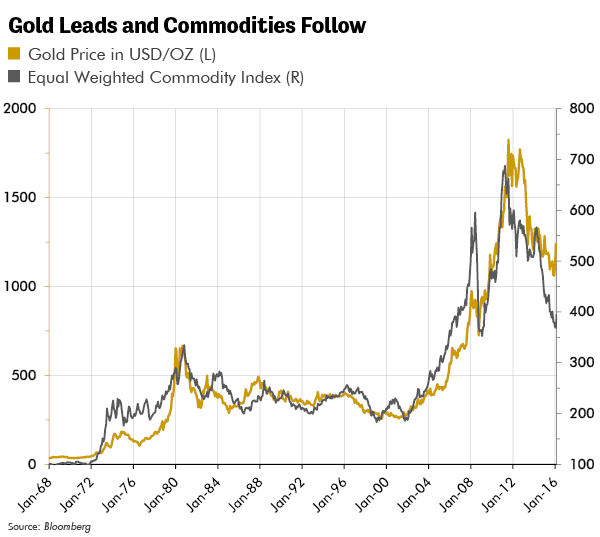 Remember that our microeconomic textbooks taught us that, in the long run, prices revert to their marginal cost of production because this price balances supply and demand.  So the commonality among these seemingly disparate commodities above is that their prices and their marginal cost of production are in dollars.  The ability to forecast future marginal costs is the ability to forecast future commodity prices.  That is where gold comes in.

Gold helps us to forecast future commodity marginal costs because gold prices are the purest reflection of the value of money using an honest and stable measurement.  When we see gold prices rise, what we are really witnessing is a fall in currency values relative to a more stable gold price.  As the value of a currency falls, prices in that currency rise, leading to higher marginal costs of production among the many diverse costs that go into producing commodities.  The changes that gold indicates now flow through to prices later, as those changes take time to impact the underlying marginal costs of production.

One of the reasons that gold holds it value over time is because gold supplies can only change at a slow pace.  According to the World Gold Council, the above ground stocks of gold number 183,600 tons, which if all piled in a cube its dimensions would measure less than 75 feet!  Annual gold production in 2015 totaled 3,186 tons which represented a 1.7% total increase in global stocks.  The quantity of the world’s currencies, such as the U.S. dollar, Euro, or Yen, however; do not have this natural constraint on their supply growth.

Do Not Underestimate the Power of an Extremely Simple Insight

Commodity prices are driven at least as much, if not more, by gold as they are by the underlying supply/demand of each discrete commodity.  This way of thinking about the commodity markets is considered radical by many analysts of these individual markets.  Often, sector specialists who have spent their careers in one narrow field cannot extricate themselves from an overly detailed focus, finding themselves deeply buried in the weeds of complex spreadsheets where a tiny change in the supply and demand balance can lead to enormous commodity price changes.  This detailed focus is a necessary discipline – but is not sufficient to explain price changes!

In early 2004, we were just starting to see the fruits of all the billions of dollars of investments we had made on behalf of our investors in order to profit from higher commodity prices beginning back in 2002.  I was on a research trip with a dear friend who was one of the world’s most highly respected and experienced commodity analysts.  The quality and detail of his work on supply and demand were incredible, for a whole host of commodities.  We had just spent a long day touring one of the world’s largest copper smelters in Hamburg and were enjoying a stein of beer.

In vino veritas.  He asked me “No offense but: how was it that you (with only two years of experience in this sector) saw the bull market in commodities so early and invested in it with such conviction?”  What he really wanted to know was what we had caught that so many others had missed.  And our answer was simple, we said “We were watching gold and knew what it meant.”

Turning once again to the present, possibly no other asset class joined gold in free-fall more than the beleaguered commodity sector, which endured one of its worst bear markets in almost 500 years.  The CRB Index of seventeen equal weighted commodities fell 49% for five years in a row.  Investments often associated with commodities, such as emerging markets and basic material companies suffered as well.

What is Gold Telling us Now?

What clues does the deeply insightful gold market hold for us now?  Why is gold moving now and why do we believe this move will be sustained?  These are important questions that we will explore in our future research.

One possibility to which we remain very open would shock conventional wisdom, and is therefore deeply appealing to the contrarian in us: higher gold prices driving higher commodity prices, even if global growth continues to disappoint!  This set of conditions, if it plays out, would help construct the necessary preconditions for substantial investment outperformance: a large and important disagreement with the market that ultimately resolves itself with the market embracing our views. Only time will tell for sure, but I like our odds!

Ultimately, perhaps the most important information we can draw from the gold market is to use it to create a falsifiable hypothesis about our future expectations.  Either the market will move prices to support our views, and lend conviction to the views above, or future prices will move contrary to our expectations and help us to realize our error quickly.  Either outcome helps us to move forward with better understanding – but there are more profits in the former outcome!

The great constant of investing is the never-ending requirement for patience!  It took patience to build commodity sector positions for two full years beginning in 2002 during the early days of the gold bull market.  So we should remain hopefully optimistic about the sector but, as always, be deliberate in how we choose to invest in it.  The race we run is a marathon and not a sprint.

Our framework since mid-2014 was that deteriorating credit quality would result in slowing growth, rising financial distress, and a much less aggressive set of U.S. Federal Reserve interest rate hikes than most anticipated.  We further believed that this trend would benefit bonds of the highest quality and the longest duration and, ultimately, benefit gold the most.  Subsequent events have followed this script but their exact shape, form, and pace has been unique to this cycle.

Now we (finally!) have an additional and seemingly confirmatory price signal in the reemergence of gold’s bull market.  Should this move in gold prove sustained, as we expect it will, our investments will increasingly include rising exposure to beaten down commodity shares with characteristics that we favor: low cost producers with the strongest balance sheets valued at less than the replacement cost of their assets.  Even among these survivors, stock prices for many are off 75% or more from their peaks.  As always, we will constantly monitor events with an open mind, but believe that our analytical framework gives us an advantage even in today’s volatile markets. •

“It takes 15,000 casualties to train a major general.”
- Ferdinand Foch

“Revolutions are good times for soldiers of talent and courage.”
– Napoleon

“Thus it is that in war the victorious strategist only seeks battle after the victory has been won, whereas he who is destined to defeat first fights and afterwards looks for victory.”
-  Sun Tzu

"An ounce of sweat will save a gallon of blood."
- Patton

“Our basic plan of operation is to advance and to keep on advancing regardless of whether we have to go over, under, or through the enemy.”
- Patton

“The first virtue of a soldier is endurance of fatigue, courage is only the second virtue.”
- Napoleon