The Best Offense is a Good Defense

High industry concentration, strong capital discipline, and the likelihood of unanticipated growth from rising global conflict should continue to drive the long-term outperformance of stocks in the defense industry.

During times of rising international conflict the central function of the state is to safeguard its war-making capacity in order to protect its citizenry.  Thankfully, our times have not been such times.  Rather, ever since the end of World War II and particularly after the fall of the Berlin Wall in 1989, United States’ hegemony has kept the post-WW II order stable.  As the chart below demonstrates, we have enjoyed an almost unparalleled time of peace, despite what the media would have you think.  The graph below shows the number of deaths in battle from 1946 to 2013 per 100,000 people, which has plummeted 95% from its peak.  Compared to the 80 million total deaths suffered in WW II, it's clear that our times have been an oasis of extended peace. 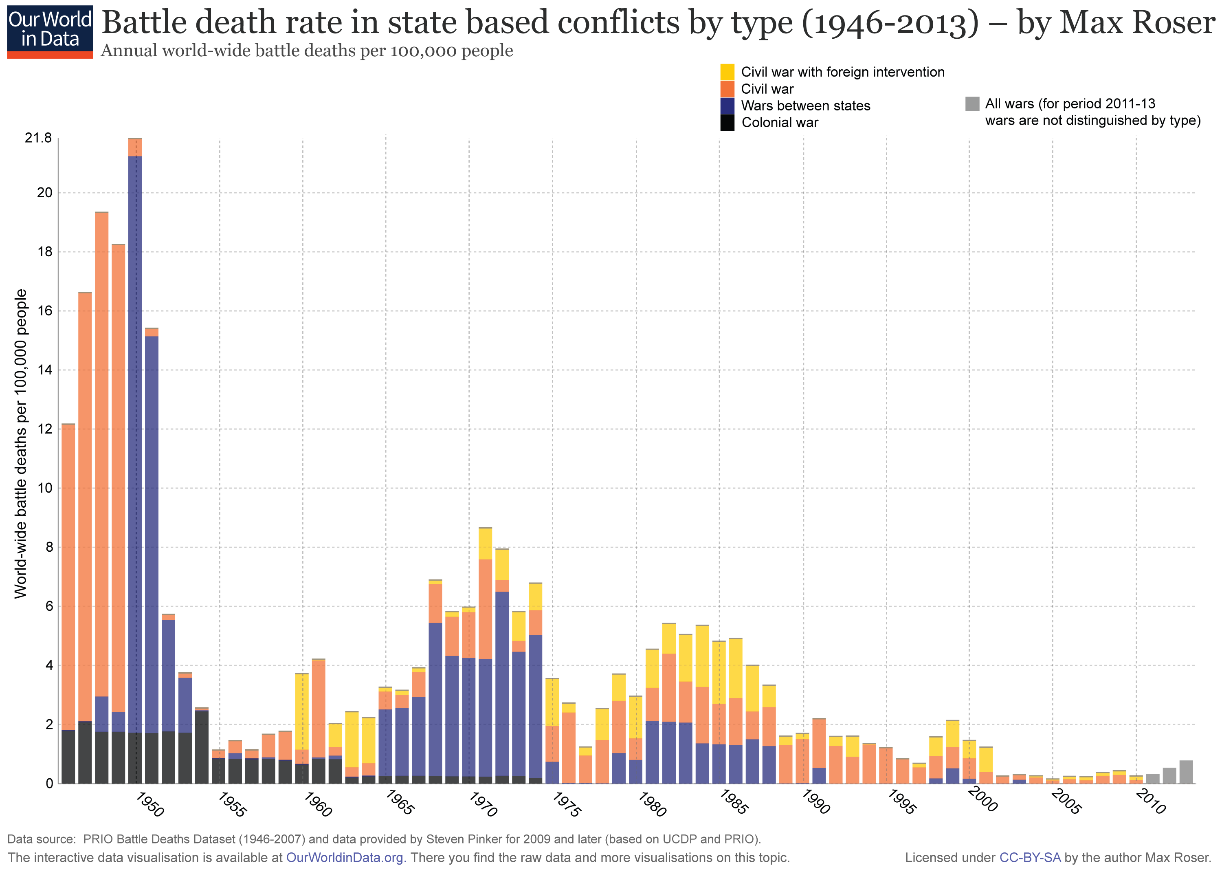 World War II settled, at least temporarily, centuries-old rivalries between the great powers.  Those powers, especially in Europe, were left exhausted, physically and financially.  The United States, and the post war system it created, became the world’s policeman.  Much of the free world flourished under the defensive umbrella we provided and the system of cooperation that accompanied it.  These kept disputes small and localized, reinforcing the stability of the times.  At least, that is what they used to do.

Brexit: The Peak of the Post WWII Order is now in the Rear View Mirror

The post war order was defined by ever-increasing globalization; a seemingly unstoppable trend of expanding liberalization of trade and finance.  Its enforcement mechanism was the result of the densely interwoven threads of global institutions, such as the World Trade Organization for commercial disputes, and the United Nations Security Council and North Atlantic Treaty Organization (NATO) to prevent military altercations.

Quietly this trend died, largely unremarked, with the failure of the Doha Round of international trade negotiations, the first ever failure of such a round of talks. These began in 2001 with a goal of concluding by 2005, reached an impasse in 2008, and were finally given up for dead in late 2015.  This marks the first time in post War history that a round has failed to conclude successfully.  This is a dark omen for those who understand the historic truth that expanding global trade has reinforced peace and prosperity, and that its converse leads, as Bastiat knew, inevitably to war.

Prospects for a resumption of liberalization and international trade growth seem close to nil. Look no further for evidence than Brexit or the bitter and divisive debates about trade and immigration dominating our own election cycle and expressed increasingly all over the world. People are tired of the status quo and are angry.  They want change and are voting to get it. Change they will get but it will not be progress.

Defense Stocks Add Resilience to a Portfolio in Such Troubled Times

It’s easy to understand the frustration driving people to embrace the siren song of the electoral fringe, the beautiful but dangerous creatures who now as in the days of old shipwrecked those who fell under their spell.  We have documented this trend beginning in mid-2014 with the rise of SYRIZA in Greece, the Coalition of the Radical Left ("Big Problems Start Small," May 21, 2014). Clearly this trend is global and advancing rapidly.

In time, when these extreme voices prove just as unable to provide real solutions as the mainstream politicians that they supplanted, we can expect them to blame the usual suspects: foreigners, minorities, despised elites (the one percent) and other such handy scapegoats.  As electoral desperation spreads and gives more of these opportunists the mantle of government, sooner or later one of them is likely to do something so irretrievably stupid as to lead to military conflict.  How to defend ourselves against such ominous portents?  Thankfully a solution exists: ownership of securities in the defense industry.

As the chart below demonstrates, these securities have proven their ability to outperform the market even during peaceful times.  What might they do should military conflict breakout? 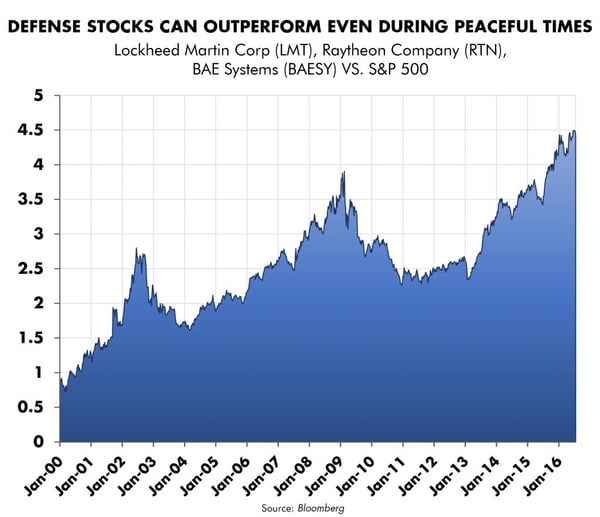 The Defense Industry Has Many Hallmarks of the Most Successful Investments

We can think of few businesses that are more oligopolistic and with higher barriers to entry than defense. How likely is it that a Silicon Valley startup or some upstart will be awarded, for example, the contract for monitoring the U.S. arsenal of nuclear-tipped weapons, or the manufacture of our next aircraft carrier or submarine?  We think the odds are very low indeed.

A handful of “super-prime” defense contractors dominate U.S. and therefore global military spending.  Fewer competitors are always better for economic returns, because each participant has so much more to lose and therefore so much more to gain from rational collective action.  In the business of investing this goes by a fancy term: a highly consolidated industry structure, sometimes called “oligopolistic.”  For the past several years we have been enthusiastic owners of stocks such as Lockheed Martin (LMT), Raytheon (RTN), and BAE Systems (U.S. ADR of BAESY) which together make up one of our largest investments in any industry.

The benefits of industry structure show up in these stocks’ extremely high returns on capital, excess free cash flow, and the disciplined use of this cash for shareholders’ benefit.  All these benefits we have enjoyed, plus the tailwind from the compelling valuations at which we purchased these securities and where some, such as BAE Systems in particular, continue to trade.  These are all pre-conditions for the best long-term returns in equity investing.

Another excellent example is the multi-decade trend now underway at Lockheed Martin to build out the F-35, the next generation global fighter aircraft with an estimated lifetime cost of $681 million per plane, the final one of which is not scheduled for delivery until 2037!   Some of the most explosive investment gains we have witnessed in our investing career have been when oligopolistic industry structures combine with rapid and unexpected revenue growth.  Might this pattern unfold once again in the defense industry?

When thinking about the future, one of the hardest tasks investors must overcome is to imagine a world that may be completely unlike the world we know.  Will Keynes’ insights be applicable to our future?  Will the rise of the “politics of militarism” play serpent to what remains of our “paradise?” Cycles are about volatility and overshooting from extreme to extreme.  First the failure of Doha, then Brexit, and just last week a failed coup in Turkey.

Do we now find ourselves at the breathless moment in the arc of the pendulum of global peace and collective prosperity – hanging motionless in the air before gravity exerts its timeless pull and the inevitable downward swing resumes?  If so, the toll will be numbered in much more than losses in treasure but in millions of lives lost. For once, as a husband and a father, this is an investment forecast we would prefer to get wrong.

Sadly, we think the future outlook for the defense sector has never been better. Put another way, we are increasingly concerned about the prospects for global peace.  Is it really so difficult to visualize rising tensions among the crop of clowns masquerading as our political “leadership?”  Could the full sweep of the cycle lead to military conflict, even among first world combatants?  These concerns are at the forefront of our thinking when we try to visualize the world that our children may inherit, and the risks that investors may have to run to keep their investments safe.

In this publication we have consistently expressed our view that the investing world changed after the financial crisis of 2008.  Many are the headwinds that now prevent traditional investments and asset classes from providing the returns investors came to expect.  Can we master the complexity of this new world to find a way forward?

Our experience has demonstrated that there is always a profitable way to navigate any market cycle.  The job of the professional investment manager is to ask the right questions and seek out the right answers, no matter how unpleasant we may find those answers to be.

The purpose of our study of history is to learn what insight it has for the future. Sadly, many of the same precursors that led to prior global military conflagrations stand forth in today’s headlines: slowing growth from overindebtedness, rising civil unrest, angry voters looking to the political extremes for answers, aggressive finger-pointing at national rivals and minorities.  Today’s events could be drawn from the newspapers of the 1930s.

These precedents are not comfortable ones.  As much as we wish this were not so, our duty as fiduciaries means that we must with a cold and clear eye invest client capital to avoid the dangers we foresee, and – if possible, even profit from them.  So when you look at one of our portfolios, and see a number of defense stocks, know that they have earned their place through superior industry structure, shareholder-friendly management teams, and the prospect of unexpected growth.  Aside from their many other merits, these investments can help protect the portfolio from one of our greatest concerns – the rising threat of global military conflict. •

“All change is not growth, as all movement is not forward.”
― Ellen Glasgow

“What an extraordinary episode in the economic progress of man that age was which came to an end in August, 1914!...But, most important of all, he regarded this state of affairs as normal, certain, and permanent, except in the direction of further improvement, and any deviation from it as aberrant, scandalous, and avoidable. The projects and politics of militarism and imperialism, of racial and cultural rivalries, of monopolies, restrictions, and exclusion, which were to play the serpent to this paradise, were little more than the amusements of his daily newspaper, and appeared to exercise almost no influence at all on the ordinary course of social and economic life, the internationalization of which was nearly complete in practice.”
― John Maynard Keynes

“War is the father and king of all: some he has made gods, and some men; some slaves and some free.”
― Heraclitus

“People sleep peaceably in their beds at night only because rough men stand ready to do violence on their behalf.”
― George Orwell