What does last week’s election mean for the markets?  The election has been positive for the equity market but negative for bonds.  Are bonds through?  A veritable galaxy of investment luminaries have weighed in on this topic, many of whom are predicting the end of the secular bull market in bonds.  Such bold predictions make for big headlines but have, in fact, been made unfruitfully before.  Below we outline our thinking about bonds, and conclude that they have earned their place in a defensive and diversified portfolio.

The story of the Gordian knot was related by Plutarch, a biographer and historian who lived in the first century AD.  Alexander the Great, the greatest conqueror the world has ever known, found himself in Gordium in the 4th century BC wrestling with the legend of the knot.  The legend had it that whoever loosed this intricately tied knot of seemingly impenetrable complexity would rule the world.  Naturally this challenge was irresistible to a determined conqueror like Alexander.  Unfortunately, try as he might, Alexander could not untie the knot.  Finally, according to the story, Alexander drew his sword and cut the knot in two, mastering its riddle with a bold and unorthodox action.  Alexander thought – and acted – “out of the box.” 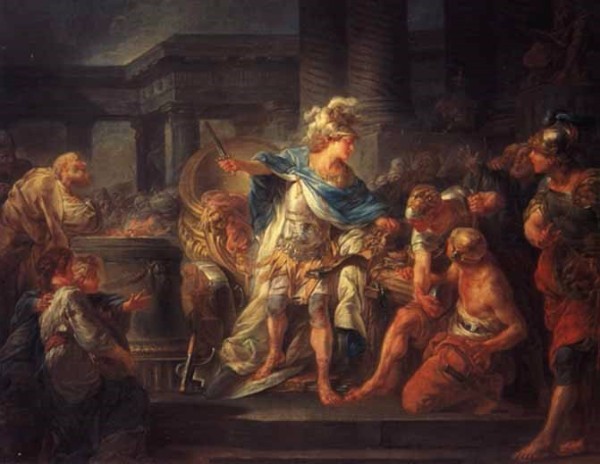 In watching the wild gyrations in the global markets over the last week, I have found myself asking this question: did American voters cut the Gordian knot of slow growth that had stymied the world’s central bankers?  Is that why equities are outperforming and bonds are underperforming?  I would love to believe that the world is in fact such a simple place.  I am not so sure that it is.

I have been a professional investor for almost twenty years and this is one of the wildest weeks I have had the privilege to witness. Those familiar with the markets know the need to constantly question accepted and widely held views.  Last week’s Presidential election was even more proof of that truism.

Markets Get Enthusiastic About Change

This past decade has seen the slowest real growth since our nation was founded almost 250 years ago.  Our central bankers have been wringing their hands for years about this lack of growth.  These “experts”, and their ilk all over the world, have tried all kinds of games and nostrums but always through the lens of how they could stimulate/coerce/fool the world onto a higher growth path.  We the people, the rats trapped in the maze of their creation, have had little to say about this.  We are just rats while they are the experts.  Did that all change last week in the U.S. Presidential election?

No one knows the future - but there are a few things we can say.  If our new political leadership takes us vigorously down the path of supply-side reforms; lower taxes and less regulation that puts money in the hands of risk takers eager to make it grow, then history may well look back and judge last week as a key inflection point toward a much-improved U.S. economy.  It is my fervent hope that this will prove to be the case.

Hope, however, is not a strategy.  We owe our clients a thoughtful and robust plan of investment.  To us, this means owning certain investments in a diversified portfolio when we can identify threats to wealth that need to be addressed.  Below we outline two of the biggest risks present in the market today, which can be mitigated through the ownership of higher quality, longer dated bonds.

Serpents in Our Paradise: European Banks and Bond Markets, and China’s Currency

For now, at least, we still live in a highly globalized world. There are pockets of weakness in the global markets that have a voice and have the ability to move our markets. These are potential tail risks that we should monitor. The two areas about which we are the most concerned are European credit and banks, and China.  They have the potential to work against the weakness now enveloping the bond market.

The populist revolution, now clearly sweeping the democratic world, will next hit Europe in just a few days, on December 4th. On that date, Italy will hold a constitutional referendum on a reform package that is widely viewed as a referendum on it’s political leadership.  Another populist uprising against the status quo there would likely lead to the resignation of the prime minister.  One of the most popular parties in Italy, the “5 Star Movement”, wants to call a referendum about voting Italy out of the Eurozone.  It seems likely they may get their chance.

My concern is that the great tragedy of our time may be that Europe’s technocrats built a flawed structure that cannot contain this new trend of populism.  This is in marked contrast to our ability, and that of the UK, to adapt to political change.  The key difference?  We have our own currency.

The chief flaw is the Euro itself, a shared currency without a fiscal union.  This wildly different structure from that of the UK or the US is likely to fail to accommodate the impulse for populist change and end up breaking, not bending. This could lead the populist movement in Europe to drive deflationary, and not inflationary outcomes – not just in Europe but globally.

The key indicator that we should monitor is the premium the market charges Italy, or other EU countries, to borrow in the bond market over the comparable cost for Germany.  These are rising across the board in Europe now, which is a bad sign.  The last time Italy’s bond market broke, in 2011, U.S. government 30 year bonds rallied 40% in price, during the Tea Party-led G.O.P government shutdown and threat to default on our debt. This absolutely shocked those whose vision did not extend to events in Europe.  I believe this could happen again.

Europe risks a repeat of this starting in December and into 2017.  Watch this space.  The reason U.S. investors, particularly bond investors, should care about this is that Italy is the world’s 3rd largest sovereign bond market. Refugee capital seeking a home could spark strong capital flows to support U.S. bond prices to a greater extent than is currently priced into the market. 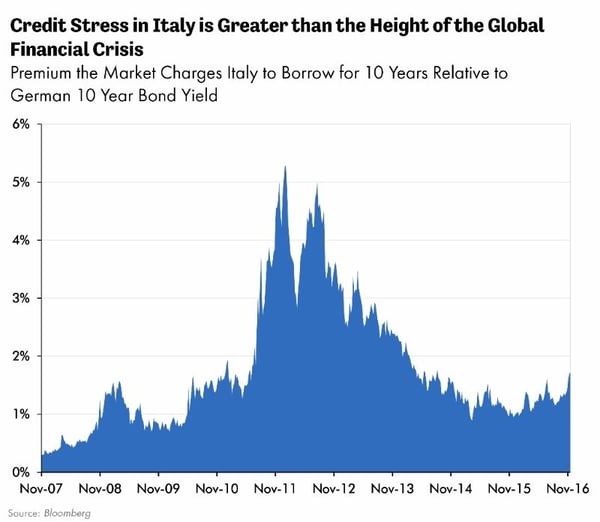 Unintended Consequences of a Much Stronger Dollar

Today, the trade weighted index of the dollar is challenging its 2015 highs.  If it should break above this level, we believe that dollar strength could quickly prove toxic to the rest of the world, especially emerging markets and most of all China.  Such a course of events would suppress U.S. inflation.

There is $13 trillion worth of debt in U.S. dollars that is owed by companies and countries whose currency is not the U.S. dollar.  $3 trillion of this resides in emerging markets.  As the dollar strengthens, the dollar debts of these entities becomes much larger and harder to service.  Of course, should the U.S. restrict access of our trading partners to our markets, it would be harder still for them to earn the dollars that they desperately need to service their debts.

As it stands already, China has bled out almost a trillion dollars of foreign exchange reserves over the last two years to limit the pace of its currency’s decline and stem the pressure from capital flight.  The financial press has twisted this into strident headlines screaming “China Dumps U.S. Treasuries!” but what it really means is that China needs the money to stem its currency’s devaluation.  This is bullish, not bearish, for the U.S. dollar, and for the value of U.S. treasuries.

Why should U.S. investors care about this?  Simple: China is the world’s factory, so the lower the Chinese currency goes, the cheaper its exports become.  As the chart below illustrates, U.S. inflation expectations fall when China’s currency is weakening.  Should China’s currency continue to fall at this pace, or worse yet, fall faster, it’s hard to see how this will not have a bond-friendly impact in the U.S. 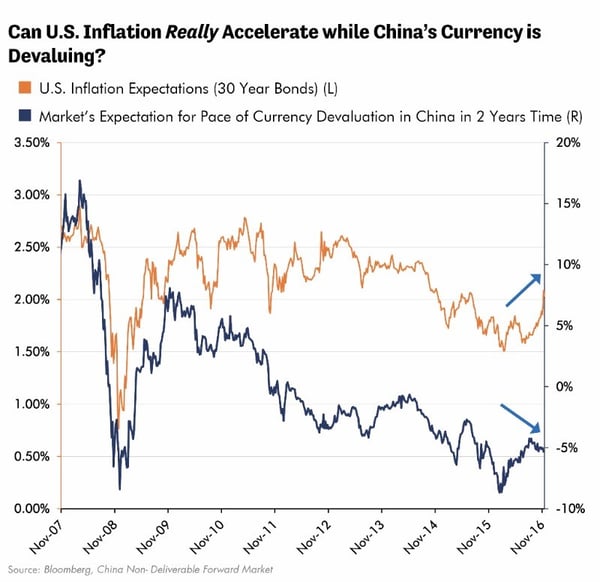 The Chinese curse “may you live in interesting times” has clearly been cast upon today’s investors.

When I think of the highest quality and longest dated bonds, I cannot fail to appreciate these remarkable instruments of counter-cyclical strength during times of equity weakness.  How on earth could we construct a truly diversified portfolio, one that is resilient to recession and slowdown, if all the instruments in it moved in the same direction, at the same time?

With these tools to hedge risk, particularly the risk of a dramatic and unexpected decline in equities, we can go about the rest of our day thoughtfully managing and investing the vast majority of the portfolio that is after all, invested in other things.  We design our portfolios as a whole to be resilient to the threats we believe our investments are most likely to face.

We would end with one final point.  If indeed those who are negative on bonds are right, and that this is in fact the end of the bond market’s long run of success, this would be an event that we should welcome.  This would mean that we had put behind us the terrible scourge of overindebtedness.  We would have completed our deflationary trials and, in the words of Churchill, “the life of the world may move forward into broad, sunlit uplands.”

Such a world would be bountiful for equity investors and for those skilled in investing in such a world, a world I have studied for my entire career.  We would gladly embrace such a change because of the many more tools we would have to profit rather than the more limited choices available to us in the dangerous and tricky world in which we have lived since the financial crisis. Our promise to you is that we will tackle these issues objectively and without passion, always seeking a less risky way forward in a volatile world. •

“The greatness of America lies not in being more enlightened than any other nation, but rather in her ability to repair her faults.”
– Alexis de Tocqueville

“I predict future happiness for Americans, if they can prevent the government from wasting the labors of the people under the pretense of taking care of them.”
―Thomas Jefferson

“Politicians and diapers must be changed often, and for the same reason.”
― Mark Twain

“Nothing is more powerful than an idea whose time has come.”
― Victor Hugo

“Nothing is permanent except change.”
― Heraclitus

“Tho’ much is taken, much abides; and tho’
We are not now that strength which in old days
Moved earth and heaven, that which we are, we are;
One equal temper of heroic hearts,
Made weak by time and fate, but strong in will
To strive, to seek to find, and not to yield.”
― Tennyson “Ulysses”