Bearish to Bullish: Opportunities in Steel

Our bearish outlook on the steel industry in mid-2014 helped us to avoid the huge declines in steel equities, some as high as 85%, that followed in the wake of the inventory cycle downturn that we expected. We believe that we are now entering into the strengthening phase of the steel inventory cycle that should profit investors in select steel equities whose earnings will rise with prices.

Before we outline the investment case for steel, let’s take a few moments to recap how we got here.  These pages last examined the steel cycle in the fall of 2014.  Our conclusions on the outlook for the steel industry at that time were overwhelmingly and categorically bearish.  Why?  Three reasons.

First, prices in the U.S. were far above Chinese prices.  This meant that China, by far the world’s biggest producer, had a profitable incentive to export steel to the U.S.  Second, prices of steel-making raw materials in China were falling, which meant that China could export this steel to the U.S. profitably at even lower prices.  Third, we were nearing the time window during which we could reasonably expect the Kitchin Cycle to peak.

We had first profiled the Kitchin “Inventory” Cycle back in May of 2014 (Making Volatility Our Friend: Trading the Kitchin Cycle). Our long experience in steel had taught us that the shorter-term cycles in steel were driven by changes in inventory.   We expected this cycle was peaking and would fall, driving customers to “destock” inventory by buying less new steel than their demands required.  This change in demand – from additional demand for restocking (adding to) inventory to falling demand from destocking (drawing down from existing) inventory creates an air-pocket in demand often large enough to change the cycle’s direction.

As so often happens in investing, our initial insights proved valid – but with a lag.  In September of that year we revisited the steel sector again, (Unsustainable Steel Premiums), noting our mystification about why steel had not already collapsed.  Within days, steel would (finally) begin a crash that would take prices from their May high of $690/short ton to a low of $350/short ton.  The share prices of the most poorly positioned steel equities in the U.S. would fall 85% or more in the following months.  This was the power of the inventory cycle at work.

That cycle is still at work today, only this time working to the benefit of the U.S. steel industry.  We believe that a profitable window is opening for investors to benefit from improvement in this cycle.  We are investing accordingly.  In today's “Trends and Tail Risks” we explore why we think we are now entering into the restocking phase of the Kitchin Cycle.

Our expectations in steel are for further near-term improvement as we enter the restocking phase of this cycle.  What has changed is the position of the cycle and the weight of the fundamentals, which are now completely opposite from those that prevailed in 2014.  This is the nature of cycles.  We highlight three of these points below.

First, U.S. steel prices are too low relative to the rest of the world, particularly to those in China, the world’s largest producer.  We can say this with confidence because the U.S. market is dependent on a certain level of imports to balance supply with demand.  If we do not receive enough imported steel, then we risk a shortfall in supply.  The market moves to keep this shortfall from occurring by raising U.S. prices to a level at which producers exporting steel to the U.S. receive a profit incentive to do so.

Back in mid-2014, U.S. prices were $150/ton over those in China and presented a sufficient incentive to secure for the U.S. the necessary imports of steel.  Earlier this year, the premium of U.S. prices over Chinese prices exploded to nearly $300/ton, which made the initial lurch higher in U.S. steel prices completely and totally unsustainable.  We had no interest in investing in steel at that time.  This mini-boom quickly died, however, and has now created an opportunity for us.

The rise in Chinese costs, the correction in U.S. prices, and the rise in Chinese steel prices have changed the situation completely.  Today, the premium of our prices is just $18/ton, far too low.  Our prices need to rise relative to prevailing prices outside of the US by at least $100/ton if steel imports are to flow into the U.S.  This is the most important conclusion in the chart below.  Cycles overshoot.  So we should not be surprised if the U.S. price premium rises far above this level. 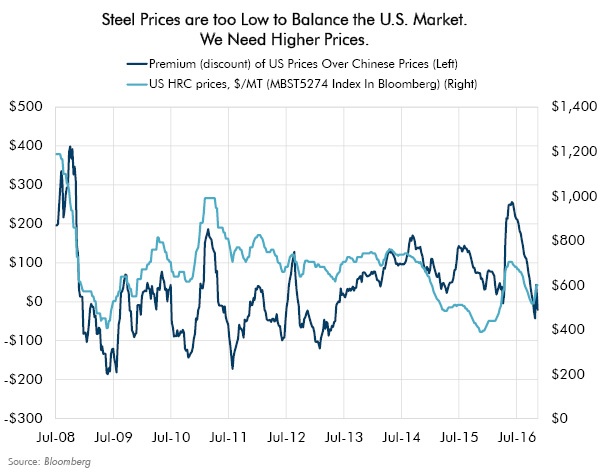 Second, important steel-making raw materials prices in China are now rising.  The chart below illustrates that these costs have doubled in China.  As Chinese production costs rise, the incentive price that Chinese producers must receive in order to profitably export goes higher.

This is the polar opposite of the situation that existed in 2014, when raw material costs were falling in China, which we expected would lead to lower prices globally.  China’s dependence on higher cost iron ore and coking coal, the key ingredients in pig iron, should drag global raw material prices higher, such as in the important scrap steel market.

Scrap steel and pig iron are substitutes since both can be used to make steel.  Steel makers create an arbitrage between these substitutes by purchasing the lowest priced substitute in order to make steel at the lowest possible cost.  This means that the price of one substitute can never diverge for too long from another.  Right now, the price of scrap steel is below that of pig iron and should rise.  Rising input prices should act as a further incentive for steel buyers to “pre-buy” ahead of higher steel prices in the future, leading the urge for inventory accumulation that is the driving force of the Kitchin Cycle’s restocking phase.

Third and finally, unlike this year’s earlier yet unsustainable lurch higher in prices, the foundations for the pricing cycle underway now are well-grounded.  For instance, the chart below demonstrates that profit margins for steel producers in China are much closer to their lows than highs.  This is due to rising raw material costs.  As long as this persists, it should limit any incentive the Chinese may have to overproduce steel and flood the world with their exports.  Again, this is exactly the opposite of the conditions that prevailed in mid-2014, as Chinese steel margins rose because input costs fell. 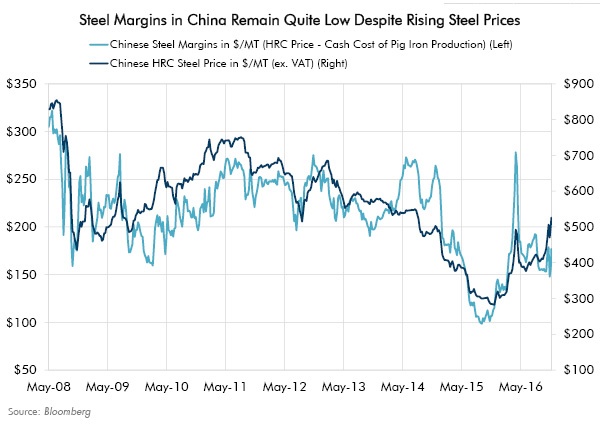 What are the risks?

There are always risks associated with investing in the steel sector.  If our thesis on steel should be proven wrong by future events, what would those events be?

One risk would be a fall in Chinese raw materials prices, or falling steel prices outside of the U.S. that would open up the necessary flow of steel into the U.S. while U.S. steel prices remained muted.  The strengthening dollar, should it accelerate, could cause this in time.  Exporters with weaker currencies could see their cost positions fall in dollar terms, creating a profitable arbitrage incentive to move steel to the U.S. while U.S. prices stagnated and overseas prices fell.

Timing, finally, is always a risk - particularly in steel.  For proof, look no further than our initial four months of frustration between May and September 2014 when the market seemingly paid no attention to the material weakening in fundamentals we had identified.  Our original note in May was less than two weeks after the actual peak in U.S. prices, yet the market’s misguided enthusiasm helped shares to levitate for a seemingly interminable four months.  That was frustrating!

The steel industry has simple drivers.  Steel, like all commodity markets, is driven by the powerful forces of arbitrage and substitution.  The most important thing to understand is the action that the market will take in order to balance demand with supply.  In this case, that means understanding the path by which the U.S. will receive the steel imports it needs.

Cycles act upon these markets in predictable ways and times, particularly the regular pattern of the Kitchin Cycle driving waves of inventory destocking and restocking.  If investors hope to be successful in steel, they must understand the individual forces at work combining to drive steel cycles.  Otherwise, investors risk being paralyzed - or worse yet - mislead by what are, at heart, simple forces.  From time to time, these forces will align to open up higher conviction windows during which investors who understand these forces may profit.  We believe now is such a time. •

“There is a time for everything, and a season for every activity under the heavens.”
- Ecclesiastes 3:1

“No one that encounters prosperity does not also encounter danger.”
- Heraclitus

“If you don’t like the weather…, just wait a few minutes.”
- Mark Twain

“…new cruises were on the start; that one most perilous and long voyage ended, only begins a second; and a second ended, only begins a third, and so on, forever and aye.  Such is the endlessness, yea, the intolerableness of all earthly effort.”
- Herman Melville, Moby-Dick; or, The Whale

“Everything flows.  Nothing stands still.”
- Heraclitus

“Whenever you find yourself on the side of the majority, it is time to pause and reflect.”
- Mark Twain