Searching for Junonias: The Art of Rejection

Chief Conclusion: We agree with Warren Buffett and Charlie Munger that the best ideas are rare.  Our discipline is to seek out the best ideas and hold them, ideally, forever.  Our search for rare shells here on the beaches of southwest Florida can teach us a lot about successful investing.

One morning last week I was walking on the Naples’ beach with my son and found a rare shell, known as a Junonia.  This is the only Junonia I have ever found, despite four and a half years of beachcombing since we moved to Naples.  We can learn a lot about successful investing from my experience seeking out this shell.  Today’s “Trends and Tail Risks” outlines the similarities.

The Junonia, pictured in my hand below, is known as the rarest of all the shells on the beaches of southwest Florida.

Those familiar with shelling may know that finding a Junonia is sufficiently noteworthy to get your picture in the newspaper on Sanibel Island, which is famous for its shells.  But the lore of this rare shell actually stretches back for centuries.

John J. Audubon’s iconic color-plate book “The Birds of America” took fourteen years to finish and was published in 1839.  Audubon was a young Frenchman who fled conscription during the Napoleonic Wars to the young United States in the hopes of founding a successful business.  After a time, his business efforts failed.  He went bankrupt and was thrown into debtors’ prison after the panic of 1819.

Throughout his life, even while tending to business ventures, he never lost his childhood love of the outdoors and wildlife, and especially studying birds.

His passion consumed him and led him away from his family for months at a time, for years pursuing his dream, traveling the country – studying, drawing and painting birds.  After many years in the wilds of a young America, he sailed for England in 1826.  There his drawings and paintings created an overnight sensation.  This enthusiasm funded the creation of his book, which became an instant classic that is still in print today.

Plate number 409 of his book, shown below, of Havell’s and Trudeau’s Terns, featured a Junonia shell at the bottom right.  This seemingly innocuous picture helped spark a firestorm of interest in the shell.  For a time, the Junonia was coveted because of its unsurpassed rarity with only four known and highly valued specimens in the whole of Europe in the early 1800s. 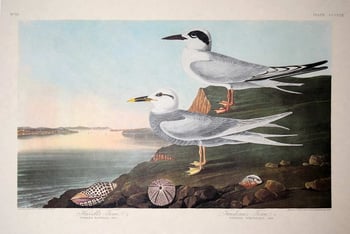 Today, these shells are no longer rare enough to command astronomical prices because shrimp trawlers often dredge them up from the deeper water as by-catch.  The Junonia remains a rare prize, however, for the lucky beachcomber who finds one.

The more I thought about it, the more I came to realize that looking for a Junonia is a lot like investing.  At Wharton, where I earned my MBA in finance, they beat into you the habit of always doing the math.  So I did the math on how much ground I walked to find one Junonia in the four and a half years that I have lived in Naples.  The answer?  Nearly 500 miles, approximately the length of the state of Florida from North to South.

Was it luck?  Determination?  The willingness to put in the time to search?  I thought about all the millions of shells over which my eyes had swept – and in an instant dismissed – because they didn’t suit the exact pattern I sought.  Just like investing.  Lots of no’s - for days, weeks, months, and then years.  And then all at once, recognized instantly at a glance – the prize!

Investing is a lot like that, disciplining your mind to cull through thousands of potential ideas quickly rejecting nearly all of them to concentrate on the few truly special ones.  And it took more than just pattern recognition honed by years of disciplined searching, being in the right place at the right time was a huge help too.

Ironically Hurricane Irma no doubt played a role in creating the opportunity for me.  Junonia shells normally reside far from the beach, in deep water, so the best time for which to search for them is after the most intense storms.  I redoubled my efforts after the hurricane, arriving at the beach at dawn so that I was the first one to walk it, improving my odds.

Perhaps this similarity with investing is the most poignant: that all times are not equally advantageous even to the most avid seeker.  The market, like the ocean, often yields its most prized opportunities only after the most terrible storms have blown through.

Charlie Munger has it right: truly great investing ideas are rare.  Oddly enough, however, the skilled investor with the trained eye may instantly recognize one when he sees it – if he has been looking for it long enough.  That is one of the great paradoxes of investing that we can learn from the Junonia.

Our research team is constantly seeking Junonias in the market.  Like beachcombing, this means that we end up rejecting almost all of the ideas that we analyze.  Often we have patiently watched stocks and their management teams for as long as ten years, watching them navigate multiple cycles, before deciding to invest.  Other times, from among the thousands of ideas through which we have sifted and then rejected do we recognize almost instantly the merits of a new idea.

This kind of thinking is why our portfolio turnover tends to be quite low.  After scouring the Earth for the rare ideas we consider the best, shouldn’t we be reluctant to part with them?  Yet the average mutual fund manager holds an investment for a year or less.  Even a “successful” sale that generates a short-term taxable gain for investors in the highest brackets will cost investors half their gain.

Again, we agree with Charlie Munger that, once selected, our best use of time is “waiting,” patiently holding our selected investments.  This means lower costs from less trading, and – upon a successful sale of an investment – a lower tax burden for clients.   One of the “risks” such a strategy runs is that in the short run, a portfolio managed with this philosophy can have long periods of time when its performance looks nothing like that of “the market.”  If that is the price that we pay for the long term success of our clients, then so be it.  No one said investing was easy.  All we can do is to proceed with discipline, enthusiasm and most of all, patience, one Junonia at a time.

One final observation is that the financial markets, unlike our beach here in Naples, have not experienced a storm in quite a while.  We believe that this long stretch of quiet is unlikely to endure.  We look forward to when the inevitable next big storm blows in its fresh crop of Junonias from the financial deeps.  When it does, our goal is to be the first on the beach at sunrise, looking for opportunity.•

"All truly great thoughts are conceived while walking."
- Nietzsche

"October: This is one of the peculiarly dangerous months to speculate in stocks.  The others are July, January, September, April, November, May, March, June, December, August and February."
- Mark Twain’s “Pudd’nhead Wilson”

"How many insights do you need?  Well, I’d argue that you don’t need many in a lifetime.  If you look at Berkshire Hathaway and all of it’s accumulated billions, the top ten insights account for most of it.  And that’s with a very brilliant man – Warren’s a lot more able than I am and very disciplined – devoting his lifetime to it.  I don’t mean to say that he’s only had ten insights.  I’m just saying that most of the money came from ten insights."
- Charlie Munger (Warren Buffett’s business partner)

"A few major opportunities clearly recognizable as such, will usually come to one who continuously searches and waits."
- Charlie Munger

"Opportunities come infrequently.  When it’s raining gold, reach for a bucket, not a thimble."
- Warren Buffett

"The big money is not in the buying and selling … but in the waiting."
- Charlie Munger

"I could never stay long enough on the shore; the tang of the untainted, fresh, and free sea air was like a cool, quieting thought."
- Helen Keller