Changes in the Rules of the Game

In complex times, it’s important to focus.  From where I sit, it seems that there are two big things going on in global markets right now.  The first is a cyclical downturn of unprecedented speed and ferocity.  The second is related to the first, which is that the odds are rising of a paradigm shift, a rare circumstance that George Soros called “changes in the rules of the game.”  These seem to me to be combining to create a uniquely challenging market, the successful navigation of which will likely call for a uniquely positioned portfolio.  Is your research team worthy of the challenge?  We believe that ours is.  Are your investments ready?  We believe that ours are.

“I was particularly focusing on changes in the rules of the game, not in playing by one particular set of rules but understanding when new rules came into being—and learning that before others did.” – George Soros

If you doubted for a moment that we are in a downturn of unprecedented speed and ferocity, then simply observe the tragic initial unemployment claims here in the United States, where 22 million American souls have been thrust out of the workforce in just the last four weeks.  This is a tremendous human tragedy.  What does it mean for markets?  It means to us, at a minimum, that you had better have a strong risk management discipline and intelligent asset allocation if you hope to safely arrive at the other side of this.  While those may be necessary for success, we don’t think that they are sufficient.  Rather, we think, these markets may demand more.

We have long studied George Soros’ investment career for good reason - his was one of the most successful ever in the history of investing.  But more germane to today, is the way in which he produced his returns.  He focused not on “normal” markets but rather on understanding those rare situations where new rules came into being.  Are we in such a period now?  We believe the answer is yes.  We say this because we are watching the fastest changes in property rights in our lifetime unfold before us.  This has many investment implications, as we explain below.

“In times of war, the laws fall silent.” – Cicero

Cicero knew a few things about navigating uncertain times.  A famous lawyer and Senator in the last days of the Roman Republic, Cicero lived to see the collapse of Roman institutions that he had defended and had stood for centuries.  Ultimately, Cicero misplayed his hand in this epic drama, got on the wrong side of history, and paid for the error with his life.  His vengeful opponents, early in what would become the second Roman Civil War, nailed Cicero’s head and hands to the honored Rostra from which Rome’s leaders had addressed its people for centuries.

Despite his failure to navigate his own times well, Cicero’s quote above still underscores the value of one key principle we wanted to highlight: that in times of crisis, “the laws” can be suspended.  We think exactly that is happening now.  We see this the most clearly in the rapid and wide policy response to the economic and social stresses of the ongoing coronavirus pandemic.

Many state and local governments nationwide are mandating that evictions cease, presumably temporarily, for renters who are unable to pay their landlords.  Other governments are going further and mandating that landlords too may (or may not) forbear on mortgages for which these landlords are liable.  These are indeed desperate times that call for extreme measures, so there is logic to these emergency measures.  But, nonetheless, this is a remarkably swift and potent change in the rules of the game.  One month ago, a major change like this – involving trillions of dollars’ worth of assets, liabilities, and cash flows - would have been unthinkable.  Today, it seems to pass almost unremarked upon.  Such are the times in which we live.  But our research team noticed.  We believe that there are two investment implications, that we outline below.

A Flight to Safety Down Exter’s Inverted Pyramid Prompts a Bull Market in Safety, Rallying Gold and Long Dated US Treasury Bonds

The first investment implication is the useful assets you can own to attempt to hedge the damage of a downcycle, as we  previously wrote about in 2017, which is best described as a flight to safety down John Exter’s “inverted pyramid,” the image of which is shown below. 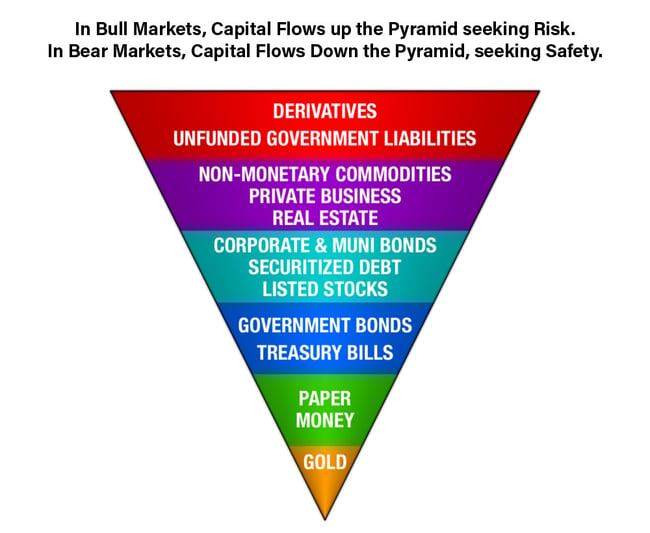 I quote from that piece below at length:

This is important to highlight because it explains the dramatic outperformance of both gold and long dated US treasury bonds.  Many investors seem to have erroneously considered these investments to be opposites.  But that is not how they are trading right now is it?  In fact, the chart below suggests a deeper truth, that they are both valuable complements to hedging the risk of an equity rich portfolio.  Exter’s “inverted pyramid” helps us to understand why this is.

I have for years shared an affinity for gold with many of my investing colleagues whom I have met around the world.  But my framework toward gold has been very different.  I view it as the ultimate “risk free” asset.  Here I mean specifically that gold is an asset that is no one else’s liability.  This is another way of saying that gold has superior property rights and no contingent liabilities.  In my opinion, it’s in many ways the ideal asset to own in a tumultuous world.

If you doubted the merits of an asset with “no liabilities,” just ask a landlord or apartment owner who is now bereft of the income that once – just days ago - made that asset worth owning.  Now we can see a fuller and more bitter truth: that asset was only as good as the ability of the tenant to pay – and as stable as the laws governing the contract between the renter and landlord.  Both are now suspect.

What is that apartment or rental home worth now?  Does anyone really know?  What about the liabilities on that asset for which the landlord must guarantee, like property taxes, insurance and other ongoing costs?  The state has suddenly intervened and changed the rules of the game.  The law has indeed fallen silent.  And this is all within days of the viral outbreak.  Will such intervention stop here?  We doubt it.  We suspect, rather, that like the viral spread of the coronavirus, we may see similar growth in other challenges to traditional property rights. Much hangs upon this.

If – as we believe - this is indeed a crisis of institutions, even the strongest may bend and the weakest may break. This is a key reason our research favors high quality, liquid investments in the developed markets with the strongest institutions.  No doubt many of our institutions may not be as strong as we once thought, but we believe they remain superior when compared to those in increasingly shaky emerging markets.  Especially those with depreciating currencies, rapidly rising costs of living, and large debts in U.S. dollars that are becoming increasingly difficult to pay.  We believe great values may eventually present themselves in these markets after this trying time.

“Everything tends towards catastrophe and collapse.  I am interested, geared up and happy.  Is it not horrible to be made like this?” – Winston Churchill in a letter to his wife Clemmie in the stressful days leading up to the World War

There is no doubt that we are in times of unprecedented stress and change, like the tumultuous times during which Winston Churchill penned the line above to his beloved wife Clemmie.  I have long reflected upon the attitude with which he approached what was surely the greatest crisis in the storied history of Britain. Time Magazine named him the “Man of the Century,” appropriately so in my view, for his achievements against great odds.  I find his example inspiring in these tumultuous times.

Do not such challenging markets as we now face make it painfully clear who knows what they are doing and who is only faking?  A simple glance at your quarterly statements tells you all you need to know, does it not?  Could it be that, in navigating these challenging markets, similar heroes may emerge that triumph for the benefit of those whom they serve?  We can surely hope so.

I have two conclusions.  The first is that, while we may not get the chance to choose the future circumstances that we must face, we can choose the team with which we face that future.  The second, is that I would rather face this uncertainty with a team of experienced professionals that, like Churchill - are not intimidated by dark times but rather are excited about the challenge of triumphing over them.  Who is on your team?  Are you ready?