In today's “Trends and Tail Risks” we outline Joseph Schumpeter’s thesis of “creative destruction” and how it has inspired our research team to comb the markets for investments where we think industry leaders with high returns on capital and stable business models can succeed. The resulting low-growth world in which we are seemingly mired also makes a strong argument, we think, for precious metals and higher quality bonds. Why? Because low growth may depress returns on capital and interest rates for perhaps longer than any of us would care to contemplate, making such investments more valuable.

Joseph Schumpeter was an Austrian economist whose career was bookmarked by World War I and II. He saw it all. He lived through the fall of empires, particularly that of the former Holy Roman Empire (then known as the Austro-Hungarian empire) that collapsed after World War I and was ravaged by both revolution and hyperinflation.

After this harrowing experience, he emigrated to the United States where he joined the faculty at Harvard. You may be familiar with him from previous “Trends & Tail Risks” where he was cited in conjunction with his work on economic cycles. In fact, one of his most famous works was the 1939 two volume set titled “Business Cycles” where he explained the short, medium, and long wave cycles that influence our view of economics and investing. It was his deep study of cycles where we first learned about this great economic thinker, but there was much more to his body of work.

Another interesting area that he delved into was the interplay between economics and politics. His most famous work was published in 1942, during World War II. It was called “Capitalism, Socialism and Democracy.” In it he argued that capitalism would eventually collapse because it would culminate in corporatism, the control of the political process by corporate interests. He feared that this would diminish the vitality and vibrancy so necessary for capitalism to succeed. The wealth generated by capitalism would also enable the ascendancy of a large intellectual class hostile to capitalism which would help usher in its demise. Wow! Hopefully, you will forgive me for thinking that Schumpeter nailed a lot of important issues, far before his time. Reasonable people could argue that this dynamic is unfolding not just in our own country but across many other Western democracies as well.

While there is a lot about Schumpeter’s thinking we could discuss, I wanted to focus today on his concept of “Creative Destruction.” You have probably heard this term before. Now you know where it came from.

The idea is that capitalistic competition drives progress through the destruction of inefficient ways of doing things as they are replaced by better ways. While this process can be painful for certain sectors of the economy, or specific companies with outmoded ways of competing, it is a net positive for the economy. He thought this was the great promise of capitalism – if such creative destruction would be allowed to work its magic. 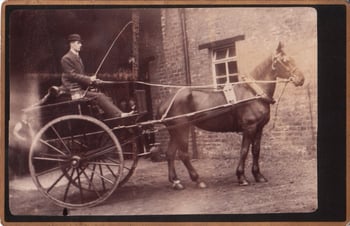 Few mourn the demise of the horse-drawn carriage as the age of the automobile dawns.

In the late 1800’s, horse-drawn carriages were the most common form of transportation. The age of the automobile, though rapidly approaching, had not yet arrived. Whole factories were peopled with employees dutifully making “buggy whips,” the goad used on horses to urge them ahead and power the carriage forward.

The rise of the automobile meant the demise of that form of transportation, and all the capital employed enabling it. This was a bad thing – for that industry – although arguably a net positive for a world introduced to the wonder of the automobile, the horseless-carriage as it was then known.

Buggy whip companies went down into the dustbin of capitalism, as perhaps the world’s most obvious example of a sector made obsolete by creative destruction. This was just capitalism working its magic. But this concept extends beyond industry to government too, in our opinion. Let me explain what I mean.

One of the benefits of the states and local governments within our United States of America is the very multiplicity and diversity of taxing and regulatory authorities, each of which in some way is experimenting in its own process of creative destruction. Some have created high-tax, high-regulation regimes while others, like the Florida that we have called home for the last seven years, pride themselves on the converse: lower taxes and less regulation. Americans are free still – at least for now – to move about the country and pick the regime that makes the most sense to them. So, we would argue that this same creative destruction principle is at work in government too. Many people and business owners are voting with their feet and choosing to relocate for such reasons. Though underway for a long time, I would argue that the rise of the Covid-19 Pandemic is accelerating these trends.

There are many examples of industries purged by creative destruction. Just think of all the changes in commerce, banking, entertainment, and media – such as news – and how different these industries are today than say, before the rise of the Internet, which only blossomed about 25 years ago. Twenty-five years is roughly one generation. That is not thought of historically as a very long time in the grand sweep of history. However, we believe that the Covid-19 pandemic has accelerated certain changes that were, perhaps already underway, and accelerated them to warp speed. This is putting “destructive” pressure on some areas of the economy and some forms of state and local government.

In commerce, traditional “bricks and mortar” retailing has been under pressure for a long time. On-line shopping has been taking market share for many years. Once towering retail giants are now near bankruptcy. Retail real estate has been declining in value in most places. What will this mean for the future of companies such as Real Estate Investment Trusts (REITs) that own these properties? Some of the pictures from downtown New York and other major cities are downright harrowing, with empty streets and boarded up shops, such as in the image below. 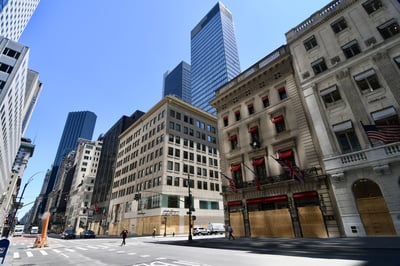 However, the nation-wide lockdowns thrust us forward into an on-line shopping world far more quickly than the pace at which this change was taking place. How many of us are now getting much more comfortable with home delivery from many companies? Even some that were relatively unknown before the crisis? Do any of us doubt that the forces of creative destruction are raging here?

The same might be said for working from home – for those of us who can. The Internet and high-speed connections have made the home office a very viable solution to many workers who were once bound to an office. New software enables virtual meetings, screen sharing, and other collaborative communication that arguably now rivals the office setting. Who knows? Perhaps the cost and productivity savings from no more lengthy commutes and expensive offices will encourage companies to continue or even expand this model? Certainly, Covid-19 has accelerated this trend to another level.   Managers who were reluctant to embrace the trend were forced to. Now, some are more fully adopting it and thus forcing destruction on negatively impacted sectors at a faster pace.

Turning back to government for a moment, consider what Covid-19’s creative destruction could do. Certainly, the fiscal soundness of many states and municipalities were under pressure pre-Covid-19. Now, matters are worse. We believe the poor choices and high costs quietly eating away at state and local governments are getting more powerful. Again, the forces of creative destruction may be at work as more creative and competitive jurisdictions innovate to attract businesses and residents by keeping taxes low or other competitive means. Can any of us doubt that Covid-19 will accelerate this trend? Many once “safe” state and local governments are now at risk of either cutting back services or raising taxes materially, perhaps awkwardly so right at the same time that more of their residents can choose to leave, since these workers have discovered their jobs can be done from anywhere.

Although we unquestionably understand the urgency of mitigating the bad impacts of the Covid-19 Crisis we are all facing, we must acknowledge our fear that an unintended consequence of today’s actions is leading to more “zombie companies” that should have continued to slowly be swept away by the changes above but are now being kept on life support, limping along thanks to ultra-low interest rates and other government support. We do believe that weakening the pace of creative destruction weakens capitalism, to the detriment of all, eventually. Schumpeter feared this would happen, that capitalism’s success could create this risk. Perhaps that day is now here? Certainly, it seems that every succeeding recession in our experience drives a more intrusive public sector that erodes capitalism and moves more toward socialism.

In the examples above, Schumpeter’s “creative destruction” was good for the economy as a whole. However, Schumpeter never lost his fear that capitalism’s flaw was that it empowered its institutions too much, and that could lead to forces that would halt creative destruction. Are we seeing this today? Certainly, reasonable people could argue that ubiquitous bailouts, endless state handouts, and other entrenched political and economic forces are clamoring for things not to change. Is this why interest rates are so low? Is this why growth has disappointed for so long? We think the answer may be yes, which is why we are concentrating our investments in businesses and state and local governments that we think are more durable. For stocks, this means focusing more on companies with higher returns on capital, that can succeed even when growth itself is low. Precious metals, of course, are another area that can thrive as interest rates fall – especially once adjusted for inflation. These are just a few of the ways that our investment team is trying to construct a profitable way forward in these uncertain markets. If we are able to do so, we will be able to thank our study of the works of Schumpeter and his insights into the power of creative destruction.