Dipping a Toe into the Emerging Market Waters

Since 2012, investors owning the S&P 500 have seen their money grow eight times faster than the return of the MSCI Emerging Market Index.  Investors unfortunate enough to lug around these lagging emerging markets have paid a heavy price and fallen far short of U.S. market returns.  Their loss may now be our gain.  Why?  Because this sustained underperformance has created pockets of undervaluation for disciplined investors.  For our navigational guide to investing, we have always relied upon our valuation discipline.  Value is taking us, for the first time in a long time, to find such opportunities in emerging markets, a sector we have long shunned.  This is a meaningful change for us, so I thought we should talk about it.

“[A cynic is] a man who knows the price of everything, and the value of nothing.” – Oscar Wilde

In investing, there is a big difference between “cheap” and “cheap for a reason.”  Sadly, we believe this proved to be a painful mistake from which many long-suffering emerging market investors have yet to recover since 2012.  But it didn’t have to be that way.

Cheap stocks in emerging markets developed the nasty habit of becoming cheaper, understandably so it seemed to us, because the tide – as we explain below- was going out against them.  Our investing mantra is never to fight an outgoing tide but rather to await its turn.  We think now that tide has turned.   We are ready to invest more aggressively in emerging markets.

When the gold price peaked in late 2011 and began what proved to be a 40% decline, we believe it was a clear reflexive signal that the decade-long party in emerging markets was over.   This trend change in gold kicked off a trend change as emerging market currencies declined versus a rallying dollar and rising U.S. real interest rates. 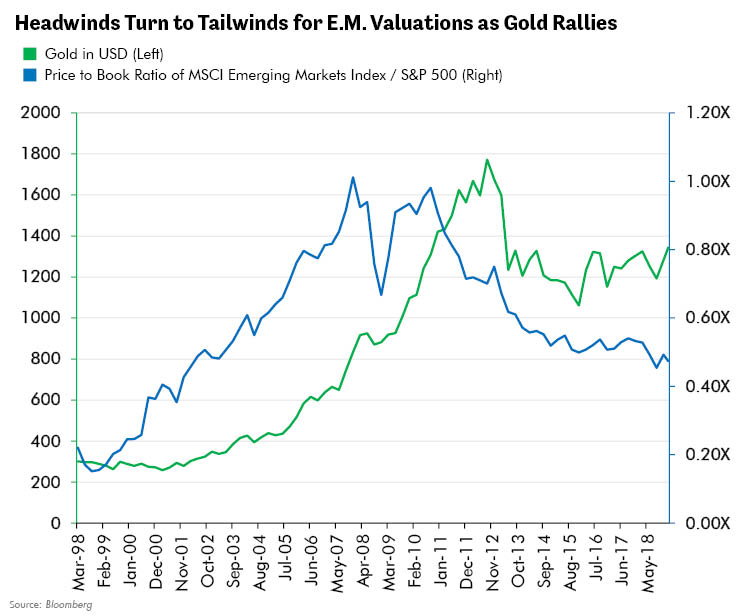 This toxic combination reversed once abundant capital inflows to outflows, which caused a series of unfortunate events from which many emerging markets have still not recovered.  At the same time, U.S. markets had one of the best runs of outperformance ever.  These are two sides of the same coin.  However, the wild success of U.S. markets compared to those in emerging markets is starting to create problems for U.S. investors in the form of lofty valuations.

We are now very near the historic peak of cycle valuations for many U.S. equities.  The chart below, from Smithers & Co. in the U.K., suggests that U.S. equities’ breath-taking rally has created a potential problem: high valuation.  On the measures below, valuations now rival the premium prices which prevailed in 1929 and again near the peak of the Internet Bubble in 2000.

Rising valuations were a tailwind to performance on the way up but could be a headwind on the way down.  Rather than just cross our fingers and hope, we believe it is prudent as fiduciaries to create a diversified portfolio that can be more resilient than “the market” when the next downcycle inevitably springs forth.  If we are going to achieve that goal, however, we need a portfolio that doesn’t look like the market. 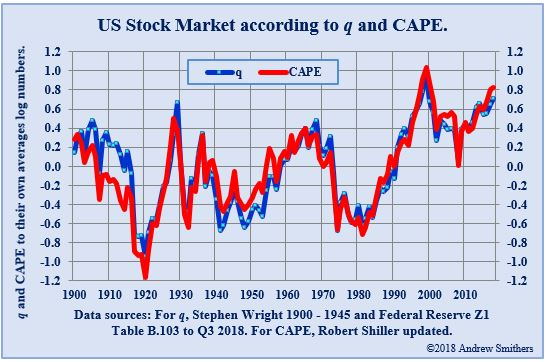 That’s where select investments in emerging markets come in, that our valuation work has uncovered.  However, please understand that our views are in sharp contrast to those who create once what they think is an optimal portfolio, then “set it and forget it.”  Their models told them back in 2012 that emerging markets should be in the portfolio and so they were.  This was a wasted opportunity in our view.  We believe that, through rising gold prices, the tide is changing.  Accordingly, we are changing to take advantage of the values we have identified.

Valuation is our Trusted Tool to Navigate Uncertain Global Markets

The valuation methodologies that we choose to favor vary by the nature of the opportunity that we are investigating.  For instance, we might use a discounted cash flow technique for a steady growth company, while preferring replacement cost analysis for a cyclical, asset rich company.  But whatever method we choose, valuation is the discipline that attempts to arrive at an objective assessment of the investment’s future, which may be distinct and separate from the story or hype that may surround it.

Certainly, it has been our experience as value investors, that undervalued securities almost always begin their outperformance from the depths of despair, which indicates a general lack of enthusiasm toward the company’s prospects.  If successful, these securities can eventually find themselves wildly overvalued as confidence in their prospects becomes universal.  This transition can be uniquely rewarding for the value investor who was present at the bottom.  However, once such shares approach the peak, they can become highly problematic for the investor who overstays his welcome.  Why?  Because oftentimes when the “story” is the most compelling, the valuation is the most dangerous.

Emerging markets remain valued near their lows on bad news.  U.S. equities are near their highs on great news.  A valuation discipline will naturally lead us to begin to favor cheaper investments overseas, especially now that rising gold prices suggest that the tide has turned favorable for them once again.

“The sea is dangerous and its storms terrible, but these obstacles have never been sufficient reason to remain ashore... Unlike the mediocre, intrepid spirits seek victory over those things that seem impossible... It is with an iron will that they embark on the most daring of all endeavors... to meet the shadowy future without fear and conquer the unknown.” ― Ferdinand Magellan

Recent history has been kind to U.S. centric investors.  We have agreed with and benefited from this bias for years as we chose to avoid emerging markets.  During this time, cheap stocks in emerging markets got cheaper.  But as long as the tide was going out, we were not tempted to participate aggressively.  Rising gold prices have changed that.  Now the tide is coming in and therefore the valuation disparities that we are seeing between our home market and those overseas are actionable.

We believe that the most profitable way to invest is the marriage of objective cyclical analysis with a disciplined approach to valuation.  I like our odds in what we think is the new cycle unfolding in today’s markets.

Sources: US Stock Market according to q and CAPE., http://www.smithers.co.uk