I drew two conclusions from my re-reading of Homer’s classic “Iliad” during my family’s annual vacation to the mountains.  First, the importance of spending our time, our most precious resource, on that which truly matters.  Second, that timeless epics such as the story of the battle for Troy have endured because human nature doesn’t change: ego, pride, and impulsiveness continue to plague humanity despite 3,000 years of material progress. Today’s markets, deep into one of their longest bull runs ever, may place the same challenges before us.  We believe that now more than ever we should focus on the long-term, on that which endures.

“…staying power, the greatest gift of all.”

As I was putting together my vacation reading list a few weeks back, I ensured that many classics made the list.  And here I mean real physical books, not the cold electronic Kindle version.  Thankfully my list included Homer’s “Iliad,” – the epic story of the battle for Troy.  Despite the passage of nearly 3,000 years, this amazing book has much to offer.  Especially the Fitzgerald translation.  Do yourself a favor and read it today.

It had been years since I read it last.  I had long been intrigued by Napoleon’s supposed great love for this book, his favorite among the thousand books that earned their way into his traveling library and later in his exile on the ocean rock of St. Helena.  Nassim Taleb’s observation on the book’s staying power recently renewed my interest.  So, it was with much enthusiasm that I opened its pages in the cool setting of our recent annual family vacation to the mountains (pictured below), a welcome respite from a long, hot and humid summer in Naples. 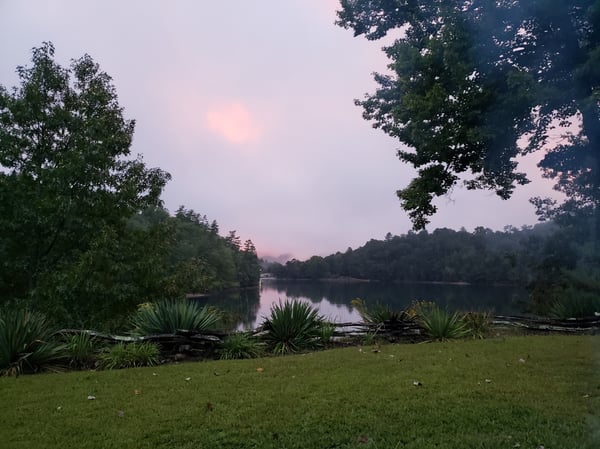 The story takes place in the dim light of the Bronze Age.  The recent innovation of iron arrowheads is cutting edge wartime technology.  How much has changed since then!  Keep reading, however, and you see how little the human species has changed.  Of all the lessons this book offers, none is greater than its display of human foibles and frailty.

Perhaps the best example is that of Akhilleus, the fearsome Greek hero, who sits out much of the conflict because of an insult from the leader of the Greek forces.  Akhilleus’ startling talents are wasted while much of the battle rages, hurting his allies and those whom he holds most dear.  Paris, who began the war by stealing the beautiful Helen, wife of his host Menelaus; slouches through the story a burden to his people and to his brother Hektor, the chief defender of Troy.  Everywhere you look it’s a story of human tragedy, of greatness undone by human failing, and yet also of heroic achievement.  The Fitzgerald translation lays out the beauty of Homer’s epic, from which I quote liberally below:

“Panic that attends blood-chilling Rout now ruled the Akhaians.  All their finest men were shaken by this fear, in bitter throes, as when a shifting gale blows up over the cold fish-breeding sea, north wind and west wind wailing out of Thrace in squall on squall…”

“No plan, no cleverness can serve us now but this: to close with them and fight with all we have.  Better to win life or to lose it fighting now, once and for all, than to be bled to death by slow degrees in grinding war against these ships, by lesser men than we.”

“Thou too, Akhilleus, face iron destiny, godlike as thou art, to die under the wall of highborn Trojans.”

I think the most beautiful language and emotion of the book is when King Priam of Troy enters the Akhaian camp to face Akhilleus, the killer of Priam’s son Hektor, to ask for Hektor’s body.

“Priam, the great king of Troy, passed by the others, knelt down, took in his arms Akhilleus’ knees, and kissed the hands of wrath that killed his sons…Remember your own father [Priam says], Akhilleus, in your godlike youth; his years like mine are many, and he stands upon the fearful doorstep of old age.  He, too, is hard pressed, it may be, by those around him, there being no one able to defend him from bane of war and ruin…Think me more pitiful by far, since I have brought myself to do what no man else has done before – to lift to my lips the hand of one who killed my son.”

“Then both were overborne as they remembered: the old king huddled at Akhilleus’ feet wept, and wept for Hektor, killer of men, while great Akhilleus wept for his own father as for Patroklos once again, and sobbing filled the room.”

“[Akhilleus to Priam} Ah sad and old!  Trouble and pain you’ve borne, and bear, aplenty.  Only a great will could have brought you here among the Akhaian ships, and here alone before the eyes of one who stripped your sons, your many sons, in battle.  Iron must be the heart within you.”

The great investment thinker and philosopher of risk, Nassim Taleb, has said that “The only article Lady Fortuna has no control over is your behavior.”  In today’s markets, so dominated by short term thinking and ruinous emotion, a long-term focus can be a great competitive advantage.  But to be a hero on today’s investment battlefield, we think it’s best to avoid the same human failings about which Homer wrote nearly 3,000 years ago.

Technology may have changed unrecognizably in the 3,000 years since the “Iliad,” but human emotions, such as greed and fear, have not.   We think it’s important for investment success, and indeed all forms of success, to resist the very human emotions that have continued to plague humanity.

Our belief is that anything that unbalances our rational thought and long-term focus is a distraction from the business of investing.  We believe that, if we can but focus on that which endures, we can gain an advantage in an ever more short-term and distracted world.

I believe one key step toward achieving this goal, is to feed our minds with the most valuable material.  Ask yourself: how much of the reading material that you consume every day will be relevant years from now, much less 3,000 years from now as Homer’s “Iliad” has proven to be?  I think we can all benefit from a return to the classics, and classically inspired thinking that has proven its merit for thousands of years.  We have only so much time, its up to us to spend it well.  We think Homer would agree.