Identifying a Classic Gone With the Wind

Recognizing a classic investment may be one of the most difficult – and rewarding - challenges in the world of investing.  In our opinion, to successfully do so, first you must understand the qualities that will help the business endure and prosper.  Then, once identified, you must not get shaken out of it.  This takes unbelievable patience, but as we explain below, one without the other isn’t enough.  Both are required.

“It’s not supposed to be easy.  Anyone who thinks it’s easy is stupid.” – Charlie Munger on successful investing

The other night, my family and I watched “Gone with the Wind.”  What a classic!  My oldest son, who shares my deep passion for history, is especially enamored with that movie.   And who could blame him?  Even more than eighty years after it was released it remains a remarkable picture.  The characters are lively, the action compelling, and the drama every bit as powerful as when it was first captured in the book of the same name written by Margaret Mitchell in 1936. 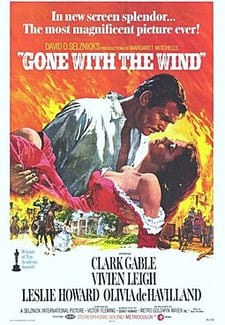 The movie was also a legendary commercial success.  “Gone with the Wind” remains, adjusted for inflation, the highest grossing movie of all time.  There were some who saw this bright promise immediately.  For instance, it won eight of the thirteen Academy Award nominations it received.  But the praise was not universal.  Its leading actor Clark Gable failed to win an Oscar for best actor, Robert Donat would win that for “Goodbye, Mr. Chips,” nor did the movie win the award for best story, which was won by “Mr. Smith Goes to Washington.”  What I find even more interesting is the “experts” at the New York Film Critics Award, who get paid to know better, snubbed the movie altogether and gave the best picture honor to “Wuthering Heights.”   With all due respect to the screen adaptation of Emily Bronte’s powerful work, how could these experts miss the enduring strengths of “Gone with the Wind” that have made it such a money-making classic for generations?

As with so many observations in life, this prompted me to think of investment implications.  If it is hard for “the experts” to recognize an enduring classic with the staying power of “Gone with the Wind,” how much harder is it for investors to recognize today’s classic investments in the stock market?  Think about it for a moment.

What has it meant for those insightful enough years ago to identify that a young Warren Buffett way out in Omaha was doing great things at Berkshire Hathaway?  Or that Steve Jobs was really onto something at Apple?  Even a small amount of money invested in either of these stocks at the proper time, held patiently, would grow to be an unbelievable fortune.  Surely, for those fortunate few who did so early enough, these were probably life-changing investment decisions.

“The big money is not in the buying and the selling, but in the waiting.” – Charlie Munger

There is a catch, however.  How hard is it to truly identify, in real time, such investment classics that are destined for generations of success?  And even if an investor is fortunate enough to identify these rare situations, can those investors really display the patience required to hold onto them for years?  Can such investors hold them through volatile setbacks, periodic disappointments, and a decade or more stagnating as “dead money?”

These questions are not academic but rather they go right to the heart of why successful investing is such a challenge.  For instance, even the fabled Berkshire Hathaway fell more than 50% from 1998 to 2000 while the stock market roared, as the chart below displays. 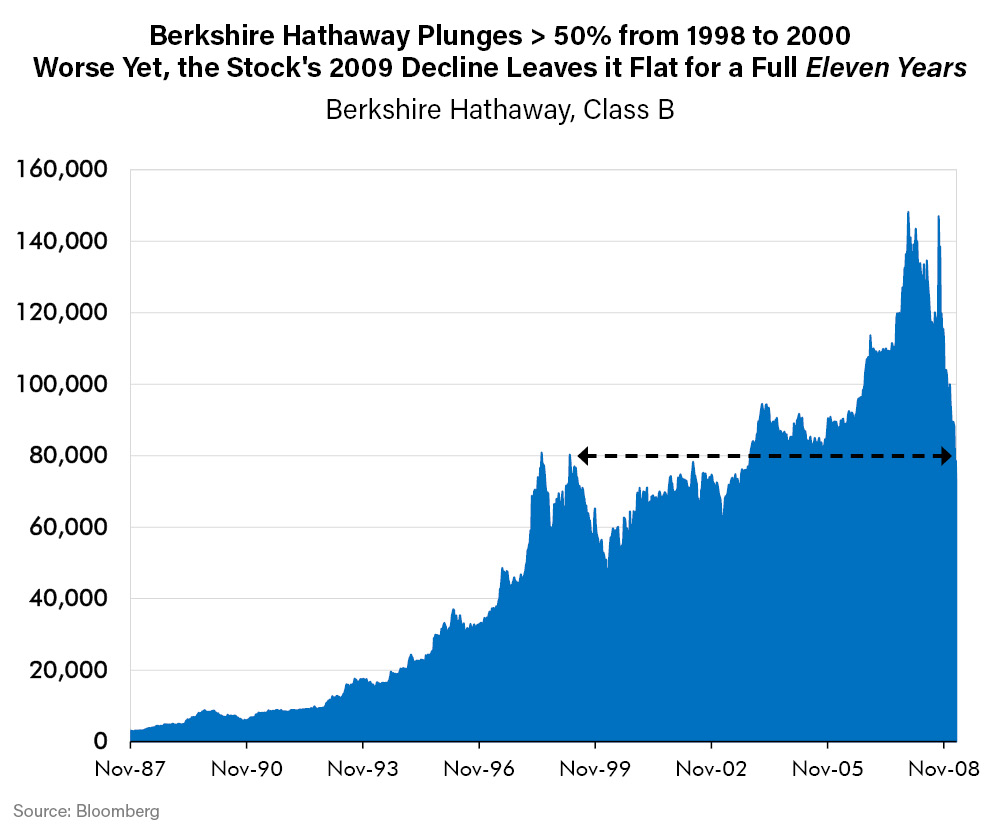 The above 2009 decline in Berkshire took it so low that at one point those who had patiently owned the stock, one of the best long-term investments of all time, had not made one thin dime out of their investment even after eleven years.  Eleven years is not a short period of time to risk capital in the market for no return.  In one of the best stocks ever.  Think about that.  This is certainly a powerful example of the incredible demands that true patience imposes upon investors.  But wait, it gets worse!

Everyone knows of Apple’s success - now.  Its market capitalization of more than $1 trillion makes it the largest publicly traded stock in the United States, and one of the most successful investments in modern history.  However, would you believe that an investor who bought Apple in 1983 would still see the stock at the same price twenty years later in 2003?  Unchanged!  Over two full decades!  Ask yourself, truly now, could you have held onto a “dead money” stock for a full two decades? 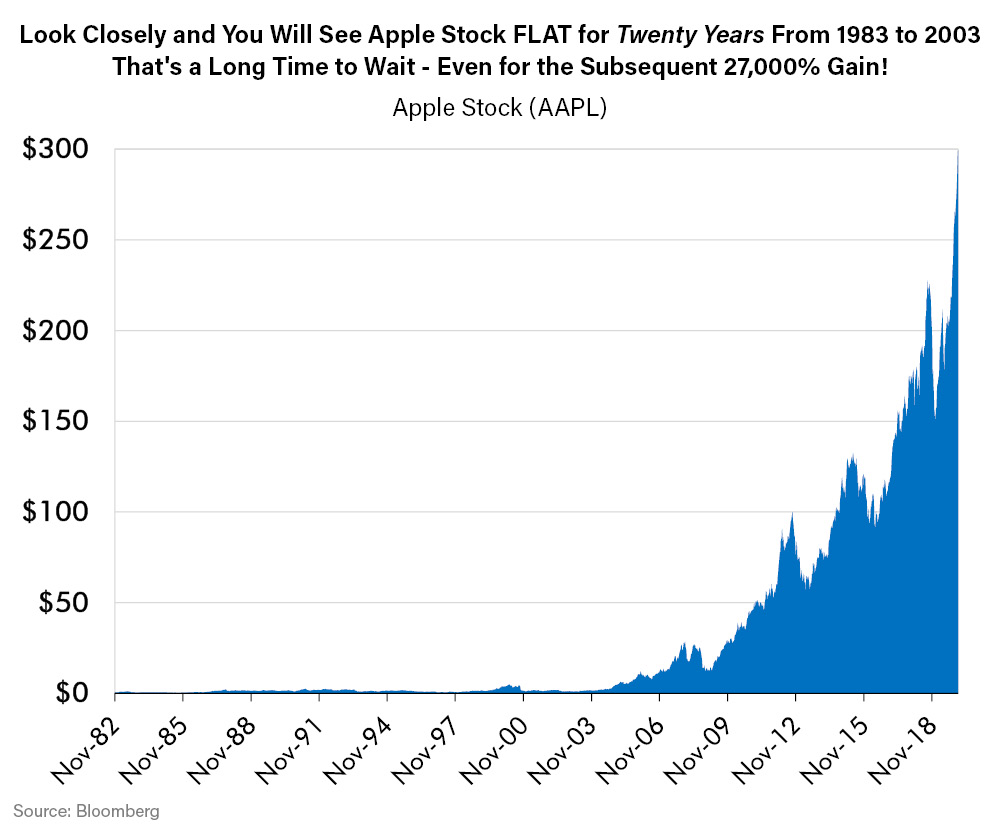 The stock’s meteoric rise would not kick off in earnest until 2003, as shown above. The stock’s sustained run and subsequent 27,000% return (40% per year compound annual growth) was worth waiting for.  The patient holder who never lost conviction was rewarded from 1983 to today with a 19.4% compound annual return, a tremendous return.  These are just two real world examples.  We believe there are surely many more.

I think often about the quote above from Warren Buffett.  It has been repeated often enough to become trite and stale amongst the canon of value investors who we admire and hope one day to be included amongst.  But seen through the light of the examples above, is it really?  I have concluded that when he says forever, he seriously means forever.  That requires incredible patience.

Certainly, waiting twenty years for Apple to work would have seemed like forever.  This strikes me as a powerful reminder to change your habits - if you hover over your portfolio every day.  You probably should turn off CNBC too while you are at it.  Would indulging either habit have helped you identify and remain patient enough to profit from your insight, in the two examples I note above?  I would submit that the answer is no.  One of my favorite investment sayings is that “activity does not equal progress.”  Now you know why I think that.

I always marvel at how tough it is to invest well.  Just think of everything that you must get right to do so.  I suppose this is both the great allure of investing, and why it’s so humbling an endeavor.  And, in my experience, results run in streaks.  Often for seemingly no clear reason.

Great years where nothing seems to go wrong can be followed by bad years where nothing seems to go right.  But when that happens and your results falter, did you just suddenly get stupider?  I don’t think so.  In the short run, I believe that’s just the luck of the draw.  And this is the chief reason we do not obsess about short run performance.  For the true investment classics, over the long run, the wait was worth it.

The next generation of investment classics is out there, right now, trading in the markets.  Our research team is constantly looking for them.  My own belief is that we have already found a few, but only time will tell for sure.  But one thing that I strongly believe, is that finding them is literally only half the battle.   Is your patience equal to the challenge?  Are you prepared to hold for years?  A decade?  Two decades?  Sometimes, such as in the examples above, that’s what it takes.