The biggest mistake we see investors make in the markets, repeatedly, is to assume that tomorrow will look like today. Our experience investing over nearly twenty years and trading hundreds of cycles during this time is that markets change! Because markets change, risk changes, and investments too must change. It’s important to never stop asking questions, to keep a fresh perspective and to always question your assumptions. In our experience, what hurts you is not the failure of the trade that you had on, the trade that gets you is the trade you had on that you didn’t know you had on.

“Imagination is everything.” - Albert Einstein

You would have a lot of company if you thought that the Founder and CEO of the world’s largest asset management company had the best insight into the future of the markets.  But you would be wrong.

In my experience, markets seem to function as if they existed to thwart everyone’s expectations, especially those of “the experts.”  So, the lesson I have learned is never trust the experts!  Accordingly, my thoughts returned to comments made more than four years ago by Larry Fink, the founder and CEO of Blackrock, the world’s largest asset manager with $6.5 trillion (trillion with a T) in assets under management.  Mr. Fink is a titan of finance and is by no means a dumb person.  So, when he came out and said that art and real estate were the “new gold,” it got people’s attention.  He got mine too, but probably not in the way he intended.

“Gold has lost its luster and there’s other mechanisms in which you can store wealth that are inflation-adjusted.  The two greatest stores of wealth internationally today is [sic] contemporary art … and I don’t mean that as a joke, I mean that as a serious asset class and two, the other store of wealth today is apartments in Manhattan, apartments in Vancouver, in London.” – Larry Fink

Let me be very clear.  Investing is a humbling business.  It’s easy to make mistakes.  I have certainly made more than my fair share.  We don’t want to make the same money twice.  We want to make it once and keep it!  We believe the best way to accomplish this goal, as we outlined back in 2015, is to think creatively:

So, while I understood Mr. Fink’s thinking at that time, my fear then was that it was very backward looking.  After all, gold was down 33% from its peak more than four years prior.  An index of art prices, tallied by the Knight Frank Luxury Investment Index, was up 61% over that time.  London real estate prices had rallied 45% in the same span.  In my view, what Mr. Fink was really commenting upon, was not what would happen, but rather what had already happened.

Think of just a few of the ways in which the world has changed since then: 1.) the election of populist Donald Trump to the White House, 2.) the ongoing chaos of Brexit, the exit of Britain from the European Union, and 3.) the first stages of an unfolding trade war between the U.S. and China.  I don’t know anyone who predicted any one of these events in 2015, let alone all of them.  Yet again, the markets conspired to make fools of the experts.

Just look at art, where the biggest markets are the U.S. at 35%, China at 33%, and the U.K. at 16%, according to ArtTactic’s 2019 Art Market Outlook.  Each of these markets has seen its political, regulatory, and economic landscape change profoundly since then.

Perhaps the most forward-looking indicator for the art market may be the share price of the stock most highly leveraged to art: the auction house of Sotheby’s (BID) shown below.  It’s share price is down 11% since Mr. Fink’s comments.  To me, this suggests that the market has lost faith in art’s durability

Trophy real estate in London, named by Mr. Fink as superior to gold, has fallen apart according to a Knight Frank index of central London real estate prices, down 13% since 2015.  Furthermore, this decline is now the longest such period in modern history, four times longer than the downturn following the Global Financial Crisis and more than 30% longer than the epic price cash of the downturn that began in 1989.  The Brexit-driven potential loss of London’s pre-eminence in European finance, and higher taxes, have cooled this market.  Volumes have collapsed even more, falling nearly 50% according to the Land Registry as of May 2019.

New York real estate, another iconic investment according to Mr. Fink, is languishing, thanks to the reduction in deductible mortgage interest and elimination of the deductibility of state and local taxes. Vancouver has been no safe haven either, with real estate activity down more than 50% and unsold inventories nearly tripling since 2015 according to the Real Estate Board of Vancouver.

And gold, the barbarous relic panned by Mr. Fink?  Gold has rallied 7 percent. 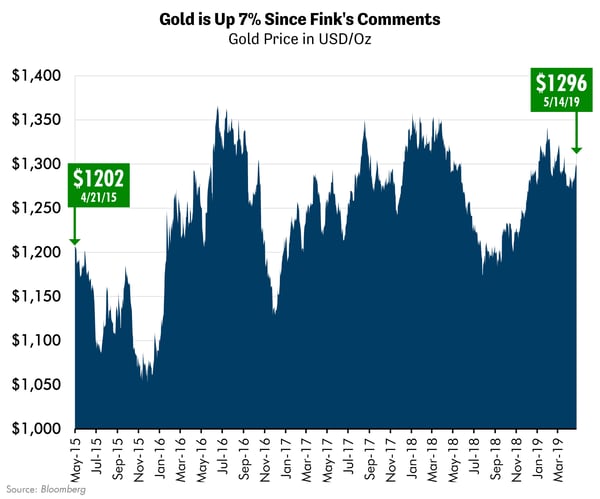 Gold has a long history of wealth preservation and, we believe, offers useful diversification to equity heavy investors.  Rather than repeat here our many arguments for gold’s hedge value, we are happy to make them available to you in a white paper.  Just shoot me an email here if you are interested in our thinking and what we think is the best way to get exposure to gold.

In my view, Mr. Fink made two fundamental errors in 2015.  First, he straight-lined the known past into an unknown future.  Second, he missed WHY investors need hedges.  Who needs a wealth preservation hedge against continued “awesomeness!?”  People need wealth preservation hedges for challenging times and unexpected outcomes.  That’s why they are called “hedges.”

I believe his alternatives for gold were not really hedges at all but rather simply other leveraged ways to play the existing trend of a seemingly unstoppable bull market in globalization. Seventy years of increasing globalization since 1945!  Like a fish that didn’t realize it needed water to breathe, many such investors didn’t know what they didn’t know - until it was too late.  This represents a fundamental failure in risk management.

I don’t think its possible to contemplate in advance the end of something you can’t even identify.  And if you couldn’t identify that something was even capable of ending, then how could you possibly know that it was even a risk that you needed to hedge!?  Perhaps the common driver was globalization itself, which made possible the rise of the mobile class of “globalists,” who owned that art in their London flats and New York apartments?

I would end this note by reiterating a saying I truly crystalized only after learning many difficult  investing lessons.  We think about it every day in our risk management process: what hurts you is not the failure of the trade that you had on, the trade that gets you is the trade you had on that you didn’t know you had on.