Some observers have learned the wrong lesson from the “non-inflationary” impact of central banks’ trillions of dollars in quantitative easing (QE).  In particular, proponents of Modern Monetary Theory (MMT), build on the limited inflationary consequences from activist central bankers to push what we believe is a problematic agenda.  They want to grow even further the role that these banks play.  If they get their way, I don’t think they will like the more inflationary outcome they may see.   A troublesome political future may make it happen anyway, with powerful consequences.  At present we think the balance of risks is for domestic inflation to remain low due to the United States being the safest place for capital to find shelter in a stormy world.  Furthermore, the political changes we note above have yet to occur.  However, our commitment is to monitor events carefully.

“Those who cannot learn from history are doomed to repeat it.” – George Santayana 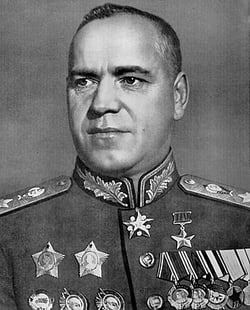 My goal is to make the best decisions I can.  So, I study history to try to learn from it.  But to really do so effectively, you can’t just study history, you must learn the right lesson.  Learning the wrong lesson can have costly consequences, as I learned upon  a re-read of the memoirs of Georgy Zhukov, “Marshal of Victory.”

Marshal Zhukov was one of the most important generals of the Twentieth Century.  He led the planning and fighting of the Soviets against their German invaders in World War II, or as many Russians refer to it, “The Great Patriotic War.”  His memoirs make for interesting reading for those seeking to understand the tactics and strategy the Soviets used to defeat the German invaders.

Hitler’s Germany attacked the Soviet Union in the summer of 1941, ominously beginning the campaign on literally the same ill-starred date in June when Napoleon launched his ultimately doomed invasion of Russia more than a hundred years before.  Clearly, the Germans were confident, erroneously so, of a different outcome than that suffered by Napoleon’s Grand Army.

I can understand why German military leadership believed that they would be successful.  After all, just look at its stunning success early in the war.  The German war machine had seemingly perfected the art of “lightning warfare” (Blitzkrieg) through the crushing defeats of its foes in Western Europe.  Expecting a similar outcome to the East, the Nazi war machine swept into the Soviet Union and – for a while – seemingly passed from success to success.  But a darker future awaited this fearsome fighting force.

Hitler’s generals would fall short of their goals at the very gates of the major cities of Leningrad, Moscow, and - most famously - Stalingrad.  A long series of German defeats began with the Soviet’s successful defense of Moscow, the decisive battle of Stalingrad, and the world’s largest tank battle at the Kursk Bulge.  The German defeats would not stop until the Soviets entered Berlin in 1945, illustrated poignantly in the iconic image below.  Hitler’s dream of the Thousand Year Reich was replaced by the reality of death by his own hand, in the ruins of a shattered and conquered Berlin. 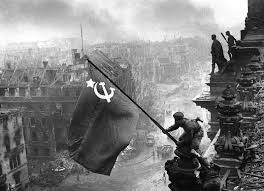 How did things go so horribly wrong for the once unstoppable German Wehrmacht?  Zhukov’s chief conclusion was that the outlines of Germany’s strategic defeat were first laid when it was unable to encircle and destroy the Soviet fighting forces in the initial German surprise offensive, the fate that had befallen so many of Germany’s prior foes.  The Soviets fell back orderly, even while suffering millions of casualties doing so, eventually to regroup in the Winter of 1941.  The Germans had learned the wrong lesson, emboldened by their prior success in Western Europe.  Clearly, they should have paid more attention to the account of Napoleon’s frigid catastrophe in Russia, as laid out in the harrowing memoirs of Caulaincourt, another great read for military history students.  The Russians employed an almost identical strategy to turn back that earlier invasion, abandoning even Moscow to Napoleon.  In retrospect, this history was worth studying…

“Having been forced into being the only game in town, they (central banks) now find that their destiny is no longer entirely or even mostly theirs to control.  The legacy of their exceptional period of hyper policy experimentation is now in the hands of governments and their political bosses.” – Mohamed El-Erian

I fear many are learning the wrong lesson from recent financial events.  The U.S. Federal Reserve’s “quantitative easing” (QE) has marshalled incredible financial resources.  While the Fed has made many errors, few could doubt its power to conjure up trillions of dollars and the impact that money can have.  Other policy makers – and quacks and dreamers too - may look on with envy, dreaming of all the “good” they could achieve if only they could re-direct those trillions.  After all, they think, has not the Fed created a “magic money tree” with trillions available – seemingly for free – without the inflationary consequences so many once feared?  This is the thinking behind the mis-named “Modern Monetary Theory” (MMT).  Do not count me in their camp.

I never bought into the thinking that QE, at least in the form that we now know it, would be inflationary.  The aggressive actions by the Fed and the world’s central bankers certainly helped to stem the deflationary tide of liquidation that was rolling through the markets in 2008.  Since then, these central banks have proven to be powerful weapons when subsequently deployed, at least in the manner in which they have been deployed so far.

Let me be clear.  My point is the Fed’s ability to create money is very powerful.  It must be used wisely. Clearly, the wealthy have benefited dis-proportionally from QE, which in my opinion is at least partly behind the sustained anger and social unrest breaking out globally, seemingly on a daily basis.  If central bank power is used in the wrong way, it has potentially devastating consequences to weaken currencies and create financial havoc.  Sadly, I can foresee a future where the Fed’s mandate is changed by different political masters and its subsequent mistakes can play out in the markets, to the disappointment of many.

Many are the unintended consequences of central banks’ QE and lower interest rate policies, including what I fear may be a future pension crisis from ballooning liabilities.  That is why I look to the political future with trepidation.  I can foresee widening social unrest among vital civil servants, such as policemen, firemen, and teachers many of whom anchor our middle class and contribute to our way of life.  They may find themselves in the future increasingly disappointed by dubious pension promises.  Higher taxes for citizens versus lower benefits for civil servants is the debate I foresee.  Both sides are likely to be frustrated with the outcome, which is where MMT might seem to come in as a “solution.”

Advocates of MMT point to the “non-inflationary” impact of QE and use that as what I believe to be a flimsy basis to extrapolate that central banks should print money to finance governments at will, among other things, with very limited consequences.  MMT’s proponents want to increase the role of government in the economy, super-charged by central banks.  It sounds like a great theory but, like most utopias, its results are likely to disappoint.  I can understand how it could seem a particularly welcome tool should the debate I note above boil over.  My view is that such a policy would be a terrible mistake.  Some thoughtful observers, such as Bridgewater’s Ray Dalio, caution that MMT may be inevitable.  I fear he may be right.

Let me be very clear: if ever MMT were to be seriously implemented I believe it would be a terribly misguided inflationary mistake.  This danger, thankfully, remains distant, but its future outline is growing more visible.  For instance, look no further than the political campaign of the U.K. Labour Party’s Jeremy Corbyn’s “People’s Quantitative Easing.”  Politics, not economics, are likely to guide events.

This does not mean we expect imminent inflation nor are we changing our views on bonds.   Far from it.  Many profound political changes must occur first, none of which are likely to escape the notice of the watchful eye of our research team.  Bonds remain an integral part of our diversification strategy.  Rather here we outline for you what we are watching over the horizon.  As always, our goal is to help you understand our research process and the issues, both present and future, that it is monitoring.

“A man that carries a cat by the tail learns something he can learn in no other way.” – Mark Twain

Today’s conclusion is that central bank “success” yesterday is not the same thing as central bank success tomorrow.  Here I think MMT proponents are learning the wrong lesson, with potentially devastating consequences, if ever they get the chance to make them real.  Political events will drive whether or not we go down this path.   We have important political decisions to make in the future that we must safely navigate.  They are yet before us and will drive in time impactful economic outcomes.

It is to prepare for times such as these that I turn to the study of history, for I believe that financial decision makers are going to need all the help that they can get in navigating future markets.  However, studying history is not the same as learning the right lessons from history.  Our research team is taking this seriously.  For now, the risk of inflation appears to be minimal, but we are vigilant toward political changes that may alter the future balance of risks.  I suggest you do the same.