The Fed is at it again! Not content with its nearly successful attempt six months ago to break the financial world, the Fed is once again fiddling while interest rates burn. Today we examine recent strong moves in interest rates, and the prospect of more to come, so that we may heed their message. We are listening! But is the Fed? The answer to this question may well drive future liquidity, which as Stan Druckenmiller suggests below, can hold the key to the markets.

“Earnings don’t move the overall market; it’s the Federal Reserve Board…focus on the central banks and focus on the movement of liquidity…most people in the market are looking for earnings and conventional measures. [But] it’s liquidity that moves markets.” – Stan Druckenmiller

Stan Druckenmiller is one of the most legendary investors of all time.  His track record of earning thirty years’ worth of 30% plus returns is unrivaled.

It should come as no surprise that someone with such dramatically unconventional returns would have an equally unique way of looking at the financial world.  Just a few weeks ago, he appeared on CNBC to share his views, which you can see at the link below.  I never miss an opportunity to hear his thoughts, and neither should you.

Today we explore his opinion that liquidity is the most important driver for the market.  There are many market-based indicators upon which we have come to rely that indicate liquidity, such as the gold/silver ratio, as an example.  Another useful tool is the contrast between the Fed’s policy guidance on interest rates with what the market has priced in.  Thankfully, the market provides us with highly explicit tools that provide clear insight into its thinking.  While the market’s forecasts are certainly not perfect, I will take its opinion over the Fed’s every time!

I believe that the graph below demonstrates that the Fed is quickly running out of time to face reality and dramatically cut interest rates.  Sadly, I fear the Fed doesn’t get this.  In my opinion, this looming Fed error raises the odds of downside volatility in equity markets, and for the Fed to, once again, reverse itself shamefacedly and scramble after a runaway market.  We saw this pattern in prior downcycles in 2000 and 2007 and fear we may yet see it again.

The chart below shows the trend in two important interest rates.  The first in green is the Fed Funds Target Rate (FDTR Index in Bloomberg).  This line represents the current Fed Funds interest rate.  The second in blue, shows the market’s expectation for short term LIBOR interest rates in December of 2019 (EDZ9 Comdty in Bloomberg.  Note further that I subtracted the TED Spread premium between LIBOR and Treasuries to make the two interest rates comparable.)  It appears the market has dramatically reduced its forecast for interest rates just six months from now.

While the market’s expectations for future interest rates were above those implemented by the Fed, the Fed could hike interest rates and still run a stimulative policy.  In Mr. Druckenmiller’s framework above, this seems to have promoted ample liquidity.  Until September of 2018 that is. 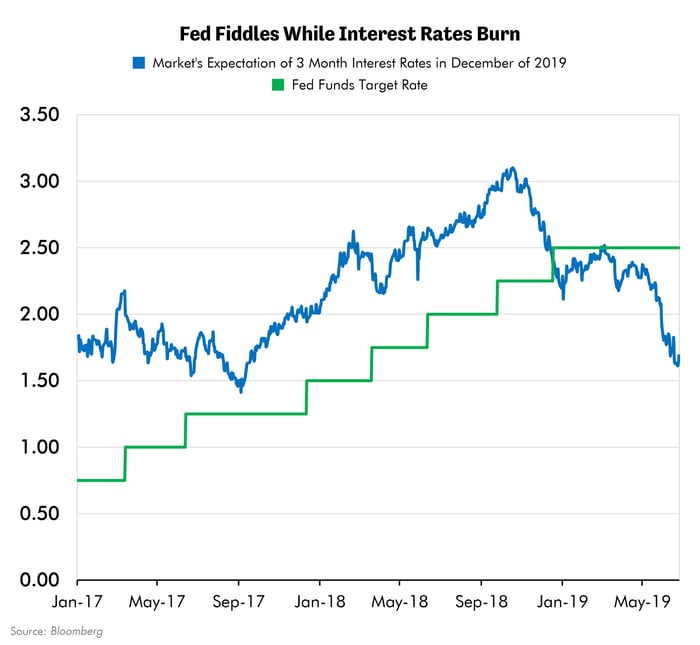 Since then, the market’s expectations for 3-month interest rates in December 2019 have collapsed.  Fed Funds rates today are at 2.5%, while the market essentially is pricing in by December, a rate closer to 1.5%, nearly 0.90% lower – more than one third under today’s rates.  This suggests to me that the market is pricing in nearly a full percent of rate cuts in the next six months!  This is a pace of decline unrivaled since the last recession.

And if you were hoping that the Fed is heeding closely this message, you would be wrong.

In our opinion, the Fed’s recent commentary about the future course of interest rates has been thoroughly disappointing.  Even prominent “doves” among the board, such as Governor Bullard in his comments earlier this week, suggested a reduction of 0.25% was enough for “insurance.”  In our view, this is patently absurd.  It completely ignores the message of the market, which has already priced in four times that amount over the next six months!  I don’t know how much longer the Fed thinks it has before it is forced to act.  But I believe that we can all recall the unsettled markets in the fourth quarter of 2018, when the S&P 500 responded to a fiddling Fed with a nearly 20% collapse.

The chart below is strongly suggestive that the markets are paying close attention, certainly more than the Fed seems to be.  It shows the strong relationship between the ratio of the total return of the S&P 500 versus those of the U.S. Treasury long-dated bond on the one hand, and the market’s expectation for interest rates in December 2019 on the other.  If the Fed falls further behind the curve in the pace at which it lowers interest rates, this ratio may, in despair, fall further to the detriment of equities but to the benefit of longer dated U.S. Treasury bonds.  Certainly, that has been the pattern in recent years.

It’s not just the Fed that has fallen behind the market’s dramatic lowering of interest rates.  The chart below illustrates just how profoundly wrong the “experts” have been, as 100% of the sixty-nine economists surveyed by the Wall Street Journal got interest rates wrong too.  It appears they over-estimated where the yield on the 10-year U.S. Treasury Bond would be today.  None could stomach a yield less than 2.5%, much less a rate with a one in front of it, achieved in recent days.  So much for the experts!

As Stan Druckenmiller has suggested, investors who had the foresight and temerity to protect themselves through the ownership of these bonds have profited handsomely as interest rates have collapsed.  Longer duration bonds have enjoyed an even more powerful move, such as the near 19% price rally in the most recently issued U.S. government 30-year bond!  This bond demonstrated its merits by performing when its holders needed it most, during the meltdown in late 2018, repeating a pattern that held true during the early days of the 2000 and 2007 recessions. Importantly, this rally in bond values has continued despite the stock market’s sharp recovery since December, demonstrating the bond’s highly undervalued qualities as a hedge that most had overlooked: as a form of insurance that pays its holders to own it.  Not bad!

“Never, ever invest in the present…  you have to visualize the situation 18 months from now, and whatever that is, that's where the price will be, not where it is today." – Stan Druckenmiller

Markets attempt to anticipate an uncertain future.  Those who would risk their capital in the markets would be wise to heed Mr. Druckenmiller’s advice and focus on the future, not on today.  The LIBOR/Eurodollar markets are focusing on that future.  We believe their message is disturbing.

The market anticipates that the Fed will be forced to cut nearly a full 1.0% in the next six months.  Investors have been spared such an experience since the beginning of the 2000 and 2007 recessions.  Investors should heed Mr. Druckenmiller’s advice that suggests owning gold-related investments and U.S. Treasury bonds is wise at the present time.  Certainly, long-time readers of this publication will likely recognize in his advice our own consistent voice on these matters.

As we look to the future, we have the expectation that dramatic events are likely to take place in the next six months.  Disagree with the market if you like but fight it at your own peril.  We, unlike the Fed, prefer to heed the market’s warnings and invest accordingly.  We think it would be wise if you did the same.