In today’s research, we outline our view that diversification should not end with the simple ownership of many holdings within a portfolio. Rather, it should go further still to ensure that each individual investment has multiple ways to win.  Given that the future is unknowable, try to put the odds in your favor by limiting risk.  We think this means getting paid to wait in a security that has both limited downside and multiple ways to win.  We believe that, done with discipline and patience, this risk management process will allow you to more confidently face an unknowable future.

Mark Twain surely must be one of the world’s most quotable people.  His command of the English language is second to none, making him one of my favorite authors.  He was the highest paid author of his time and one of the most famous Americans of his era.  While many are familiar with Twain’s legendary written work, most may not know that he could literally be the last guy from whom you should take investment advice. 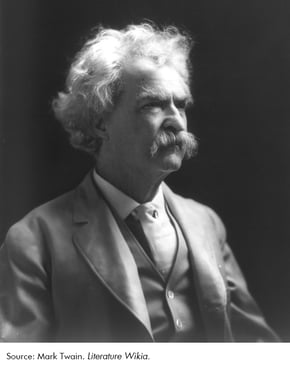 Twain was a horrible investor.  In fact, he failed so miserably that he went bankrupt in 1894.  It would take an exhausting year-long global speaking tour of 122 shows in 71 cities across four continents to repay his creditors.  His spectacular failure suggests that investors should do the opposite of his advice above and be diversified.  In today’s research, we argue that diversification should not end with the collective holdings within a portfolio, but should go further still to ensure that each individual investment has multiple ways to win.

In our last “Trends and Tail Risks,” we argued for the principle that valuation discipline is the key to successfully investing in an uncertain world.  In today’s research, we want to put flesh and bones on those principles by walking you through what we think is one example of such thinking, Qualcomm (QCOM).  Let us explain.

“October: This is one of the peculiarly dangerous months to speculate in stocks in. The others are July, January, September, April, November, May, March, June, December, August, and February.” – Mark Twain

We think that investing is different from speculation.  Investing, to us, is not about having a crystal ball for the future.  Rather, it is about limiting risk by applying the principles of diversification and risk management to better face that uncertain future.  More specifically, this means holding a portfolio of investments that has already been de-risked.  We believe that Qualcomm (QCOM), a stock that has been in the news recently, is an excellent example of these principles at work. 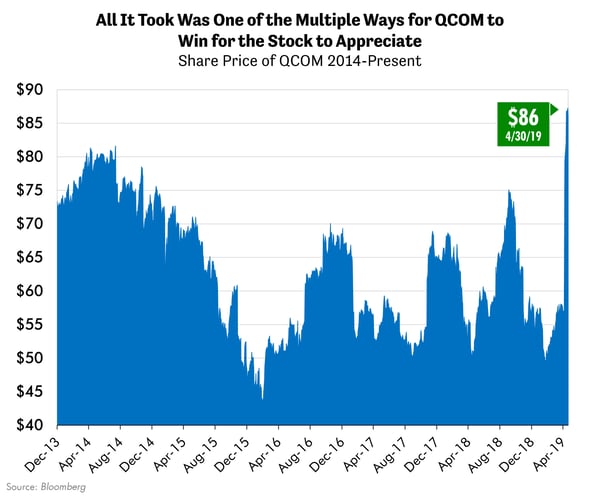 Those investors fortunate enough to own QCOM, a micro-chip maker and technology licensing company, have enjoyed a 50% gain in the last two weeks.  But the real story of QCOM’s returns goes back much farther than just a few days.  In our opinion, it begins with risk management and ends with multiple ways to win.

We believe QCOM had a lot going for it from a risk management perspective.  By that we mean that it was a highly controversial stock, the uncertainty of which weighed upon the valuation at which the shares traded.  QCOM got there the hard way, with the threat of a huge lawsuit hanging over the company from Apple, one of its largest customers.  In my experience, the kind of uncertainty the market hates the most is legal risk.  Why?  Because the range of outcomes is so broad and often beyond the skill of many professional investors to value confidently.  This overhang of uncertainty was likely factored into the shares as a discount to where they would otherwise trade.  No one knew exactly, however, where the shares would trade in the absence of this legal threat.  It seemed safe to think that the answer was “higher.”

So, while much was uncertain, investors could analyze what was knowable.  As we outline below, these factors conspired to lower QCOM’s value and therefore potentially limit the risk in owning the shares.  First, the shares traded with a 4% dividend yield that had grown at 12% per year over the last five years.  So, QCOM’s owners were paid to wait.  Second, as displayed below, the company was shrinking its share count through an aggressive buyback program, which increased the per-share value of each remaining share outstanding. 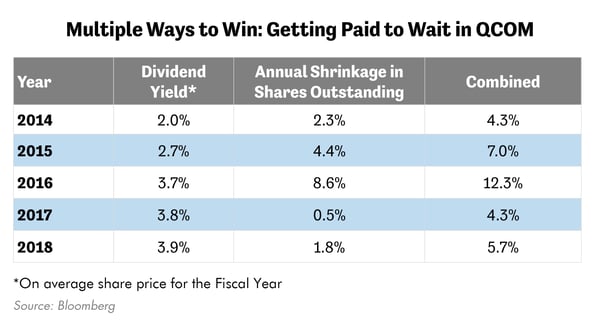 Third, investors could see that QCOM’s balance sheet was sound with its debt highly rated “A-” by S&P.  In our opinion, such balance sheet strength is always welcome in limiting risk.  Why?  Because it means that the company is not at the mercy of the capital markets to fund its operations, which is another way of making time the patient investor’s friend.  Fourth, (shown below) QCOM’s price/book valuation versus its competitors and comparable securities, the SOX Index of semi-conductor companies, was at an eighteen-year low. 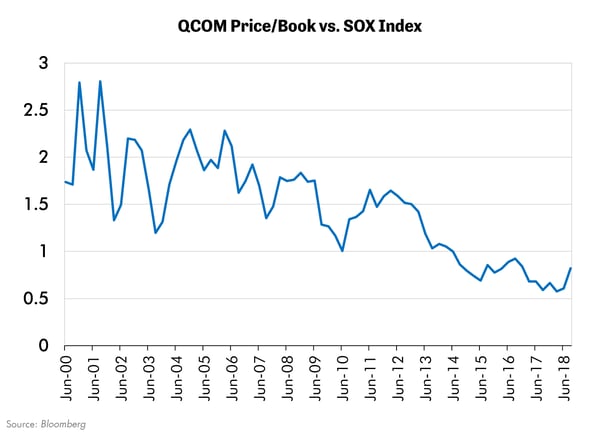 While no one can predict the future, with this lower valuation, investors in QCOM could reasonably expect that they had multiple ways to win, or, as we like to say, lots of optionality.  These included 1.) leverage to improvement in the semi-conductor cycle, 2.) secular growth from demand for microchips in the “Internet of Things” of connected devices in homes of which QCOM is the market leader, 3.)  upside from any attempt of a competitor to profit from QCOM’s valuation discount by buying the whole company, and 4.) sustainable growth from the company’s strong intellectual property position.

Of course, in retrospect only, observers would come to add a fifth way to win, which is the exit of a key competitor, Intel, from a business line where it competed with Qualcomm.  Intel seemed to be scared enough to exit this business on the same day that Apple and Qualcomm settled their lawsuits.  This suggests to me that Intel deemed competing with Qualcomm as hopeless, which is saying a lot coming from Intel!  Arguably, the real value – in retrospect of course – of the Apple litigation may very well be that it was not a liability after all but was, in fact, an asset that demonstrated QCOM’s exceptionally strong competitive position.  Investing is certainly full of surprises.

With one announcement two weeks ago, much of the uncertainty around QCOM vanished in a single day.  The company settled its legal disputes with Apple, which prompted QCOM’s shares to rally 50% in two weeks for an increase in value of about $36 billion.  To me, this suggests that $36 billion is a reasonable estimate for the discount the market had factored into QCOM’s value for legal risk.  The lifting of this risk resulted in a lot of upside for investors that owned the stock.  Of course, there was likely no way that anyone could have predicted this outcome in advance.  That’s exactly our point.

We believe QCOM’s success was certainly a victory for those process-driven, thoughtful investors who prioritized risk management over prediction; who focused not on an unknowable future but rather on the optionality of multiple ways to win in an uncertain world.  Done again and again, with such thinking embedded in each holding within a diversified portfolio, we believe such disciplined investors can reasonably expect – over a multi-year period – for that portfolio to surprise in the ways it may find to succeed.  If that portfolio were to be successful over time, we strongly believe it would come not from correctly guessing a future that no one can control, but rather from superior risk management, the tools for which are surely in investors’ hands.  That repeatable process is the one we seek to execute with each one of our investments.

Twenty years of professional investing has taught us many things.  A few lessons stand out, each of which finds expression in QCOM’s trading history, and each of which we believe separates the discipline of investing from the gamble of speculation.  Given that the future is unknowable, try to put the odds in your favor by limiting risk.  At times, this means getting paid to wait in a security with limited downside that has multiple ways to win.  We believe that, done with discipline and patience, this process allows us to confidently face an unknowable future.  The best way to achieve this goal, in our view, is to insure diversification doesn’t end with the simple ownership of many holdings within a portfolio but rather goes further still when each individual investment has multiple ways to win.