Monetary policy is changing again! Both the U.S. Federal Reserve and the European Central Bank have taken up quantitative easing (QE) again after abandoning it in 2018. What will this change mean for asset prices? We outline below what we are watching to answer that question.

I would understand it if you found constant changes in monetary policy frustrating. I certainly do. I don’t like the idea of the rules of the game changing all the time. But every time our central bankers shift their policies, that is just what is happening. And these bankers have proven that they have literally tens of trillions of dollars they can and will spend. Ignore them at your own peril!

This can be especially frustrating for long term, fundamental investors when, in just the last few days, we have seen some huge reversals in previously long-announced policies. Both the Fed and the ECB adopted policies in recent days to resume their bond-buying programs (known by the Orwellian sounding name, QE), forsaking 2018’s balance sheet shrinkage for renewed “stimulus.”

Our opinion is that uncertainty in investing has risen since the collapse of the Global Financial Crisis.  Government meddling in the markets seems to have expanded exponentially, complicating the lives of long-term fundamental investors, as we believe increasingly desperate central bankers are adopting ever more unorthodox methods. Investors aren’t making this any easier either, seemingly responding to each monetary policy change like Pavlov’s dog, which was famously taught to drool at the sound of a ringing bell, once the dog came to associate the ringing bell with getting fed. Have the world’s central bankers taught investors that QE means rising markets for risk assets? Or is something different at work?

Central bankers are ringing the bell again, will the world’s investors drool? Today’s “Trends and Tail Risks” analyzes past investor response to QE to reach a thoughtful answer to this question.

“The truth is, Pavlov's dog trained Pavlov to ring this bell just before the dog salivated." - George Carlin

Comedian George Carlin asks the right question to begin our analysis. Who is training whom? Is it investors who have taught central bankers to provide QE at the first sign of trouble? Or are investors simply reactive pawns in the ever-changing game of monetary policy? A lot may be riding on the correct answer.

In January 2019, while global QE was ending, we noted that:

Over the next few months, the market embraced this view.  But what happens now that monetary policy has changed, again, meaningfully? On September 12, the ECB announced it would resume QE and buy $22 billion per month ($264 billion per year) of bonds for an unlimited time. Just a few weeks later on October the 8th, the Fed signaled it would buy $720 billion worth (annualized) of U.S. government debt.

Gold prices, and those for U.S. Treasury bonds too, hit their recent highs a few days before these two announcements and have declined slightly since then. The jury appears to be out, for now. But what does the historic data say about the direction of these two asset classes? Is there a clear answer? 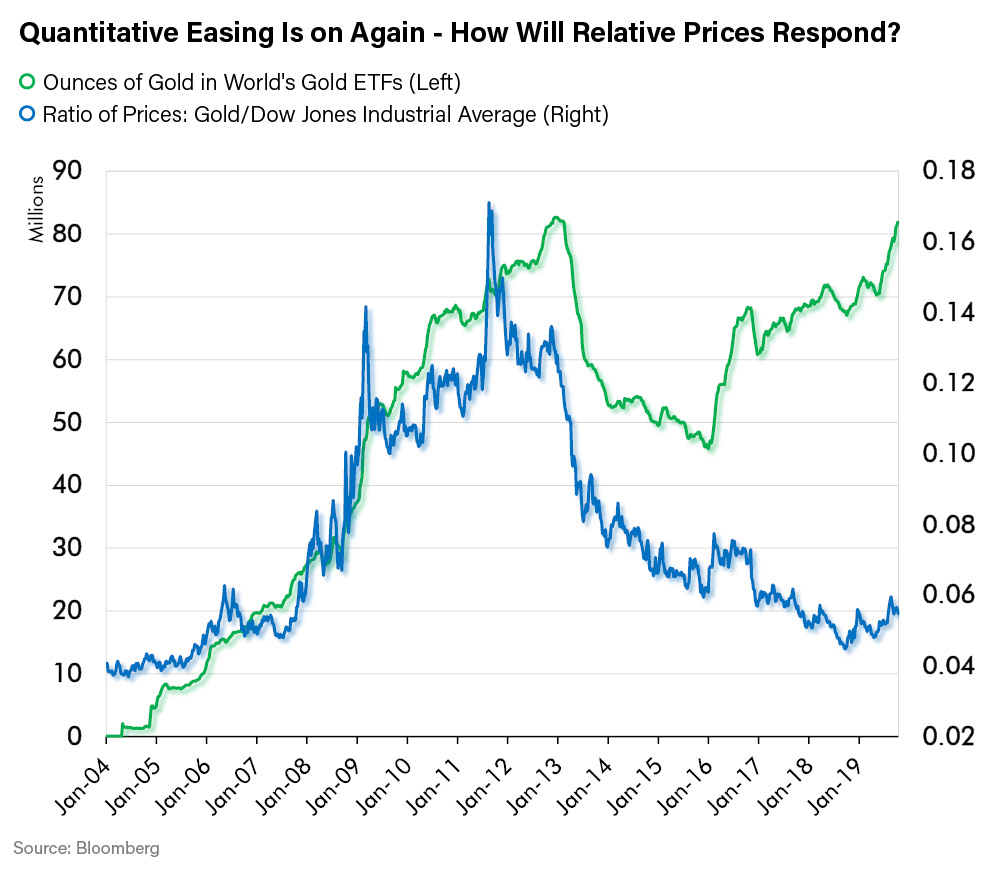 Rising demand for gold in the world’s gold ETFs drove a higher ratio of gold prices to the Dow Jones Industrial Average from 2004, when data began, until 2012. That trend reversed, at least temporarily, from 2012 to 2016, when the ounces of gold held in the world’s ETFs once again began to rise, dragging gold prices higher with them.  During this move however, the ratio of gold’s price to that of the Dow Jones Industrial Average continued to fall, as the Dow rallied faster than gold. I have argued before that the ECB’s 2012 promise to “do whatever it takes” lowered volatility and therefore curbed the demand for gold (and U.S. Treasury bonds) as volatility hedges. Who needs a hedge when the stock market goes up every day?

What happened in 2016 to change the trend of falling gold investments in the world’s ETFs? Why did demand begin to rise again – even while the Dow continued to rally? We have been monitoring the trend of negative interest rates for a long time now and think they can shed some light on this issue.

In fact, we first wrote about negative yielding bonds in February 2015. Consensus had dismissed their emergence as crazy. A passing fad. We noted then that we thought they could spread and become more prevalent. And they have. As the chart below suggests, negative yielding debt now has a market value of $13 trillion – that’s trillion with a “T.” No matter how nonsensical you may think negative yielding bonds to be, they are a powerful force in today’s market.

“In history, when the course of events requires it, the nonsensical becomes reasonable.” – Trotsky

Did the $10 trillion increase in the value of negative yielding bonds from 2015 to 2016 increase gold demand?  Will the next round of QE now under way exacerbate this trend? We believe the answer is yes. Certainly, if we had to choose between owning a negative/no interest bond (with default risk), and gold without default risk, we know which one we would choose! We think it unwise to underestimate the scope of demand that could reveal itself for gold should the trend of negative yielding bonds grow even stronger, as we anticipate it may.

In addition, our ongoing trade dispute with China plays a large role in how we think about the future of gold demand, and that of other investments traditionally used to diversify portfolios such as U.S. Treasury bonds.  While no one knows what the future holds, it seems clear that our trade relations with China have deteriorated dramatically in the last eighteen months, and a tariff war is underway.  In recent weeks, China took the new and inflammatory step of devaluing its currency, the Renminbi, which mitigates the impact of higher U.S. tariffs. I find it extremely unlikely that the present U.S. Administration will allow China’s competitive devaluation to go unmatched.

In fact, the chart below demonstrates that gold prices are marching higher in both Renminbi and U.S. Dollars.  We believe higher gold prices are, after all, the best evidence of currency devaluation. This illustration shows that devaluation has been the dominant trend for many years for both the Dollar and the Renminbi in gold terms. If such has been the case during the previous long period of trade amity, I see little reason for this to change in today’s more contentious environment.

I could easily imagine a scenario where investors seek out gold as an investment that can profit from trade driven competitive devaluation. Certainly, the example of the 1930s comes to mind. In that period gold performed well during the collapse of the previous free and open trading system as nations sought to “beggar thy neighbor” through currency policy. Each nation sought its own self-interest, trying to devalue its way to prosperity. This created a feedback loop of competitive devaluation that worked to gold’s benefit. 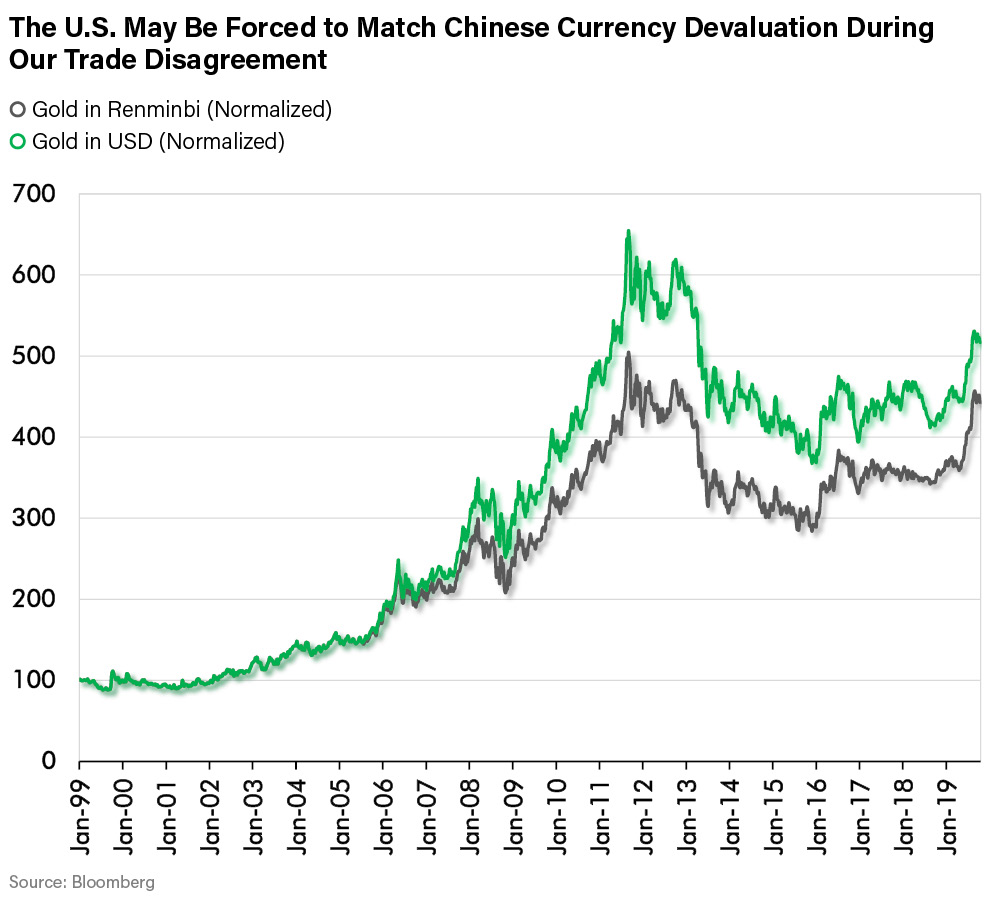 “Don’t become a mere recorder of facts but try to penetrate the mystery of their origin.” – Ivan Pavlov

We have long believed that, while the Fed and ECB can create money at will, they cannot tell it where to go.  Investors, despite the best efforts of central bankers, still have a say.  For this reason, we attempt to keep an open mind about the impact of changing monetary policy on asset prices.  Our central bankers may have renewed their war on volatility, but are we seeing the limits of QE in the creeping spread of negative yielding debt?  What role will our changing relationship with China play?

We look for clues by monitoring demand for gold in the gold ETFs, whether the alarming expansion in negative yielding debt continues, and competitive devaluations.

Bitter experience has taught us that investment results rarely proceed in a straight line.  Rather, they often seek a more circuitous route to their eventual destination.  Our discipline is to constantly re-evaluate the prospects and valuation of our investments to ensure they remain current with our long-term views.  We are convinced that one of the best risk management disciplines is an open-minded re-appraisal of our views, especially when the world in which we invest may be so subject to the whims of central bankers.