Sam Zell Invests in Energy. Should you?

Savvy cyclical investor Sam Zell is buying energy assets. Our own research team has been studying the energy sector with much interest as well. Many of the potential investments we are now analyzing are down 75% to 80% yet remain free cash flow positive with investment grade balance sheets. That’s the kind of setup we like!  Many of these opportunities may be setting up as great potential investments. We, as value investors like Sam Zell, get interested when capital is flowing out of the sector.

One of the secret weapons in the business of investing is watching and learning from great investors.  Some I have had the honor of working with personally. Others I have watched from afar.

Of course, the trick is knowing whom is worthy of real respect. Our focus is always on long-term results.  Why? Our experience is that anything can – and often does – take place in the short run. The world is littered with one hit wonders, kings for a day.  However, over the long run, great acumen and insight win out over luck and become much easier to spot. This is especially true, in our opinion, when viewed across multiple economic cycles.  It will come as no surprise to frequent readers of this publication that I believe that basically all investing is cyclical.

So it was, therefore, with great interest that I came across this recent article in Bloomberg about someone whom, in my opinion, is one of the world’s best cyclical investors, Sam Zell.  “Sam Zell Says He’s Buying Distressed Oil Assets Amid Slowdown.” 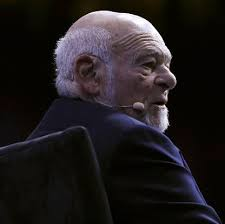 Like many brilliant investors, Zell has an eclectic background.  His first career as a lawyer lasted but one week, as he returned to his earlier entrepreneurial interest in real estate, with which he paid his way through college.  In this field he earned his way to an estimated net worth of $4.4 billion chiefly through investing in cyclically depressed assets in real estate.  In fact, he is the one person most credited with the creation of the REIT (real estate investment trust).

Zell first became famous as a cyclical investor profiting from the crash of the real estate market in 1973-1974, one of the deepest and most profound downturns since the Great Depression.  Zell’s goal, and that of his partner Robert Lurie, was to buy great assets cheap with limited downside amidst all the forced selling of that downcycle.  Rather than flipping assets for short term profits, his plan was to hold for the long-term and earn sustainable income on these quality assets.  Thus, he launched one of the world’s great fortunes in real estate.

Perhaps his most famous trade was the sale near the 2007 real estate peak of his company Equity Office Properties for $39 billion, in what was the largest leveraged buyout ever at that time.  Selling his life’s work into an epic real estate bubble is a remarkable feat of timing.  Little wonder that he described his success as coming from “dancing on the skeletons of other peoples’ mistakes” which is the source of his morbid nickname, “The Grave Dancer.”  With a track record of both buying and selling like a champ, Sam Zell might just be someone to listen to when it comes to cyclical investing.

“The amount of capital available in the oil patch is disappearing.  I compared it to the real estate industry in the early 1990s, where you had empty buildings all over the place, nobody had cash." – Sam Zell

It has probably not escaped the notice of long-term readers that for many years this publication was very circumspect about the fundamentals of the energy sector.  Why?  For one good reason: capital can destroy returns.  Put more specifically, it’s our experience that an influx of new capital into a sector is likely to bid up current asset prices and lower future returns as supply growth follows investment with a lag.  This is a potentially toxic combination.  Was it ever not so?

Please understand that the Shale Boom in the U.S. Oil Patch was one of the biggest capital expenditure booms of the modern era.  Trillions of dollars, much of it financed through seemingly dodgy junk bonds, was invested with the goal of making the U.S. the world’s largest oil producer.  And these trillions worked!  Imagine that!  Supply growth exploded...and energy prices crashed.  Was this truly that difficult to foresee?  Something tells me Sam Zell, and his knowledge of cycles, could see it coming.

Every cycle has its own unique wrinkle.  This last cycle’s wrinkle was the seemingly limitless amount of “distressed investment” capital that flooded the sector in 2014, even as the oil pricing cycle had just begun to crash.  What were these investors thinking?  Could the downcycle really be over?  After all, it had just begun!  I asked this question in late 2014 to one of the world’s savviest energy observers.  He thought no.  He was right!  There was still too much capital flowing into energy.  The downcycle had more to run.  Five years later, is it time to buy?

“Sooner or later, everyone sits down to a banquet of consequences.” – Robert Louis Stevenson

As so often happens in cycles, one bad turn compounded another. This time it worked through the credit markets, as debt-laden structures wobbled. With the stern passage of time, energy companies that thoughtlessly gorged on the seemingly limitless capital shoved on them by willing investors woke up to confront the specter of bankruptcy.

Seemingly everyone turned into a seller of energy assets. With everyone selling, desperate for cash, where could asset prices go but down? Supply and demand at work again, this time with capital fleeing the sector, finally.  Sam Zell is excited about this.  I can understand why.  We are too.

“People love focusing on the upside. That's where the fun is. What amazes me is how superficially they consider the downside. For me, the calculation in making a deal starts with the downside. If I can identify that, then I understand the risk I'm taking. What's the outcome if everything goes wrong?”– Sam Zell

The longer I am at the business of investing, the more I believe it is important to focus on fewer and more powerful principles. Cycles. Supply and demand. Limiting downside. Thinking about what can go wrong. The value of patience.

When it comes to cycles, there is no more powerful force than supply and demand, with supply very often a lagged function of capital flows. When capital flows out, asset prices often drop, and future supply may fall – setting up a brighter world for future prices. Is that where we are now in energy? It certainly is starting to feel that way to me and to our research team.

What has changed is not the assets themselves, but the environment in which they are embedded, and how capital flows effect those assets.  I think that is why Zell is so focused on risk management. Zell may not be an energy expert, but he is clearly a man who understands the power of supply and demand. Zell has proven across multiple sectors and multiple cycles that he knows how to buy assets cheaply.

Our research team has been watching the energy sector with much interest lately. Many of the potential investments we are now circling are down 75% to 80% yet remain free cash flow positive with investment grade balance sheets. It’s our belief that many of the opportunities may be setting up as great potential investments. Don’t be surprised if you see us focus more on energy related investments, for the first time in a long time.