Swing and a Miss

One of the biggest investment surprises in recent memory has taken place in two important markets over the past year or so: rallies in the price of gold and that of the U.S. government 30 year bond.  That both would rally at the same time seems a paradox to many but not to us and certainly not to long-term readers of this publication.  Many astute observers, who are paid to know better, missed both moves because they missed the common driver behind them: the global trend of falling real interest rates.  What did we understand that they didn’t – and more importantly - how can investors use this knowledge to navigate today’s volatile markets?

“My 6 percent [yield on the U.S. government 10-year bond] by 2021 call is perfectly on track. No reason at all to change it.” – “Bond King” Jeff Gundlach September 20, 2018 right before yields collapsed to less than 2% in the biggest rally in bond prices in years.

So far, this appears to be a big swing and a miss by the Bond King! Once again, the market has proven its ability to thwart the foresight of even the most respected investors. You could be forgiven if you thought that the efficiency with which it moves against “expert opinion” demonstrated that it exists solely to humble participants, even those as experienced as Bond King, Jeff Gundlach.

Of course, such moves are so strong precisely because “no one” sees them coming and so many lean the wrong way at the same time. That is the nature of markets. I can tell you it was a lonely world about a year ago due to the widely held view that only idiots would own U.S. Treasury bonds, as the CEO of J.P. Morgan outlines in the quote below.

“You had better be prepared to deal with rates [10 year U.S. government interest rates] of 5% or higher…Business sentiment is almost at the highest level it’s ever been, consumer sentiment is at its highest levels, markets are wide open, housing’s in short supply…if you look at how the table’s set, consumers are in very good shape.” - Jamie Dimon, CEO of JP Morgan

Jamie Dimon is another great example of someone who does not fit anyone’s definition of a stupid person.  Clearly, he has at his fingertips a wealth of data that can arguably give him special insight into events taking place right now.  But are markets reacting to news right now?  I don’t think so.  It’s far more likely they are wisely focused upon future events – on where events are going.

Despite this better information at Mr. Dimon’s fingertips, we have yet more evidence of a failure to anticipate.  What would happen in the future was arguably anyone’s guess. Now, we can see how events have unfolded.  But not then!

Yet when such well-placed market observers as these weigh in against our long-held views, what are we supposed to do?  This was more than an academic question when it came to bonds last year.  After all, among all the things about which reasonable people can disagree, surely the most reasonable of all is the unknowable future.  How could we possibly seem to be right, when so many respected experts were sure that we seemed to be wrong?

Those are the times when research-driven, disciplined investors can earn their money.   We have to stand our intellectual ground and do a lot of explaining.  We try to focus on three things.  First, on the long-term goals our clients are trying to achieve through investing.  Second, on the value of patience in seeing those goals through in a volatile market, because anything can happen in the short run.  Just ask the Bond King and Jamie Dimon.  Third, we try to explain the actual forces at work that we believe are driving prices. This is where research comes in.  Sometimes – most of the time – we believe that it is not about better data. It is about a better framework for understanding how the world works.

“Gold has lost its luster and there’s other mechanisms in which you can store wealth that are inflation-adjusted.” – Larry Fink in 2015, the CEO of Blackrock, one of the world’s largest investment managers

We highlight another swing and miss by the head of one of the world’s largest investment companies above.  The history of the last few years has shown that his view was mistaken, even if understandably his lofty position gave his flawed views a credibility that in retrospect they did not deserve.

Our humble research team contains neither bond kings, leading bank CEOs, nor founders of the world’s largest investment companies.  How is it that somehow our team avoided the mistakes that others in hindsight so clearly missed?  That is what we want to talk about today, because it gets to the heart of the relationship between both gold and U.S. Treasury bonds, and their role in diversifying an equity-heavy portfolio.

Long-time readers will no doubt recognize that our writing on defensive investing has consistently extolled the merits of both gold and longer dated Treasury bonds.  I can’t tell you how many times I have been asked “How can you like both bonds and gold?”  Even if the experts above got it wrong, I know many smart investors who can and do argue forcefully for the merits of either gold or the bond.  However, those who argue for BOTH are rare indeed.  Count us in the later camp.

The market’s verdict on this topic over the past year has closely mirrored our own views, which suggest to us that the market may be affirming our once-heretical standpoint.  What exactly are those views – and what deeper relationships do they suggest that may help investors navigate today’s uncertain markets?  Today we walk through our thinking.

I am a very visual learner, so let me illustrate with a few charts.  The first one below demonstrates that real or after-inflation yields on government bonds have been falling globally for decades.  The first takeaway here is that we believe a global perspective is valuable.  The second is that U.S. real interest rates are dramatically higher than those in the UK and in Germany.  To us that suggests that there is great value in the U.S. bond market, especially relative to those in the rest of the world.  Few shared that view – until recently that is – yet the chart below suggests that conclusion to us, and anyone else who cared to view these markets from a global perspective. 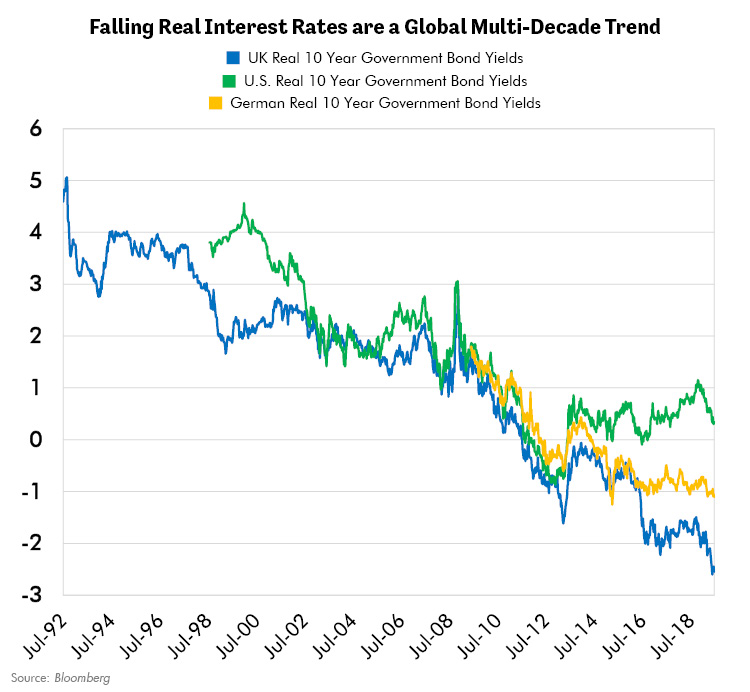 The next link in the logical chain is that as real interest rates fall, the price of longer dated U.S. Treasury bonds can rise, as shown below. This means that investors can profit from this trend through the ownership of such longer dated bonds “as yields get worse.” Seen in this way, the very trend so many complain about reveals itself as a powerful argument for owning these bonds!  Surprise! 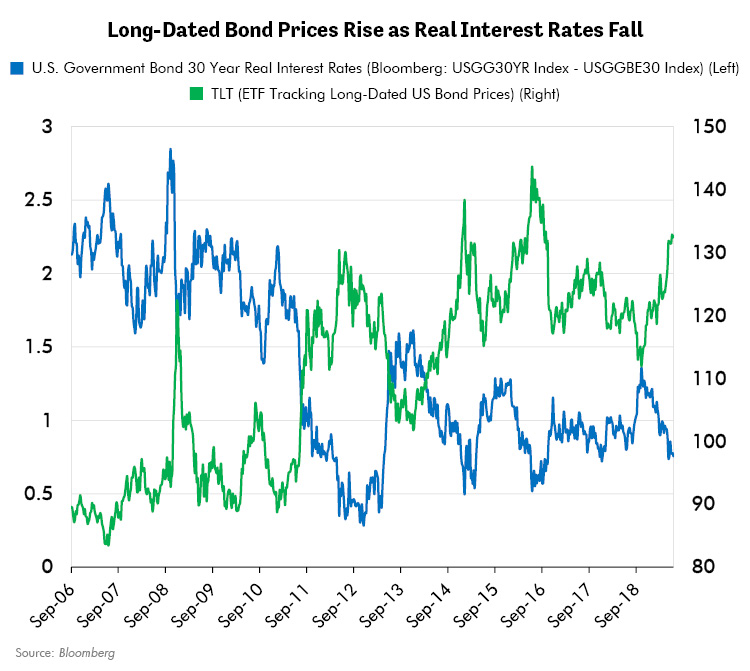 Another link in the logic chain is to note that gold too, like longer dated Treasury bonds, has historically benefited from falling real interest rates. The reason? Gold pays no interest, so as real interest rates fall, the opportunity cost of owning gold falls too. That’s the easy part. The harder part to understand is gold’s value relative to commodities, as we explain below.

The next chart suggests that a rising value of gold relative to commodities is highly correlated with the price of longer dated U.S. Treasury bonds. A freely functioning market sets the prices of these commodities, 21 of them in fact, and for gold as well. Somehow, the market in its wisdom has priced the relative value of gold versus commodities in line for many years with the price of longer-dated U.S. Treasury bonds. We believe this is for a deeply fundamental reason, which suggests to us that we are in a modern-day deflation different from those that our markets have historically experienced. 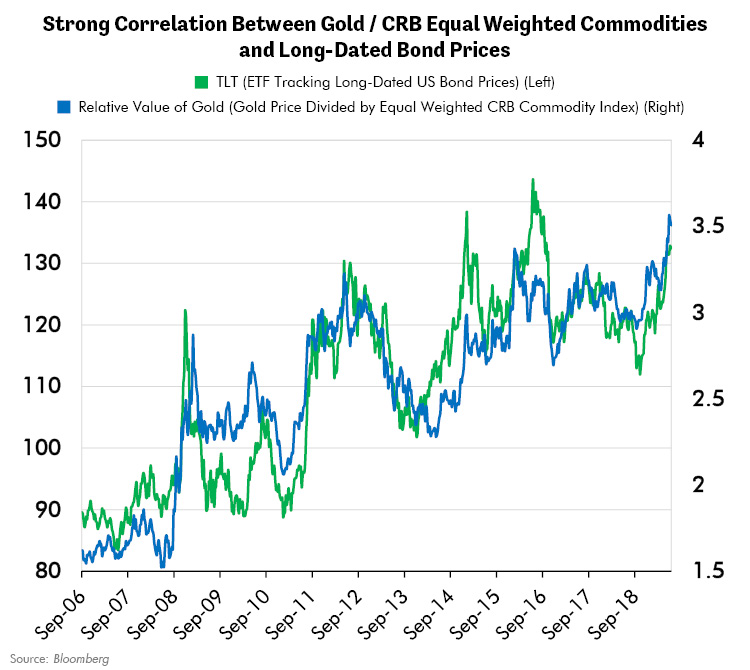 If you want to answer the question, how did we get right what so many others got wrong, we believe that the answer lies in our framework. We suggest you focus on the logical chain we have just outlined. We believe that the world’s debt-driven monetary system is dependent upon ever-falling real interest rates as the fuel necessary to achieve even the disappointingly low growth of recent years. This explains the global, multi-decade trend of falling real interest rates.

In our view, the market is forcing real yields lower as modern-day deflation works its way through our current monetary system in a highly unexpected way. If true, this means that both gold-related investments and longer-dated U.S. Treasury bonds benefit from real growth that disappoints, which is why these investments can diversify an equity-heavy and therefore growth-dependent portfolio. They certainly have in the past year.

One thing that I hope that our readers can conclude from today’s note, is that we think differently about the markets. Risk management in volatile markets is the topic to which we have devoted our professional lives.

I get it that so many others seem to prefer to focus on the happier aspects of markets. After all, who doesn’t enjoy thinking about rainbows, bunny rabbits, fluffy white clouds and blue skies? There is plenty of that kind of thinking in the market, if that is what you are looking for.

We believe that those charged with shepherding capital through volatile markets cannot afford the luxury of ignoring the study of how to handle challenging times as well. Oftentimes, it is only near the end of the cycle that many investors come to learn this hard lesson, that we learned long ago. I would save others if I could from paying the price I paid. But I know that you can’t save everyone.

Are all our years of study demonstrating their value now? Can the framework above help others as it has helped us? Only time will tell, but certainly to us the events of the last year suggest that the answer is yes.  Sometimes, the best way forward can be a superior framework. We certainly believe so.