The Fed can’t print a vaccine for coronavirus COVID-19, but it can attempt to ease market distress by reversing the spike in real interest rates that took place when the Fed allowed inflation expectations to begin collapsing last week.  I remember the same thing happened for a few weeks during the most intense phase of the Global Financial Crisis in late 2008.  Then, this temporary disruption weighed upon the prices of traditional portfolio diversifiers like gold and higher quality, longer-dated bonds such as U.S. Treasuries, and is doing so again in recent days.

These defensive investments were among the very first to recover from the real rate shock that drove the 2008 carnage.  Their rising prices and abundant liquidity provided nimble investors the opportunity to sell these investments high in order to buy beaten down equities low.  Our goal is to do the same thing this cycle too.

However, until real interest rates peak and abate, financial market volatility is likely to remain high.  This could require patience from investors who own these portfolio diversifiers.  Nonetheless, we believe they are worth the wait!  The good news for us as value investors is that market volatility is creating a growing list of new investment opportunities for us to consider.  This list expands each day the Fed stands by and watches real interest rates spike and wreck the world.

“Anyone can hold the helm when the sea is calm.” – Publilius Syrus

Three weeks ago, many equity markets were at all-time highs.  As of this morning, the S&P 500 is down 25% year to date in what feels like the fastest decline in the history of declines.  Financial markets are experiencing the highest sustained volatility since the Great Depression ninety years ago.  Observers are getting used to seeing 10% daily swings in many equity markets, and sometimes many times that in individual securities.  While coronavirus is all over the financial news, it’s not what I want to talk about today.  Today I want to talk about the recent explosion in real interest rates, which is – to me – the most timely indicator of the forces driving this volatility.  Until real interest rates calm down, I don’t expect volatility to moderate, as I explain below.

Nominal bond yields are the sum of three separate components.  The first is default risk, the risk that a bond won’t be repaid, which you can monitor in the credit default swap market (CDS) and is near zero for the U.S. Treasury market.  The second is the market’s expectation for future inflation, which we can track in the “TIPS” market.  Tips are bonds that pay a coupon that changes to keep the investor whole on an inflation adjusted basis.  The third is real interest rates, which I calculate as nominal interest rates minus inflation expectations mentioned above and that I display in the chart below in which the black line shows the trend in interest rates for U.S. government thirty-year Treasury bonds.  You can see that rates have been declining for some time, more than the decline in inflation expectations (shown in blue), which has driven real interest rates (red) lower.  I have long believed that falling real rates are necessary to keep our debt-laden economy functioning.  That hypothesis is finding a lot of support in recent days as real rates spike and markets crash.  I don’t think this is a coincidence.  The same thing happened before in 2008, as you can see from the two circled areas on the chart.  Both spikes were driven by a collapse in inflation expectations, which in my opinion is the single biggest threat to financial markets.  I expect volatility to continue in our overindebted world until these real rates decline.

The 2008 spike in real interest rates, shown in the first circle above, reached its apex in the days following the collapse of Lehman Brothers.  Banks grew wary of lending to each other, hoarded liquidity, and crushed our highly indebted economy with a rising real cost of capital.  The Fed, whose negligence allowed this to happen, only woke up after markets crashed.  Within days, the Fed reversed the trend of collapsing inflation expectations with its announcement of “Quantitative Easing” (QE) in November of 2008.  QE made clear the Fed’s determination to dramatically expand its balance sheet by creating U.S. dollars out of thin air and aggressively deploying the nearly unlimited power this gives the Fed to lower the value of the dollar through higher inflation expectations.

What Happened Back in 2008, the Last Time Real Interest Rates Spiked?

With this policy change, the inflation expectations market responded immediately.  As inflation expectations rose, real interest rates fell, as the dollar collapsed in gold terms.  The dollar’s devaluation would, in time, relieve the funding stress in all markets. Gold rallied 25% by February 2009, even while equity markets continued to plumb new lows until March.  Prices of U.S. government thirty-year bonds soared even faster, rallying by 25% in just over a month – again while equity prices crashed and riskier credits such as junk bonds continued to collapse.  But – if you knew to watch the real interest rate market as a key leading indicator and understood its message - you could have known that relief was on the way.  You would have had weeks to sort through the wreckage and finalize your shopping list of distressed investments even while panic continued to grip the financial markets.  And, best of all, you could have sold these hedges while their prices were rising to buy equities whose prices were still falling.  That’s music to my ears: selling high and buying low!  By the end of December 2008, the worst was over in the private credit markets, when an index of less than investment grade corporate bonds yielded an amazing 27%.  Three months later, in March, equities followed the lead of private credit and rallied.  The crisis, which peaked when real interest rates peaked, was over.  The recovery was underway.

This cycle’s crash in inflation expectations and spike in real interest rates has a different catalyst but it’s clearly just as destructive.  The world changed last Monday.  The catalyst was crude oil prices crashing due to the all-out price war between Russia and Saudi Arabia.  The chart below, drawn from minute by minute runs on my Bloomberg terminal, shows the moment it happened.  Two-year real rates skyrocketed from negative 0.50% to today’s new high of positive 1.4%, an increase of 1.9%.  To me – and seemingly to the markets as well – it is the same thing as the Fed dramatically hiking interest rates by 1.9%. Hiking interest rates into the teeth of a market crash?  In my opinion, that is a rookie mistake.  I think we should expect more from the Fed. 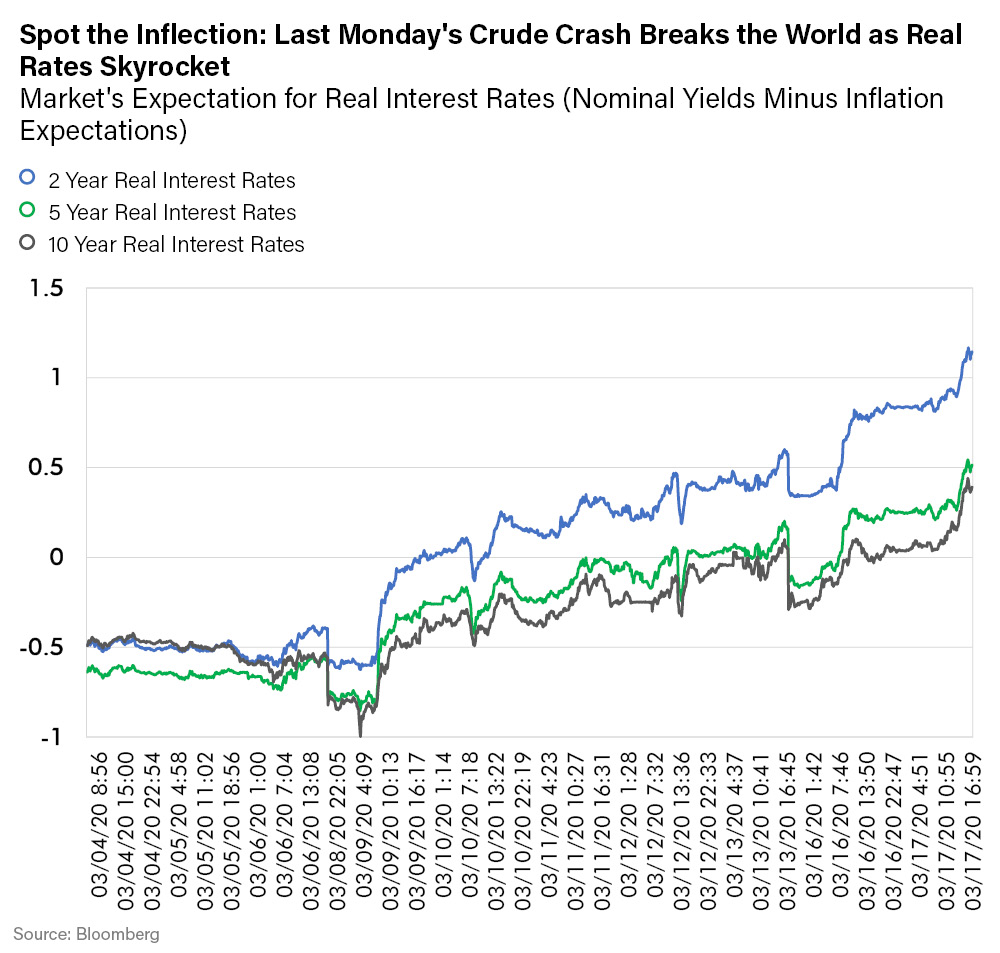 Spiking real rates have weighed on the prices of gold and the highest quality longer dated bonds, even hurting both U.S. Treasuries and AAA muni bonds.  This is limiting the traditional diversification benefit from these investments that their owners were enjoying - until last week’s explosion in real interest rates.  I firmly believe that these dramatically higher real rates are unsustainable because – like in 2008 - markets may continue to decline until they focus the Fed’s attention to its policy error and drive an appropriate policy response.  In 2008, the Fed’s balance sheet expansion and policy change were able to reverse the trend of falling inflation expectations, but the markets took quite a beating waiting for the Fed to wake up.  Wake up Fed!

“Revolutions are good times for soldiers of talent and courage.” – Napoleon

The Fed is not all powerful.  The Fed can’t print a vaccine.  But the Fed does have the power to create an unlimited supply of dollars – or credibly promise to do so – such that it will always be able to create a falling dollar value and thus rising inflation expectations.  That can reverse spiking real interest rates.  Certainly, the Fed was able to do so in 2008.  This step, in my view, is the one that is the most sorely needed to restore stability to markets.  Thankfully, I believe this is fully within the power of the Fed to deliver – today if it recognized its error.  The longer the Fed delays, the more things are likely to break, in my opinion.  Ultimately, I am confident the Fed will get us to lower real interest rates by raising inflation expectations.  Sooner would be better than later.  But when?

The real economy is still going to have to cope with disruption from the virus.  And don’t forget the damage already done to shale oil with today’s crude oil prices undercutting the economics for so much of the trillions that U.S. shale oil producers invested.  Crude’s crash alone is likely enough to cause extreme credit distress in many markets.  What our markets really don’t need is the additional burden of spiking real rates courtesy of the Fed’s mistakes – but that is exactly what they are getting.

It’s our belief that when this real interest rate crisis peaks and abates, investments in longer-dated, higher quality bonds and precious metals can be among the first to perform strongly for investors, just as they did last cycle.  In recent days, however, these investments were caught up in the forced selling disrupting almost all markets.  History suggests that the forces driving them down are both temporary and reversible and that these investments continue to merit their role in diversifying portfolios.